Almost every home contains a refrigerator. Most people don’t realize they are also sharing their homes with a heat pump. (credit: Id1337x, Wikimedia Commons) 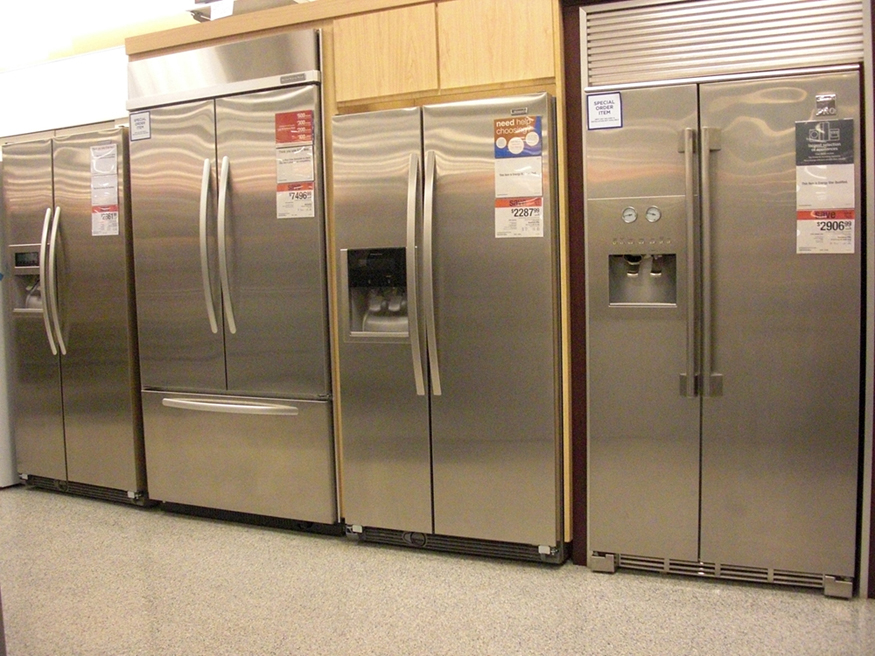 and into a hot one. This requires work input

are positive, with their directions indicated on schematics rather than by sign.) A heat pump’s mission is for heat transfer

to occur into a warm environment, such as a home in the winter. The mission of air conditioners and refrigerators is for heat transfer

to occur from a cool environment, such as chilling a room or keeping food at lower temperatures than the environment. (Actually, a heat pump can be used both to heat and cool a space. It is essentially an air conditioner and a heating unit all in one. In this section we will concentrate on its heating mode.)

Heat pumps, air conditioners, and refrigerators are heat engines operated backward. The one shown here is based on a Carnot (reversible) engine. (a) Schematic diagram showing heat transfer from a cold reservoir to a warm reservoir with a heat pump. The directions of

are opposite what they would be in a heat engine. (b)

diagram for a Carnot cycle similar to that in (Figure) but reversed, following path ADCBA. The area inside the loop is negative, meaning there is a net work input. There is heat transfer

into the system from a cold reservoir along path DC, and heat transfer

out of the system into a hot reservoir along path BA. 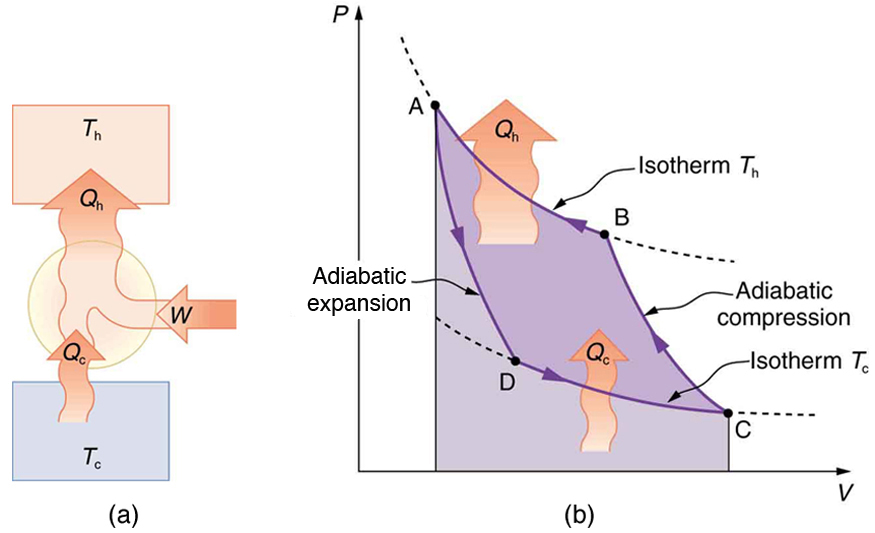 The great advantage of using a heat pump to keep your home warm, rather than just burning fuel, is that a heat pump supplies

. Heat transfer is from the outside air, even at a temperature below freezing, to the indoor space. You only pay for

, and you get an additional heat transfer of

from the outside at no cost; in many cases, at least twice as much energy is transferred to the heated space as is used to run the heat pump. When you burn fuel to keep warm, you pay for all of it. The disadvantage is that the work input (required by the second law of thermodynamics) is sometimes more expensive than simply burning fuel, especially if the work is done by electrical energy.

The basic components of a heat pump in its heating mode are shown in (Figure). A working fluid such as a non-CFC refrigerant is used. In the outdoor coils (the evaporator), heat transfer

occurs to the working fluid from the cold outdoor air, turning it into a gas.

occurs to the working fluid in the evaporator (3) from the colder outdoor air, turning it into a gas. The electrically driven compressor (4) increases the temperature and pressure of the gas and forces it into the condenser coils (1) inside the heated space. Because the temperature of the gas is higher than the temperature in the room, heat transfer from the gas to the room occurs as the gas condenses to a liquid. The working fluid is then cooled as it flows back through an expansion valve (2) to the outdoor evaporator coils. 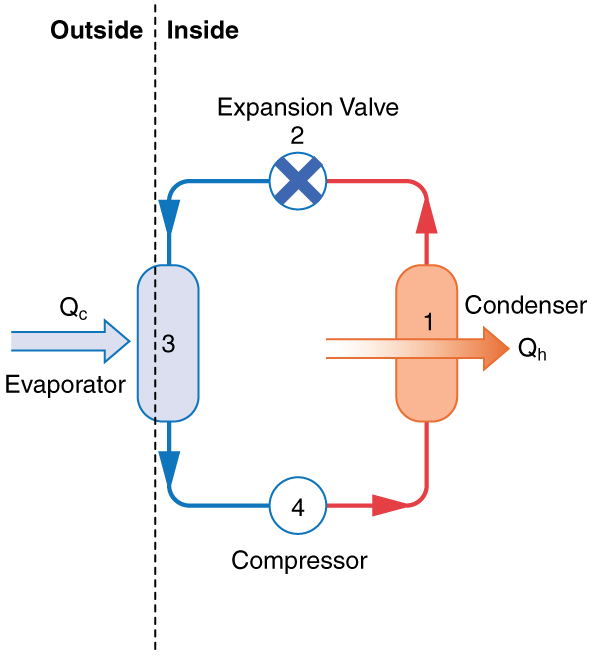 ) raises the temperature and pressure of the gas and forces it into the condenser coils that are inside the heated space. Because the temperature of the gas is higher than the temperature inside the room, heat transfer to the room occurs and the gas condenses to a liquid. The liquid then flows back through a pressure-reducing valve to the outdoor evaporator coils, being cooled through expansion. (In a cooling cycle, the evaporator and condenser coils exchange roles and the flow direction of the fluid is reversed.)

occurs into the warm space compared with how much work input

is required. In the spirit of taking the ratio of what you get to what you spend, we define a heat pump’s coefficient of performance (

Since the efficiency of a heat engine is

, an important and interesting fact. First, since the efficiency of any heat engine is less than 1, it means that

is always greater than 1—that is, a heat pump always has more heat transfer

than work put into it. Second, it means that heat pumps work best when temperature differences are small. The efficiency of a perfect, or Carnot, engine is

). In other words, heat pumps do not work as well in very cold climates as they do in more moderate climates.

Friction and other irreversible processes reduce heat engine efficiency, but they do not benefit the operation of a heat pump—instead, they reduce the work input by converting part of it to heat transfer back into the cold reservoir before it gets into the heat pump.

When a real heat engine is run backward, some of the intended work input

goes into heat transfer before it gets into the heat engine, thereby reducing its coefficient of performance

represents the portion of

that goes into the heat pump, while the remainder of

is lost in the form of frictional heat

to the cold reservoir. If all of

had gone into the heat pump, then

would have been greater. The best heat pump uses adiabatic and isothermal processes, since, in theory, there would be no dissipative processes to reduce the heat transfer to the hot reservoir. 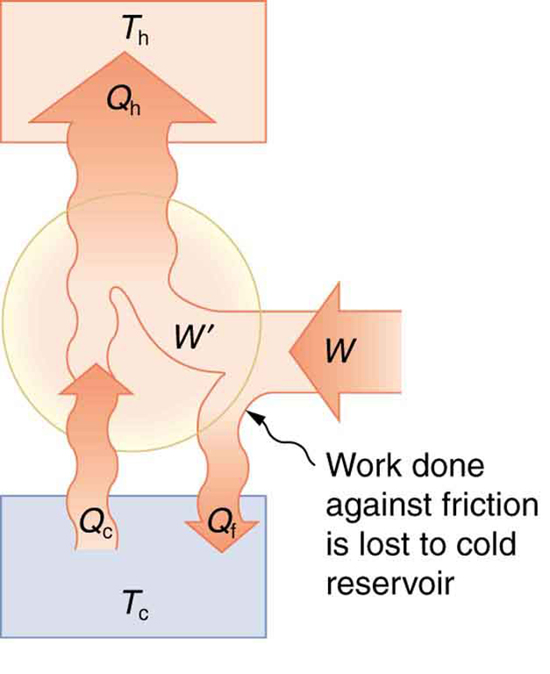 The Best COP hp of a Heat Pump for Home Use

. (See (Figure).) What is the best coefficient of performance possible for such a heat pump, if it has a hot reservoir temperature of

and a cold reservoir temperature of

A Carnot engine reversed will give the best possible performance as a heat pump. As noted above,

, so that we need to first calculate the Carnot efficiency to solve this problem.

Carnot efficiency in terms of absolute temperature is given by:

The temperatures in kelvins are

Thus, from the discussion above, 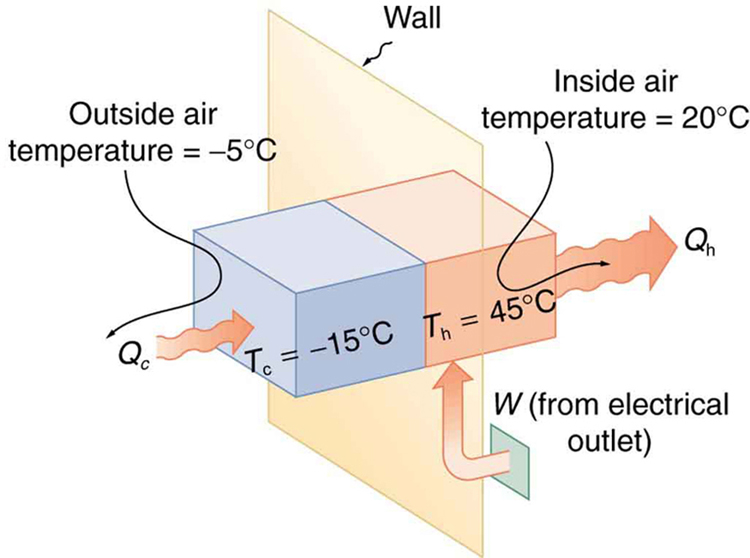 Real heat pumps do not perform quite as well as the ideal one in the previous example; their values of

range from about 2 to 4. This range means that the heat transfer

put into them. Their economical feasibility is still limited, however, since

is usually supplied by electrical energy that costs more per joule than heat transfer by burning fuels like natural gas. Furthermore, the initial cost of a heat pump is greater than that of many furnaces, so that a heat pump must last longer for its cost to be recovered. Heat pumps are most likely to be economically superior where winter temperatures are mild, electricity is relatively cheap, and other fuels are relatively expensive. Also, since they can cool as well as heat a space, they have advantages where cooling in summer months is also desired. Thus some of the best locations for heat pumps are in warm summer climates with cool winters. (Figure) shows a heat pump, called a “reverse cycle” or “split-system cooler” in some countries. 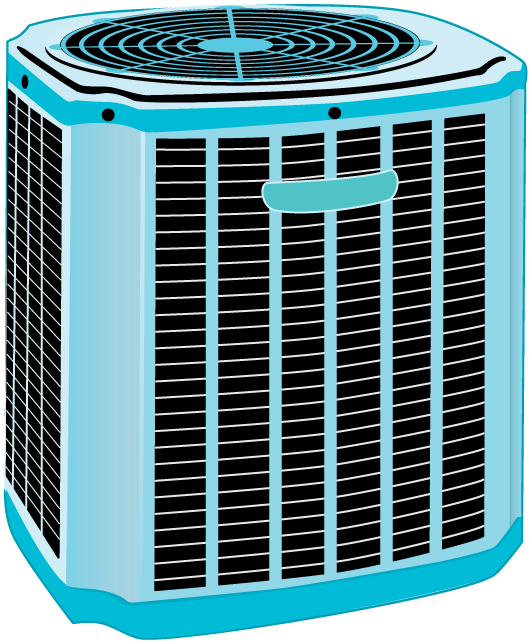 occurs from a cold environment compared with how much work input

is required. What is considered the benefit in a heat pump is considered waste heat in a refrigerator. We thus define the coefficient of performance

of an air conditioner or refrigerator to be

, we can see that an air conditioner will have a lower coefficient of performance than a heat pump, because

. In this module’s Problems and Exercises, you will show that

for a heat engine used as either an air conditioner or a heat pump operating between the same two temperatures. Real air conditioners and refrigerators typically do remarkably well, having values of

ranging from 2 to 6. These numbers are better than the

values for the heat pumps mentioned above, because the temperature differences are smaller, but they are less than those for Carnot engines operating between the same two temperatures.

) has been developed. This rating is an example where non-SI units are still used and relevant to consumers. To make it easier for the consumer, Australia, Canada, New Zealand, and the U.S. use an Energy Star Rating out of 5 stars—the more stars, the more energy efficient the appliance.

are expressed in mixed units of British thermal units (Btu) per hour of heating or cooling divided by the power input in watts. Room air conditioners are readily available with

ranging from 6 to 12. Although not the same as the

are good for comparison purposes—the greater the

, the cheaper an air conditioner is to operate (but the higher its purchase price is likely to be).

of an air conditioner or refrigerator can be expressed as

is the amount of heat transfer from a cold environment in British thermal units,

is time in hours,

is the work input in joules, and

is time in seconds.

Explain why heat pumps do not work as well in very cold climates as they do in milder ones. Is the same true of refrigerators?

In some Northern European nations, homes are being built without heating systems of any type. They are very well insulated and are kept warm by the body heat of the residents. However, when the residents are not at home, it is still warm in these houses. What is a possible explanation?

Why do refrigerators, air conditioners, and heat pumps operate most cost-effectively for cycles with a small difference between

? (Note that the temperatures of the cycle employed are crucial to its

Grocery store managers contend that there is less total energy consumption in the summer if the store is kept at a low temperature. Make arguments to support or refute this claim, taking into account that there are numerous refrigerators and freezers in the store.

Can you cool a kitchen by leaving the refrigerator door open?

to a hot temperature of

Suppose you have an ideal refrigerator that cools an environment at

and has heat transfer to another environment at

. What is its coefficient of performance?

and has heat transfer to the environment at

In a very mild winter climate, a heat pump has heat transfer from an environment at

. What is the best possible coefficient of performance for these temperatures? Explicitly show how you follow the steps in the Problem-Solving Strategies for Thermodynamics.

and a cold reservoir temperature of

? (b) How much heat transfer occurs into the warm environment if

, how does its cost compare with the direct heat transfer achieved by burning natural gas at a cost of 85.0 cents per therm. (A therm is a common unit of energy for natural gas and equals

and has heat transfer to another environment at

? (b) How much work in joules must be done for a heat transfer of 4186 kJ from the cold environment? (c) What is the cost of doing this if the work costs 10.0 cents per

(a kilowatt-hour)? (d) How many kJ of heat transfer occurs into the warm environment? (e) Discuss what type of refrigerator might operate between these temperatures.

, and you would like it to have a coefficient of performance of 7.00. What is the hot reservoir temperature for such a refrigerator?

. What is the cold reservoir temperature if the pump is to have a coefficient of performance of 12.0?

(48,000 British thermal units) from a cold environment in 1.00 h. (a) What energy input in joules is necessary to do this if the air conditioner has an energy efficiency rating (

(one kilowatt-hour)? (c) Discuss whether this cost seems realistic. Note that the energy efficiency rating (

) of an air conditioner or refrigerator is defined to be the number of British thermal units of heat transfer from a cold environment per hour divided by the watts of power input.

(c) This cost seems quite realistic; it says that running an air conditioner all day would cost ?9.59 (if it ran continuously).

Start with the definitions of the

s and the conservation of energy relationship between