One complication arising in two-dimensional collisions is that the objects might rotate before or after their collision. For example, if two ice skaters hook arms as they pass by one another, they will spin in circles. We will not consider such rotation until later, and so for now we arrange things so that no rotation is possible. To avoid rotation, we consider only the scattering of point masses—that is, structureless particles that cannot rotate or spin.

We start by assuming that

is conserved. The simplest collision is one in which one of the particles is initially at rest. (See (Figure).) The best choice for a coordinate system is one with an axis parallel to the velocity of the incoming particle, as shown in (Figure). Because momentum is conserved, the components of momentum along the

will also be conserved, but with the chosen coordinate system,

is initially zero and

is the momentum of the incoming particle. Both facts simplify the analysis. (Even with the simplifying assumptions of point masses, one particle initially at rest, and a convenient coordinate system, we still gain new insights into nature from the analysis of two-dimensional collisions.)

A two-dimensional collision with the coordinate system chosen so that

is initially at rest and

is parallel to the 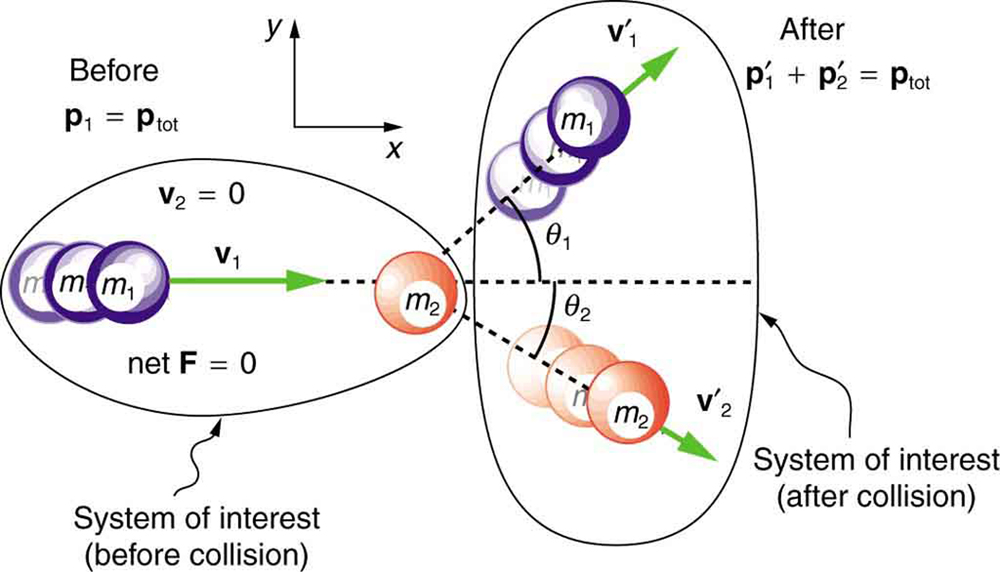 -axis, the equation for conservation of momentum is

Where the subscripts denote the particles and axes and the primes denote the situation after the collision. In terms of masses and velocities, this equation is

But because particle 2 is initially at rest, this equation becomes

The components of the velocities along the

-axis have the form

. Because particle 1 initially moves along the

Conservation of momentum along the

are as shown in (Figure).

Conservation of Momentum along the

-axis, the equation for conservation of momentum is

is zero, because particle 1 initially moves along the

-axis. Because particle 2 is initially at rest,

is also zero. The equation for conservation of momentum along the

The components of the velocities along the

-axis have the form

Thus, conservation of momentum along the

Conservation of Momentum along the

The equations of conservation of momentum along the

-axis are very useful in analyzing two-dimensional collisions of particles, where one is originally stationary (a common laboratory situation). But two equations can only be used to find two unknowns, and so other data may be necessary when collision experiments are used to explore nature at the subatomic level.

Suppose the following experiment is performed. A 0.250-kg object

is slid on a frictionless surface into a dark room, where it strikes an initially stationary object with mass of 0.400 kg

with its incoming direction.

The speed of the 0.250-kg object is originally 2.00 m/s and is 1.50 m/s after the collision. Calculate the magnitude and direction of the velocity

Momentum is conserved because the surface is frictionless. The coordinate system shown in (Figure) is one in which

-axis, so that conservation of momentum along the

Everything is known in these equations except

, which are precisely the quantities we wish to find. We can find two unknowns because we have two independent equations: the equations describing the conservation of momentum in the

and taking the ratio yields an equation (in which θ2 is the only unknown quantity. Applying the identity

Angles are defined as positive in the counter clockwise direction, so this angle indicates that

is scattered to the right in (Figure), as expected (this angle is in the fourth quadrant). Either equation for the

-axis can now be used to solve for

, but the latter equation is easiest because it has fewer terms.

A collision taking place in a dark room is explored in (Figure). The incoming object

is known. By measuring the angle and speed at which

emerges from the room, it is possible to calculate the magnitude and direction of the initially stationary object’s velocity after the collision. 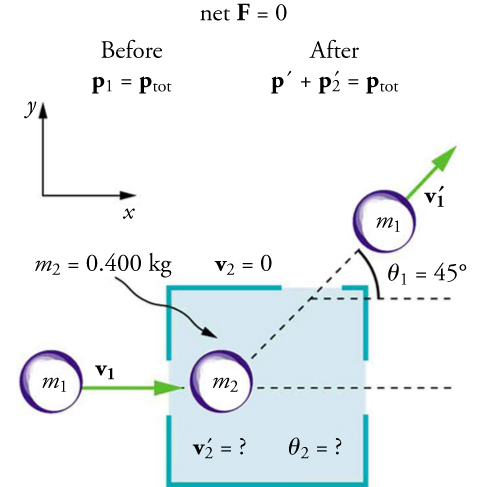 Some interesting situations arise when the two colliding objects have equal mass and the collision is elastic. This situation is nearly the case with colliding billiard balls, and precisely the case with some subatomic particle collisions. We can thus get a mental image of a collision of subatomic particles by thinking about billiards (or pool). (Refer to (Figure) for masses and angles.) First, an elastic collision conserves internal kinetic energy. Again, let us assume object 2

is initially at rest. Then, the internal kinetic energy before and after the collision of two objects that have equal masses is

Because the masses are equal,

. Algebraic manipulation (left to the reader) of conservation of momentum in the

-directions can show that

is negative here.) The two preceding equations can both be true only if

There are three ways that this term can be zero. They are

All three of these ways are familiar occurrences in billiards and pool, although most of us try to avoid the second. If you play enough pool, you will notice that the angle between the balls is very close to

after the collision, although it will vary from this value if a great deal of spin is placed on the ball. (Large spin carries in extra energy and a quantity called angular momentum, which must also be conserved.) The assumption that the scattering of billiard balls is elastic is reasonable based on the correctness of the three results it produces. This assumption also implies that, to a good approximation, momentum is conserved for the two-ball system in billiards and pool. The problems below explore these and other characteristics of two-dimensional collisions.

Connections to Nuclear and Particle Physics

Two-dimensional collision experiments have revealed much of what we know about subatomic particles, as we shall see in Medical Applications of Nuclear Physics and Particle Physics. Ernest Rutherford, for example, discovered the nature of the atomic nucleus from such experiments.

(Figure) shows a cube at rest and a small object heading toward it. (a) Describe the directions (angle

) at which the small object can emerge after colliding elastically with the cube. How does

, the so-called impact parameter? Ignore any effects that might be due to rotation after the collision, and assume that the cube is much more massive than the small object. (b) Answer the same questions if the small object instead collides with a massive sphere.

A small object approaches a collision with a much more massive cube, after which its velocity has the direction

. The angles at which the small object can be scattered are determined by the shape of the object it strikes and the impact parameter 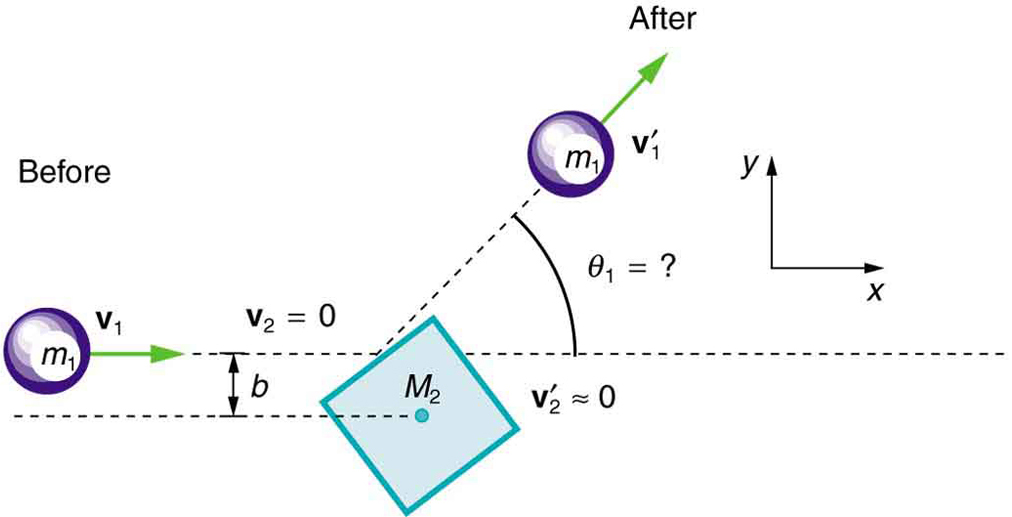 Two identical pucks collide on an air hockey table. One puck was originally at rest. (a) If the incoming puck has a speed of 6.00 m/s and scatters to an angle of

,what is the velocity (magnitude and direction) of the second puck? (You may use the result that

for elastic collisions of objects that have identical masses.) (b) Confirm that the collision is elastic.

(b) Find speed of first puck after collision:

Verify that ratio of initial to final KE equals one:

A 3000-kg cannon is mounted so that it can recoil only in the horizontal direction. (a) Calculate its recoil velocity when it fires a 15.0-kg shell at 480 m/s at an angle of

above the horizontal. (b) What is the kinetic energy of the cannon? This energy is dissipated as heat transfer in shock absorbers that stop its recoil. (c) What happens to the vertical component of momentum that is imparted to the cannon when it is fired?

. The energy of the incoming helium nucleus was

, and the masses of the helium and gold nuclei were

, respectively (note that their mass ratio is 4 to 197). (a) If a helium nucleus scatters to an angle of

Two cars collide at an icy intersection and stick together afterward. The first car has a mass of 1200 kg and is approaching at

due south. The second car has a mass of 850 kg and is approaching at

due west. (a) Calculate the final velocity (magnitude and direction) of the cars. (b) How much kinetic energy is lost in the collision? (This energy goes into deformation of the cars.) Note that because both cars have an initial velocity, you cannot use the equations for conservation of momentum along the

-axis; instead, you must look for other simplifying aspects.

for conservation of momentum in the

-directions and assuming that one object is originally stationary, prove that for an elastic collision of two objects of equal masses,

as discussed in the text.

. The given equations then become:

Square each equation to get

Add these two equations and simplify:

Multiply the entire equation by

to recover the kinetic energy:

A 90.0-kg ice hockey player hits a 0.150-kg puck, giving the puck a velocity of 45.0 m/s. If both are initially at rest and if the ice is frictionless, how far does the player recoil in the time it takes the puck to reach the goal 15.0 m away?

point masses
structureless particles with no rotation or spin