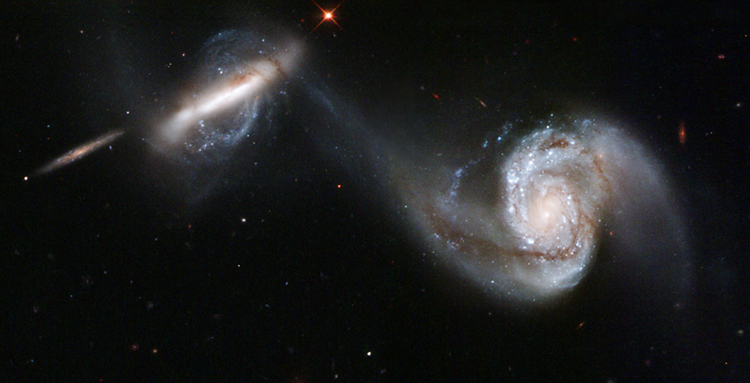 Through the work of scientists in the late 18th century, the main features of the electrostatic force—the existence of two types of charge, the observation that like charges repel, unlike charges attract, and the decrease of force with distance—were eventually refined, and expressed as a mathematical formula. The mathematical formula for the electrostatic force is called Coulomb’s law after the French physicist Charles Coulomb (1736–1806), who performed experiments and first proposed a formula to calculate it.

Coulomb’s law calculates the magnitude of the force

, separated by a distance

. In SI units, the constant

The electrostatic force is a vector quantity and is expressed in units of newtons. The force is understood to be along the line joining the two charges. (See (Figure).)

Although the formula for Coulomb’s law is simple, it was no mean task to prove it. The experiments Coulomb did, with the primitive equipment then available, were difficult. Modern experiments have verified Coulomb’s law to great precision. For example, it has been shown that the force is inversely proportional to distance between two objects squared

to an accuracy of 1 part in

. No exceptions have ever been found, even at the small distances within the atom.

The magnitude of the electrostatic force

separated by a distance

is given by Coulomb’s law. Note that Newton’s third law (every force exerted creates an equal and opposite force) applies as usual—the force on

How Strong is the Coulomb Force Relative to the Gravitational Force?

Compare the electrostatic force between an electron and proton separated by

with the gravitational force between them. This distance is their average separation in a hydrogen atom.

. We then calculate the gravitational force using Newton’s universal law of gravitation. Finally, we take a ratio to see how the forces compare in magnitude.

Thus the Coulomb force is

The charges are opposite in sign, so this is an attractive force. This is a very large force for an electron—it would cause an acceleration of

(verification is left as an end-of-section problem).The gravitational force is given by Newton’s law of gravitation as:

represent the electron and proton masses, which can be found in the appendices. Entering values for the knowns yields

This is a remarkably large ratio! Note that this will be the ratio of electrostatic force to gravitational force for an electron and a proton at any distance (taking the ratio before entering numerical values shows that the distance cancels). This ratio gives some indication of just how much larger the Coulomb force is than the gravitational force between two of the most common particles in nature.

As the example implies, gravitational force is completely negligible on a small scale, where the interactions of individual charged particles are important. On a large scale, such as between the Earth and a person, the reverse is true. Most objects are nearly electrically neutral, and so attractive and repulsive Coulomb forces nearly cancel. Gravitational force on a large scale dominates interactions between large objects because it is always attractive, while Coulomb forces tend to cancel.

(Figure) shows the charge distribution in a water molecule, which is called a polar molecule because it has an inherent separation of charge. Given water’s polar character, explain what effect humidity has on removing excess charge from objects.

Schematic representation of the outer electron cloud of a neutral water molecule. The electrons spend more time near the oxygen than the hydrogens, giving a permanent charge separation as shown. Water is thus a polar molecule. It is more easily affected by electrostatic forces than molecules with uniform charge distributions. 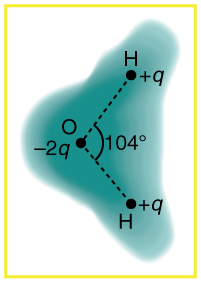 Using (Figure), explain, in terms of Coulomb’s law, why a polar molecule (such as in (Figure)) is attracted by both positive and negative charges.

Given the polar character of water molecules, explain how ions in the air form nucleation centers for rain droplets.

What is the repulsive force between two pith balls that are 8.00 cm apart and have equal charges of – 30.0 nC?

charge and a silk cloth with a

(b) If the charges are distributed over some area, there will be a concentration of charge along the side closest to the oppositely charged object. This effect will increase the net force.

Two point charges exert a 5.00 N force on each other. What will the force become if the distance between them is increased by a factor of three?

Two point charges are brought closer together, increasing the force between them by a factor of 25. By what factor was their separation decreased?

The separation decreased by a factor of 5.

How far apart must two point charges of 75.0 nC (typical of static electricity) be to have a force of 1.00 N between them?

If two equal charges each of 1 C each are separated in air by a distance of 1 km, what is the magnitude of the force acting between them? You will see that even at a distance as large as 1 km, the repulsive force is substantial because 1 C is a very significant amount of charge.

A test charge of

is placed halfway between a charge of

separated by 10 cm. (a) What is the magnitude of the force on the test charge? (b) What is the direction of this force (away from or toward the

Bare free charges do not remain stationary when close together. To illustrate this, calculate the acceleration of two isolated protons separated by 2.00 nm (a typical distance between gas atoms). Explicitly show how you follow the steps in the Problem-Solving Strategy for electrostatics.

Suppose you have a total charge

that you can split in any manner. Once split, the separation distance is fixed. How do you split the charge to achieve the greatest force?

(a) Common transparent tape becomes charged when pulled from a dispenser. If one piece is placed above another, the repulsive force can be great enough to support the top piece’s weight. Assuming equal point charges (only an approximation), calculate the magnitude of the charge if electrostatic force is great enough to support the weight of a 10.0 mg piece of tape held 1.00 cm above another. (b) Discuss whether the magnitude of this charge is consistent with what is typical of static electricity.

(b) This charge is approximately 1 nC, which is consistent with the magnitude of charge typical for static electricity

(a) Find the ratio of the electrostatic to gravitational force between two electrons. (b) What is this ratio for two protons? (c) Why is the ratio different for electrons and protons?

At what distance is the electrostatic force between two protons equal to the weight of one proton?

A certain five cent coin contains 5.00 g of nickel. What fraction of the nickel atoms’ electrons, removed and placed 1.00 m above it, would support the weight of this coin? The atomic mass of nickel is 58.7, and each nickel atom contains 28 electrons and 28 protons.

are placed 0.250 m apart. (a) Where can a third charge be placed so that the net force on it is zero? (b) What if both charges are positive?

apart, and their total charge is

Coulomb force
another term for the electrostatic force