55 Elastic Collisions in One Dimension

Let us consider various types of two-object collisions. These collisions are the easiest to analyze, and they illustrate many of the physical principles involved in collisions. The conservation of momentum principle is very useful here, and it can be used whenever the net external force on a system is zero.

An elastic collision is one that conserves internal kinetic energy. 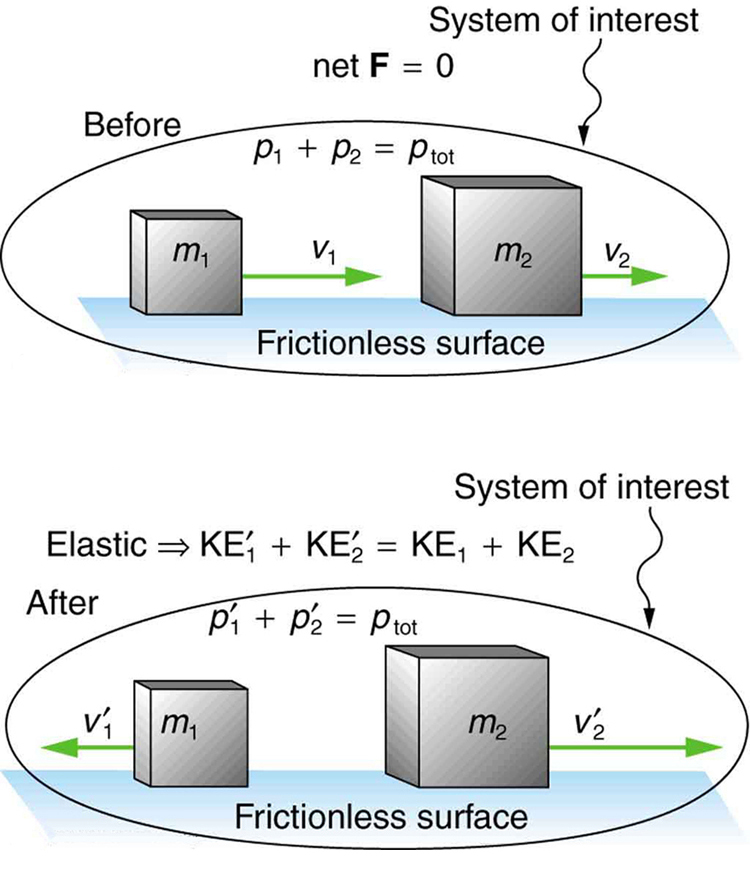 expresses the equation for conservation of internal kinetic energy in a one-dimensional collision.

Calculate the velocities of two objects following an elastic collision, given that

First, visualize what the initial conditions mean—a small object strikes a larger object that is initially at rest. This situation is slightly simpler than the situation shown in (Figure) where both objects are initially moving. We are asked to find two unknowns (the final velocities

). To find two unknowns, we must use two independent equations. Because this collision is elastic, we can use the above two equations. Both can be simplified by the fact that object 2 is initially at rest, and thus

. Once we simplify these equations, we combine them algebraically to solve for the unknowns.

For this problem, note that

and use conservation of momentum. Thus,

Using conservation of internal kinetic energy and that

as an unknown (the algebra is left as an exercise for the reader). There are two solutions to any quadratic equation; in this example, they are

As noted when quadratic equations were encountered in earlier chapters, both solutions may or may not be meaningful. In this case, the first solution is the same as the initial condition. The first solution thus represents the situation before the collision and is discarded. The second solution

is negative, meaning that the first object bounces backward. When this negative value of

is used to find the velocity of the second object after the collision, we get

The result of this example is intuitively reasonable. A small object strikes a larger one at rest and bounces backward. The larger one is knocked forward, but with a low speed. (This is like a compact car bouncing backward off a full-size SUV that is initially at rest.) As a check, try calculating the internal kinetic energy before and after the collision. You will see that the internal kinetic energy is unchanged at 4.00 J. Also check the total momentum before and after the collision; you will find it, too, is unchanged.

The equations for conservation of momentum and internal kinetic energy as written above can be used to describe any one-dimensional elastic collision of two objects. These equations can be extended to more objects if needed.

Find a few ice cubes which are about the same size and a smooth kitchen tabletop or a table with a glass top. Place the ice cubes on the surface several centimeters away from each other. Flick one ice cube toward a stationary ice cube and observe the path and velocities of the ice cubes after the collision. Try to avoid edge-on collisions and collisions with rotating ice cubes. Have you created approximately elastic collisions? Explain the speeds and directions of the ice cubes using momentum.

Investigate collisions on an air hockey table. Set up your own experiments: vary the number of discs, masses and initial conditions. Is momentum conserved? Is kinetic energy conserved? Vary the elasticity and see what happens.

What is an elastic collision?

Two identical objects (such as billiard balls) have a one-dimensional collision in which one is initially motionless. After the collision, the moving object is stationary and the other moves with the same speed as the other originally had. Show that both momentum and kinetic energy are conserved.

Two piloted satellites approach one another at a relative speed of 0.250 m/s, intending to dock. The first has a mass of

, and the second a mass of

. If the two satellites collide elastically rather than dock, what is their final relative velocity?

A 70.0-kg ice hockey goalie, originally at rest, catches a 0.150-kg hockey puck slapped at him at a velocity of 35.0 m/s. Suppose the goalie and the ice puck have an elastic collision and the puck is reflected back in the direction from which it came. What would their final velocities be in this case?