Contact forces, such as between a baseball and a bat, are explained on the small scale by the interaction of the charges in atoms and molecules in close proximity. They interact through forces that include the Coulomb force. Action at a distance is a force between objects that are not close enough for their atoms to “touch.” That is, they are separated by more than a few atomic diameters.

For example, a charged rubber comb attracts neutral bits of paper from a distance via the Coulomb force. It is very useful to think of an object being surrounded in space by a force field. The force field carries the force to another object (called a test object) some distance away.

Concept of a Field

A field is a way of conceptualizing and mapping the force that surrounds any object and acts on another object at a distance without apparent physical connection. For example, the gravitational field surrounding the earth (and all other masses) represents the gravitational force that would be experienced if another mass were placed at a given point within the field.

, its magnitude is given by the equation

, for a point charge (a particle having a charge

) acting on a test charge

(see (Figure)). Both the magnitude and direction of the Coulomb force field depend on

and the test charge

The Coulomb force field due to a positive charge

is shown acting on two different charges. Both charges are the same distance from

is positive, the force

acting on it is repulsive. (b) The charge

is negative and greater in magnitude than

, and so the force

acting on it is attractive and stronger than

. The Coulomb force field is thus not unique at any point in space, because it depends on the test charges

as well as the charge 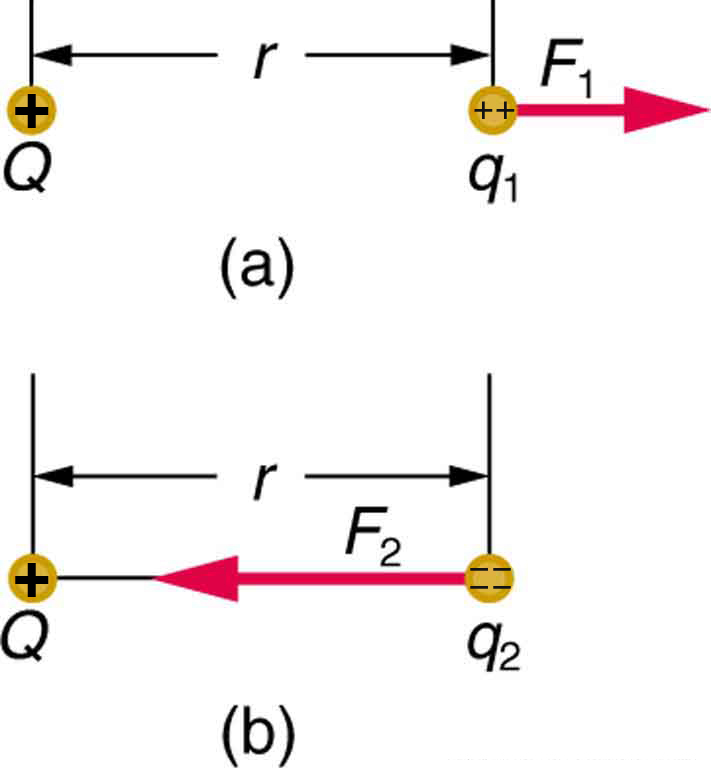 To simplify things, we would prefer to have a field that depends only on

and not on the test charge

is defined to be the ratio of the Coulomb force to the test charge:

. It is understood that

is in the same direction as

. It is also assumed that

is simply obtained by multiplying charge times electric field, or

. Consider the electric field due to a point charge

. According to Coulomb’s law, the force it exerts on a test charge

. Thus the magnitude of the electric field,

, for a point charge is

Since the test charge cancels, we see that

; it is completely independent of the test charge

Calculating the Electric Field of a Point Charge

Calculate the strength and direction of the electric field

m. Entering those values into the above equation gives

This electric field strength is the same at any point 5.00 mm away from the charge

that creates the field. It is positive, meaning that it has a direction pointing away from the charge

Since we know the electric field strength and the charge in the field, the force on that charge can be calculated using the definition of electric field

The magnitude of the force on a charge

exerted by a field of strength

is negative, the force is directed opposite to the direction of the field.

The force is attractive, as expected for unlike charges. (The field was created by a positive charge and here acts on a negative charge.) The charges in this example are typical of common static electricity, and the modest attractive force obtained is similar to forces experienced in static cling and similar situations.

Play ball! Add charges to the Field of Dreams and see how they react to the electric field. Turn on a background electric field and adjust the direction and magnitude.

Why must the test charge

in the definition of the electric field be vanishingly small?

Are the direction and magnitude of the Coulomb force unique at a given point in space? What about the electric field?

upward force on a

charge by a 250 N/C electric field that points due east?

Calculate the magnitude of the electric field 2.00 m from a point charge of 5.00 mC (such as found on the terminal of a Van de Graaff).

Calculate the initial (from rest) acceleration of a proton in a

electric field (such as created by a research Van de Graaff). Explicitly show how you follow the steps in the Problem-Solving Strategy for electrostatics.

westward force on an electron. (b) What magnitude and direction force does this field exert on a proton?

field
a map of the amount and direction of a force acting on other objects, extending out into space