Electric generators induce an emf by rotating a coil in a magnetic field, as briefly discussed in Induced Emf and Magnetic Flux. We will now explore generators in more detail. Consider the following example.

Calculating the Emf Induced in a Generator Coil

When this generator coil is rotated through one-fourth of a revolution, the magnetic flux

changes from its maximum to zero, inducing an emf. 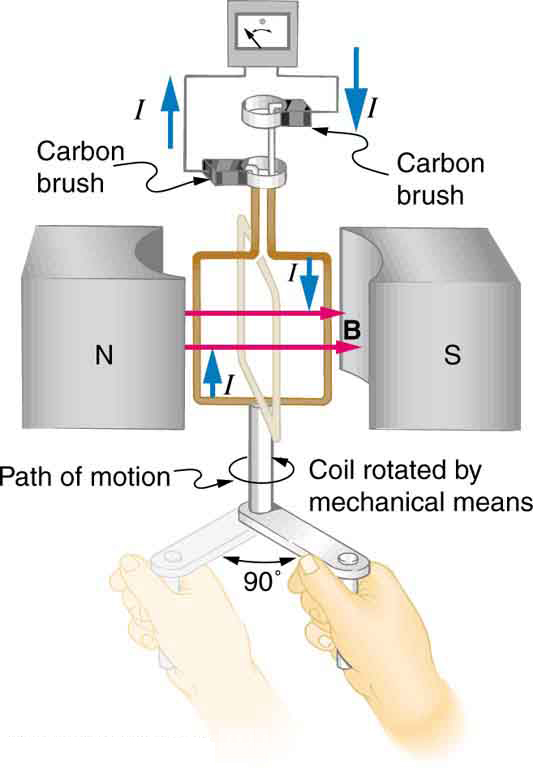 , and so we must determine the change in flux

Since the area of the loop and the magnetic field strength are constant, we see that

, since it was given that

The area of the loop is

This is a practical average value, similar to the 120 V used in household power.

The emf calculated in (Figure) is the average over one-fourth of a revolution. What is the emf at any given instant? It varies with the angle between the magnetic field and a perpendicular to the coil. We can get an expression for emf as a function of time by considering the motional emf on a rotating rectangular coil of width

in a uniform magnetic field, as illustrated in (Figure).

A generator with a single rectangular coil rotated at constant angular velocity in a uniform magnetic field produces an emf that varies sinusoidally in time. Note the generator is similar to a motor, except the shaft is rotated to produce a current rather than the other way around. 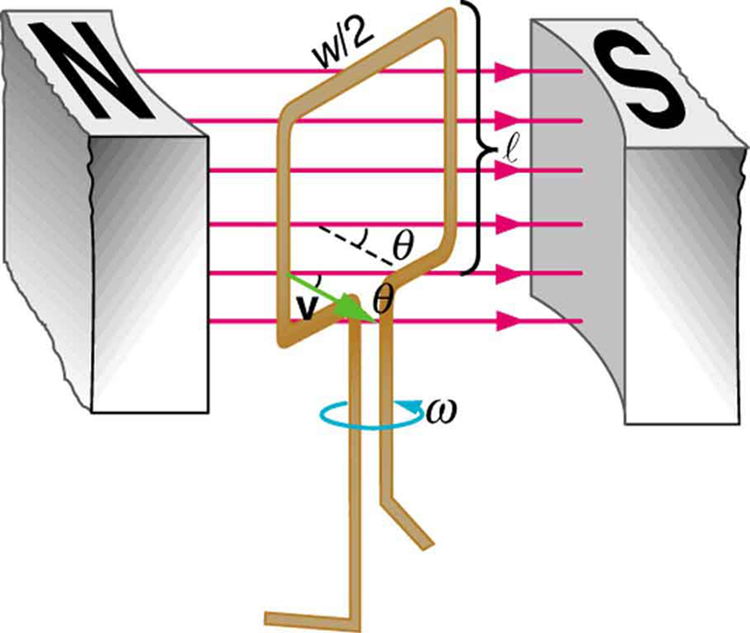 Charges in the wires of the loop experience the magnetic force, because they are moving in a magnetic field. Charges in the vertical wires experience forces parallel to the wire, causing currents. But those in the top and bottom segments feel a force perpendicular to the wire, which does not cause a current. We can thus find the induced emf by considering only the side wires. Motional emf is given to be

, where the velocity v is perpendicular to the magnetic field

. Here the velocity is at an angle

, so that its component perpendicular to

(see (Figure)). Thus in this case the emf induced on each side is

, and they are in the same direction. The total emf around the loop is then

This expression is valid, but it does not give emf as a function of time. To find the time dependence of emf, we assume the coil rotates at a constant angular velocity

is related to angular velocity by

is related to angular velocity

Noting that the area of the loop is

loops, we find that

is the emf induced in a generator coil of

rotating at a constant angular velocity

. This can also be expressed as

is the maximum (peak) emf. Note that the frequency of the oscillation is

, and the period is

. (Figure) shows a graph of emf as a function of time, and it now seems reasonable that AC voltage is sinusoidal.

The emf of a generator is sent to a light bulb with the system of rings and brushes shown. The graph gives the emf of the generator as a function of time.

is the peak emf. The period is

is the frequency. Note that the script E stands for emf. 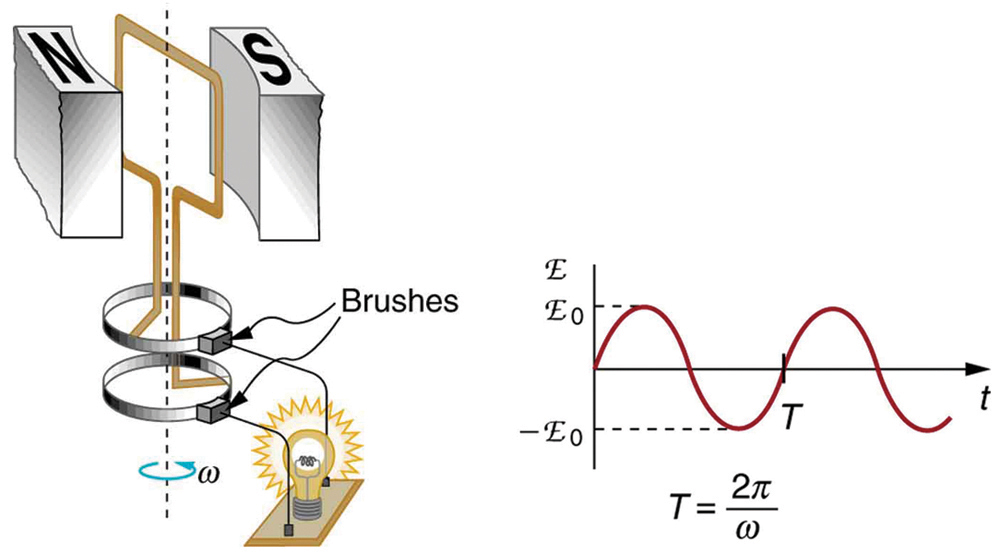 The fact that the peak emf,

, makes good sense. The greater the number of coils, the larger their area, and the stronger the field, the greater the output voltage. It is interesting that the faster the generator is spun (greater

), the greater the emf. This is noticeable on bicycle generators—at least the cheaper varieties. One of the authors as a juvenile found it amusing to ride his bicycle fast enough to burn out his lights, until he had to ride home lightless one dark night.

(Figure) shows a scheme by which a generator can be made to produce pulsed DC. More elaborate arrangements of multiple coils and split rings can produce smoother DC, although electronic rather than mechanical means are usually used to make ripple-free DC. 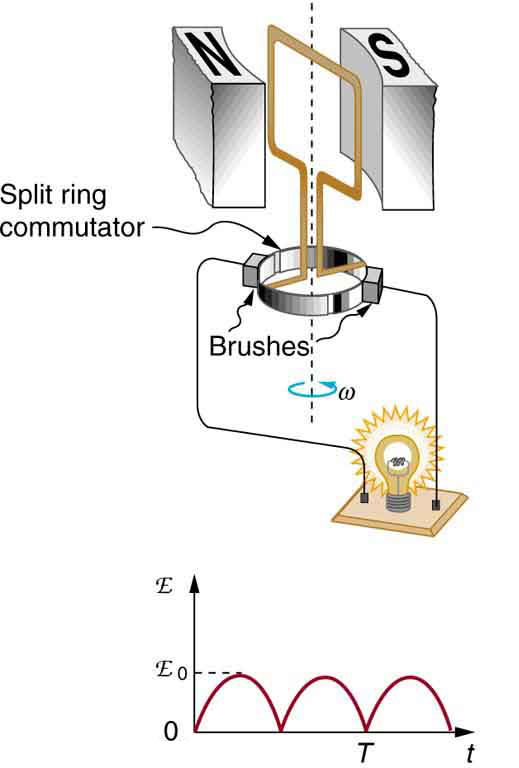 Calculating the Maximum Emf of a Generator

, of the generator that was the subject of (Figure).

, the angular velocity, is determined,

. All other quantities are known.

Angular velocity is defined to be the change in angle per unit time:

One-fourth of a revolution is

and the information from the previous example into

The maximum emf is greater than the average emf of 131 V found in the previous example, as it should be.

In real life, electric generators look a lot different than the figures in this section, but the principles are the same. The source of mechanical energy that turns the coil can be falling water (hydropower), steam produced by the burning of fossil fuels, or the kinetic energy of wind. (Figure) shows a cutaway view of a steam turbine; steam moves over the blades connected to the shaft, which rotates the coil within the generator.

Steam turbine/generator. The steam produced by burning coal impacts the turbine blades, turning the shaft which is connected to the generator. (credit: Nabonaco, Wikimedia Commons) 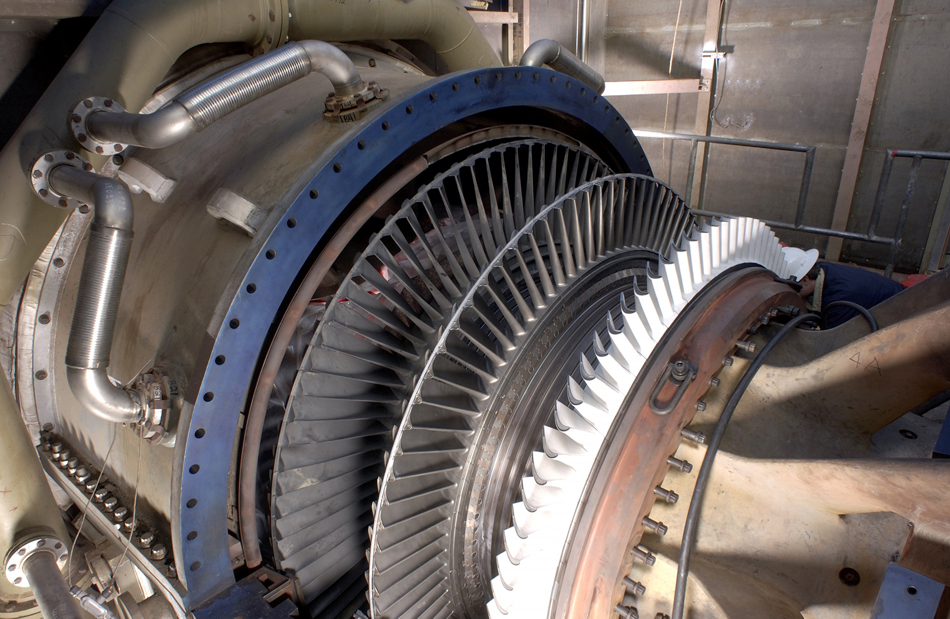 is the area of an

of a generator is

Using RHR-1, show that the emfs in the sides of the generator loop in (Figure) are in the same sense and thus add.

The source of a generator’s electrical energy output is the work done to turn its coils. How is the work needed to turn the generator related to Lenz’s law?

What is the peak emf generated by rotating a 1000-turn, 20.0 cm diameter coil in the Earth’s

magnetic field, given the plane of the coil is originally perpendicular to the Earth’s field and is rotated to be parallel to the field in 10.0 ms?

What is the peak emf generated by a 0.250 m radius, 500-turn coil is rotated one-fourth of a revolution in 4.17 ms, originally having its plane perpendicular to a uniform magnetic field. (This is 60 rev/s.)

(a) A car generator turns at 400 rpm when the engine is idling. Its 300-turn, 5.00 by 8.00 cm rectangular coil rotates in an adjustable magnetic field so that it can produce sufficient voltage even at low rpms. What is the field strength needed to produce a 24.0 V peak emf? (b) Discuss how this required field strength compares to those available in permanent and electromagnets.

(b) This field strength is small enough that it can be obtained using either a permanent magnet or an electromagnet.

Show that if a coil rotates at an angular velocity

, the period of its AC output is

, and increases to its first peak at

area is spun in the Earth’s

field, producing a 12.0 kV maximum emf. (a) At what angular velocity must the coil be spun? (b) What is unreasonable about this result? (c) Which assumption or premise is responsible?

(b) This angular velocity is unreasonably high, higher than can be obtained for any mechanical system.

(c) The assumption that a voltage as great as 12.0 kV could be obtained is unreasonable.

electric generator
a device for converting mechanical work into electric energy; it induces an emf by rotating a coil in a magnetic field

emf induced in a generator coil

is the area of an

, over a period of time