147 Electrical Potential Due to a Point Charge

Point charges, such as electrons, are among the fundamental building blocks of matter. Furthermore, spherical charge distributions (like on a metal sphere) create external electric fields exactly like a point charge. The electric potential due to a point charge is, thus, a case we need to consider. Using calculus to find the work needed to move a test charge

from a large distance away to a distance of

from a point charge

, and noting the connection between work and potential

, it can be shown that the electric potential

of a point charge is

where k is a constant equal to

of a Point Charge

of a point charge is given by

The potential at infinity is chosen to be zero. Thus

for a point charge decreases with distance, whereas

for a point charge decreases with distance squared:

Recall that the electric potential

is a scalar and has no direction, whereas the electric field

is closely associated with energy, a scalar, whereas

is closely associated with force, a vector.

What Voltage Is Produced by a Small Charge on a Metal Sphere?

Charges in static electricity are typically in the nanocoulomb

range. What is the voltage 5.00 cm away from the center of a 1-cm diameter metal sphere that has a

As we have discussed in Electric Charge and Electric Field, charge on a metal sphere spreads out uniformly and produces a field like that of a point charge located at its center. Thus we can find the voltage using the equation

Entering known values into the expression for the potential of a point charge, we obtain

What Is the Excess Charge on a Van de Graaff Generator

A demonstration Van de Graaff generator has a 25.0 cm diameter metal sphere that produces a voltage of 100 kV near its surface. (See (Figure).) What excess charge resides on the sphere? (Assume that each numerical value here is shown with three significant figures.)

The voltage of this demonstration Van de Graaff generator is measured between the charged sphere and ground. Earth’s potential is taken to be zero as a reference. The potential of the charged conducting sphere is the same as that of an equal point charge at its center. 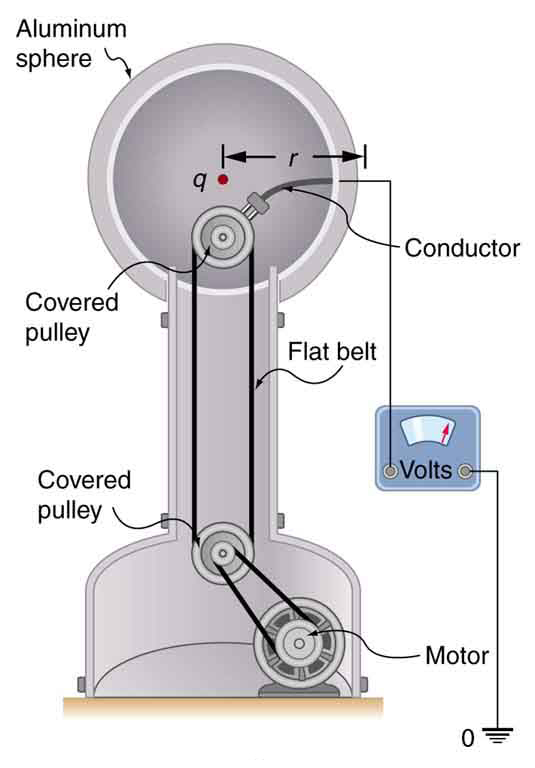 The potential on the surface will be the same as that of a point charge at the center of the sphere, 12.5 cm away. (The radius of the sphere is 12.5 cm.) We can thus determine the excess charge using the equation

This is a relatively small charge, but it produces a rather large voltage. We have another indication here that it is difficult to store isolated charges.

The voltages in both of these examples could be measured with a meter that compares the measured potential with ground potential. Ground potential is often taken to be zero (instead of taking the potential at infinity to be zero). It is the potential difference between two points that is of importance, and very often there is a tacit assumption that some reference point, such as Earth or a very distant point, is at zero potential. As noted in Electric Potential Energy: Potential Difference, this is analogous to taking sea level as

Can the potential of a non-uniformly charged sphere be the same as that of a point charge? Explain.

A 0.500 cm diameter plastic sphere, used in a static electricity demonstration, has a uniformly distributed 40.0 pC charge on its surface. What is the potential near its surface?

What is the potential

from a proton (the average distance between the proton and electron in a hydrogen atom)?

(a) A sphere has a surface uniformly charged with 1.00 C. At what distance from its center is the potential 5.00 MV? (b) What does your answer imply about the practical aspect of isolating such a large charge?

How far from a

point charge will the potential be 100 V? At what distance will it be

If the potential due to a point charge is

at a distance of 15.0 m, what are the sign and magnitude of the charge?

In nuclear fission, a nucleus splits roughly in half. (a) What is the potential

from a fragment that has 46 protons in it? (b) What is the potential energy in MeV of a similarly charged fragment at this distance?

An electrostatic paint sprayer has a 0.200-m-diameter metal sphere at a potential of 25.0 kV that repels paint droplets onto a grounded object. (a) What charge is on the sphere? (b) What charge must a 0.100-mg drop of paint have to arrive at the object with a speed of 10.0 m/s?

In one of the classic nuclear physics experiments at the beginning of the 20th century, an alpha particle was accelerated toward a gold nucleus, and its path was substantially deflected by the Coulomb interaction. If the energy of the doubly charged alpha nucleus was 5.00 MeV, how close to the gold nucleus (79 protons) could it come before being deflected?

point charge? (b) To what location should the point at 20 cm be moved to increase this potential difference by a factor of two?

(a) What is the final speed of an electron accelerated from rest through a voltage of 25.0 MV by a negatively charged Van de Graaff terminal?

(b) What is unreasonable about this result?

(c) Which assumptions are responsible?

(b) This velocity is far too great. It is faster than the speed of light.

(c) The assumption that the speed of the electron is far less than that of light and that the problem does not require a relativistic treatment produces an answer greater than the speed of light.