Rockets range in size from fireworks so small that ordinary people use them to immense Saturn Vs that once propelled massive payloads toward the Moon. The propulsion of all rockets, jet engines, deflating balloons, and even squids and octopuses is explained by the same physical principle—Newton’s third law of motion. Matter is forcefully ejected from a system, producing an equal and opposite reaction on what remains. Another common example is the recoil of a gun. The gun exerts a force on a bullet to accelerate it and consequently experiences an equal and opposite force, causing the gun’s recoil or kick.

(Figure) shows a rocket accelerating straight up. In part (a), the rocket has a mass

relative to Earth, and hence a momentum

has elapsed in which the rocket has ejected a mass

of hot gas at a velocity

relative to the rocket. The remainder of the mass

now has a greater velocity

. The momentum of the entire system (rocket plus expelled gas) has actually decreased because the force of gravity has acted for a time

. (Remember that impulse is the net external force on a system multiplied by the time it acts, and it equals the change in momentum of the system.) So, the center of mass of the system is in free fall but, by rapidly expelling mass, part of the system can accelerate upward. It is a commonly held misconception that the rocket exhaust pushes on the ground. If we consider thrust; that is, the force exerted on the rocket by the exhaust gases, then a rocket’s thrust is greater in outer space than in the atmosphere or on the launch pad. In fact, gases are easier to expel into a vacuum.

By calculating the change in momentum for the entire system over

, and equating this change to the impulse, the following expression can be shown to be a good approximation for the acceleration of the rocket.

“The rocket” is that part of the system remaining after the gas is ejected, and

is the acceleration due to gravity.

Acceleration of a Rocket

Acceleration of a rocket is

is the acceleration of the rocket,

is the exhaust velocity,

is the mass of the rocket,

is the mass of the ejected gas, and

is the time in which the gas is ejected.

(a) This rocket has a mass

and an upward velocity

. The net external force on the system is

, if air resistance is neglected. (b) A time

later the system has two main parts, the ejected gas and the remainder of the rocket. The reaction force on the rocket is what overcomes the gravitational force and accelerates it upward. 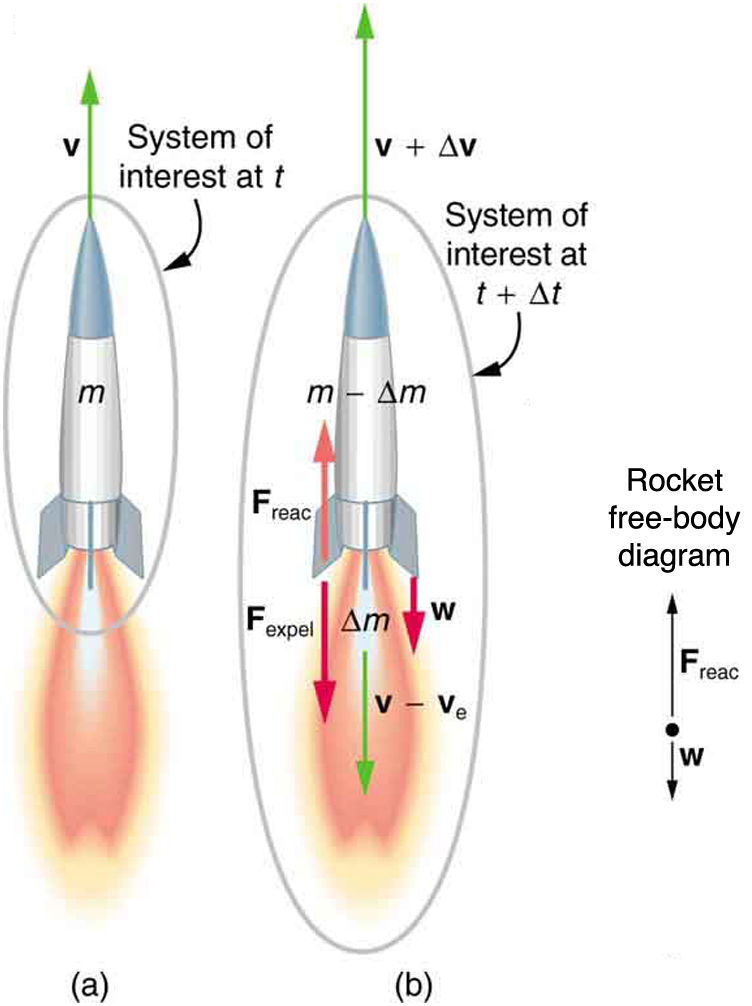 A rocket’s acceleration depends on three major factors, consistent with the equation for acceleration of a rocket . First, the greater the exhaust velocity of the gases relative to the rocket,

, the greater the acceleration is. The practical limit for

for conventional (non-nuclear) hot-gas propulsion systems. The second factor is the rate at which mass is ejected from the rocket. This is the factor

in the equation. The quantity

, with units of newtons, is called “thrust.” The faster the rocket burns its fuel, the greater its thrust, and the greater its acceleration. The third factor is the mass

of the rocket. The smaller the mass is (all other factors being the same), the greater the acceleration. The rocket mass

decreases dramatically during flight because most of the rocket is fuel to begin with, so that acceleration increases continuously, reaching a maximum just before the fuel is exhausted.

A Saturn V’s mass at liftoff was

, its fuel-burn rate was

, and the exhaust velocity was

is the unknown and all of the terms on the right side of the equation are given.

Substituting the given values into the equation for acceleration yields

This value is fairly small, even for an initial acceleration. The acceleration does increase steadily as the rocket burns fuel, because

remain constant. Knowing this acceleration and the mass of the rocket, you can show that the thrust of the engines was

To achieve the high speeds needed to hop continents, obtain orbit, or escape Earth’s gravity altogether, the mass of the rocket other than fuel must be as small as possible. It can be shown that, in the absence of air resistance and neglecting gravity, the final velocity of a one-stage rocket initially at rest is

to what is left

after all of the fuel is exhausted. (Note that

, and assuming an exhaust velocity

Thus, the mass of the rocket is

This result means that only

of the mass is left when the fuel is burnt, and

of the initial mass was fuel. Expressed as percentages, 98.9% of the rocket is fuel, while payload, engines, fuel tanks, and other components make up only 1.10%. Taking air resistance and gravitational force into account, the mass

remaining can only be about

. It is difficult to build a rocket in which the fuel has a mass 180 times everything else. The solution is multistage rockets. Each stage only needs to achieve part of the final velocity and is discarded after it burns its fuel. The result is that each successive stage can have smaller engines and more payload relative to its fuel. Once out of the atmosphere, the ratio of payload to fuel becomes more favorable, too.

The space shuttle was an attempt at an economical vehicle with some reusable parts, such as the solid fuel boosters and the craft itself. (See (Figure)) The shuttle’s need to be operated by humans, however, made it at least as costly for launching satellites as expendable, unpiloted rockets. Ideally, the shuttle would only have been used when human activities were required for the success of a mission, such as the repair of the Hubble space telescope. Rockets with satellites can also be launched from airplanes. Using airplanes has the double advantage that the initial velocity is significantly above zero and a rocket can avoid most of the atmosphere’s resistance.

The space shuttle had a number of reusable parts. Solid fuel boosters on either side were recovered and refueled after each flight, and the entire orbiter returned to Earth for use in subsequent flights. The large liquid fuel tank was expended. The space shuttle was a complex assemblage of technologies, employing both solid and liquid fuel and pioneering ceramic tiles as reentry heat shields. As a result, it permitted multiple launches as opposed to single-use rockets. (credit: NASA) 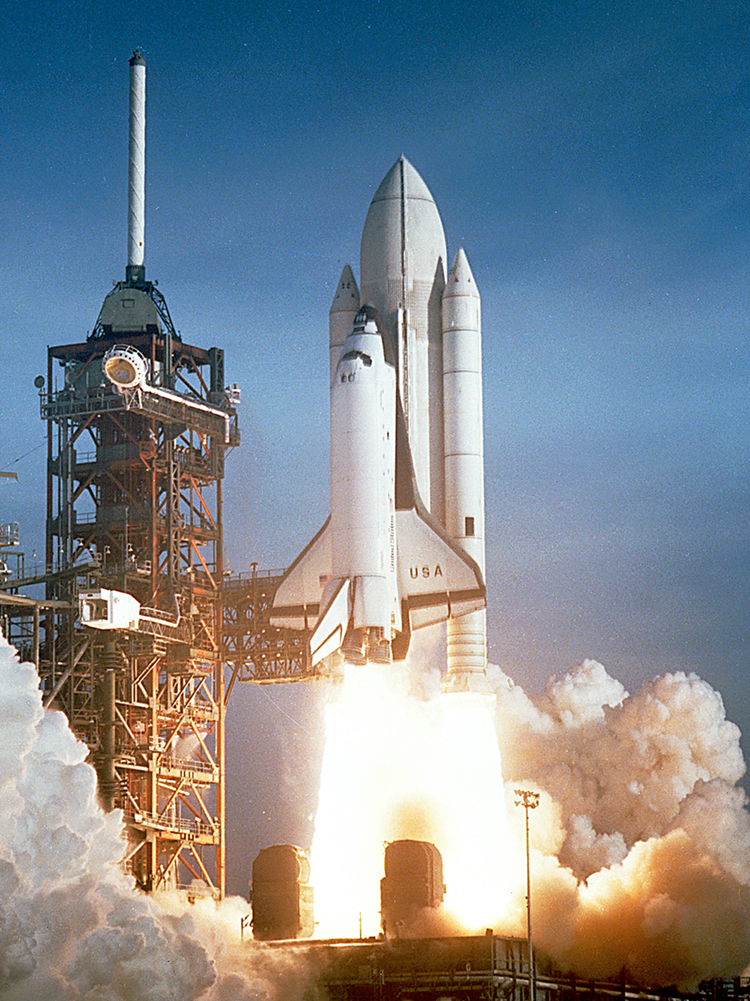 Can you avoid the boulder field and land safely, just before your fuel runs out, as Neil Armstrong did in 1969? Our version of this classic video game accurately simulates the real motion of the lunar lander with the correct mass, thrust, fuel consumption rate, and lunar gravity. The real lunar lander is very hard to control.

Suppose a fireworks shell explodes, breaking into three large pieces for which air resistance is negligible. How is the motion of the center of mass affected by the explosion? How would it be affected if the pieces experienced significantly more air resistance than the intact shell?

During a visit to the International Space Station, an astronaut was positioned motionless in the center of the station, out of reach of any solid object on which he could exert a force. Suggest a method by which he could move himself away from this position, and explain the physics involved.

It is possible for the velocity of a rocket to be greater than the exhaust velocity of the gases it ejects. When that is the case, the gas velocity and gas momentum are in the same direction as that of the rocket. How is the rocket still able to obtain thrust by ejecting the gases?

Antiballistic missiles (ABMs) are designed to have very large accelerations so that they may intercept fast-moving incoming missiles in the short time available. What is the takeoff acceleration of a 10,000-kg ABM that expels 196 kg of gas per second at an exhaust velocity of

, if the rocket expels 8.00 kg of gas per second at an exhaust velocity of

. You may assume the gravitational force is negligible at the probe’s location.

Ion-propulsion rockets have been proposed for use in space. They employ atomic ionization techniques and nuclear energy sources to produce extremely high exhaust velocities, perhaps as great as

. These techniques allow a much more favorable payload-to-fuel ratio. To illustrate this fact: (a) Calculate the increase in velocity of a 20,000-kg space probe that expels only 40.0-kg of its mass at the given exhaust velocity. (b) These engines are usually designed to produce a very small thrust for a very long time—the type of engine that might be useful on a trip to the outer planets, for example. Calculate the acceleration of such an engine if it expels

at the given velocity, assuming the acceleration due to gravity is negligible.

Derive the equation for the vertical acceleration of a rocket.

The force needed to give a small mass

. To accelerate this mass in the small time interval

. By Newton’s third law, this force is equal in magnitude to the thrust force acting on the rocket, so

, where all quantities are positive. Applying Newton’s second law to the rocket gives

is the mass of the rocket and unburnt fuel.

(a) Calculate the maximum rate at which a rocket can expel gases if its acceleration cannot exceed seven times that of gravity. The mass of the rocket just as it runs out of fuel is 75,000-kg, and its exhaust velocity is

. Assume that the acceleration of gravity is the same as on Earth’s surface

. (b) Why might it be necessary to limit the acceleration of a rocket?

Given the following data for a fire extinguisher-toy wagon rocket experiment, calculate the average exhaust velocity of the gases expelled from the extinguisher. Starting from rest, the final velocity is 10.0 m/s. The total mass is initially 75.0 kg and is 70.0 kg after the extinguisher is fired.

How much of a single-stage rocket that is 100,000 kg can be anything but fuel if the rocket is to have a final speed of

, given that it expels gases at an exhaust velocity of

(a) A 5.00-kg squid initially at rest ejects 0.250-kg of fluid with a velocity of 10.0 m/s. What is the recoil velocity of the squid if the ejection is done in 0.100 s and there is a 5.00-N frictional force opposing the squid’s movement. (b) How much energy is lost to work done against friction?

Squids have been reported to jump from the ocean and travel

(measured horizontally) before re-entering the water. (a) Calculate the initial speed of the squid if it leaves the water at an angle of

Consider an astronaut in deep space cut free from her space ship and needing to get back to it. The astronaut has a few packages that she can throw away to move herself toward the ship. Construct a problem in which you calculate the time it takes her to get back by throwing all the packages at one time compared to throwing them one at a time. Among the things to be considered are the masses involved, the force she can exert on the packages through some distance, and the distance to the ship.

Consider an artillery projectile striking armor plating. Construct a problem in which you find the force exerted by the projectile on the plate. Among the things to be considered are the mass and speed of the projectile and the distance over which its speed is reduced. Your instructor may also wish for you to consider the relative merits of depleted uranium versus lead projectiles based on the greater density of uranium.