Just by using our intuition, we can begin to see how rotational quantities like

is large for a long period of time

, then the final angular velocity

and angle of rotation

are large. The wheel’s rotational motion is exactly analogous to the fact that the motorcycle’s large translational acceleration produces a large final velocity, and the distance traveled will also be large.

Kinematics is the description of motion. The kinematics of rotational motion describes the relationships among rotation angle, angular velocity, angular acceleration, and time. Let us start by finding an equation relating

. To determine this equation, we recall a familiar kinematic equation for translational, or straight-line, motion:

Note that in rotational motion

, and we shall use the symbol

for tangential or linear acceleration from now on. As in linear kinematics, we assume

is constant, which means that angular acceleration

is also a constant, because

into the linear equation above:

cancels in the equation, yielding

is the initial angular velocity. This last equation is a kinematic relationship among

—that is, it describes their relationship without reference to forces or masses that may affect rotation. It is also precisely analogous in form to its translational counterpart.

In these equations, the subscript 0 denotes initial values (

are initial values), and the average angular velocity

are defined as follows:

A deep-sea fisherman hooks a big fish that swims away from the boat pulling the fishing line from his fishing reel. The whole system is initially at rest and the fishing line unwinds from the reel at a radius of 4.50 cm from its axis of rotation. The reel is given an angular acceleration of

(a) What is the final angular velocity of the reel?

(b) At what speed is fishing line leaving the reel after 2.00 s elapses?

(c) How many revolutions does the reel make?

(d) How many meters of fishing line come off the reel in this time?

In each part of this example, the strategy is the same as it was for solving problems in linear kinematics. In particular, known values are identified and a relationship is then sought that can be used to solve for the unknown.

needs to be determined. The most straightforward equation to use is

because the unknown is already on one side and all other terms are known. That equation states that

We are also given that

(it starts from rest), so that

is known, the speed

can most easily be found using the relationship

Note again that radians must always be used in any calculation relating linear and angular quantities. Also, because radians are dimensionless, we have

Here, we are asked to find the number of revolutions. Because

, we can find the number of revolutions by finding

in radians. We are given

is zero, so that

can be obtained using

The number of meters of fishing line is

, which can be obtained through its relationship with

This example illustrates that relationships among rotational quantities are highly analogous to those among linear quantities. We also see in this example how linear and rotational quantities are connected. The answers to the questions are realistic. After unwinding for two seconds, the reel is found to spin at 220 rad/s, which is 2100 rpm. (No wonder reels sometimes make high-pitched sounds.) The amount of fishing line played out is 9.90 m, about right for when the big fish bites. 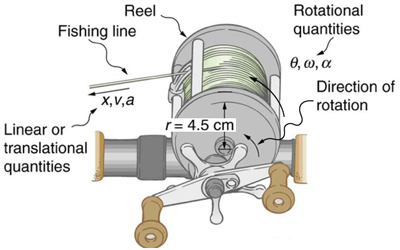 Calculating the Duration When the Fishing Reel Slows Down and Stops

Now let us consider what happens if the fisherman applies a brake to the spinning reel, achieving an angular acceleration of

. How long does it take the reel to come to a stop?

We are asked to find the time

for the reel to come to a stop. The initial and final conditions are different from those in the previous problem, which involved the same fishing reel. Now we see that the initial angular velocity is

and the final angular velocity

is zero. The angular acceleration is given to be

. Examining the available equations, we see all quantities but t are known in

making it easiest to use this equation.

We solve the equation algebraically for t, and then substitute the known values as usual, yielding

Note that care must be taken with the signs that indicate the directions of various quantities. Also, note that the time to stop the reel is fairly small because the acceleration is rather large. Fishing lines sometimes snap because of the accelerations involved, and fishermen often let the fish swim for a while before applying brakes on the reel. A tired fish will be slower, requiring a smaller acceleration.

Calculating the Slow Acceleration of Trains and Their Wheels

. We are given the number of revolutions

, the radius of the wheels

, and the angular acceleration

is very easily found from the relationship between distance and rotation angle:

Before using this equation, we must convert the number of revolutions into radians, because we are dealing with a relationship between linear and rotational quantities:

Now we can substitute the known values into

to find the distance the train moved down the track:

We cannot use any equation that incorporates

, because the equation would have at least two unknown values. The equation

will work, because we know the values for all variables except

We can find the linear velocity of the train,

, through its relationship to

The distance traveled is fairly large and the final velocity is fairly slow (just under 32 km/h).

There is translational motion even for something spinning in place, as the following example illustrates. (Figure) shows a fly on the edge of a rotating microwave oven plate. The example below calculates the total distance it travels.

The image shows a microwave plate. The fly makes revolutions while the food is heated (along with the fly). 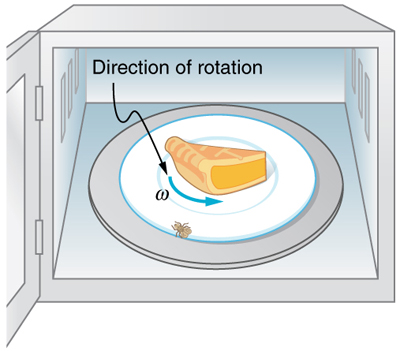 A person decides to use a microwave oven to reheat some lunch. In the process, a fly accidentally flies into the microwave and lands on the outer edge of the rotating plate and remains there. If the plate has a radius of 0.15 m and rotates at 6.0 rpm, calculate the total distance traveled by the fly during a 2.0-min cooking period. (Ignore the start-up and slow-down times.)

, and then the linear distance

As always, it is necessary to convert revolutions to radians before calculating a linear quantity like

Now, using the relationship between

, we can determine the distance traveled:

Rotational kinematics has many useful relationships, often expressed in equation form. Are these relationships laws of physics or are they simply descriptive? (Hint: the same question applies to linear kinematics.)

Rotational kinematics (just like linear kinematics) is descriptive and does not represent laws of nature. With kinematics, we can describe many things to great precision but kinematics does not consider causes. For example, a large angular acceleration describes a very rapid change in angular velocity without any consideration of its cause.

(a) What is its angular acceleration in rad/s2?

(b) How many revolutions does it go through in the process?

Suppose a piece of dust finds itself on a CD. If the spin rate of the CD is 500 rpm, and the piece of dust is 4.3 cm from the center, what is the total distance traveled by the dust in 3 minutes? (Ignore accelerations due to getting the CD rotating.)

A gyroscope slows from an initial rate of 32.0 rad/s at a rate of

(a) How long does it take to come to rest?

(b) How many revolutions does it make before stopping?

During a very quick stop, a car decelerates at

(a) What is the angular acceleration of its 0.280-m-radius tires, assuming they do not slip on the pavement?

(b) How many revolutions do the tires make before coming to rest, given their initial angular velocity is

(c) How long does the car take to stop completely?

(d) What distance does the car travel in this time?

(e) What was the car’s initial velocity?

Yo-yos are amusing toys that display significant physics and are engineered to enhance performance based on physical laws. (credit: Beyond Neon, Flickr) 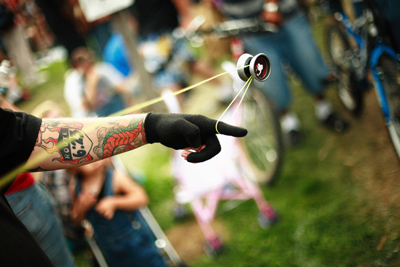 Everyday application: Suppose a yo-yo has a center shaft that has a 0.250 cm radius and that its string is being pulled.

, what is the angular acceleration of the yo-yo?

(b) What is the angular velocity after 0.750 s if it starts from rest?

(c) The outside radius of the yo-yo is 3.50 cm. What is the tangential acceleration of a point on its edge?