174 Magnetic Force on a Current-Carrying Conductor

Because charges ordinarily cannot escape a conductor, the magnetic force on charges moving in a conductor is transmitted to the conductor itself.

The magnetic field exerts a force on a current-carrying wire in a direction given by the right hand rule 1 (the same direction as that on the individual moving charges). This force can easily be large enough to move the wire, since typical currents consist of very large numbers of moving charges.

to be uniform over a length of wire

and zero elsewhere, the total magnetic force on the wire is then

is the number of charge carriers per unit volume and

is the volume of wire in the field. Noting that

is the cross-sectional area of the wire, then the force on the wire is

is the equation for magnetic force on a length

of wire carrying a current

, as shown in (Figure). If we divide both sides of this expression by

, we find that the magnetic force per unit length of wire in a uniform field is

. Then, with the fingers in the direction of

, a perpendicular to the palm points in the direction of

. Its direction is given by RHR-1. 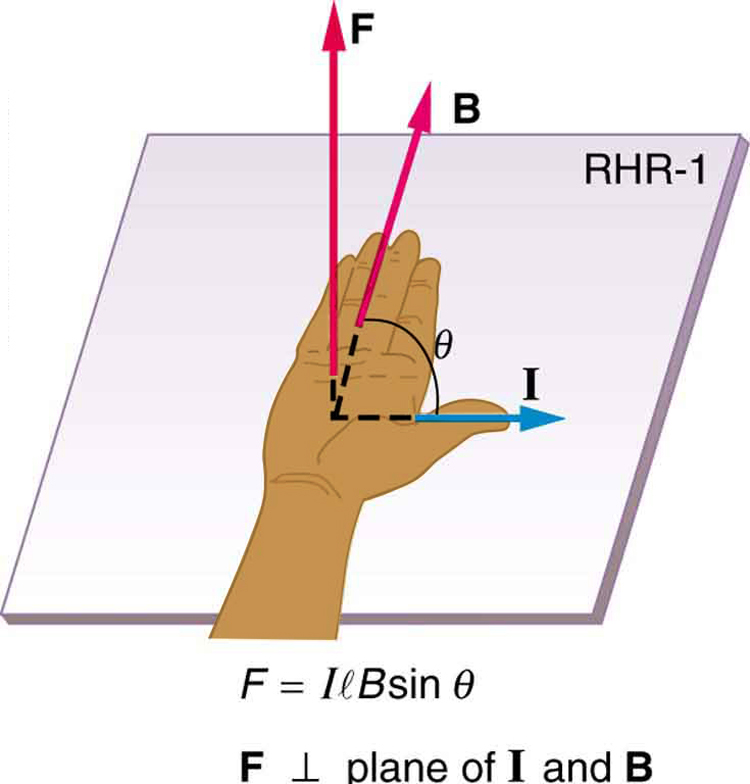 Calculate the force on the wire shown in (Figure), given

The force can be found with the given information by using

and noting that the angle

Entering the given values into

The units for tesla are

This large magnetic field creates a significant force on a small length of wire.

Magnetic force on current-carrying conductors is used to convert electric energy to work. (Motors are a prime example—they employ loops of wire and are considered in the next section.) Magnetohydrodynamics (MHD) is the technical name given to a clever application where magnetic force pumps fluids without moving mechanical parts. (See (Figure).)

Magnetohydrodynamics. The magnetic force on the current passed through this fluid can be used as a nonmechanical pump. 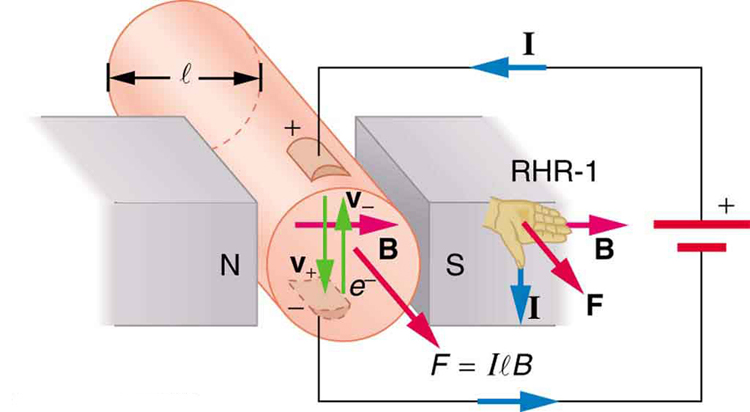 A strong magnetic field is applied across a tube and a current is passed through the fluid at right angles to the field, resulting in a force on the fluid parallel to the tube axis as shown. The absence of moving parts makes this attractive for moving a hot, chemically active substance, such as the liquid sodium employed in some nuclear reactors. Experimental artificial hearts are testing with this technique for pumping blood, perhaps circumventing the adverse effects of mechanical pumps. (Cell membranes, however, are affected by the large fields needed in MHD, delaying its practical application in humans.) MHD propulsion for nuclear submarines has been proposed, because it could be considerably quieter than conventional propeller drives. The deterrent value of nuclear submarines is based on their ability to hide and survive a first or second nuclear strike. As we slowly disassemble our nuclear weapons arsenals, the submarine branch will be the last to be decommissioned because of this ability (See (Figure).) Existing MHD drives are heavy and inefficient—much development work is needed.

An MHD propulsion system in a nuclear submarine could produce significantly less turbulence than propellers and allow it to run more silently. The development of a silent drive submarine was dramatized in the book and the film The Hunt for Red October. 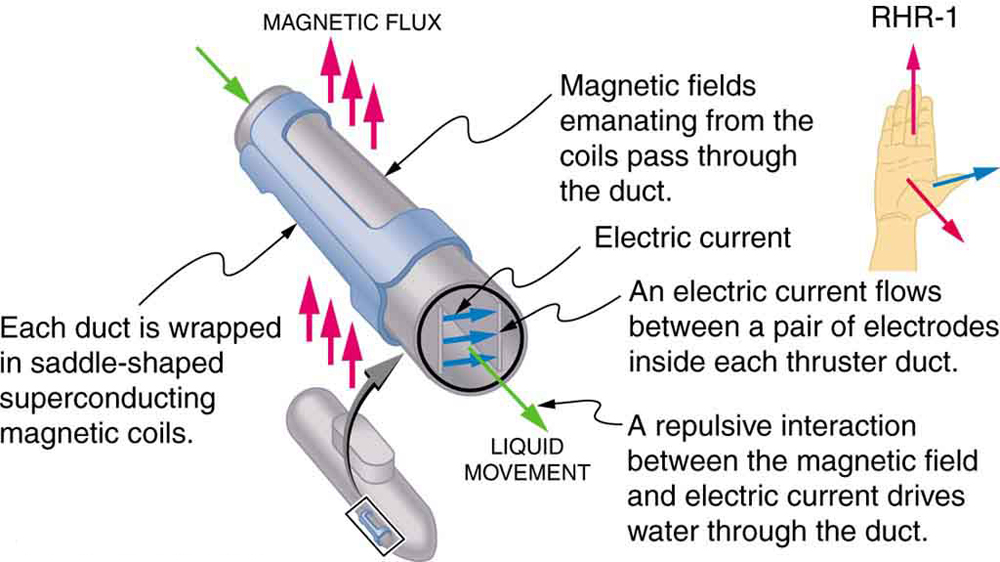 Verify that the direction of the force in an MHD drive, such as that in (Figure), does not depend on the sign of the charges carrying the current across the fluid.

Why would a magnetohydrodynamic drive work better in ocean water than in fresh water? Also, why would superconducting magnets be desirable?

Which is more likely to interfere with compass readings, AC current in your refrigerator or DC current when you start your car? Explain.

What is the direction of the magnetic force on the current in each of the six cases in (Figure)? 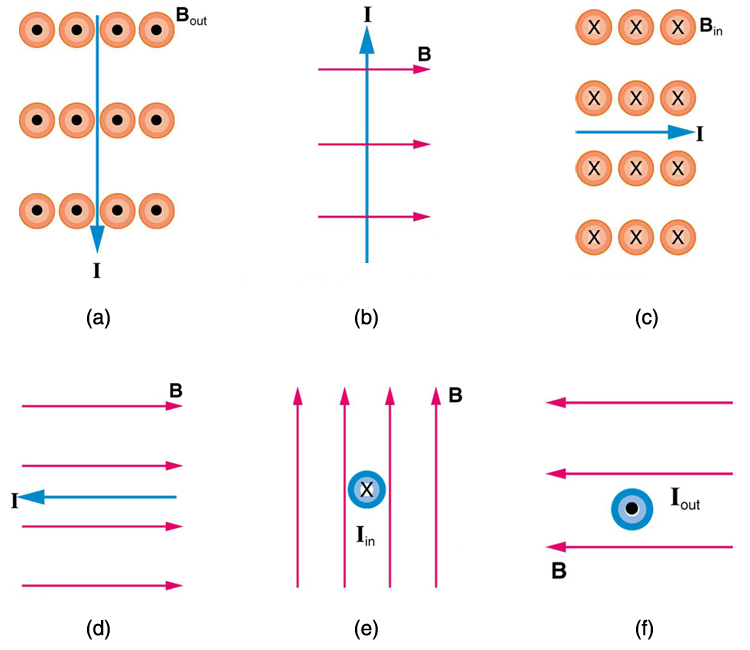 What is the direction of a current that experiences the magnetic force shown in each of the three cases in (Figure), assuming the current runs perpendicular to 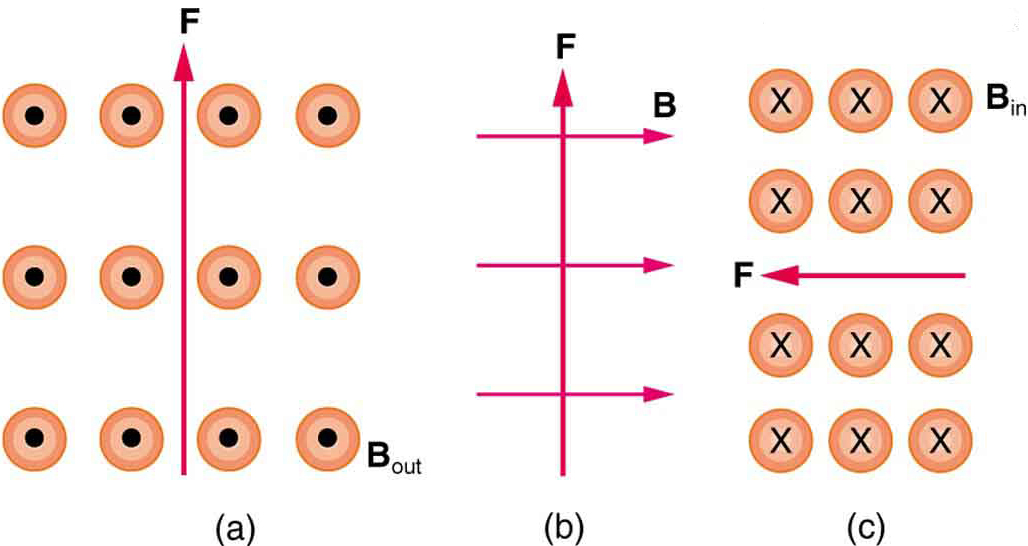 What is the direction of the magnetic field that produces the magnetic force shown on the currents in each of the three cases in (Figure), assuming 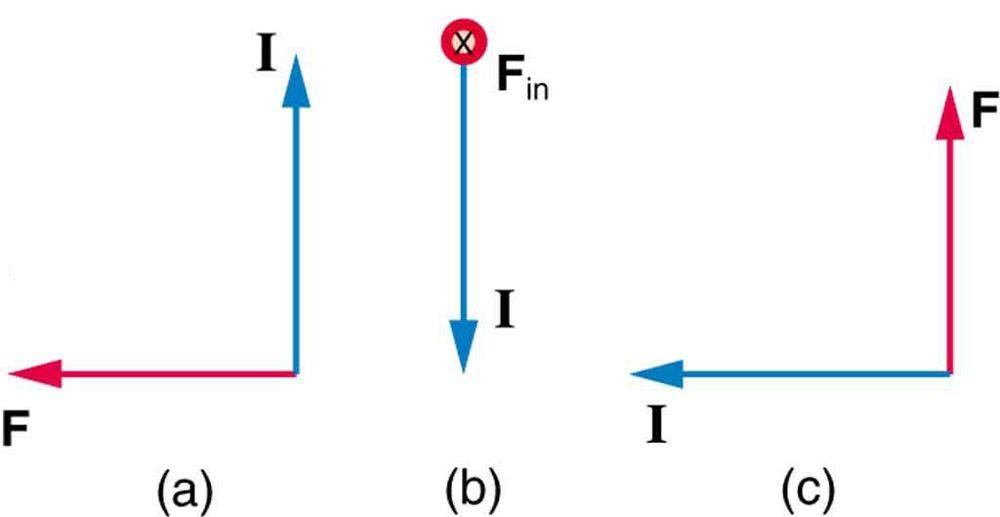 (a) What is the force per meter on a lightning bolt at the equator that carries 20,000 A perpendicular to the Earth’s

field? (b) What is the direction of the force if the current is straight up and the Earth’s field direction is due north, parallel to the ground?

field. What is the force on a 100-m section of this line? (b) Discuss practical concerns this presents, if any.

(b) This is about half a pound of force per 100 m of wire, which is much less than the weight of the wire itself. Therefore, it does not cause any special concerns.

What force is exerted on the water in an MHD drive utilizing a 25.0-cm-diameter tube, if 100-A current is passed across the tube that is perpendicular to a 2.00-T magnetic field? (The relatively small size of this force indicates the need for very large currents and magnetic fields to make practical MHD drives.)

A wire carrying a 30.0-A current passes between the poles of a strong magnet that is perpendicular to its field and experiences a 2.16-N force on the 4.00 cm of wire in the field. What is the average field strength?

(a) A 0.750-m-long section of cable carrying current to a car starter motor makes an angle of

field. What is the current when the wire experiences a force of

? (b) If you run the wire between the poles of a strong horseshoe magnet, subjecting 5.00 cm of it to a 1.75-T field, what force is exerted on this segment of wire?

The force on the rectangular loop of wire in the magnetic field in (Figure) can be used to measure field strength. The field is uniform, and the plane of the loop is perpendicular to the field. (a) What is the direction of the magnetic force on the loop? Justify the claim that the forces on the sides of the loop are equal and opposite, independent of how much of the loop is in the field and do not affect the net force on the loop. (b) If a current of 5.00 A is used, what is the force per tesla on the 20.0-cm-wide loop?

A rectangular loop of wire carrying a current is perpendicular to a magnetic field. The field is uniform in the region shown and is zero outside that region. 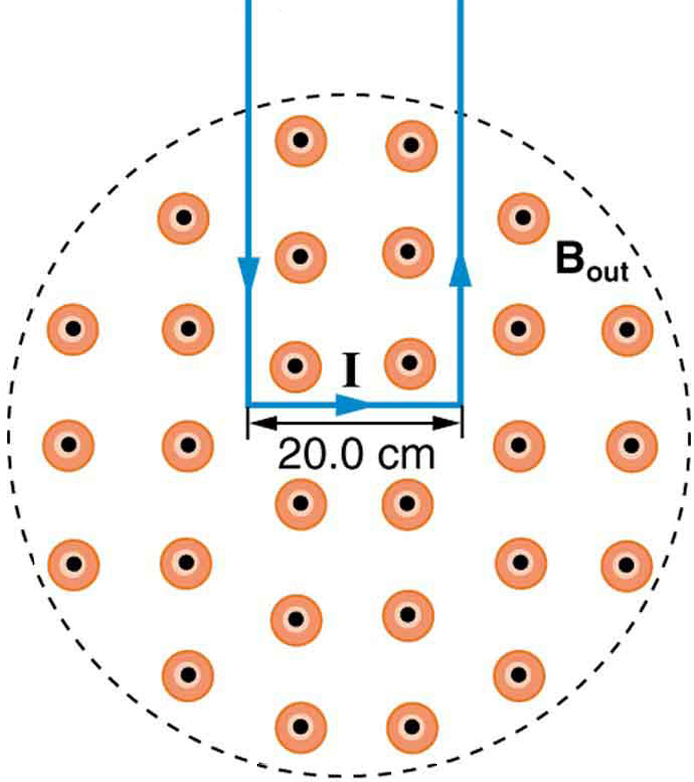