The amount of the happy face erased depends on the path taken by the eraser between points A and B, as does the work done against friction. Less work is done and less of the face is erased for the path in (a) than for the path in (b). The force here is friction, and most of the work goes into thermal energy that subsequently leaves the system (the happy face plus the eraser). The energy expended cannot be fully recovered.

Mechanical energy may not be conserved when nonconservative forces act. For example, when a car is brought to a stop by friction on level ground, it loses kinetic energy, which is dissipated as thermal energy, reducing its mechanical energy. (Figure) compares the effects of conservative and nonconservative forces. We often choose to understand simpler systems such as that described in (Figure)(a) first before studying more complicated systems as in (Figure)(b). 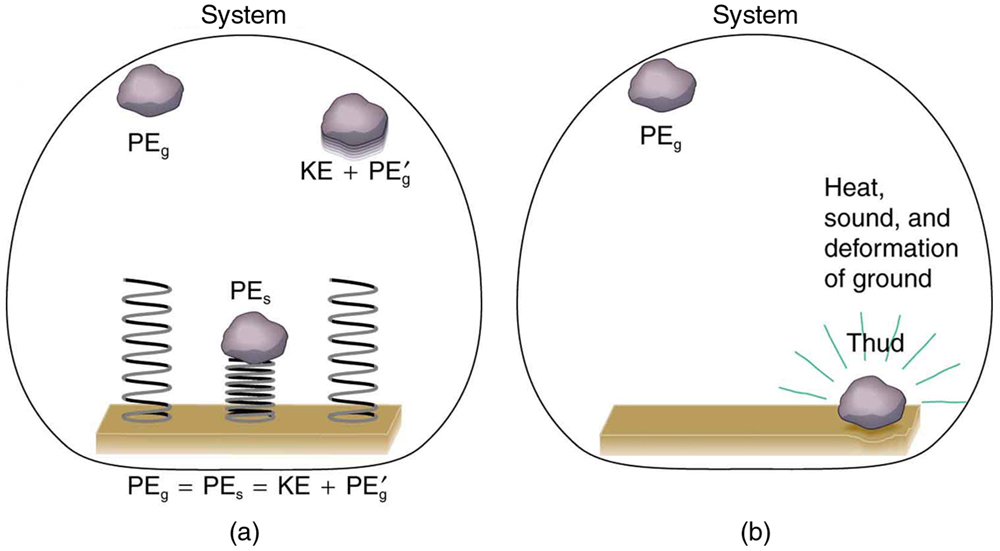 How the Work-Energy Theorem Applies

is the total work done by all nonconservative forces and

is the total work done by all conservative forces.

Consider (Figure), in which a person pushes a crate up a ramp and is opposed by friction. As in the previous section, we note that work done by a conservative force comes from a loss of gravitational potential energy, so that

. Substituting this equation into the previous one and solving for

This equation means that the total mechanical energy

This means that the amount of work done by nonconservative forces adds to the mechanical energy of a system. If

is positive, then mechanical energy is increased, such as when the person pushes the crate up the ramp in (Figure). If

is negative, then mechanical energy is decreased, such as when the rock hits the ground in (Figure)(b). If

is zero, then mechanical energy is conserved, and nonconservative forces are balanced. For example, when you push a lawn mower at constant speed on level ground, your work done is removed by the work of friction, and the mower has a constant energy.

When no change in potential energy occurs, applying

amounts to applying the work-energy theorem by setting the change in kinetic energy to be equal to the net work done on the system, which in the most general case includes both conservative and nonconservative forces. But when seeking instead to find a change in total mechanical energy in situations that involve changes in both potential and kinetic energy, the previous equation

says that you can start by finding the change in mechanical energy that would have resulted from just the conservative forces, including the potential energy changes, and add to it the work done, with the proper sign, by any nonconservative forces involved.

The baseball player slides to a stop in a distance

. In the process, friction removes the player’s kinetic energy by doing an amount of work

equal to the initial kinetic energy.

is in the opposite direction of the motion (that is,

. The equation simplifies to

This equation can now be solved for the distance

Solving the previous equation for

The most important point of this example is that the amount of nonconservative work equals the change in mechanical energy. For example, you must work harder to stop a truck, with its large mechanical energy, than to stop a mosquito.

incline upward with a surface similar to that in the baseball stadium. The player slides with the same initial speed, and the frictional force is still 450 N. Determine how far he slides.

The same baseball player slides to a stop on a

along the hill, with

. This is expressed by the equation

The work done by friction is again

; initially the potential energy is

and the kinetic energy is

; the final energy contributions are

for the kinetic energy and

for the potential energy.

As might have been expected, the player slides a shorter distance by sliding uphill. Note that the problem could also have been solved in terms of the forces directly and the work energy theorem, instead of using the potential energy. This method would have required combining the normal force and force of gravity vectors, which no longer cancel each other because they point in different directions, and friction, to find the net force. You could then use the net force and the net work to find the distance

that reduces the kinetic energy to zero. By applying conservation of energy and using the potential energy instead, we need only consider the gravitational potential energy

, without combining and resolving force vectors. This simplifies the solution considerably.

This experiment involves the conversion of gravitational potential energy into thermal energy. Use the ruler, book, and marble from Take-Home Investigation—Converting Potential to Kinetic Energy. In addition, you will need a foam cup with a small hole in the side, as shown in (Figure). From the 10-cm position on the ruler, let the marble roll into the cup positioned at the bottom of the ruler. Measure the distance

With some simple assumptions, you can use these data to find the coefficient of kinetic friction

of the cup on the table. The force of friction

on the cup is

, where the normal force

is just the weight of the cup plus the marble. The normal force and force of gravity do no work because they are perpendicular to the displacement of the cup, which moves horizontally. The work done by friction is

. You will need the mass of the marble as well to calculate its initial kinetic energy.

Rolling a marble down a ruler into a foam cup.

A 60.0-kg skier with an initial speed of 12.0 m/s coasts up a 2.50-m-high rise as shown in (Figure). Find her final speed at the top, given that the coefficient of friction between her skis and the snow is 0.0800. (Hint: Find the distance traveled up the incline assuming a straight-line path as shown in the figure.)

The skier’s initial kinetic energy is partially used in coasting to the top of a rise.

(a) How high a hill can a car coast up (engine disengaged) if work done by friction is negligible and its initial speed is 110 km/h? (b) If, in actuality, a 750-kg car with an initial speed of 110 km/h is observed to coast up a hill to a height 22.0 m above its starting point, how much thermal energy was generated by friction? (c) What is the average force of friction if the hill has a slope

friction
the force between surfaces that opposes one sliding on the other; friction changes mechanical energy into thermal energy