You have no doubt heard the word pressure being used in relation to blood (high or low blood pressure) and in relation to the weather (high- and low-pressure weather systems). These are only two of many examples of pressures in fluids. Pressure

is a force applied to an area

that is perpendicular to the force.

Pressure is defined as the force divided by the area perpendicular to the force over which the force is applied, or

A given force can have a significantly different effect depending on the area over which the force is exerted, as shown in (Figure). The SI unit for pressure is the pascal, where

In addition to the pascal, there are many other units for pressure that are in common use. In meteorology, atmospheric pressure is often described in units of millibar (mb), where

is still sometimes used as a measure of tire pressure, and millimeters of mercury (mm Hg) is still often used in the measurement of blood pressure. Pressure is defined for all states of matter but is particularly important when discussing fluids.

(a) While the person being poked with the finger might be irritated, the force has little lasting effect. (b) In contrast, the same force applied to an area the size of the sharp end of a needle is great enough to break the skin.

Calculating Force Exerted by the Air: What Force Does a Pressure Exert?

An astronaut is working outside the International Space Station where the atmospheric pressure is essentially zero. The pressure gauge on her air tank reads

. What force does the air inside the tank exert on the flat end of the cylindrical tank, a disk 0.150 m in diameter?

, provided we can find the area

By rearranging the definition of pressure to solve for force, we see that

is given, as is the area of the end of the cylinder

Wow! No wonder the tank must be strong. Since we found

, we see that the force exerted by a pressure is directly proportional to the area acted upon as well as the pressure itself.

The force exerted on the end of the tank is perpendicular to its inside surface. This direction is because the force is exerted by a static or stationary fluid. We have already seen that fluids cannot withstand shearing (sideways) forces; they cannot exert shearing forces, either. Fluid pressure has no direction, being a scalar quantity. The forces due to pressure have well-defined directions: they are always exerted perpendicular to any surface. (See the tire in (Figure), for example.) Finally, note that pressure is exerted on all surfaces. Swimmers, as well as the tire, feel pressure on all sides. (See (Figure).)

Pressure inside this tire exerts forces perpendicular to all surfaces it contacts. The arrows give representative directions and magnitudes of the forces exerted at various points. Note that static fluids do not exert shearing forces. 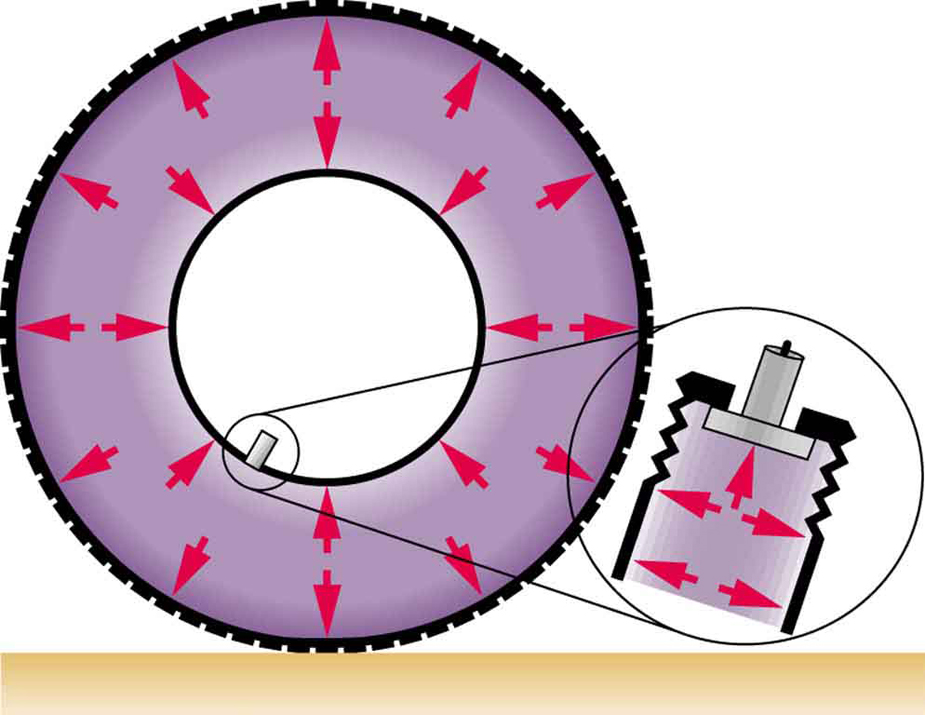 Pressure is exerted on all sides of this swimmer, since the water would flow into the space he occupies if he were not there. The arrows represent the directions and magnitudes of the forces exerted at various points on the swimmer. Note that the forces are larger underneath, due to greater depth, giving a net upward or buoyant force that is balanced by the weight of the swimmer.

Pump gas molecules to a box and see what happens as you change the volume, add or remove heat, change gravity, and more. Measure the temperature and pressure, and discover how the properties of the gas vary in relation to each other. Click to open media in new browser.

How is pressure related to the sharpness of a knife and its ability to cut?

Why does a dull hypodermic needle hurt more than a sharp one?

The outward force on one end of an air tank was calculated in (Figure). How is this force balanced? (The tank does not accelerate, so the force must be balanced.)

Why is force exerted by static fluids always perpendicular to a surface?

In a remote location near the North Pole, an iceberg floats in a lake. Next to the lake (assume it is not frozen) sits a comparably sized glacier sitting on land. If both chunks of ice should melt due to rising global temperatures (and the melted ice all goes into the lake), which ice chunk would give the greatest increase in the level of the lake water, if any?

How do jogging on soft ground and wearing padded shoes reduce the pressures to which the feet and legs are subjected?

Toe dancing (as in ballet) is much harder on toes than normal dancing or walking. Explain in terms of pressure.

How do you convert pressure units like millimeters of mercury, centimeters of water, and inches of mercury into units like newtons per meter squared without resorting to a table of pressure conversion factors?

As a woman walks, her entire weight is momentarily placed on one heel of her high-heeled shoes. Calculate the pressure exerted on the floor by the heel if it has an area of

and the woman’s mass is 55.0 kg. Express the pressure in Pa. (In the early days of commercial flight, women were not allowed to wear high-heeled shoes because aircraft floors were too thin to withstand such large pressures.)

The pressure exerted by a phonograph needle on a record is surprisingly large. If the equivalent of 1.00 g is supported by a needle, the tip of which is a circle 0.200 mm in radius, what pressure is exerted on the record in

Nail tips exert tremendous pressures when they are hit by hammers because they exert a large force over a small area. What force must be exerted on a nail with a circular tip of 1.00 mm diameter to create a pressure of

(This high pressure is possible because the hammer striking the nail is brought to rest in such a short distance.)

pressure
the force per unit area perpendicular to the force, over which the force acts