We can get a good understanding of electromagnetic waves (EM) by considering how they are produced. Whenever a current varies, associated electric and magnetic fields vary, moving out from the source like waves. Perhaps the easiest situation to visualize is a varying current in a long straight wire, produced by an AC generator at its center, as illustrated in (Figure).

This long straight gray wire with an AC generator at its center becomes a broadcast antenna for electromagnetic waves. Shown here are the charge distributions at four different times. The electric field (

) propagates away from the antenna at the speed of light, forming part of an electromagnetic wave. 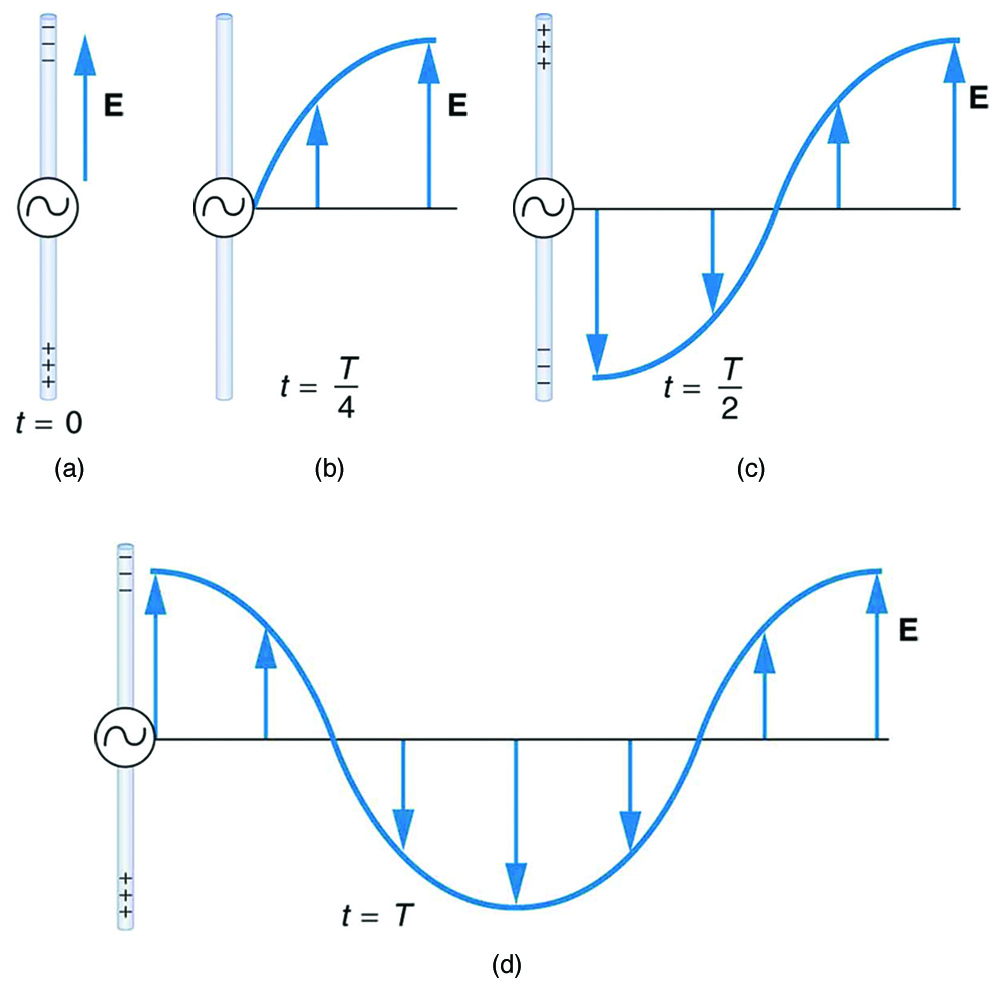 ) shown surrounding the wire is produced by the charge distribution on the wire. Both the

and the charge distribution vary as the current changes. The changing field propagates outward at the speed of light.

There is an associated magnetic field (

) which propagates outward as well (see (Figure)). The electric and magnetic fields are closely related and propagate as an electromagnetic wave. This is what happens in broadcast antennae such as those in radio and TV stations.

Closer examination of the one complete cycle shown in (Figure) reveals the periodic nature of the generator-driven charges oscillating up and down in the antenna and the electric field produced. At time

-field) in the upward direction. One-fourth of a cycle later, there is no charge separation and the field next to the antenna is zero, while the maximum

-field has moved away at speed

As the process continues, the charge separation reverses and the field reaches its maximum downward value, returns to zero, and rises to its maximum upward value at the end of one complete cycle. The outgoing wave has an amplitude proportional to the maximum separation of charge. Its wavelength

is proportional to the period of the oscillation and, hence, is smaller for short periods or high frequencies. (As usual, wavelength and frequency

Electric and Magnetic Waves: Moving Together

Following Ampere’s law, current in the antenna produces a magnetic field, as shown in (Figure). The relationship between

is shown at one instant in (Figure) (a). As the current varies, the magnetic field varies in magnitude and direction.

) produces the separation of charge along the wire, which in turn creates the electric field as shown. (b) The electric and magnetic fields (

) near the wire are perpendicular; they are shown here for one point in space. (c) The magnetic field varies with current and propagates away from the antenna at the speed of light.

The magnetic field lines also propagate away from the antenna at the speed of light, forming the other part of the electromagnetic wave, as seen in (Figure) (b). The magnetic part of the wave has the same period and wavelength as the electric part, since they are both produced by the same movement and separation of charges in the antenna.

A part of the electromagnetic wave sent out from the antenna at one instant in time. The electric and magnetic fields (

) are in phase, and they are perpendicular to one another and the direction of propagation. For clarity, the waves are shown only along one direction, but they propagate out in other directions too. 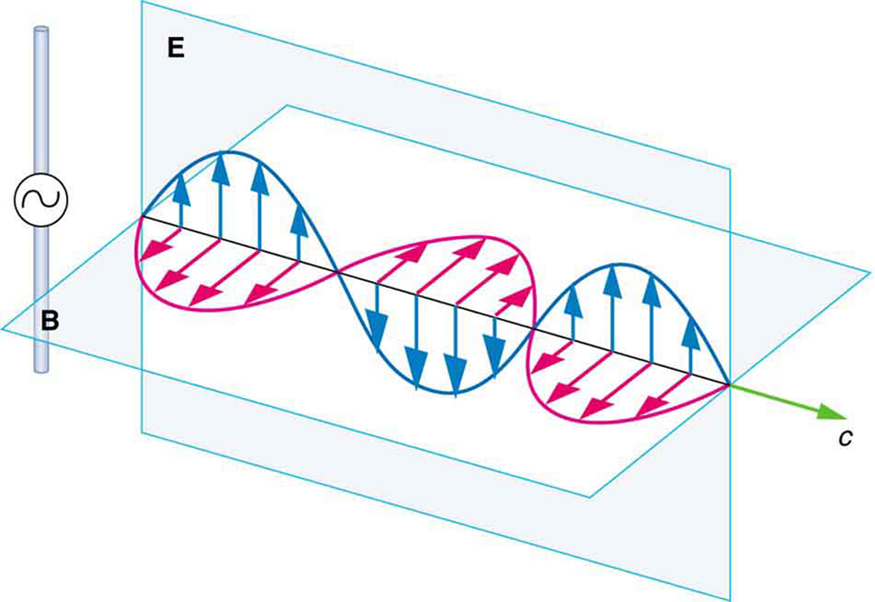 Electromagnetic waves generally propagate out from a source in all directions, sometimes forming a complex radiation pattern. A linear antenna like this one will not radiate parallel to its length, for example. The wave is shown in one direction from the antenna in (Figure) to illustrate its basic characteristics.

Instead of the AC generator, the antenna can also be driven by an AC circuit. In fact, charges radiate whenever they are accelerated. But while a current in a circuit needs a complete path, an antenna has a varying charge distribution forming a standing wave, driven by the AC. The dimensions of the antenna are critical for determining the frequency of the radiated electromagnetic waves. This is a resonant phenomenon and when we tune radios or TV, we vary electrical properties to achieve appropriate resonant conditions in the antenna.

Electromagnetic waves carry energy away from their source, similar to a sound wave carrying energy away from a standing wave on a guitar string. An antenna for receiving EM signals works in reverse. And like antennas that produce EM waves, receiver antennas are specially designed to resonate at particular frequencies.

An incoming electromagnetic wave accelerates electrons in the antenna, setting up a standing wave. If the radio or TV is switched on, electrical components pick up and amplify the signal formed by the accelerating electrons. The signal is then converted to audio and/or video format. Sometimes big receiver dishes are used to focus the signal onto an antenna.

In fact, charges radiate whenever they are accelerated. When designing circuits, we often assume that energy does not quickly escape AC circuits, and mostly this is true. A broadcast antenna is specially designed to enhance the rate of electromagnetic radiation, and shielding is necessary to keep the radiation close to zero. Some familiar phenomena are based on the production of electromagnetic waves by varying currents. Your microwave oven, for example, sends electromagnetic waves, called microwaves, from a concealed antenna that has an oscillating current imposed on it.

There is a relationship between the

-field strengths in an electromagnetic wave. This can be understood by again considering the antenna just described. The stronger the

-field strength, the two should be directly proportional. It can be shown that the magnitudes of the fields do have a constant ratio, equal to the speed of light. That is,

is the ratio of

-field strength in any electromagnetic wave. This is true at all times and at all locations in space. A simple and elegant result.

-Field Strength in an Electromagnetic Wave

What is the maximum strength of the

-field in an electromagnetic wave that has a maximum

-field strength, we rearrange the above equation to solve for

is the speed of light. Entering these into the expression for

Where T stands for Tesla, a measure of magnetic field strength.

The result of this example is consistent with the statement made in the module Maxwell’s Equations: Electromagnetic Waves Predicted and Observed that changing electric fields create relatively weak magnetic fields. They can be detected in electromagnetic waves, however, by taking advantage of the phenomenon of resonance, as Hertz did. A system with the same natural frequency as the electromagnetic wave can be made to oscillate. All radio and TV receivers use this principle to pick up and then amplify weak electromagnetic waves, while rejecting all others not at their resonant frequency.

For your TV or radio at home, identify the antenna, and sketch its shape. If you don’t have cable, you might have an outdoor or indoor TV antenna. Estimate its size. If the TV signal is between 60 and 216 MHz for basic channels, then what is the wavelength of those EM waves?

Try tuning the radio and note the small range of frequencies at which a reasonable signal for that station is received. (This is easier with digital readout.) If you have a car with a radio and extendable antenna, note the quality of reception as the length of the antenna is changed.

Broadcast radio waves from KPhET. Wiggle the transmitter electron manually or have it oscillate automatically. Display the field as a curve or vectors. The strip chart shows the electron positions at the transmitter and at the receiver.

is a positive test charge.

Is the direction of the magnetic field shown in (Figure) (a) consistent with the right-hand rule for current (RHR-2) in the direction shown in the figure?

Why is the direction of the current shown in each part of (Figure) opposite to the electric field produced by the wire’s charge separation?

In which situation shown in (Figure) will the electromagnetic wave be more successful in inducing a current in the wire? Explain.

In which situation shown in (Figure) will the electromagnetic wave be more successful in inducing a current in the loop? Explain.

Should the straight wire antenna of a radio be vertical or horizontal to best receive radio waves broadcast by a vertical transmitter antenna? How should a loop antenna be aligned to best receive the signals? (Note that the direction of the loop that produces the best reception can be used to determine the location of the source. It is used for that purpose in tracking tagged animals in nature studies, for example.)

Under what conditions might wires in a DC circuit emit electromagnetic waves?

Give an example of interference of electromagnetic waves.

An overhead view of two radio broadcast antennas sending the same signal, and the interference pattern they produce. 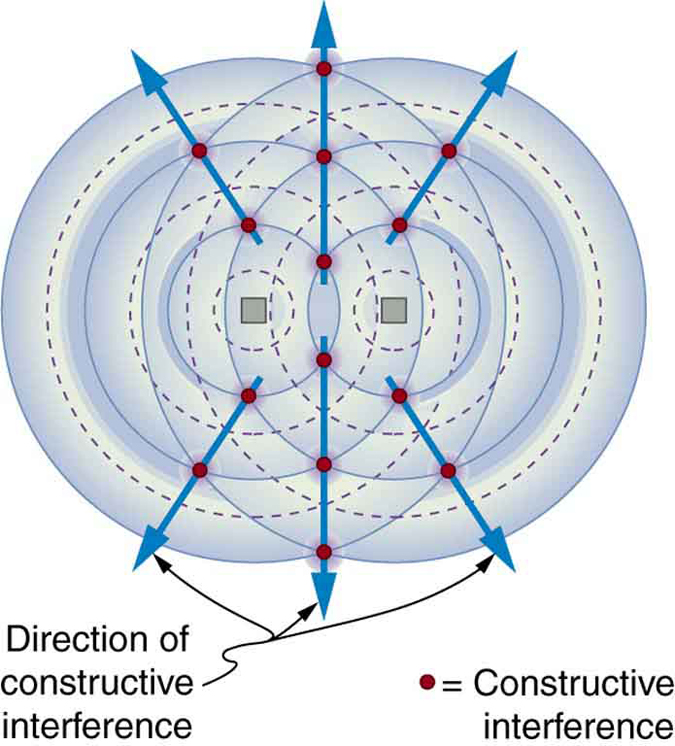 Can an antenna be any length? Explain your answer.

. Calculate the maximum electric field strength if the wave is traveling in a medium in which the speed of the wave is

in (Figure) (using the equation

electric field
a vector quantity (E); the lines of electric force per unit charge, moving radially outward from a positive charge and in toward a negative charge

magnetic field
a vector quantity (B); can be used to determine the magnetic force on a moving charged particle

transverse wave
a wave, such as an electromagnetic wave, which oscillates perpendicular to the axis along the line of travel

standing wave
a wave that oscillates in place, with nodes where no motion happens

amplitude
the height, or magnitude, of an electromagnetic wave

oscillate
to fluctuate back and forth in a steady beat