Suppose an inductor is connected directly to an AC voltage source, as shown in (Figure). It is reasonable to assume negligible resistance, since in practice we can make the resistance of an inductor so small that it has a negligible effect on the circuit. Also shown is a graph of voltage and current as functions of time.

(a) An AC voltage source in series with an inductor having negligible resistance. (b) Graph of current and voltage across the inductor as functions of time.

AC Voltage in an Inductor

When a sinusoidal voltage is applied to an inductor, the voltage leads the current by one-fourth of a cycle, or by a

Current lags behind voltage, since inductors oppose change in current. Changing current induces a back emf

. This is considered to be an effective resistance of the inductor to AC. The rms current

is given by a version of Ohm’s law:

is the rms voltage across the inductor and

is defined to be

the frequency of the AC voltage source in hertz (An analysis of the circuit using Kirchhoff’s loop rule and calculus actually produces this expression).

is called the inductive reactance, because the inductor reacts to impede the current.

has units of ohms (

, so that frequency times inductance has units of

), consistent with its role as an effective resistance. It makes sense that

, since the greater the induction the greater its resistance to change. It is also reasonable that

is proportional to frequency

, since greater frequency means greater change in current. That is,

is large for large frequencies (large

Calculating Inductive Reactance and then Current

(a) Calculate the inductive reactance of a 3.00 mH inductor when 60.0 Hz and 10.0 kHz AC voltages are applied. (b) What is the rms current at each frequency if the applied rms voltage is 120 V?

The inductive reactance is found directly from the expression

has been found at each frequency, Ohm’s law as stated in the Equation

can be used to find the current at each frequency.

Entering the frequency and inductance into Equation

, given the applied rms voltage is 120 V. For the first frequency, this yields

The inductor reacts very differently at the two different frequencies. At the higher frequency, its reactance is large and the current is small, consistent with how an inductor impedes rapid change. Thus high frequencies are impeded the most. Inductors can be used to filter out high frequencies; for example, a large inductor can be put in series with a sound reproduction system or in series with your home computer to reduce high-frequency sound output from your speakers or high-frequency power spikes into your computer.

Note that although the resistance in the circuit considered is negligible, the AC current is not extremely large because inductive reactance impedes its flow. With AC, there is no time for the current to become extremely large.

Consider the capacitor connected directly to an AC voltage source as shown in (Figure). The resistance of a circuit like this can be made so small that it has a negligible effect compared with the capacitor, and so we can assume negligible resistance. Voltage across the capacitor and current are graphed as functions of time in the figure.

(a) An AC voltage source in series with a capacitor C having negligible resistance. (b) Graph of current and voltage across the capacitor as functions of time.

AC Voltage in a Capacitor

When a sinusoidal voltage is applied to a capacitor, the voltage follows the current by one-fourth of a cycle, or by a

The capacitor is affecting the current, having the ability to stop it altogether when fully charged. Since an AC voltage is applied, there is an rms current, but it is limited by the capacitor. This is considered to be an effective resistance of the capacitor to AC, and so the rms current

in the circuit containing only a capacitor

is given by another version of Ohm’s law to be

is the rms voltage and

is defined (As with

is called the capacitive reactance, because the capacitor reacts to impede the current.

has units of ohms (verification left as an exercise for the reader).

is inversely proportional to the capacitance

; the greater the frequency, the less time there is to fully charge the capacitor, and so it impedes current less.

Calculating Capacitive Reactance and then Current

The capacitive reactance is found directly from the expression in

has been found at each frequency, Ohm’s law stated as

can be used to find the current at each frequency.

Entering the frequency and capacitance into

, given the applied rms voltage is 120 V. For the first frequency, this yields

Although a capacitor is basically an open circuit, there is an rms current in a circuit with an AC voltage applied to a capacitor. This is because the voltage is continually reversing, charging and discharging the capacitor. If the frequency goes to zero (DC),

tends to infinity, and the current is zero once the capacitor is charged. At very high frequencies, the capacitor’s reactance tends to zero—it has a negligible reactance and does not impede the current (it acts like a simple wire). Capacitors have the opposite effect on AC circuits that inductors have.

Resistors in an AC Circuit

(a) An AC voltage source in series with a resistor. (b) Graph of current and voltage across the resistor as functions of time, showing them to be exactly in phase.

AC Voltage in a Resistor

When a sinusoidal voltage is applied to a resistor, the voltage is exactly in phase with the current—they have a

Presbycusis is a hearing loss due to age that progressively affects higher frequencies. A hearing aid amplifier is designed to amplify all frequencies equally. To adjust its output for presbycusis, would you put a capacitor in series or parallel with the hearing aid’s speaker? Explain.

Would you use a large inductance or a large capacitance in series with a system to filter out low frequencies, such as the 100 Hz hum in a sound system? Explain.

High-frequency noise in AC power can damage computers. Does the plug-in unit designed to prevent this damage use a large inductance or a large capacitance (in series with the computer) to filter out such high frequencies? Explain.

Does inductance depend on current, frequency, or both? What about inductive reactance?

Capacitors and inductors. Capacitor with high frequency and low frequency. 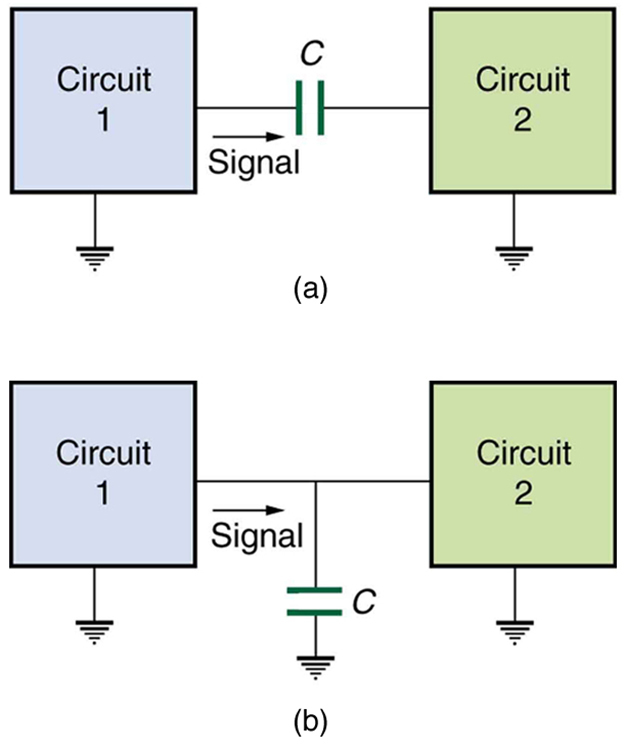 At what frequency will a 30.0 mH inductor have a reactance of

What value of inductance should be used if a

reactance is needed at a frequency of 500 Hz?

What capacitance should be used to produce a

At what frequency will an 80.0 mF capacitor have a reactance of

(a) An inductor designed to filter high-frequency noise from power supplied to a personal computer is placed in series with the computer. What minimum inductance should it have to produce a

The capacitor in (Figure)(a) is designed to filter low-frequency signals, impeding their transmission between circuits. (a) What capacitance is needed to produce a

The capacitor in (Figure)(b) will filter high-frequency signals by shorting them to earth/ground. (a) What capacitance is needed to produce a reactance of

In a recording of voltages due to brain activity (an EEG), a 10.0 mV signal with a 0.500 Hz frequency is applied to a capacitor, producing a current of 100 mA. Resistance is negligible. (a) What is the capacitance? (b) What is unreasonable about this result? (c) Which assumption or premise is responsible?

Consider the use of an inductor in series with a computer operating on 60 Hz electricity. Construct a problem in which you calculate the relative reduction in voltage of incoming high frequency noise compared to 60 Hz voltage. Among the things to consider are the acceptable series reactance of the inductor for 60 Hz power and the likely frequencies of noise coming through the power lines.

inductive reactance
the opposition of an inductor to a change in current; calculated by

capacitive reactance
the opposition of a capacitor to a change in current; calculated by