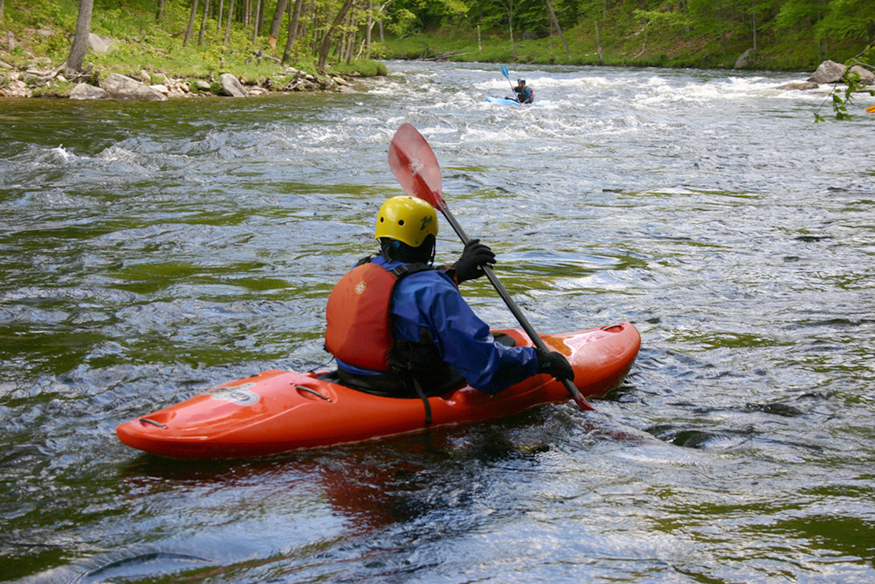 If you’ve ever seen a kayak move down a fast-moving river, you know that remaining in the same place would be hard. The river current pulls the kayak along. Pushing the oars back against the water can move the kayak forward in the water, but that only accounts for part of the velocity. The kayak’s motion is an example of classical addition of velocities. In classical physics, velocities add as vectors. The kayak’s velocity is the vector sum of its velocity relative to the water and the water’s velocity relative to the riverbank.

For simplicity, we restrict our consideration of velocity addition to one-dimensional motion. Classically, velocities add like regular numbers in one-dimensional motion. (See (Figure).) Suppose, for example, a girl is riding in a sled at a speed 1.0 m/s relative to an observer. She throws a snowball first forward, then backward at a speed of 1.5 m/s relative to the sled. We denote direction with plus and minus signs in one dimension; in this example, forward is positive. Let

be the velocity of the sled relative to the Earth,

the velocity of the snowball relative to the Earth-bound observer, and

the velocity of the snowball relative to the sled.

Classically, velocities add like ordinary numbers in one-dimensional motion. Here the girl throws a snowball forward and then backward from a sled. The velocity of the sled relative to the Earth is

. The velocity of the snowball relative to the sled is

, while its velocity relative to the Earth is 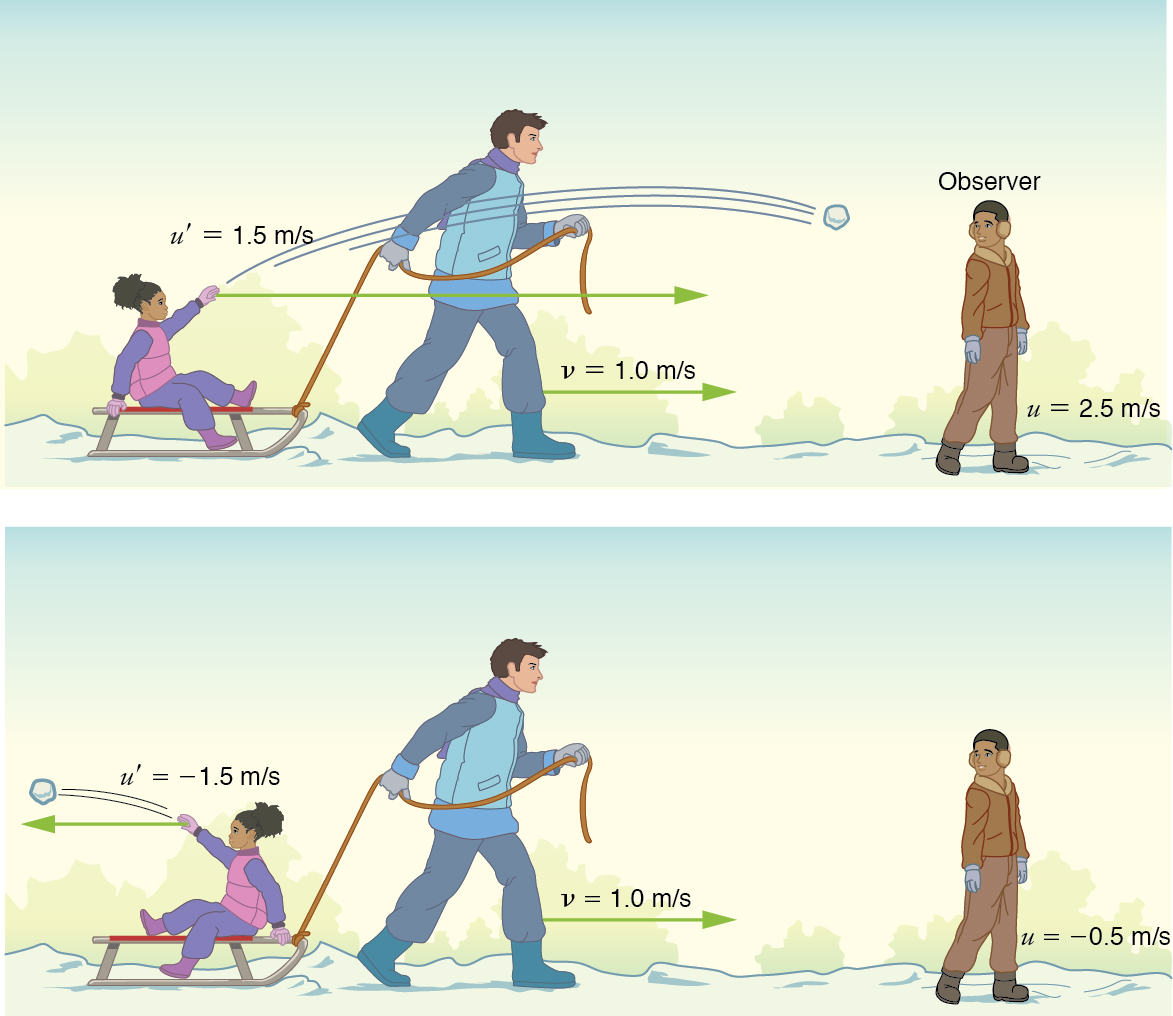 Thus, when the girl throws the snowball forward,

. It makes good intuitive sense that the snowball will head towards the Earth-bound observer faster, because it is thrown forward from a moving vehicle. When the girl throws the snowball backward,

. The minus sign means the snowball moves away from the Earth-bound observer.

. But we know that light will move away from the car at speed

relative to the driver of the car, and light will move towards the observer on the sidewalk at speed

According to experiment and the second postulate of relativity, light from the car’s headlights moves away from the car at speed

and towards the observer on the sidewalk at speed

. Classical velocity addition is not valid.

is the relative velocity between two observers,

is the velocity relative to the other observer. (For ease of visualization, we often choose to measure

in our reference frame, while someone moving at

relative to us measures

.) Note that the term

Suppose a spaceship heading directly towards the Earth at half the speed of light sends a signal to us on a laser-produced beam of light. Given that the light leaves the ship at speed

as observed from the ship, calculate the speed at which it approaches the Earth. 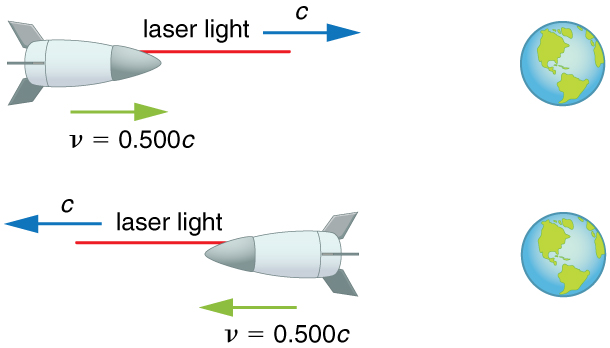 and approaches the Earth at speed

. The speed of light is independent of the relative motion of source and observer, whether the observer is on the ship or Earth-bound.

Velocities cannot add to greater than the speed of light, provided that

Comparing the Speed of Light towards and away from an Observer: Relativistic Package Delivery

), which means the canister is heading towards the Earth in part (a) and away in part (b), as expected. But relativistic velocities do not add as simply as they do classically. In part (a), the canister does approach the Earth faster, but not at the simple sum of

. The total velocity is less than you would get classically. And in part (b), the canister moves away from the Earth at a velocity of

, which is faster than the

you would expect classically. The velocities are not even symmetric. In part (a) the canister moves

faster than the ship relative to the Earth, whereas in part (b) it moves

slower than the ship.

Although the speed of light does not change with relative velocity, the frequencies and wavelengths of light do. First discussed for sound waves, a Doppler shift occurs in any wave when there is relative motion between source and observer.

In the Doppler equation,

is the observed wavelength,

is the source wavelength, and

is the relative velocity of the source to the observer. The velocity

Notice that the – and + signs are different than in the wavelength equation.

If you are interested in a career that requires a knowledge of special relativity, there’s probably no better connection than astronomy. Astronomers must take into account relativistic effects when they calculate distances, times, and speeds of black holes, galaxies, quasars, and all other astronomical objects. To have a career in astronomy, you need at least an undergraduate degree in either physics or astronomy, but a Master’s or doctoral degree is often required. You also need a good background in high-level mathematics.

Calculating a Doppler Shift: Radio Waves from a Receding Galaxy

. It emits radio waves with a wavelength of

. What wavelength would we detect on the Earth?

Because the galaxy is moving away from the Earth, we expect the wavelengths of radiation it emits to be redshifted. The wavelength we calculated is 1.70 m, which is redshifted from the original wavelength of 0.525 m.

. It sends a radio wave message back to the Earth at a frequency of 1.50 GHz. At what frequency is the message received on the Earth?

Explain the meaning of the terms “red shift” and “blue shift” as they relate to the relativistic Doppler effect.

What happens to the relativistic Doppler effect when relative velocity is zero? Is this the expected result?

is larger for motion away?

All galaxies farther away than about

exhibit a red shift in their emitted light that is proportional to distance, with those farther and farther away having progressively greater red shifts. What does this imply, assuming that the only source of red shift is relative motion? (Hint: At these large distances, it is space itself that is expanding, but the effect on light is the same.)

Suppose a spaceship heading straight towards the Earth at

can shoot a canister at

Repeat the previous problem with the ship heading directly away from the Earth.

If a spaceship is approaching the Earth at

and a message capsule is sent toward it at

(a) Suppose the speed of light were only

. A jet fighter moving toward a target on the ground at

shoots bullets, each having a muzzle velocity of

. What are the bullets’ velocity relative to the target? (b) If the speed of light was this small, would you observe relativistic effects in everyday life? Discuss.

light characteristic of hydrogen (the most common element in the universe). (a) What wavelength would we observe on the Earth? (b) What type of electromagnetic radiation is this? (c) Why is the speed of the Earth in its orbit negligible here?

A space probe speeding towards the nearest star moves at

and sends radio information at a broadcast frequency of 1.00 GHz. What frequency is received on the Earth?

If two spaceships are heading directly towards each other at

, at what speed must a canister be shot from the first ship to approach the other at

as seen by the second ship?

Two planets are on a collision course, heading directly towards each other at

. A spaceship sent from one planet approaches the second at

as seen by the second planet. What is the velocity of the ship relative to the first planet?

When a missile is shot from one spaceship towards another, it leaves the first at

and approaches the other at

. What is the relative velocity of the two ships?

and the other observes it to approach at

Near the center of our galaxy, hydrogen gas is moving directly away from us in its orbit about a black hole. We receive 1900 nm electromagnetic radiation and know that it was 1875 nm when emitted by the hydrogen gas. What is the speed of the gas?

A highway patrol officer uses a device that measures the speed of vehicles by bouncing radar off them and measuring the Doppler shift. The outgoing radar has a frequency of 100 GHz and the returning echo has a frequency 15.0 kHz higher. What is the velocity of the vehicle? Note that there are two Doppler shifts in echoes. Be certain not to round off until the end of the problem, because the effect is small.

Prove that for any relative velocity

between two observers, a beam of light sent from one to the other will approach at speed

Show that for any relative velocity

between two observers, a beam of light projected by one directly away from the other will move away at the speed of light (provided that

(a) All but the closest galaxies are receding from our own Milky Way Galaxy. If a galaxy

ly away is receding from us at 0.

, at what velocity relative to us must we send an exploratory probe to approach the other galaxy at

(all to sufficient digits to show effects)

classical velocity addition
the method of adding velocities when

is the velocity between two observers,

relativistic velocity addition
the method of adding velocities of an object moving at a relativistic speed:

is the relative velocity between two observers,

is the observed wavelength,

is the source wavelength, and

is the velocity of the source to the observer