Simple machines are devices that can be used to multiply or augment a force that we apply – often at the expense of a distance through which we apply the force. The word for “machine” comes from the Greek word meaning “to help make things easier.” Levers, gears, pulleys, wedges, and screws are some examples of machines. Energy is still conserved for these devices because a machine cannot do more work than the energy put into it. However, machines can reduce the input force that is needed to perform the job. The ratio of output to input force magnitudes for any simple machine is called its mechanical advantage (MA).

One of the simplest machines is the lever, which is a rigid bar pivoted at a fixed place called the fulcrum. Torques are involved in levers, since there is rotation about a pivot point. Distances from the physical pivot of the lever are crucial, and we can obtain a useful expression for the MA in terms of these distances.

) is not a force on the nail puller. The reaction force the nail exerts back on the puller (

) is an external force and is equal and opposite to

. The perpendicular lever arms of the input and output forces are 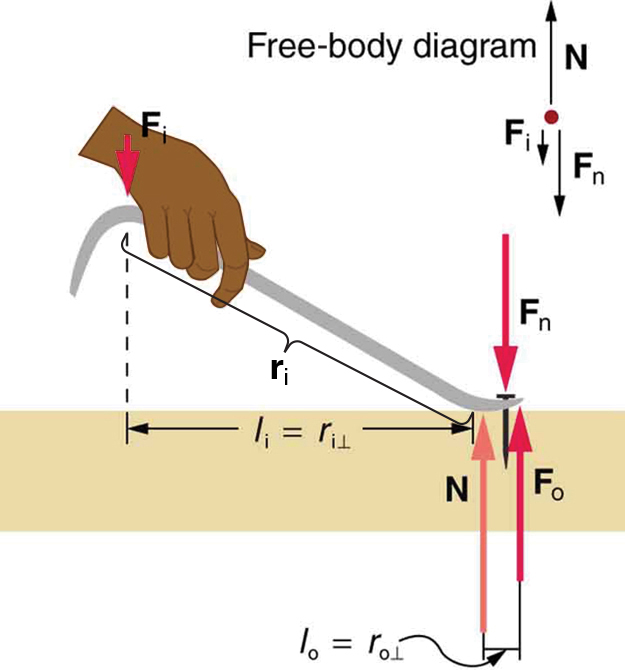 (Figure) shows a lever type that is used as a nail puller. Crowbars, seesaws, and other such levers are all analogous to this one.

is the input force and

is the output force. There are three vertical forces acting on the nail puller (the system of interest) – these are

is the reaction force back on the system, equal and opposite to

is not a force on the system.)

is the normal force upon the lever, and its torque is zero since it is exerted at the pivot. The torques due to

must be equal to each other if the nail is not moving, to satisfy the second condition for equilibrium

. (In order for the nail to actually move, the torque due to

must be ever-so-slightly greater than torque due to

is applied. The distances

are the perpendicular components of the distances from where the input and output forces are applied to the pivot, as shown in the figure. Rearranging the last equation gives

What interests us most here is that the magnitude of the force exerted by the nail puller,

, is much greater than the magnitude of the input force applied to the puller at the other end,

. For the nail puller,

Two other types of levers that differ slightly from the nail puller are a wheelbarrow and a shovel, shown in (Figure). All these lever types are similar in that only three forces are involved – the input force, the output force, and the force on the pivot – and thus their MAs are given by

, with distances being measured relative to the physical pivot. The wheelbarrow and shovel differ from the nail puller because both the input and output forces are on the same side of the pivot. 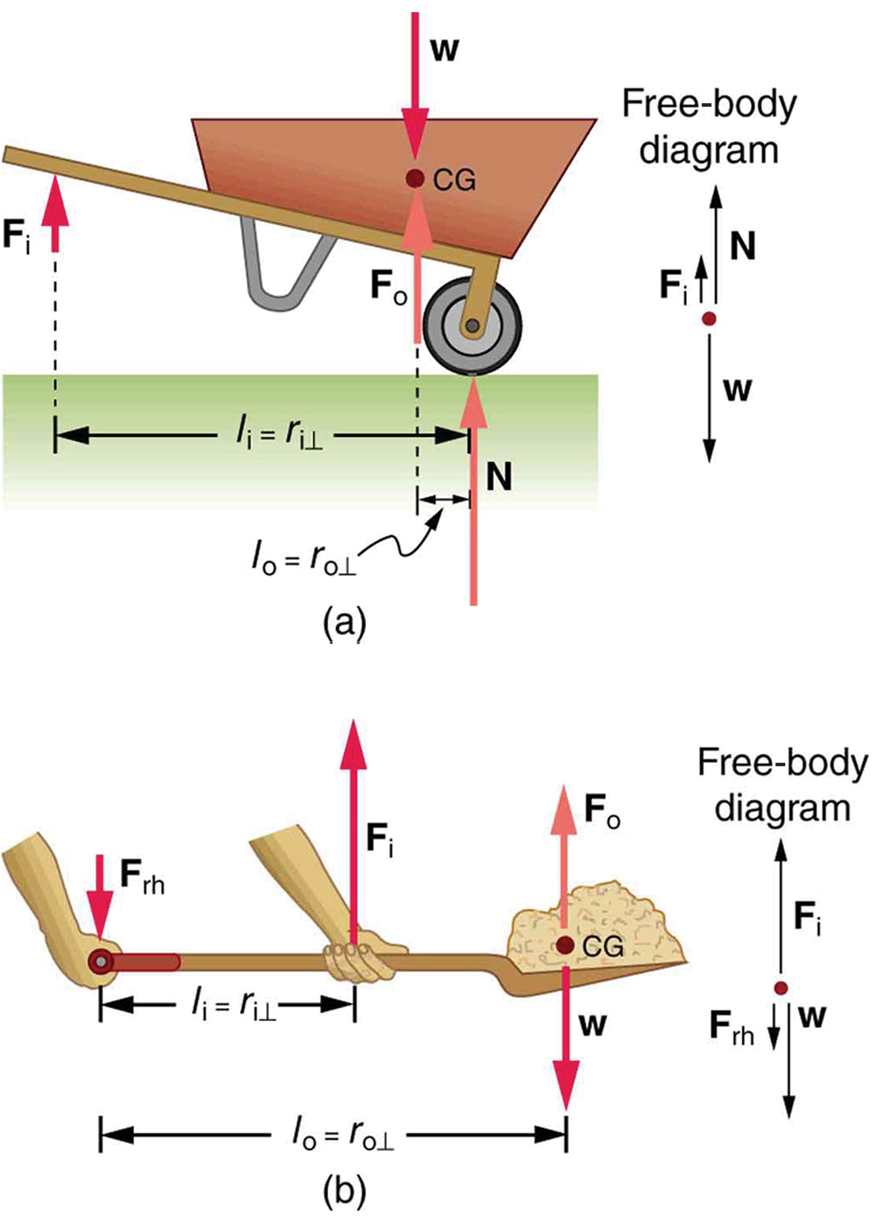 What is the Advantage for the Wheelbarrow?

Here, we use the concept of mechanical advantage.

Adding values into this equation yields

is the normal force acting on the wheel; by Newton’s third law, the force the wheel exerts on the ground is

An even longer handle would reduce the force needed to lift the load. The MA here is

Another very simple machine is the inclined plane. Pushing a cart up a plane is easier than lifting the same cart straight up to the top using a ladder, because the applied force is less. However, the work done in both cases (assuming the work done by friction is negligible) is the same. Inclined lanes or ramps were probably used during the construction of the Egyptian pyramids to move large blocks of stone to the top.

A crank is a lever that can be rotated

about its pivot, as shown in (Figure). Such a machine may not look like a lever, but the physics of its actions remain the same. The MA for a crank is simply the ratio of the radii

and the wheel’s radius is

and the axle would have to exert a force of

on the wheel to enable it to exert a force of

about its pivot. Cranks are usually designed to have a large MA. (b) A simplified automobile axle drives a wheel, which has a much larger diameter than the axle. The MA is less than 1. (c) An ordinary pulley is used to lift a heavy load. The pulley changes the direction of the force

exerted by the cord without changing its magnitude. Hence, this machine has an MA of 1.

An ordinary pulley has an MA of 1; it only changes the direction of the force and not its magnitude. Combinations of pulleys, such as those illustrated in (Figure), are used to multiply force. If the pulleys are friction-free, then the force output is approximately an integral multiple of the tension in the cable. The number of cables pulling directly upward on the system of interest, as illustrated in the figures given below, is approximately the MA of the pulley system. Since each attachment applies an external force in approximately the same direction as the others, they add, producing a total force that is nearly an integral multiple of the input force

(a) The combination of pulleys is used to multiply force. The force is an integral multiple of tension if the pulleys are frictionless. This pulley system has two cables attached to its load, thus applying a force of approximately

. (b) Three pulleys are used to lift a load in such a way that the mechanical advantage is about 3. Effectively, there are three cables attached to the load. (c) This pulley system applies a force of

. Effectively, four cables are pulling on the system of interest. 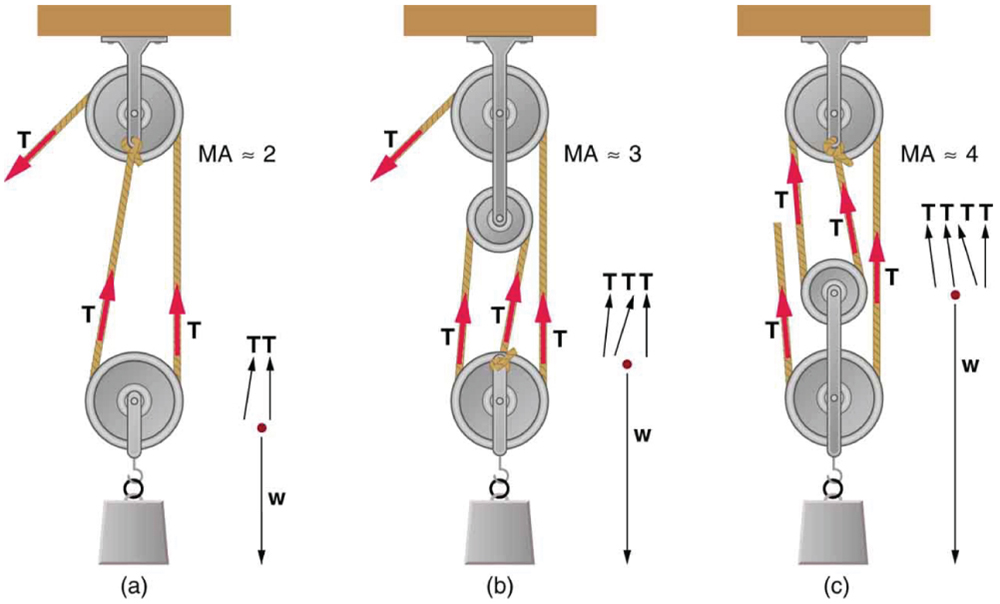 Scissors are like a double-lever system. Which of the simple machines in (Figure) and (Figure) is most analogous to scissors?

Explain why the forces in our joints are several times larger than the forces we exert on the outside world with our limbs. Can these forces be even greater than muscle forces (see previous Question)?

from the pivot and the nail is

on the other side? What minimum force must you exert to apply a force of

Suppose you needed to raise a 250-kg mower a distance of 6.0 cm above the ground to change a tire. If you had a 2.0-m long lever, where would you place the fulcrum if your force was limited to 300 N?

A typical car has an axle with

radius driving a tire with a radius of

. What is its mechanical advantage assuming the very simplified model in (Figure)(b)?

, (a) What would be the tension in the rope? (b) What force must the ceiling supply, assuming you pull straight down on the rope? Neglect the pulley system’s mass.

Repeat (Figure) for the pulley shown in (Figure)(c), assuming you pull straight up on the rope. The pulley system’s mass is