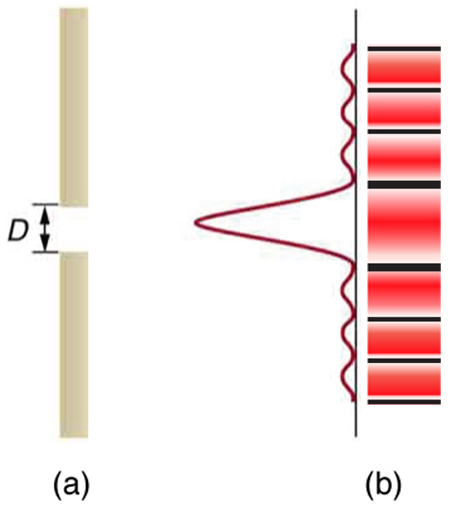 The analysis of single slit diffraction is illustrated in (Figure). Here we consider light coming from different parts of the same slit. According to Huygens’s principle, every part of the wavefront in the slit emits wavelets. These are like rays that start out in phase and head in all directions. (Each ray is perpendicular to the wavefront of a wavelet.) Assuming the screen is very far away compared with the size of the slit, rays heading toward a common destination are nearly parallel. When they travel straight ahead, as in (Figure)(a), they remain in phase, and a central maximum is obtained. However, when rays travel at an angle

relative to the original direction of the beam, each travels a different distance to a common location, and they can arrive in or out of phase. In (Figure)(b), the ray from the bottom travels a distance of one wavelength

farther than the one on the left, arrives out of phase, and interferes destructively. A ray from slightly above the center and one from slightly above the bottom will also cancel one another. In fact, each ray from the slit will have another to interfere destructively, and a minimum in intensity will occur at this angle. There will be another minimum at the same angle to the right of the incident direction of the light.

Light passing through a single slit is diffracted in all directions and may interfere constructively or destructively, depending on the angle. The difference in path length for rays from either side of the slit is seen to be 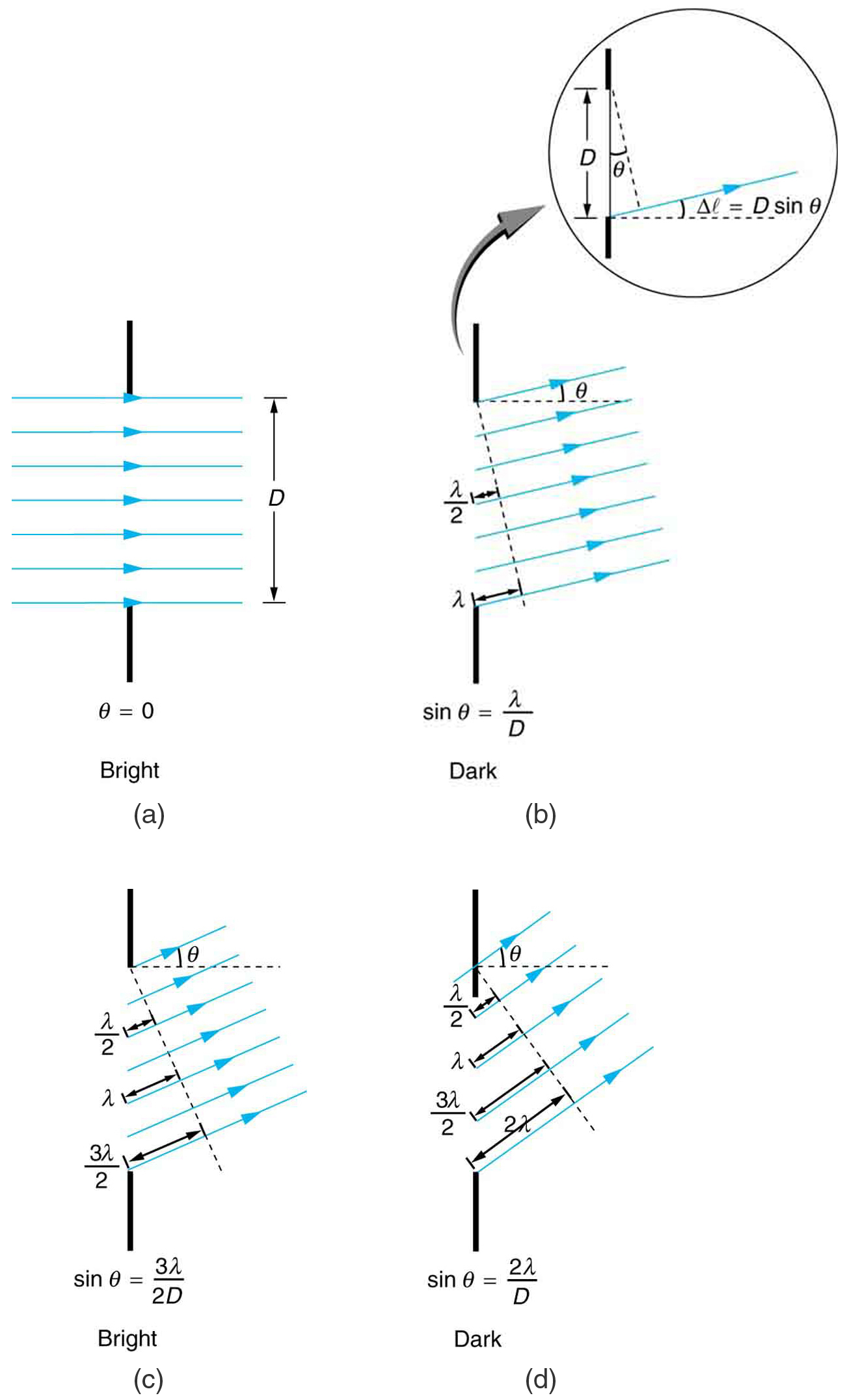 At the larger angle shown in (Figure)(c), the path lengths differ by

for rays from the top and bottom of the slit. One ray travels a distance

different from the ray from the bottom and arrives in phase, interfering constructively. Two rays, each from slightly above those two, will also add constructively. Most rays from the slit will have another to interfere with constructively, and a maximum in intensity will occur at this angle. However, all rays do not interfere constructively for this situation, and so the maximum is not as intense as the central maximum. Finally, in (Figure)(d), the angle shown is large enough to produce a second minimum. As seen in the figure, the difference in path length for rays from either side of the slit is

, and we see that a destructive minimum is obtained when this distance is an integral multiple of the wavelength. 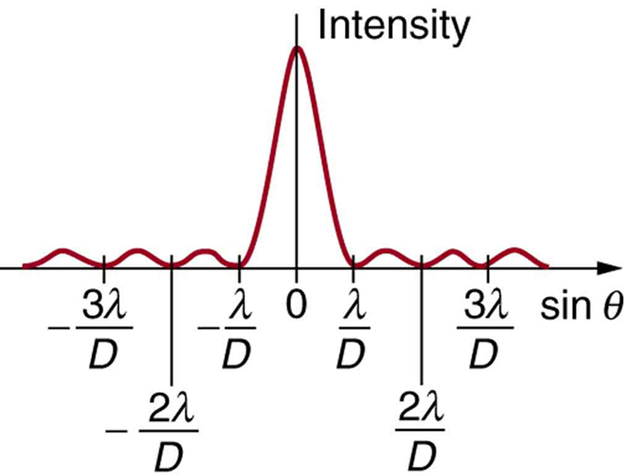 Thus, to obtain destructive interference for a single slit,

is the slit width,

is the angle relative to the original direction of the light, and

is the order of the minimum. (Figure) shows a graph of intensity for single slit interference, and it is apparent that the maxima on either side of the central maximum are much less intense and not as wide. This is consistent with the illustration in (Figure)(b).

relative to the incident direction of the light. (a) What is the width of the slit? (b) At what angle is the first minimum produced?

A graph of the single slit diffraction pattern is analyzed in this example. 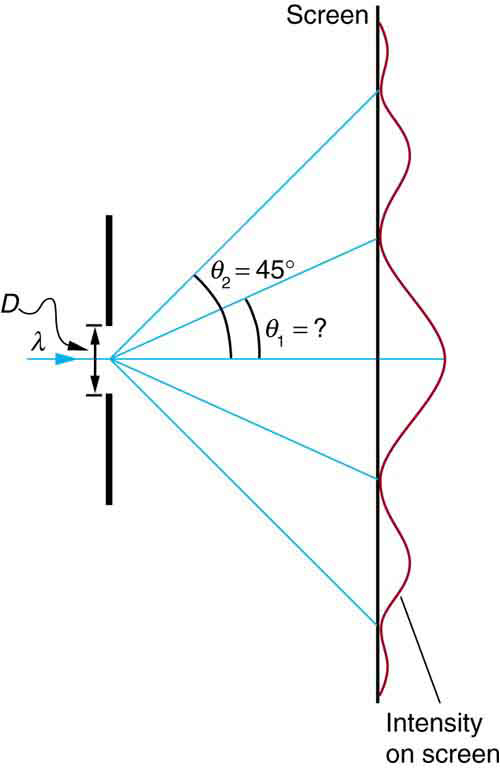 From the given information, and assuming the screen is far away from the slit, we can use the equation

, and again to find the angle for the first minimum

and substituting the known values gives

We see that the slit is narrow (it is only a few times greater than the wavelength of light). This is consistent with the fact that light must interact with an object comparable in size to its wavelength in order to exhibit significant wave effects such as this single slit diffraction pattern. We also see that the central maximum extends

on either side of the original beam, for a width of about

. The angle between the first and second minima is only about

. Thus the second maximum is only about half as wide as the central maximum.

? (b) Will there be a second minimum?

(a) Calculate the angle at which a

? (b) At what angle will the second minimum be?

for 600-nm light? (b) Find the wavelength of light that has its first minimum at

when it falls on a single slit of width

when falling on a single slit of width

. At what angle does it produces its second minimum? (b) What is the highest-order minimum produced?

. (b) What slit width would place this minimum at

? Explicitly show how you follow the steps in Problem-Solving Strategies for Wave Optics

(a) Find the angle between the first minima for the two sodium vapor lines, which have wavelengths of 589.1 and 589.6 nm, when they fall upon a single slit of width

. (b) What is the distance between these minima if the diffraction pattern falls on a screen 1.00 m from the slit? (c) Discuss the ease or difficulty of measuring such a distance.

(c) This distance is not easily measured by human eye, but under a microscope or magnifying glass it is quite easily measurable.

) that will produce a first minimum for a wavelength

(a) If a single slit produces a first minimum at

A water break at the entrance to a harbor consists of a rock barrier with a 50.0-m-wide opening. Ocean waves of 20.0-m wavelength approach the opening straight on. At what angle to the incident direction are the boats inside the harbor most protected against wave action?

An aircraft maintenance technician walks past a tall hangar door that acts like a single slit for sound entering the hangar. Outside the door, on a line perpendicular to the opening in the door, a jet engine makes a 600-Hz sound. At what angle with the door will the technician observe the first minimum in sound intensity if the vertical opening is 0.800 m wide and the speed of sound is 340 m/s?

destructive interference for a single slit
occurs when

is the slit width,

is the angle relative to the original direction of the light, and

is the order of the minimum