Noise on crowded roadways like this one in Delhi makes it hard to hear others unless they shout. (credit: Lingaraj G J, Flickr) 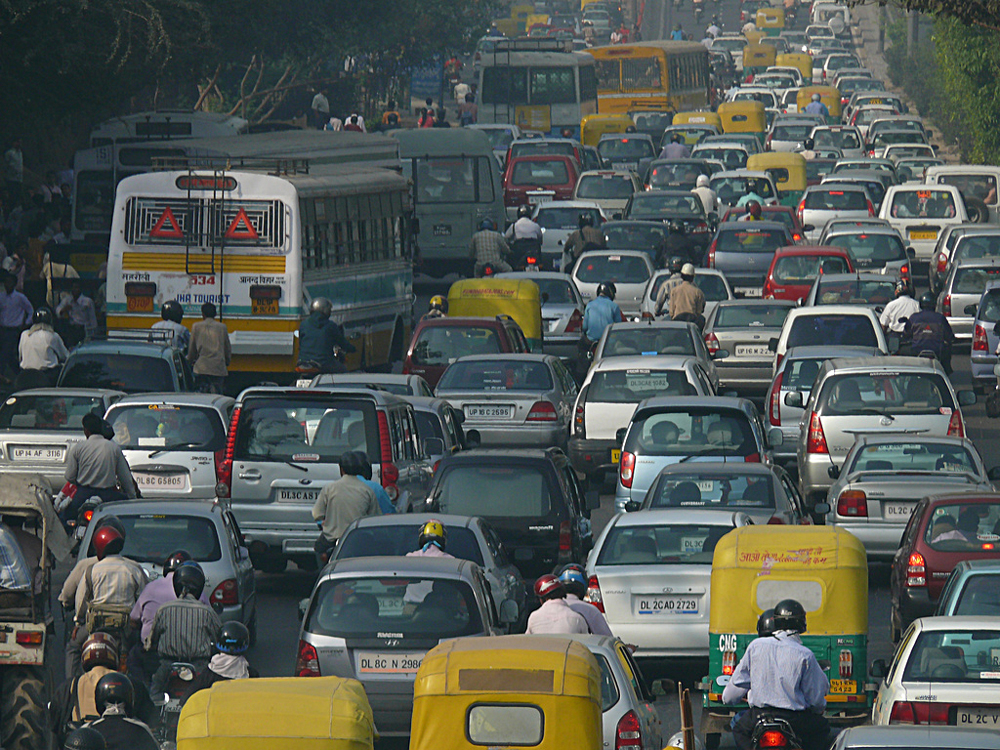 In a quiet forest, you can sometimes hear a single leaf fall to the ground. After settling into bed, you may hear your blood pulsing through your ears. But when a passing motorist has his stereo turned up, you cannot even hear what the person next to you in your car is saying. We are all very familiar with the loudness of sounds and aware that they are related to how energetically the source is vibrating. In cartoons depicting a screaming person (or an animal making a loud noise), the cartoonist often shows an open mouth with a vibrating uvula, the hanging tissue at the back of the mouth, to suggest a loud sound coming from the throat (Figure). High noise exposure is hazardous to hearing, and it is common for musicians to have hearing losses that are sufficiently severe that they interfere with the musicians’ abilities to perform. The relevant physical quantity is sound intensity, a concept that is valid for all sounds whether or not they are in the audible range.

Intensity is defined to be the power per unit area carried by a wave. Power is the rate at which energy is transferred by the wave. In equation form, intensity

is the power through an area

. The SI unit for

. The intensity of a sound wave is related to its amplitude squared by the following relationship:

. (We are using a lower case

for pressure to distinguish it from power, denoted by

above.) The energy (as kinetic energy

) of an oscillating element of air due to a traveling sound wave is proportional to its amplitude squared. In this equation,

is the density of the material in which the sound wave travels, in units of

is the speed of sound in the medium, in units of m/s. The pressure variation is proportional to the amplitude of the oscillation, and so

((Figure)). This relationship is consistent with the fact that the sound wave is produced by some vibration; the greater its pressure amplitude, the more the air is compressed in the sound it creates.

Graphs of the gauge pressures in two sound waves of different intensities. The more intense sound is produced by a source that has larger-amplitude oscillations and has greater pressure maxima and minima. Because pressures are higher in the greater-intensity sound, it can exert larger forces on the objects it encounters. 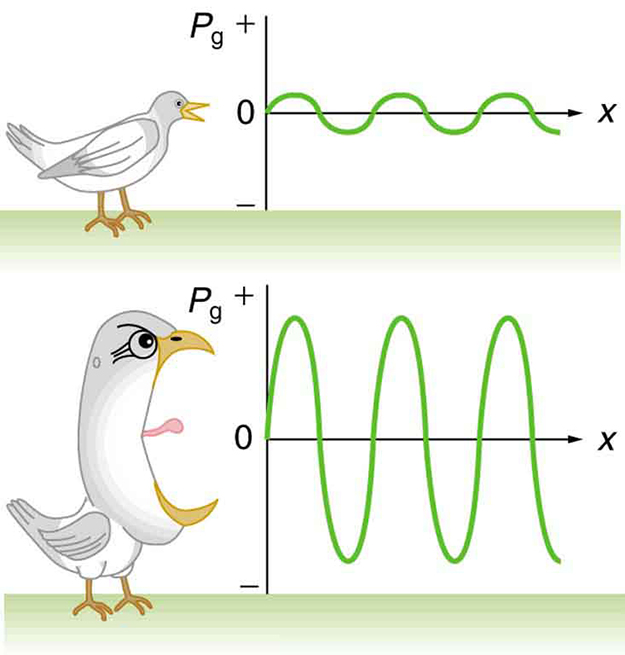 in decibels of a sound having an intensity

in watts per meter squared is defined to be

is a reference intensity. In particular,

is the lowest or threshold intensity of sound a person with normal hearing can perceive at a frequency of 1000 Hz. Sound intensity level is not the same as intensity. Because

is defined in terms of a ratio, it is a unitless quantity telling you the level of the sound relative to a fixed standard (

, in this case). The units of decibels (dB) are used to indicate this ratio is multiplied by 10 in its definition. The bel, upon which the decibel is based, is named for Alexander Graham Bell, the inventor of the telephone.

The decibel level of a sound having the threshold intensity of

. That is, the threshold of hearing is 0 decibels. (Figure) gives levels in decibels and intensities in watts per meter squared for some familiar sounds.

W falls on it at the threshold of hearing! Air molecules in a sound wave of this intensity vibrate over a distance of less than one molecular diameter, and the gauge pressures involved are less than

Another impressive feature of the sounds in (Figure) is their numerical range. Sound intensity varies by a factor of

from threshold to a sound that causes damage in seconds. You are unaware of this tremendous range in sound intensity because how your ears respond can be described approximately as the logarithm of intensity. Thus, sound intensity levels in decibels fit your experience better than intensities in watts per meter squared. The decibel scale is also easier to relate to because most people are more accustomed to dealing with numbers such as 0, 53, or 120 than numbers such as

One more observation readily verified by examining (Figure) or using

times) as intense. Another example is that if one sound is

and having a pressure amplitude of 0.656 Pa.

, so we can calculate

straight from its definition in

Air has a density of

at atmospheric pressure and

(2) Enter these values and the pressure amplitude into

and the known value for

. Calculate to find the sound intensity level in decibels:

Change Intensity Levels of a Sound: What Happens to the Decibel Level?

Show that if one sound is twice as intense as another, it has a sound level about 3 dB higher.

You are given that the ratio of two intensities is 2 to 1, and are then asked to find the difference in their sound levels in decibels. You can solve this problem using of the properties of logarithms.

The ratio of the two intensities is 2 to 1, or:

We wish to show that the difference in sound levels is about 3 dB. That is, we want to show:

(2) Use the definition of

This means that the two sound intensity levels differ by 3.01 dB, or about 3 dB, as advertised. Note that because only the ratio

It should be noted at this point that there is another decibel scale in use, called the sound pressure level, based on the ratio of the pressure amplitude to a reference pressure. This scale is used particularly in applications where sound travels in water. It is beyond the scope of most introductory texts to treat this scale because it is not commonly used for sounds in air, but it is important to note that very different decibel levels may be encountered when sound pressure levels are quoted. For example, ocean noise pollution produced by ships may be as great as 200 dB expressed in the sound pressure level, where the more familiar sound intensity level we use here would be something under 140 dB for the same sound.

Find a CD player and a CD that has rock music. Place the player on a light table, insert the CD into the player, and start playing the CD. Place your hand gently on the table next to the speakers. Increase the volume and note the level when the table just begins to vibrate as the rock music plays. Increase the reading on the volume control until it doubles. What has happened to the vibrations?

Describe how amplitude is related to the loudness of a sound.

Amplitude is directly proportional to the experience of loudness. As amplitude increases, loudness increases.

10 dB: Running fingers through your hair.

50 dB: Inside a quiet home with no television or radio.

Six members of a synchronized swim team wear earplugs to protect themselves against water pressure at depths, but they can still hear the music and perform the combinations in the water perfectly. One day, they were asked to leave the pool so the dive team could practice a few dives, and they tried to practice on a mat, but seemed to have a lot more difficulty. Why might this be?

A community is concerned about a plan to bring train service to their downtown from the town’s outskirts. The current sound intensity level, even though the rail yard is blocks away, is 70 dB downtown. The mayor assures the public that there will be a difference of only 30 dB in sound in the downtown area. Should the townspeople be concerned? Why?

What is the intensity in watts per meter squared of 85.0-dB sound?

The warning tag on a lawn mower states that it produces noise at a level of 91.0 dB. What is this in watts per meter squared?

A sound wave traveling in

air has a pressure amplitude of 0.5 Pa. What is the intensity of the wave?

What intensity level does the sound in the preceding problem correspond to?

Show that an intensity of

is the same as

(a) What is the intensity of a sound that has a level 7.00 dB lower than a

(a) How much more intense is a sound that has a level 17.0 dB higher than another? (b) If one sound has a level 23.0 dB less than another, what is the ratio of their intensities?

at a frequency of 3000 Hz. What is the intensity of this sound in watts per meter squared?

If a large housefly 3.0 m away from you makes a noise of 40.0 dB, what is the noise level of 1000 flies at that distance, assuming interference has a negligible effect?

An 8-hour exposure to a sound intensity level of 90.0 dB may cause hearing damage. What energy in joules falls on a 0.800-cm-diameter eardrum so exposed?

(a) Ear trumpets were never very common, but they did aid people with hearing losses by gathering sound over a large area and concentrating it on the smaller area of the eardrum. What decibel increase does an ear trumpet produce if its sound gathering area is

and the area of the eardrum is

, but the trumpet only has an efficiency of 5.00% in transmitting the sound to the eardrum? (b) Comment on the usefulness of the decibel increase found in part (a).

, and concentrates the sound onto two eardrums with a total area of

Loudspeakers can produce intense sounds with surprisingly small energy input in spite of their low efficiencies. Calculate the power input needed to produce a 90.0-dB sound intensity level for a 12.0-cm-diameter speaker that has an efficiency of 1.00%. (This value is the sound intensity level right at the speaker.)

intensity
the power per unit area carried by a wave