114 Statistical Interpretation of Entropy and the Second Law of Thermodynamics: The Underlying Explanation

When you toss a coin a large number of times, heads and tails tend to come up in roughly equal numbers. Why doesn’t heads come up 100, 90, or even 80% of the time? (credit: Jon Sullivan, PDPhoto.org) 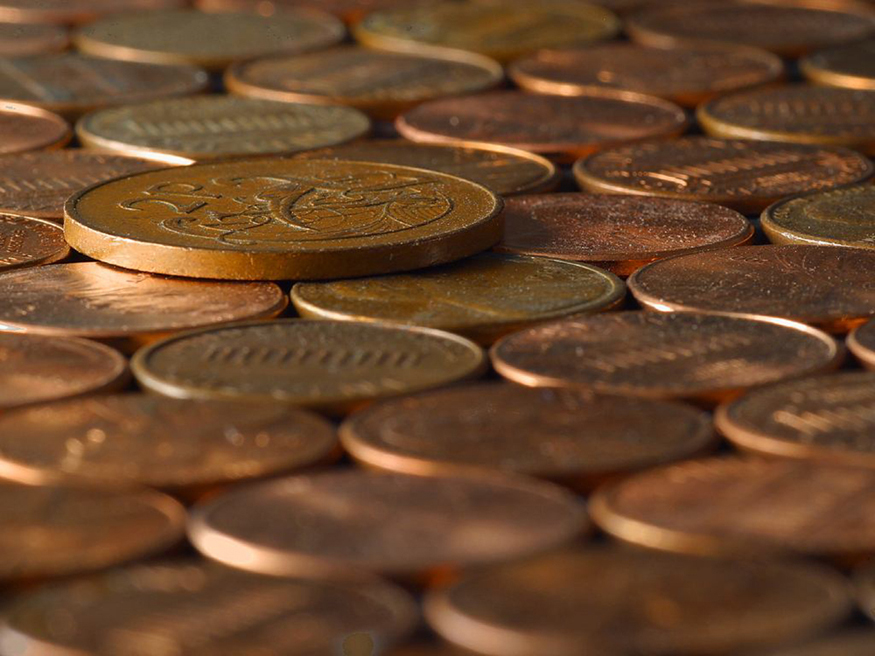 The various ways of formulating the second law of thermodynamics tell what happens rather than why it happens. Why should heat transfer occur only from hot to cold? Why should energy become ever less available to do work? Why should the universe become increasingly disorderly? The answer is that it is a matter of overwhelming probability. Disorder is simply vastly more likely than order.

When you watch an emerging rain storm begin to wet the ground, you will notice that the drops fall in a disorganized manner both in time and in space. Some fall close together, some far apart, but they never fall in straight, orderly rows. It is not impossible for rain to fall in an orderly pattern, just highly unlikely, because there are many more disorderly ways than orderly ones. To illustrate this fact, we will examine some random processes, starting with coin tosses.

What are the possible outcomes of tossing 5 coins? Each coin can land either heads or tails. On the large scale, we are concerned only with the total heads and tails and not with the order in which heads and tails appear. The following possibilities exist:

These are what we call macrostates. A macrostate is an overall property of a system. It does not specify the details of the system, such as the order in which heads and tails occur or which coins are heads or tails.

Using this nomenclature, a system of 5 coins has the 6 possible macrostates just listed. Some macrostates are more likely to occur than others. For instance, there is only one way to get 5 heads, but there are several ways to get 3 heads and 2 tails, making the latter macrostate more probable. (Figure) lists of all the ways in which 5 coins can be tossed, taking into account the order in which heads and tails occur. Each sequence is called a microstate—a detailed description of every element of a system.

years! This period is 1 trillion (

Disorder in a Gas

The fantastic growth in the odds favoring disorder that we see in going from 5 to 100 coins continues as the number of entities in the system increases. Let us now imagine applying this approach to perhaps a small sample of gas. Because counting microstates and macrostates involves statistics, this is called statistical analysis. The macrostates of a gas correspond to its macroscopic properties, such as volume, temperature, and pressure; and its microstates correspond to the detailed description of the positions and velocities of its atoms. Even a small amount of gas has a huge number of atoms:

The most likely conditions (or macrostates) for a gas are those we see all the time—a random distribution of atoms in space with a Maxwell-Boltzmann distribution of speeds in random directions, as predicted by kinetic theory. This is the most disorderly and least structured condition we can imagine. In contrast, one type of very orderly and structured macrostate has all of the atoms in one corner of a container with identical velocities. There are very few ways to accomplish this (very few microstates corresponding to it), and so it is exceedingly unlikely ever to occur. (See (Figure)(b).) Indeed, it is so unlikely that we have a law saying that it is impossible, which has never been observed to be violated—the second law of thermodynamics.

(a) The ordinary state of gas in a container is a disorderly, random distribution of atoms or molecules with a Maxwell-Boltzmann distribution of speeds. It is so unlikely that these atoms or molecules would ever end up in one corner of the container that it might as well be impossible. (b) With energy transfer, the gas can be forced into one corner and its entropy greatly reduced. But left alone, it will spontaneously increase its entropy and return to the normal conditions, because they are immensely more likely. 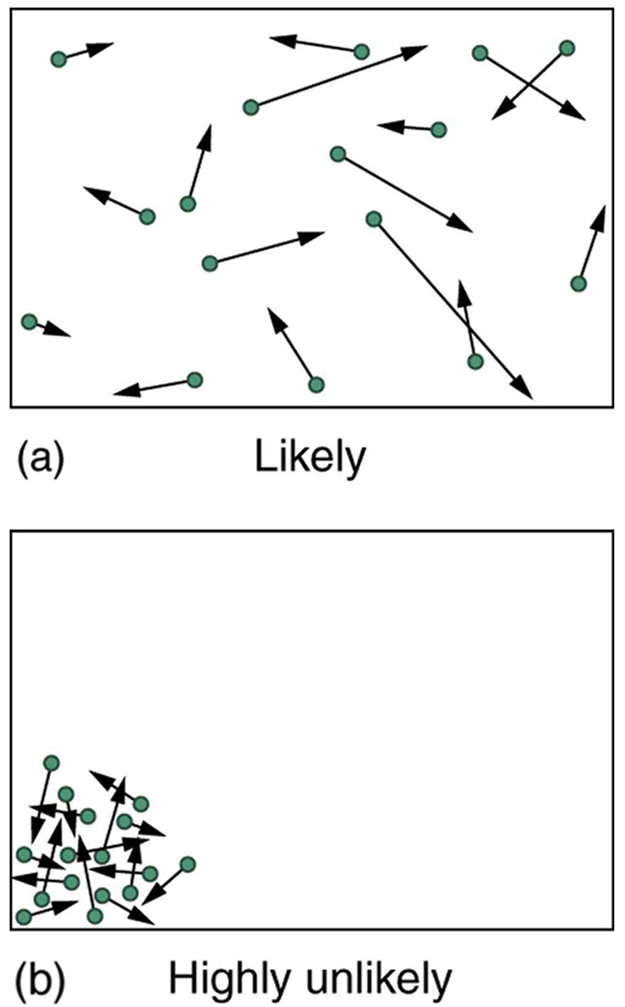 The disordered condition is one of high entropy, and the ordered one has low entropy. With a transfer of energy from another system, we could force all of the atoms into one corner and have a local decrease in entropy, but at the cost of an overall increase in entropy of the universe. If the atoms start out in one corner, they will quickly disperse and become uniformly distributed and will never return to the orderly original state ((Figure)(b)). Entropy will increase. With such a large sample of atoms, it is possible—but unimaginably unlikely—for entropy to decrease. Disorder is vastly more likely than order.

The arguments that disorder and high entropy are the most probable states are quite convincing. The great Austrian physicist Ludwig Boltzmann (1844–1906)—who, along with Maxwell, made so many contributions to kinetic theory—proved that the entropy of a system in a given state (a macrostate) can be written as

is Boltzmann’s constant, and

is the natural logarithm of the number of microstates

corresponding to the given macrostate.

is equivalent to the definition

, which we have used extensively.

Thus the second law of thermodynamics is explained on a very basic level: entropy either remains the same or increases in every process. This phenomenon is due to the extraordinarily small probability of a decrease, based on the extraordinarily larger number of microstates in systems with greater entropy. Entropy can decrease, but for any macroscopic system, this outcome is so unlikely that it will never be observed.

Entropy Increases in a Coin Toss

Suppose you toss 100 coins starting with 60 heads and 40 tails, and you get the most likely result, 50 heads and 50 tails. What is the change in entropy?

Noting that the number of microstates is labeled

to calculate the change in entropy.

The change in entropy is

This increase in entropy means we have moved to a less orderly situation. It is not impossible for further tosses to produce the initial state of 60 heads and 40 tails, but it is less likely. There is about a 1 in 90 chance for that decrease in entropy (

) to occur. If we calculate the decrease in entropy to move to the most orderly state, we get

. There is about a

chance of this change occurring. So while very small decreases in entropy are unlikely, slightly greater decreases are impossibly unlikely. These probabilities imply, again, that for a macroscopic system, a decrease in entropy is impossible. For example, for heat transfer to occur spontaneously from 1.00 kg of

environment, there would be a decrease in entropy of

corresponds to about a

chance, a decrease of this size (

) is an utter impossibility. Even for a milligram of melted ice to spontaneously refreeze is impossible.

Explain why a building made of bricks has smaller entropy than the same bricks in a disorganized pile. Do this by considering the number of ways that each could be formed (the number of microstates in each macrostate).

Using (Figure), verify the contention that if you toss 100 coins each second, you can expect to get 100 heads or 100 tails once in

It should happen twice in every

or once in every

What percent of the time will you get something in the range from 60 heads and 40 tails through 40 heads and 60 tails when tossing 100 coins? The total number of microstates in that range is

(a) If you toss 10 coins, what percent of the time will you get the three most likely macrostates (6 heads and 4 tails, 5 heads and 5 tails, 4 heads and 6 tails)? (b) You can realistically toss 10 coins and count the number of heads and tails about twice a minute. At that rate, how long will it take on average to get either 10 heads and 0 tails or 0 heads and 10 tails?

In an air conditioner, 12.65 MJ of heat transfer occurs from a cold environment in 1.00 h. (a) What mass of ice melting would involve the same heat transfer? (b) How many hours of operation would be equivalent to melting 900 kg of ice? (c) If ice costs 20 cents per kg, do you think the air conditioner could be operated more cheaply than by simply using ice? Describe in detail how you evaluate the relative costs.

macrostate
an overall property of a system

microstate
each sequence within a larger macrostate

statistical analysis
using statistics to examine data, such as counting microstates and macrostates