One of the major effects of heat transfer is temperature change: heating increases the temperature while cooling decreases it. We assume that there is no phase change and that no work is done on or by the system. Experiments show that the transferred heat depends on three factors—the change in temperature, the mass of the system, and the substance and phase of the substance.

of heat to cause a temperature change

in a given mass of copper, it will take 10.8 times that amount of heat to cause the equivalent temperature change in the same mass of water assuming no phase change in either substance. 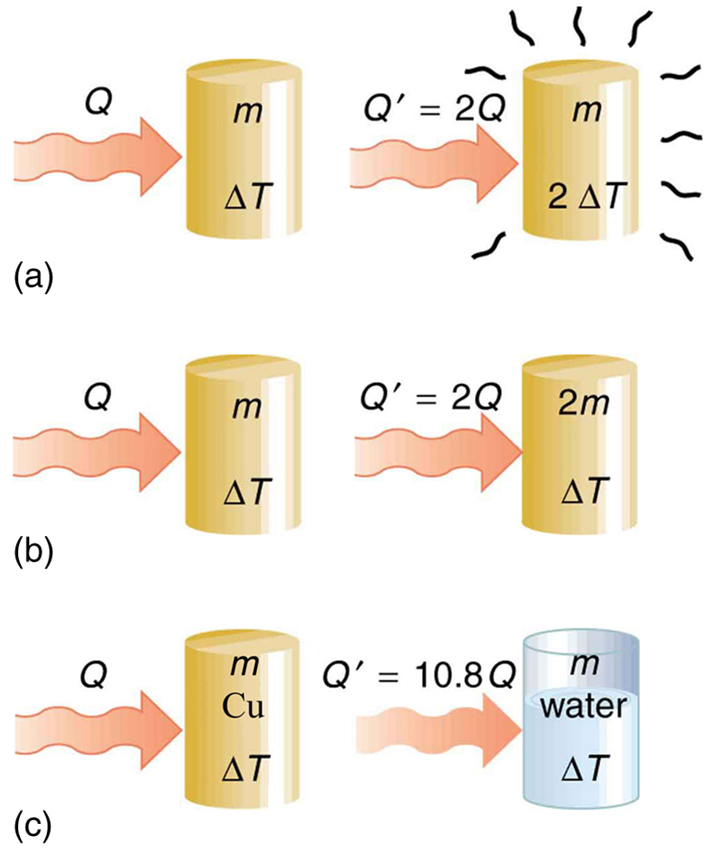 The quantitative relationship between heat transfer and temperature change contains all three factors:

is the symbol for heat transfer,

is the mass of the substance, and

is the change in temperature. The symbol

stands for specific heat and depends on the material and phase. The specific heat is the amount of heat necessary to change the temperature of 1.00 kg of mass by

is a property of the substance; its SI unit is

Recall that the temperature change

is the same in units of kelvin and degrees Celsius. If heat transfer is measured in kilocalories, then the unit of specific heat is

Calculating the Required Heat: Heating Water in an Aluminum Pan

. (a) How much heat is required? What percentage of the heat is used to raise the temperature of (b) the pan and (c) the water?

Because water is in thermal contact with the aluminum, the pan and the water are at the same temperature.

Thus, the amount of heat going into heating the pan is

and the amount going into heating the water is

In this example, the heat transferred to the container is a significant fraction of the total transferred heat. Although the mass of the pan is twice that of the water, the specific heat of water is over four times greater than that of aluminum. Therefore, it takes a bit more than twice the heat to achieve the given temperature change for the water as compared to the aluminum pan.

The smoking brakes on this truck are a visible evidence of the mechanical equivalent of heat. 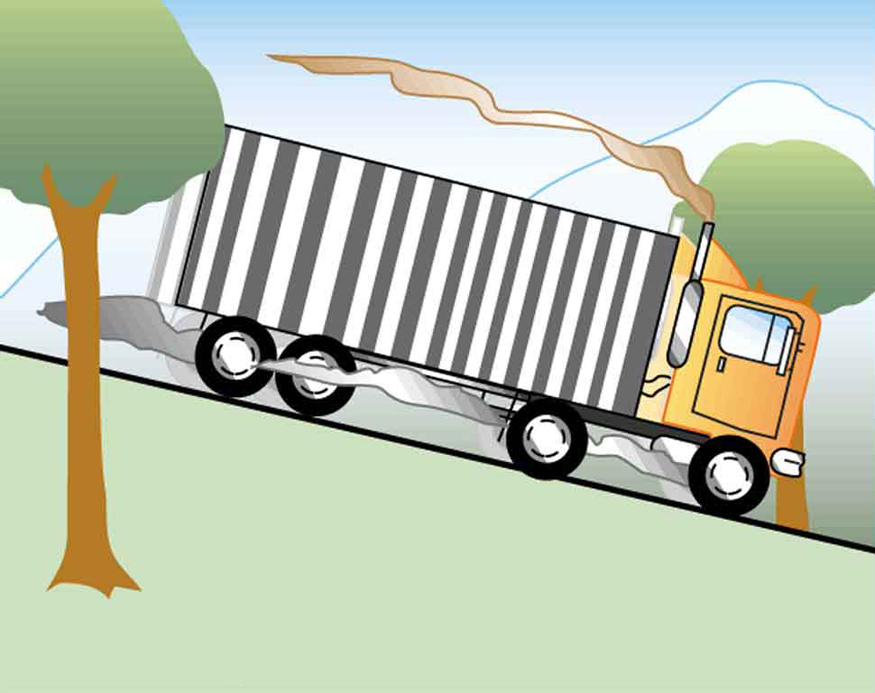 Calculating the Temperature Increase from the Work Done on a Substance: Truck Brakes Overheat on Downhill Runs

Truck brakes used to control speed on a downhill run do work, converting gravitational potential energy into increased internal energy (higher temperature) of the brake material. This conversion prevents the gravitational potential energy from being converted into kinetic energy of the truck. The problem is that the mass of the truck is large compared with that of the brake material absorbing the energy, and the temperature increase may occur too fast for sufficient heat to transfer from the brakes to the environment.

if the material retains 10% of the energy from a 10,000-kg truck descending 75.0 m (in vertical displacement) at a constant speed.

that the entire truck loses in its descent and then find the temperature increase produced in the brake material alone.

This same idea underlies the recent hybrid technology of cars, where mechanical energy (gravitational potential energy) is converted by the brakes into electrical energy (battery).

Note that (Figure) is an illustration of the mechanical equivalent of heat. Alternatively, the temperature increase could be produced by a blow torch instead of mechanically.

Calculating the Final Temperature When Heat Is Transferred Between Two Bodies: Pouring Cold Water in a Hot Pan

water (about a cup) into a 0.500-kg aluminum pan off the stove with a temperature of

. Assume that the pan is placed on an insulated pad and that a negligible amount of water boils off. What is the temperature when the water and pan reach thermal equilibrium a short time later?

This is a typical calorimetry problem—two bodies at different temperatures are brought in contact with each other and exchange heat until a common temperature is reached. Why is the final temperature so much closer to

? The reason is that water has a greater specific heat than most common substances and thus undergoes a small temperature change for a given heat transfer. A large body of water, such as a lake, requires a large amount of heat to increase its temperature appreciably. This explains why the temperature of a lake stays relatively constant during a day even when the temperature change of the air is large. However, the water temperature does change over longer times (e.g., summer to winter).

What heats faster, land or water?

To study differences in heat capacity:

Which sample cools off the fastest? This activity replicates the phenomena responsible for land breezes and sea breezes.

, how much heat is necessary to heat the block from

What three factors affect the heat transfer that is necessary to change an object’s temperature?

The brakes in a car increase in temperature by

when bringing the car to rest from a speed

. How much greater would

be if the car initially had twice the speed? You may assume the car to stop sufficiently fast so that no heat transfers out of the brakes.

On a hot day, the temperature of an 80,000-L swimming pool increases by

. What is the net heat transfer during this heating? Ignore any complications, such as loss of water by evaporation.

To sterilize a 50.0-g glass baby bottle, we must raise its temperature from

. How much heat transfer is required?

Rubbing your hands together warms them by converting work into thermal energy. If a woman rubs her hands back and forth for a total of 20 rubs, at a distance of 7.50 cm per rub, and with an average frictional force of 40.0 N, what is the temperature increase? The mass of tissues warmed is only 0.100 kg, mostly in the palms and fingers.

A 0.250-kg block of a pure material is heated from

by the addition of 4.35 kJ of energy. Calculate its specific heat and identify the substance of which it is most likely composed.

Suppose identical amounts of heat transfer into different masses of copper and water, causing identical changes in temperature. What is the ratio of the mass of copper to water?

(a) The number of kilocalories in food is determined by calorimetry techniques in which the food is burned and the amount of heat transfer is measured. How many kilocalories per gram are there in a 5.00-g peanut if the energy from burning it is transferred to 0.500 kg of water held in a 0.100-kg aluminum cup, causing a

temperature increase? (b) Compare your answer to labeling information found on a package of peanuts and comment on whether the values are consistent.

Following vigorous exercise, the body temperature of an 80.0-kg person is

. At what rate in watts must the person transfer thermal energy to reduce the the body temperature to

in 30.0 min, assuming the body continues to produce energy at the rate of 150 W?

Even when shut down after a period of normal use, a large commercial nuclear reactor transfers thermal energy at the rate of 150 MW by the radioactive decay of fission products. This heat transfer causes a rapid increase in temperature if the cooling system fails

. (a) Calculate the rate of temperature increase in degrees Celsius per second

if the mass of the reactor core is

and it has an average specific heat of

. (b) How long would it take to obtain a temperature increase of

steel containment vessel would also begin to heat up.) 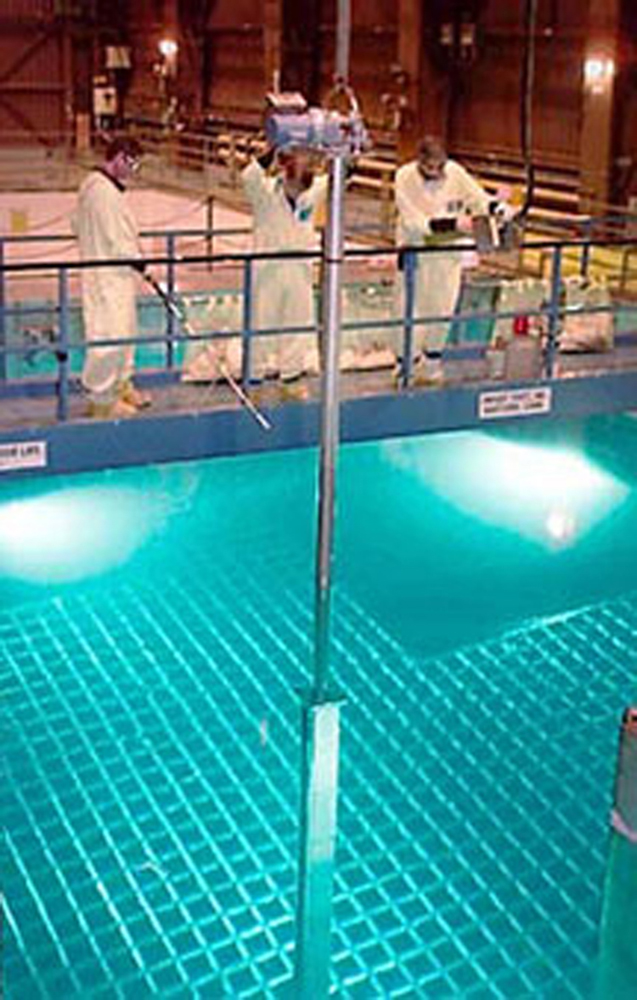 specific heat
the amount of heat necessary to change the temperature of 1.00 kg of a substance by 1.00 ºC