213 The Wave Aspect of Light: Interference

is the speed of light in vacuum,

is the frequency of the electromagnetic waves, and

is its wavelength. The range of visible wavelengths is approximately 380 to 760 nm. As is true for all waves, light travels in straight lines and acts like a ray when it interacts with objects several times as large as its wavelength. However, when it interacts with smaller objects, it displays its wave characteristics prominently. Interference is the hallmark of a wave, and in (Figure) both the ray and wave characteristics of light can be seen. The laser beam emitted by the observatory epitomizes a ray, traveling in a straight line. However, passing a pure-wavelength beam through vertical slits with a size close to the wavelength of the beam reveals the wave character of light, as the beam spreads out horizontally into a pattern of bright and dark regions caused by systematic constructive and destructive interference. Rather than spreading out, a ray would continue traveling straight ahead after passing through slits.

The most certain indication of a wave is interference. This wave characteristic is most prominent when the wave interacts with an object that is not large compared with the wavelength. Interference is observed for water waves, sound waves, light waves, and (as we will see in Special Relativity) for matter waves, such as electrons scattered from a crystal. 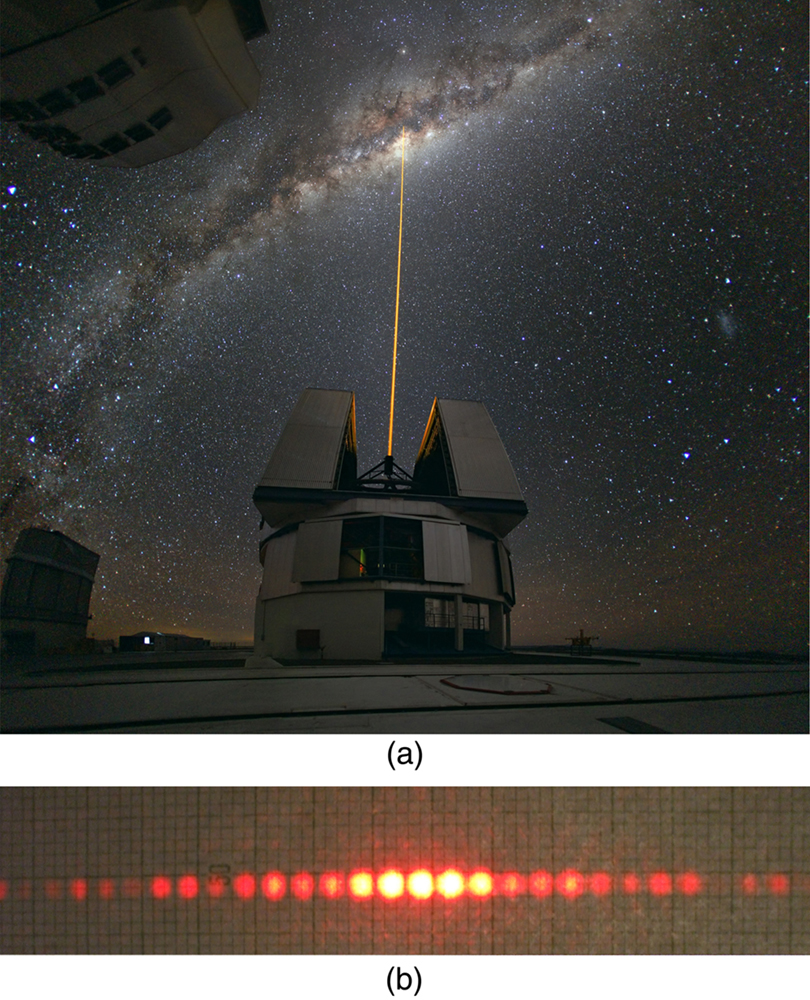 Light has wave characteristics in various media as well as in a vacuum. When light goes from a vacuum to some medium, like water, its speed and wavelength change, but its frequency

remains the same. (We can think of light as a forced oscillation that must have the frequency of the original source.) The speed of light in a medium is

is its index of refraction. If we divide both sides of equation

is the wavelength in a medium and that

is the wavelength in vacuum and

is the medium’s index of refraction. Therefore, the wavelength of light is smaller in any medium than it is in vacuum. In water, for example, which has

, the range of visible wavelengths is

. Although wavelengths change while traveling from one medium to another, colors do not, since colors are associated with frequency.

What type of experimental evidence indicates that light is a wave?

Give an example of a wave characteristic of light that is easily observed outside the laboratory.

Show that when light passes from air to water, its wavelength decreases to 0.750 times its original value.

Find the range of visible wavelengths of light in crown glass.

What is the index of refraction of a material for which the wavelength of light is 0.671 times its value in a vacuum? Identify the likely substance.

Analysis of an interference effect in a clear solid shows that the wavelength of light in the solid is 329 nm. Knowing this light comes from a He-Ne laser and has a wavelength of 633 nm in air, is the substance zircon or diamond?

What is the ratio of thicknesses of crown glass and water that would contain the same number of wavelengths of light?

wavelength in a medium

is the wavelength in vacuum, and

is the index of refraction of the medium