78 Variation of Pressure with Depth in a Fluid

If your ears have ever popped on a plane flight or ached during a deep dive in a swimming pool, you have experienced the effect of depth on pressure in a fluid. At the Earth’s surface, the air pressure exerted on you is a result of the weight of air above you. This pressure is reduced as you climb up in altitude and the weight of air above you decreases. Under water, the pressure exerted on you increases with increasing depth. In this case, the pressure being exerted upon you is a result of both the weight of water above you and that of the atmosphere above you. You may notice an air pressure change on an elevator ride that transports you many stories, but you need only dive a meter or so below the surface of a pool to feel a pressure increase. The difference is that water is much denser than air, about 775 times as dense.

divided by the area

supporting it (the area of the bottom of the container):

We can find the mass of the fluid from its volume and density:

The volume of the fluid

is related to the dimensions of the container. It is

is the cross-sectional area and

is the depth. Combining the last two equations gives

If we enter this into the expression for pressure, we obtain

The area cancels, and rearranging the variables yields

This value is the pressure due to the weight of a fluid. The equation has general validity beyond the special conditions under which it is derived here. Even if the container were not there, the surrounding fluid would still exert this pressure, keeping the fluid static. Thus the equation

The bottom of this container supports the entire weight of the fluid in it. The vertical sides cannot exert an upward force on the fluid (since it cannot withstand a shearing force), and so the bottom must support it all. 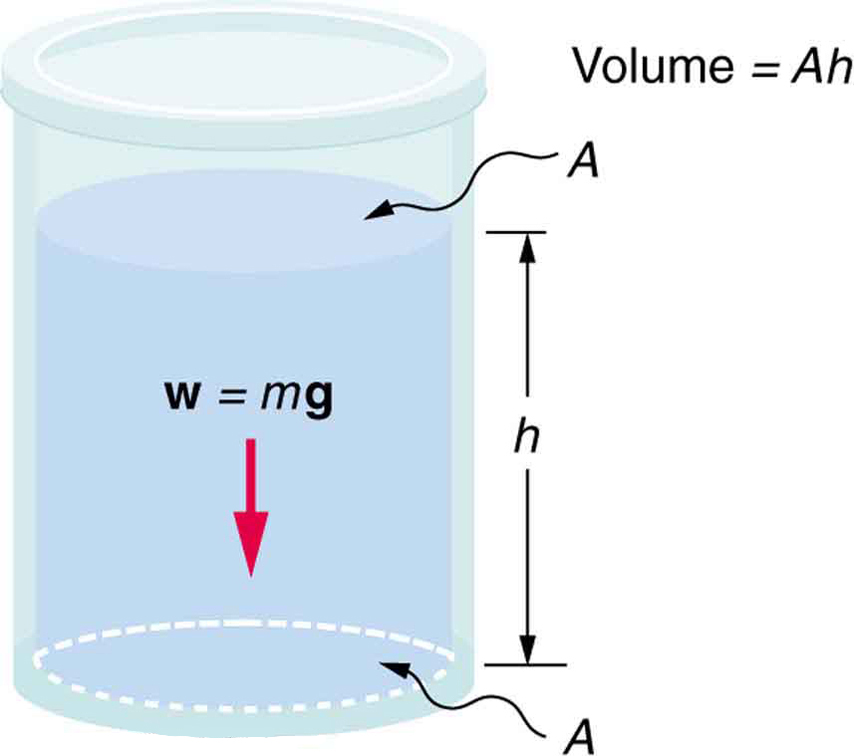 Calculating the Average Pressure and Force Exerted: What Force Must a Dam Withstand?

In (Figure), we calculated the mass of water in a large reservoir. We will now consider the pressure and force acting on the dam retaining water. (See (Figure).) The dam is 500 m wide, and the water is 80.0 m deep at the dam. (a) What is the average pressure on the dam due to the water? (b) Calculate the force exerted against the dam and compare it with the weight of water in the dam (previously found to be

of 40.0 m, since pressure increases linearly with depth.

The average pressure due to the weight of a fluid is

Entering the density of water from (Figure) and taking

The force exerted on the dam by the water is the average pressure times the area of contact:

We have already found the value for

. The area of the dam is

Although this force seems large, it is small compared with the

weight of the water in the reservoir—in fact, it is only

The dam must withstand the force exerted against it by the water it retains. This force is small compared with the weight of the water behind the dam. 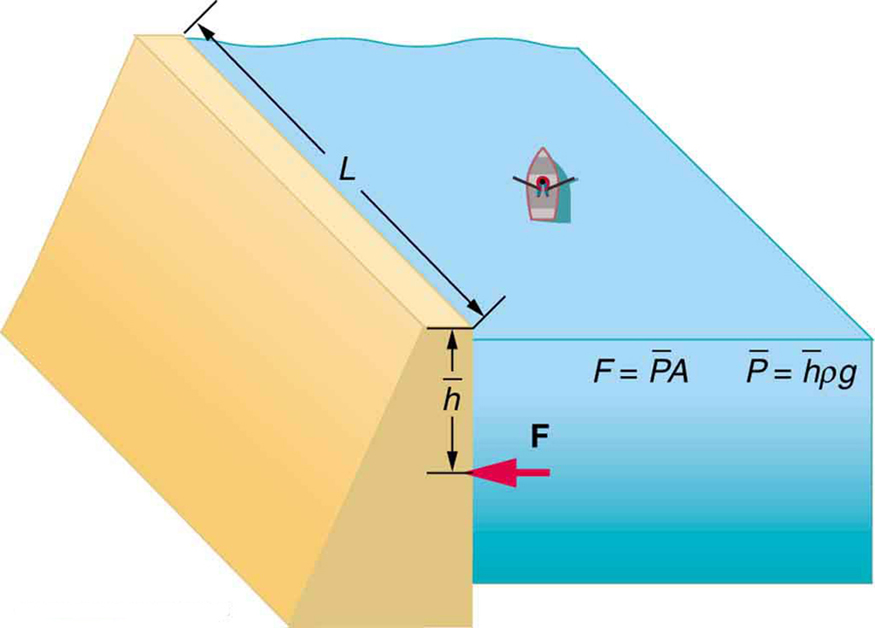 This relationship means that, on average, at sea level, a column of air above

of the Earth’s surface has a weight of

(equivalent to 1 atm), since the column of air over this

, extending to the top of the atmosphere, weighs 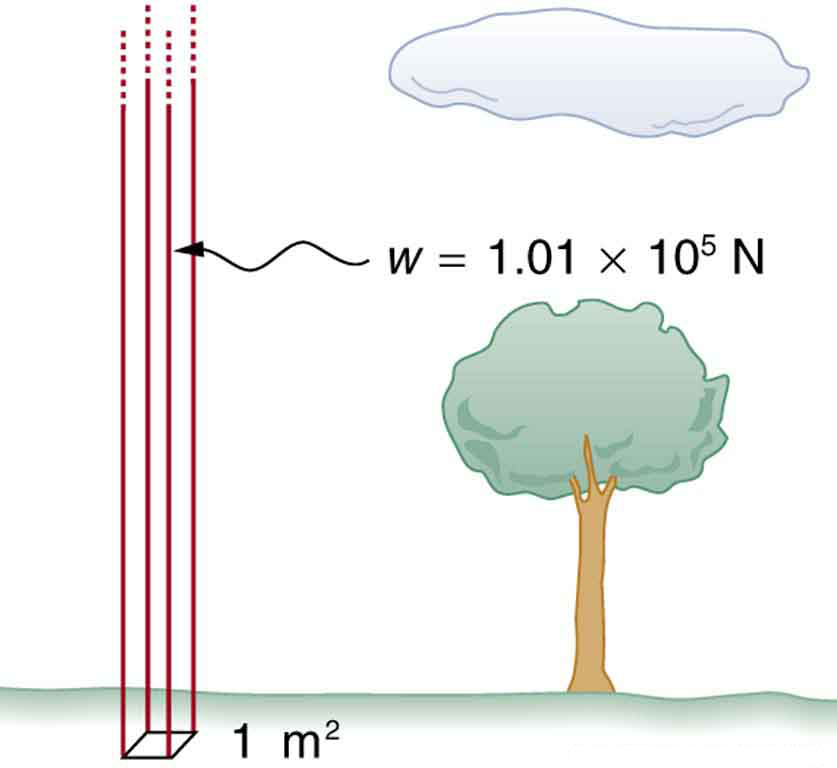 Calculating Average Density: How Dense Is the Air?

Calculate the average density of the atmosphere, given that it extends to an altitude of 120 km. Compare this density with that of air listed in (Figure).

for density, we see that

to be atmospheric pressure,

is known, and so we can use this to calculate

Entering known values into the expression for

—about 15 times its average value. Because air is so compressible, its density has its highest value near the Earth’s surface and declines rapidly with altitude.

Calculating Depth Below the Surface of Water: What Depth of Water Creates the Same Pressure as the Entire Atmosphere?

Calculate the depth below the surface of water at which the pressure due to the weight of the water equals 1.00 atm.

We begin by solving the equation

to be the density of the water that creates the pressure.

Entering the known values into the expression for

Just 10.3 m of water creates the same pressure as 120 km of air. Since water is nearly incompressible, we can neglect any change in its density over this depth.

What do you suppose is the total pressure at a depth of 10.3 m in a swimming pool? Does the atmospheric pressure on the water’s surface affect the pressure below? The answer is yes. This seems only logical, since both the water’s weight and the atmosphere’s weight must be supported. So the total pressure at a depth of 10.3 m is 2 atm—half from the water above and half from the air above. We shall see in Pascal’s Principle that fluid pressures always add in this way.

Atmospheric pressure exerts a large force (equal to the weight of the atmosphere above your body—about 10 tons) on the top of your body when you are lying on the beach sunbathing. Why are you able to get up?

Why does atmospheric pressure decrease more rapidly than linearly with altitude?

What are two reasons why mercury rather than water is used in barometers?

(Figure) shows how sandbags placed around a leak outside a river levee can effectively stop the flow of water under the levee. Explain how the small amount of water inside the column formed by the sandbags is able to balance the much larger body of water behind the levee.

Because the river level is very high, it has started to leak under the levee. Sandbags are placed around the leak, and the water held by them rises until it is the same level as the river, at which point the water there stops rising. 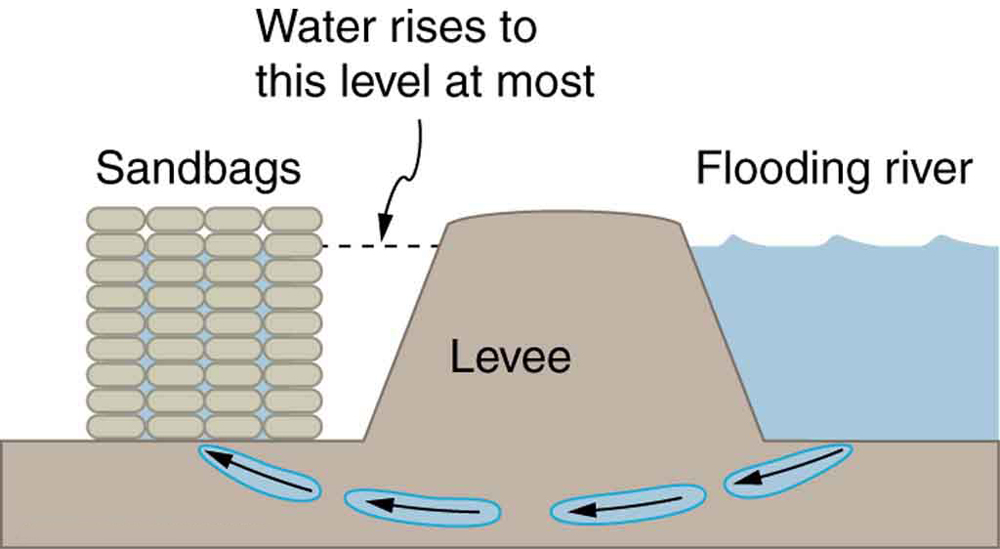 Why is it difficult to swim under water in the Great Salt Lake?

Is there a net force on a dam due to atmospheric pressure? Explain your answer.

What depth of mercury creates a pressure of 1.00 atm?

The greatest ocean depths on the Earth are found in the Marianas Trench near the Philippines. Calculate the pressure due to the ocean at the bottom of this trench, given its depth is 11.0 km and assuming the density of seawater is constant all the way down.

Verify that the SI unit of

Water towers store water above the level of consumers for times of heavy use, eliminating the need for high-speed pumps. How high above a user must the water level be to create a gauge pressure of

The aqueous humor in a person’s eye is exerting a force of 0.300 N on the

area of the cornea. (a) What pressure is this in mm Hg? (b) Is this value within the normal range for pressures in the eye?

How much force is exerted on one side of an 8.50 cm by 11.0 cm sheet of paper by the atmosphere? How can the paper withstand such a force?

and he exerts a force of 800 N on it. Express the pressure in

and compare it with the

What force does it exert to accomplish this?

Show that the total force on a rectangular dam due to the water behind it increases with the square of the water depth. In particular, show that this force is given by

is the density of water,

is its depth at the dam, and

is the length of the dam. You may assume the face of the dam is vertical. (Hint: Calculate the average pressure exerted and multiply this by the area in contact with the water. (See (Figure).)