What It Means to Do Work

For work, in the scientific sense, to be done, a force must be exerted and there must be displacement in the direction of the force.

Formally, the work done on a system by a constant force is defined to be the product of the component of the force in the direction of motion times the distance through which the force acts. For one-way motion in one dimension, this is expressed in equation form as

is the displacement of the system, and

is the angle between the force vector

and the displacement vector

To find the work done on a system that undergoes motion that is not one-way or that is in two or three dimensions, we divide the motion into one-way one-dimensional segments and add up the work done over each segment.

The work done on a system by a constant force is the product of the component of the force in the direction of motion times the distance through which the force acts. For one-way motion in one dimension, this is expressed in equation form as

is the magnitude of the force on the system,

is the magnitude of the displacement of the system, and

is the angle between the force vector

and the displacement vector

Examples of work. (a) The work done by the force

on this lawn mower is

are in opposite directions. 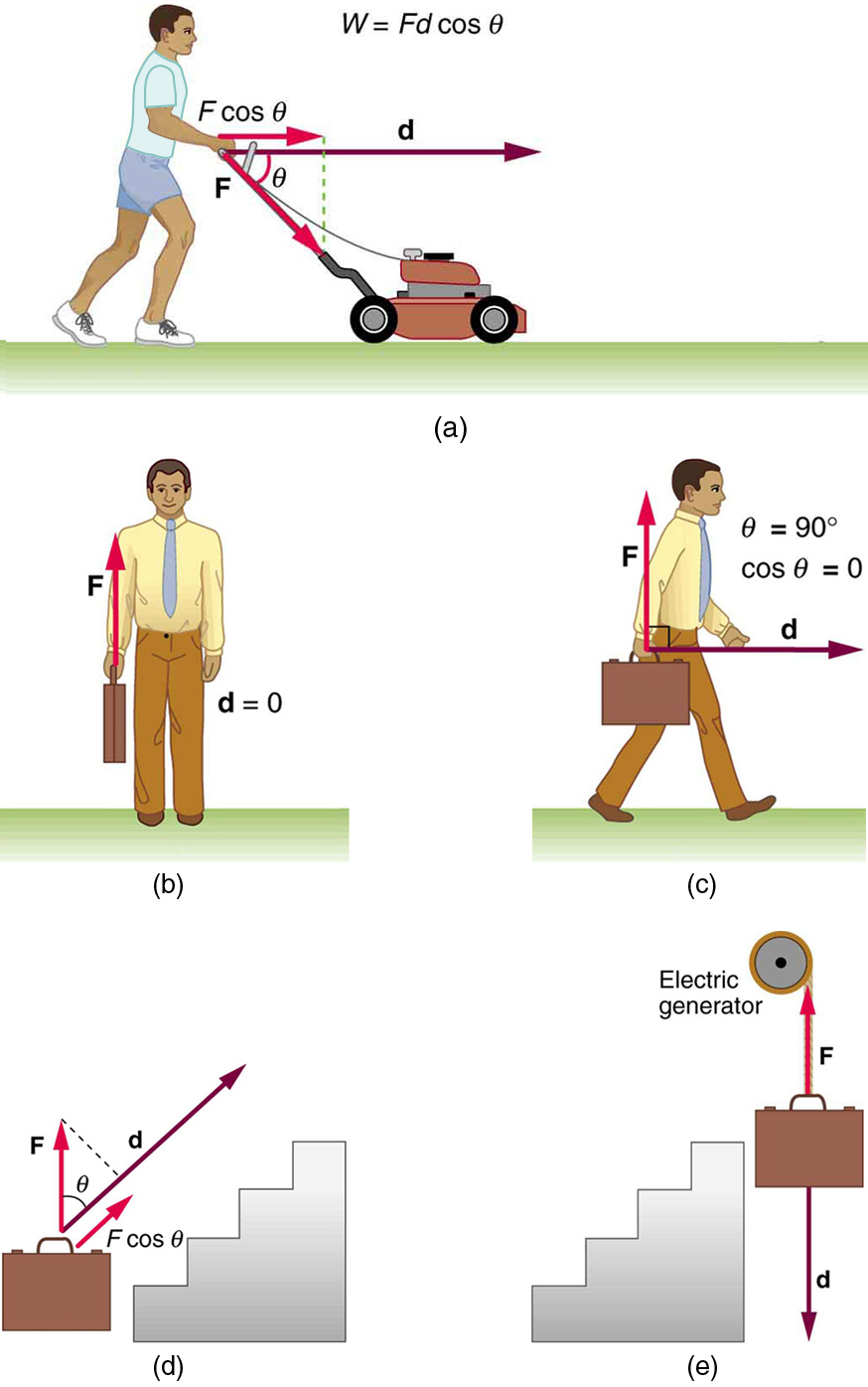 To examine what the definition of work means, let us consider the other situations shown in (Figure). The person holding the briefcase in (Figure)(b) does no work, for example. Here

. Why is it you get tired just holding a load? The answer is that your muscles are doing work against one another, but they are doing no work on the system of interest (the “briefcase-Earth system”—see Gravitational Potential Energy for more details). There must be displacement for work to be done, and there must be a component of the force in the direction of the motion. For example, the person carrying the briefcase on level ground in (Figure)(c) does no work on it, because the force is perpendicular to the motion. That is,

Work and energy have the same units. From the definition of work, we see that those units are force times distance. Thus, in SI units, work and energy are measured in newton-meters. A newton-meter is given the special name joule (J), and

. One joule is not a large amount of energy; it would lift a small 100-gram apple a distance of about 1 meter.

below the horizontal and pushes the mower

on level ground? Convert the amount of work from joules to kilocalories and compare it with this person’s average daily intake of

) of food energy. One calorie (1 cal) of heat is the amount required to warm 1 g of water by

, and is equivalent to

, while one food calorie (1 kcal) is equivalent to

We can solve this problem by substituting the given values into the definition of work done on a system, stated in the equation

. The force, angle, and displacement are given, so that only the work

The equation for the work is

Converting the work in joules to kilocalories yields

. The ratio of the work done to the daily consumption is

This ratio is a tiny fraction of what the person consumes, but it is typical. Very little of the energy released in the consumption of food is used to do work. Even when we “work” all day long, less than 10% of our food energy intake is used to do work and more than 90% is converted to thermal energy or stored as chemical energy in fat.

Give an example of something we think of as work in everyday circumstances that is not work in the scientific sense. Is energy transferred or changed in form in your example? If so, explain how this is accomplished without doing work.

Give an example of a situation in which there is a force and a displacement, but the force does no work. Explain why it does no work.

Describe a situation in which a force is exerted for a long time but does no work. Explain.

How much work does a supermarket checkout attendant do on a can of soup he pushes 0.600 m horizontally with a force of 5.00 N? Express your answer in joules and kilocalories.

Suppose a car travels 108 km at a speed of 30.0 m/s, and uses 2.0 gal of gasoline. Only 30% of the gasoline goes into useful work by the force that keeps the car moving at constant speed despite friction. (See (Figure) for the energy content of gasoline.) (a) What is the magnitude of the force exerted to keep the car moving at constant speed? (b) If the required force is directly proportional to speed, how many gallons will be used to drive 108 km at a speed of 28.0 m/s?

Calculate the work done by an 85.0-kg man who pushes a crate 4.00 m up along a ramp that makes an angle of

with the horizontal. (See (Figure).) He exerts a force of 500 N on the crate parallel to the ramp and moves at a constant speed. Be certain to include the work he does on the crate and on his body to get up the ramp.

A man pushes a crate up a ramp.

How much work is done by the boy pulling his sister 30.0 m in a wagon as shown in (Figure)? Assume no friction acts on the wagon.

The boy does work on the system of the wagon and the child when he pulls them as shown. 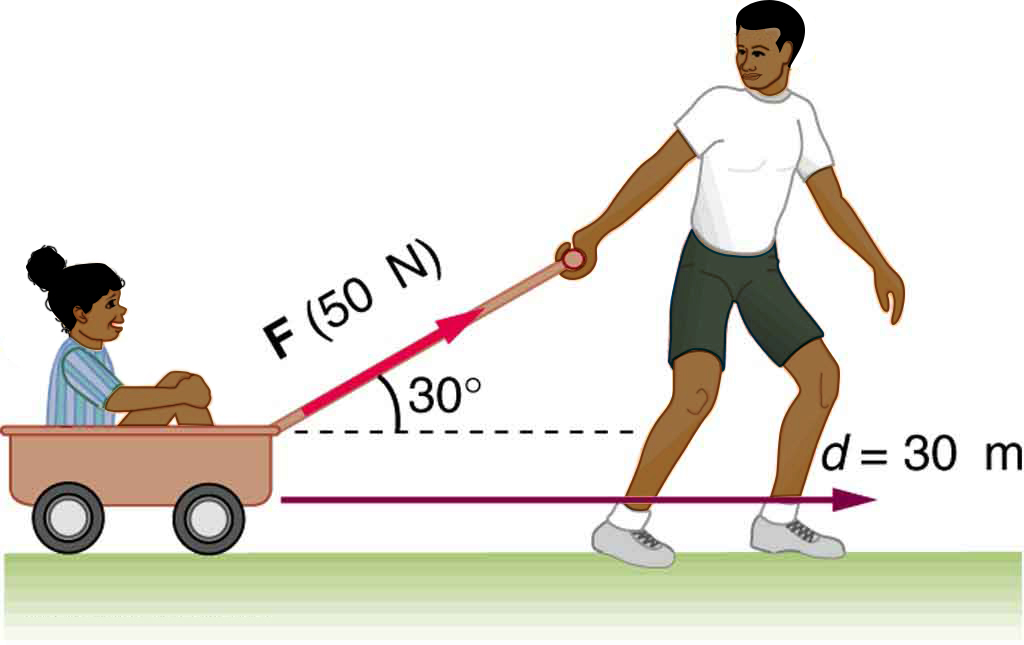 A shopper pushes a grocery cart 20.0 m at constant speed on level ground, against a 35.0 N frictional force. He pushes in a direction

Suppose the ski patrol lowers a rescue sled and victim, having a total mass of 90.0 kg, down a

A rescue sled and victim are lowered down a steep slope.

energy
the ability to do work

joule
SI unit of work and energy, equal to one newton-meter