Although Christiaan Huygens thought that light was a wave, Isaac Newton did not. Newton felt that there were other explanations for color, and for the interference and diffraction effects that were observable at the time. Owing to Newton’s tremendous stature, his view generally prevailed. The fact that Huygens’s principle worked was not considered evidence that was direct enough to prove that light is a wave. The acceptance of the wave character of light came many years later when, in 1801, the English physicist and physician Thomas Young (1773–1829) did his now-classic double slit experiment (see (Figure)).

Young’s double slit experiment. Here pure-wavelength light sent through a pair of vertical slits is diffracted into a pattern on the screen of numerous vertical lines spread out horizontally. Without diffraction and interference, the light would simply make two lines on the screen. 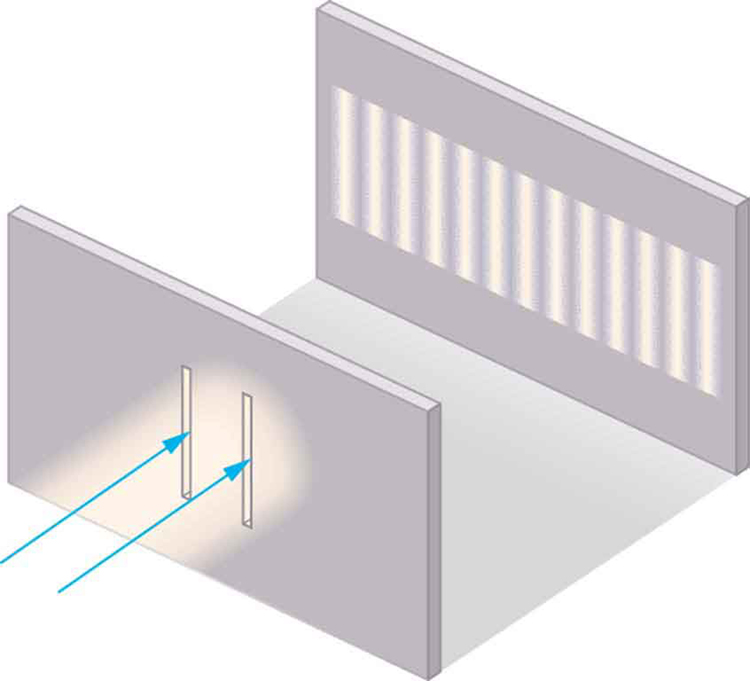 Why do we not ordinarily observe wave behavior for light, such as observed in Young’s double slit experiment? First, light must interact with something small, such as the closely spaced slits used by Young, to show pronounced wave effects. Furthermore, Young first passed light from a single source (the Sun) through a single slit to make the light somewhat coherent. By coherent, we mean waves are in phase or have a definite phase relationship. Incoherent means the waves have random phase relationships. Why did Young then pass the light through a double slit? The answer to this question is that two slits provide two coherent light sources that then interfere constructively or destructively. Young used sunlight, where each wavelength forms its own pattern, making the effect more difficult to see. We illustrate the double slit experiment with monochromatic (single

) light to clarify the effect. (Figure) shows the pure constructive and destructive interference of two waves having the same wavelength and amplitude. 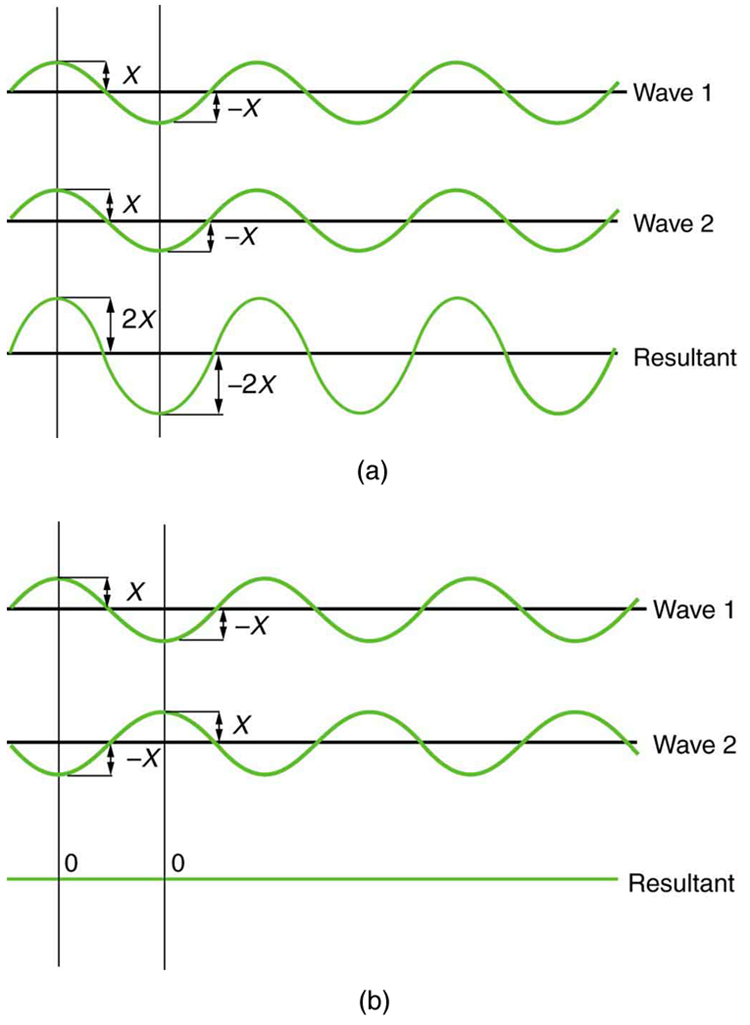 When light passes through narrow slits, it is diffracted into semicircular waves, as shown in (Figure)(a). Pure constructive interference occurs where the waves are crest to crest or trough to trough. Pure destructive interference occurs where they are crest to trough. The light must fall on a screen and be scattered into our eyes for us to see the pattern. An analogous pattern for water waves is shown in (Figure)(b). Note that regions of constructive and destructive interference move out from the slits at well-defined angles to the original beam. These angles depend on wavelength and the distance between the slits, as we shall see below.

Double slits produce two coherent sources of waves that interfere. (a) Light spreads out (diffracts) from each slit, because the slits are narrow. These waves overlap and interfere constructively (bright lines) and destructively (dark regions). We can only see this if the light falls onto a screen and is scattered into our eyes. (b) Double slit interference pattern for water waves are nearly identical to that for light. Wave action is greatest in regions of constructive interference and least in regions of destructive interference. (c) When light that has passed through double slits falls on a screen, we see a pattern such as this. (credit: PASCO) 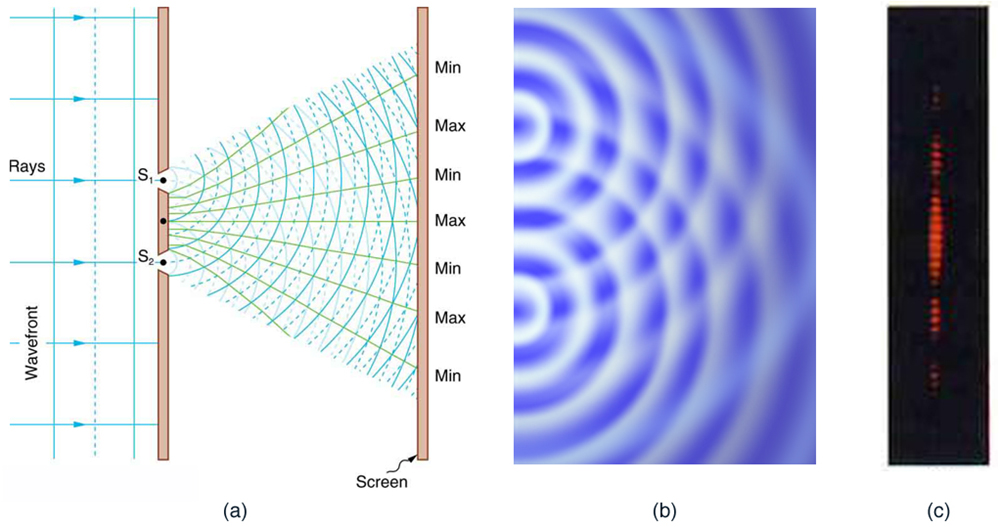 To understand the double slit interference pattern, we consider how two waves travel from the slits to the screen, as illustrated in (Figure). Each slit is a different distance from a given point on the screen. Thus different numbers of wavelengths fit into each path. Waves start out from the slits in phase (crest to crest), but they may end up out of phase (crest to trough) at the screen if the paths differ in length by half a wavelength, interfering destructively as shown in (Figure)(a). If the paths differ by a whole wavelength, then the waves arrive in phase (crest to crest) at the screen, interfering constructively as shown in (Figure)(b). More generally, if the paths taken by the two waves differ by any half-integral number of wavelengths [

, etc.], then destructive interference occurs. Similarly, if the paths taken by the two waves differ by any integral number of wavelengths (

Look at a light, such as a street lamp or incandescent bulb, through the narrow gap between two fingers held close together. What type of pattern do you see? How does it change when you allow the fingers to move a little farther apart? Is it more distinct for a monochromatic source, such as the yellow light from a sodium vapor lamp, than for an incandescent bulb? 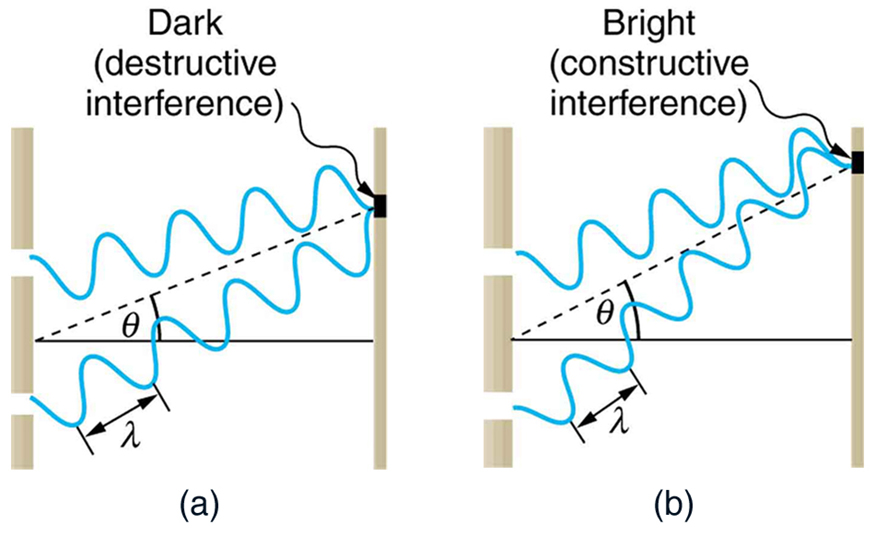 (Figure) shows how to determine the path length difference for waves traveling from two slits to a common point on a screen. If the screen is a large distance away compared with the distance between the slits, then the angle

between the path and a line from the slits to the screen (see the figure) is nearly the same for each path. The difference between the paths is shown in the figure; simple trigonometry shows it to be

is the distance between the slits. To obtain constructive interference for a double slit, the path length difference must be an integral multiple of the wavelength, or

Similarly, to obtain destructive interference for a double slit, the path length difference must be a half-integral multiple of the wavelength, or

is the wavelength of the light,

is the distance between slits, and

is the angle from the original direction of the beam as discussed above. We call

the order of the interference. For example, 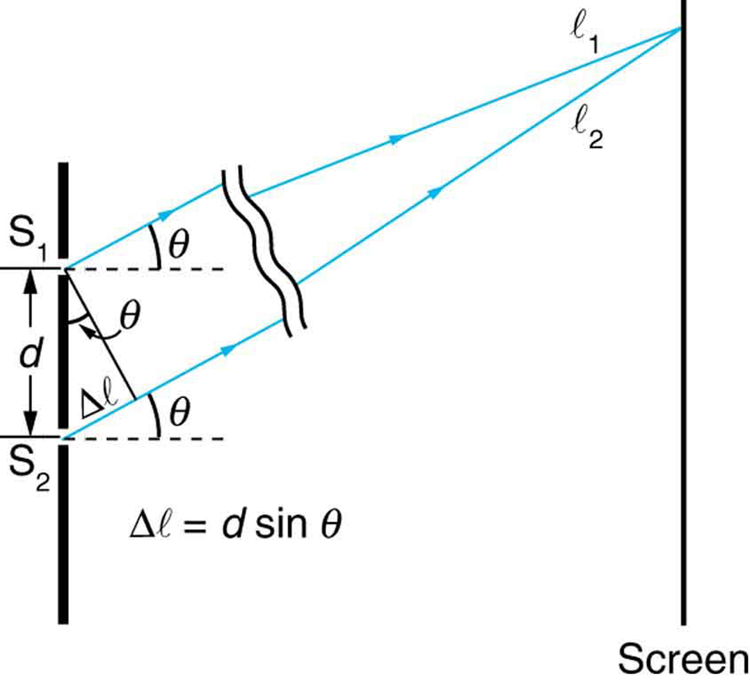 The equations for double slit interference imply that a series of bright and dark lines are formed. For vertical slits, the light spreads out horizontally on either side of the incident beam into a pattern called interference fringes, illustrated in (Figure). The intensity of the bright fringes falls off on either side, being brightest at the center. The closer the slits are, the more is the spreading of the bright fringes. We can see this by examining the equation

. This is consistent with our contention that wave effects are most noticeable when the object the wave encounters (here, slits a distance

The interference pattern for a double slit has an intensity that falls off with angle. The photograph shows multiple bright and dark lines, or fringes, formed by light passing through a double slit. 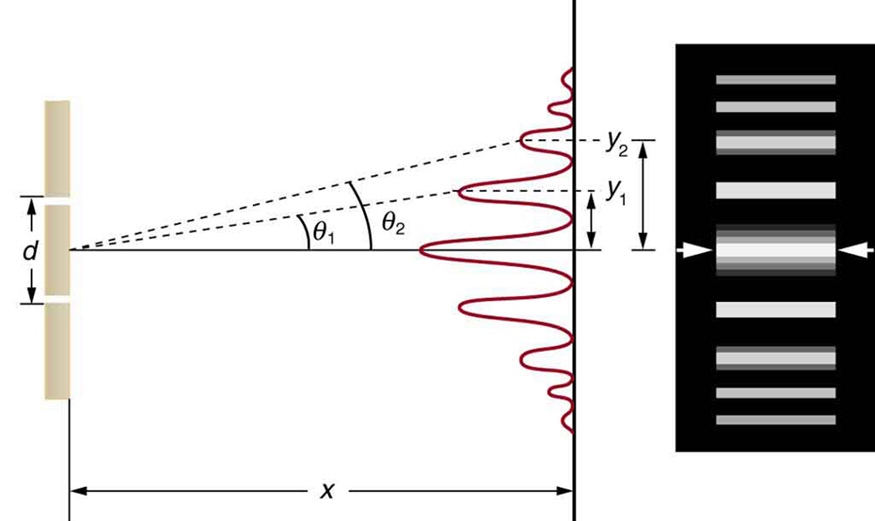 Finding a Wavelength from an Interference Pattern

Suppose you pass light from a He-Ne laser through two slits separated by 0.0100 mm and find that the third bright line on a screen is formed at an angle of

relative to the incident beam. What is the wavelength of the light?

The third bright line is due to third-order constructive interference, which means that

. The wavelength can thus be found using the equation

. Solving for the wavelength

To three digits, this is the wavelength of light emitted by the common He-Ne laser. Not by coincidence, this red color is similar to that emitted by neon lights. More important, however, is the fact that interference patterns can be used to measure wavelength. Young did this for visible wavelengths. This analytical technique is still widely used to measure electromagnetic spectra. For a given order, the angle for constructive interference increases with

, so that spectra (measurements of intensity versus wavelength) can be obtained.

Interference patterns do not have an infinite number of lines, since there is a limit to how big

can be. What is the highest-order constructive interference possible with the system described in the preceding example?

is. However, the maximum value that

can have is 1, for an angle of

. (Larger angles imply that light goes backward and does not reach the screen at all.) Let us find which

corresponds to this maximum diffraction angle.

and substituting the values of

from the preceding example gives

Young’s double slit experiment breaks a single light beam into two sources. Would the same pattern be obtained for two independent sources of light, such as the headlights of a distant car? Explain.

Suppose you use the same double slit to perform Young’s double slit experiment in air and then repeat the experiment in water. Do the angles to the same parts of the interference pattern get larger or smaller? Does the color of the light change? Explain.

Is it possible to create a situation in which there is only destructive interference? Explain.

At what angle is the first-order maximum for 450-nm wavelength blue light falling on double slits separated by 0.0500 mm?

Calculate the angle for the third-order maximum of 580-nm wavelength yellow light falling on double slits separated by 0.100 mm.

when falling on double slits separated by

. Explicitly, show how you follow the steps in Problem-Solving Strategies for Wave Optics.

if the third-order maximum is at an angle of

At what angle is the fourth-order maximum for the situation in (Figure)?

for which there is a first-order maximum. Is this in the visible part of the spectrum?

What is the smallest separation between two slits that will produce a second-order maximum for 720-nm red light?

(a) What is the smallest separation between two slits that will produce a second-order maximum for any visible light? (b) For all visible light?

from a screen, with the distance from the center of the screen given by

between the slits is relatively large, there will be numerous bright spots, called fringes. Show that, for small angles (where

in radians), the distance between fringes is given by

The distance between adjacent fringes is

is large compared with 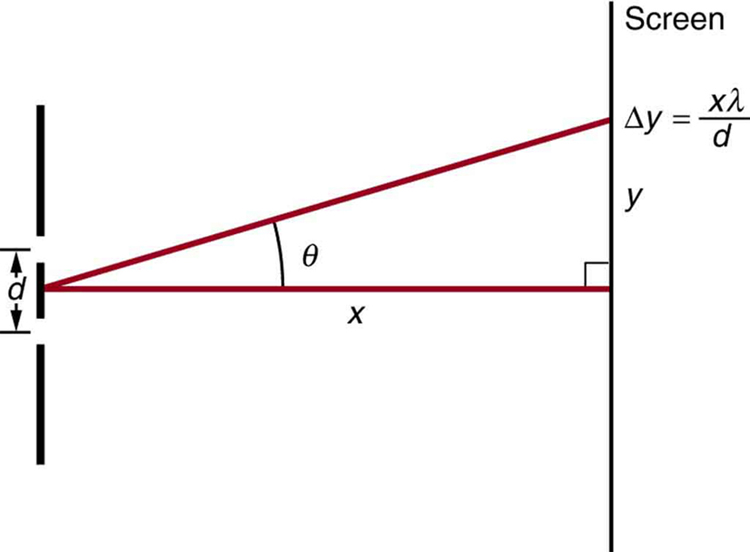 For two adjacent fringes we have,

Using the result of the problem above, calculate the distance between fringes for 633-nm light falling on double slits separated by 0.0800 mm, located 3.00 m from a screen as in (Figure).

Using the result of the problem two problems prior, find the wavelength of light that produces fringes 7.50 mm apart on a screen 2.00 m from double slits separated by 0.120 mm (see (Figure)).

coherent
waves are in phase or have a definite phase relationship