In our discussion of long-term debt amortization, we will examine both notes payable and bonds. While they have some structural differences, they are similar in the creation of their amortization documentation.

When a consumer borrows money, she can expect to not only repay the amount borrowed, but also to pay interest on the amount borrowed. When she makes periodic loan payments that pay back the principal and interest over time with payments of equal amounts, these are considered fully amortized notes. In these timed payments, part of what she pays is interest. The amount borrowed that is still due is often called the principal. After she has made her final payment, she no longer owes anything, and the loan is fully repaid, or amortized. Amortization is the process of separating the principal and interest in the loan payments over the life of a loan. A fully amortized loan is fully paid by the end of the maturity period.

In the following example, assume that the borrower acquired a five-year, $10,000 loan from a bank. She will repay the loan with five equal payments at the end of the year for the next five years. The bank’s required interest rate is an annual rate of 12%.

Interest rates are typically quoted in annual terms. Since her interest rate is 12% a year, the borrower must pay 12% interest each year on the principal that she owes. As stated above, these are equal annual payments, and each payment is first applied to any applicable interest expenses, with the remaining funds reducing the principal balance of the loan.

After each payment in a fully amortizing loan, the principal is reduced, which means that since the five payment amounts are equal, the portion allocated to interest is reduced each year, and the amount allocated to principal reduction increases an equal amount.

The first step in preparing an amortization table is to determine the annual loan payment. The $10,000 loan amount is the value today and, in financial terms, is called the present value (PV). Since repayment will be in a series of five equal payments, it is an annuity. Look up the PV from an annuity table for 5 periods and 12% interest. The factor is 3.605. Dividing the principal, $10,000, by the factor 3.605 gives us $2,773.93, which is the amount of each yearly payment. For the rest of the chapter, we will provide the necessary data, such as bond prices and payment amounts; you will not need to use the present value tables.

(Figure) shows an amortization table for this $10,000 loan, over five years at 12% annual interest. Assume that the final payment will be $2,774.99 in order to eliminate the potential rounding error of $1.06.

Amortization Table. An amortization table shows how payments are applied to interest in principal for the life of the loan. (attribution: Copyright Rice University, OpenStax, under CC BY-NC-SA 4.0 license)

Creating Your Own Amortization Table

The straight-line method doesn’t base its calculation of amortization for a period base on a changing carrying value like the effective-interest method does; instead, it allocates the same amount of premium or discount amortation for each of the bond’s payment periods.

Assume a company issues a $100,000 bond with a 5% stated rate when the market rate is also 5%. The bond was issued at par, meaning it sold for $100,000. There was no premium or discount to amortize, so there is no application of the effective-interest method in this example.

Issued at a Premium

The same company also issued a 5-year, $100,000 bond with a stated rate of 5% when the market rate was 4%. This bond was issued at a premium, for $104,460. The amount of the premium is $4,460, which will be amortized over the life of the bond using the effective-interest method. This method of amortizing the interest expense associated with a bond is similar to the amortization of the note payable described earlier, in which the principal was separated from the interest payments using the interest rate times the principal. 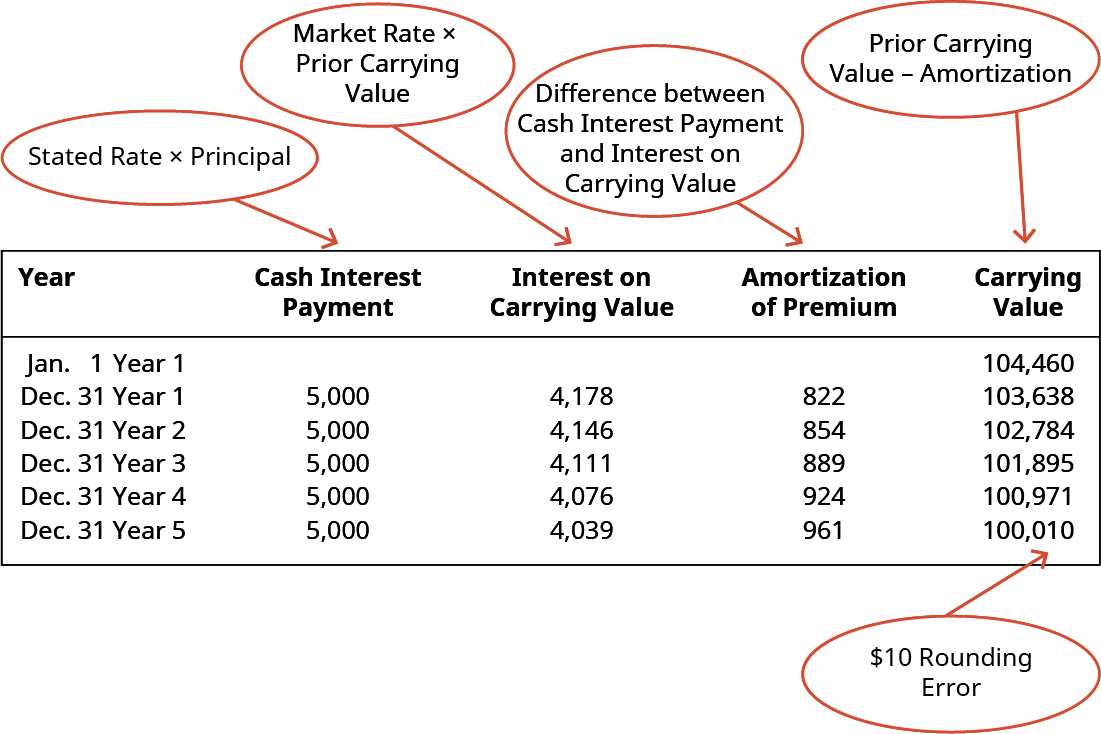 Issued at a Discount

(Figure) illustrates the relationship between rates whenever a premium or discount is created at bond issuance.

One resource investors find useful when screening investment opportunities is through the use of rating agencies. Rating agencies specialize in analyzing financial and other company information in order to assess and rate a company’s riskiness as an investment. A particularly useful website is Investopedia which highlights the rating system for three large rating agencies—Moody’s, Standard & Poor’s, and Fitch Ratings. The rating systems, shown below, are somewhat similar to academic grading scales, with rankings ranging from A (highest quality) to D (lowest quality):

(Figure)When a bond sells at a discount, the carrying value ________ after each amortization entry.

(Figure)The International Financial Reporting Standards require the use of ________.

(Figure)The cash interest payment a corporation makes to its bondholders is based on ________.

(Figure)An amortization table/schedule is created to compute the amount to be amortized each year. What are the four columns needed to prepare the table?

It is the difference between the cash interest payment and the interest on the carrying value.

(Figure)Does issuing a bond at a discount increase or decrease interest expense over the life of the bond?

(Figure)Why is the effective-interest method of amortization required under the International Financial Reporting Standards?

(Figure)Haiku Inc. issued $600,000 of 10-year bonds with a stated rate of 11% when the market rate was 12%. The bonds pay interest semi-annually. Prepare the first three years of an amortization schedule. Assume that the bonds were issued for $565,710.

(Figure)Waldron Inc. issued $400,000 bonds with a stated rate of 7% when the market rate was 5%. They are 3-year bonds with interest to be paid annually. Prepare a table to amortize the premium of the bonds. Assume that the bonds were issued for $421,844.

(Figure)Evie Inc. issued 50 bonds with a $1,000 face value, a five-year life, and a stated annual coupon of 6% for $980 each. What is the total amount of interest expense over the life of the bonds?

amortization
allocation of the costs of intangible assets over their useful economic lives; also, process of separating the principal and interest in loan payments over the life of a loan