Intangible assets can be difficult to understand and incorporate into the decision-making process. In this section we explain them in more detail and provide examples of how to amortize each type of intangible asset.

While copyrights have a finite life span of 70 years beyond the author’s death, they are amortized over their estimated useful life. Therefore, if a company acquired a copyright on a new graphic novel for $10,000 and estimated it would be able to sell that graphic novel for the next ten years, it would amortize $1,000 a year ($10,000/ten years), and the journal entry would be as shown. Assume that the novel began sales on January 1, 2019.

Patents are issued to the inventor of the product by the federal government and last twenty years. All costs associated with creating the product being patented (such as research and development costs) are expensed; however, direct costs to obtain the patent could be capitalized. Otherwise, patents are capitalized only when purchased. Like copyrights, patents are amortized over their useful life, which can be shorter than twenty years due to changing technology. Assume Mech Tech purchased the patent for a new pump system. The patent cost $20,000, and the company expects the pump to be a useful product for the next twenty years. Mech Tech will then amortize the $20,000 over the next twenty years, which is $1,000 a year.

Companies can register their trademarks with the federal government for ten years with the opportunity to renew the trademark every ten years. Trademarks are recorded as assets only when they are purchased from another company and are valued based on market price at the time of purchase. In this case, these trademarks are amortized over the expected useful life. In some cases, the trademark may be seen as having an indefinite life, in which case there would be no amortization.

From an accounting standpoint, goodwill is internally generated and is not recorded as an asset unless it is purchased during the acquisition of another company. The purchase of goodwill occurs when one company buys another company for an amount greater than the total value of the company’s net assets. The value difference between net assets and the purchase price is then recorded as goodwill on the purchaser’s financial statements. For example, say the London Hoops professional basketball team was sold for $10 million. The new owner received net assets of $7 million, so the goodwill (value of the London Hoops above its net assets) is $3 million. The following journal entry shows how the new owner would record this purchase.

Goodwill does not have an expected life span and therefore is not amortized. However, a company is required to compare the book value of goodwill to its market value at least annually to determine if it needs to be adjusted. This comparison process is called testing for impairment. If the market value of goodwill is found to be lower than the book value, then goodwill needs to be reduced to its market value. If goodwill is impaired, it is reduced with a credit, and an impairment loss is debited. Goodwill is never increased beyond its original cost. For example, if the new owner of London Hoops assesses that London Hoops now has a fair value of $9,000,000 rather than the $10,000,000 of the original purchase, the owner would need to record the impairment as shown in the following journal entry.

Apple Inc. had goodwill of $5,717,000,000 on its 2017 balance sheet. Explore Apple, Inc.’s U.S. Securities and Exchange Commission 10-K Filing for notes that discuss goodwill and whether Apple has had to adjust for the impairment of this asset in recent years.

(Figure)How are intangible assets with an indefinite life treated?

(Figure)Which of the following represents an event that is less routine when accounting for long-term assets?

(Figure)Which of the following is true regarding special issues in accounting for long-term assets?

(Figure)The loss in value from all causes within a property except those due to physical deterioration is known as which of the following?

(Figure)What is goodwill, and what are the unique aspects of accounting for it?

Goodwill is internally generated, but it is not recorded as an asset unless (and only when) one company acquires another company at a price greater than the total value of the net assets being purchased. The purchaser will record goodwill for the difference between the fair value of net assets acquired and the purchase price. Goodwill is not amortized and will be tested annually for impairment.

For each of these situations, determine the useful life over which Goldstein will amortize the intangible assets.

Determine the annual amortization amount for each intangible asset.

(Figure)For each of the following unrelated situations, calculate the annual amortization expense and prepare a journal entry to record the expense:

(Figure)Prepare the assets section of the balance sheet as of December 31 for Hooper’s International using the following information: 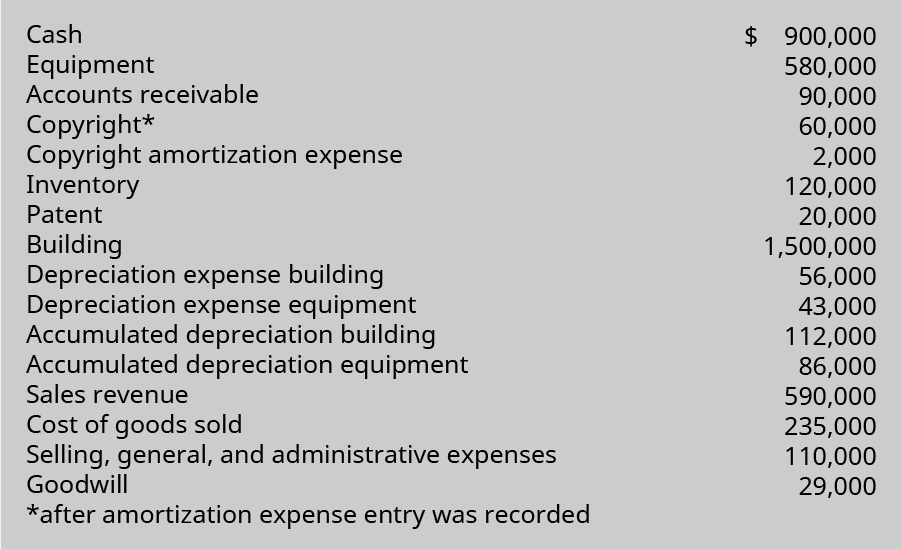 (Figure)For each of the following unrelated situations, calculate the annual amortization expense and prepare a journal entry to record the expense:

(Figure)Farm Fresh Agriculture Company purchased Sunny Side Egg Distribution for $400,000 cash when Sunny Side had net assets worth $390,000.

(Figure)Malone Industries has been in business for five years and has been very successful. In the past year, it expanded operations by buying Hot Metal Manufacturing for a price greater than the value of the net assets purchased. In the past year, the customer base has expanded much more than expected, and the company’s owners want to increase the goodwill account. Your CPA firm has been hired to help Malone prepare year-end financial statements, and your boss has asked you to talk to Malone’s managers about goodwill and whether an adjustment can be made to the goodwill account. How do you respond to the owners and managers?