Our discussion of CVP analysis has focused on the sales necessary to break even or to reach a desired profit, but two other concepts are useful regarding our break-even sales. Those concepts are margin of safety and operating leverage.

Let’s look at Manteo Machine, a company that machines parts that are then sold and used in the manufacture of farm equipment. For their core product, the break-even analysis is as follows:

Interpreting this information tells Manteo Machine that, when sales equal ?153,000, they will be at the break-even point. However, as soon as sales fall below this figure, they will have negative net operating income. They have decided that they want a margin of safety of ?10,000. They can add this as if it were a fixed cost (very much the same way we added target profit earlier) and then find a new break-even point that includes a ?10,000 margin of safety. If they approached it from this perspective, their new break-even would appear as follows:

From this analysis, Manteo Machine knows that sales will have to decrease by ?72,000 from their current level before they revert to break-even operations and are at risk to suffer a loss.

The Importance of Relevant Range Analysis

Ethical managerial decision-making requires that information be communicated fairly and objectively. The failure to include the demand for individual products in the company’s mixture of products may be misleading. Providing misleading or inaccurate managerial accounting information can lead to a company becoming unprofitable. Ignoring relevant range(s) in setting assumptions about cost behavior and ignoring the actual demand for the product in the company’s market also distorts the information provided to management and may cause the management of the company to produce products that cannot be sold.

Previously, we calculated Manteo Machine’s margin of safety as ?72,000. As a percentage, it would be

This tells management that as long as sales do not decrease by more than 32%, they will not be operating at or near the break-even point, where they would run a higher risk of suffering a loss. Often, the margin of safety is determined when sales budgets and forecasts are made at the start of the fiscal year and also are regularly revisited during periods of operational and strategic planning.

In much the same way that managers control the risk of incurring a net loss by watching their margin of safety, being aware of the company’s operating leverage is critical to the financial well-being of the firm. Operating leverage is a measurement of how sensitive net operating income is to a percentage change in sales dollars. Typically, the higher the level of fixed costs, the higher the level of risk. However, as sales volumes increase, the payoff is typically greater with higher fixed costs than with higher variable costs. In other words, the higher the risk the greater the payoff.

First, let’s look at this from a general example to understand payoff. Suppose you had ?10,000 to invest and you were debating between putting that money in low risk bonds earning 3% or taking a chance and buying stock in a new company that currently is not profitable but has an innovative product that many analysts predict will take off and be the next “big thing.” Obviously, there is more risk with buying the stock than with buying the bonds. If the company remains unprofitable, or fails, you stand to lose all or a portion of your investment ,whereas the bonds are less risky and will continue to pay 3% interest. However, the risk associated with the stock investment could result in a much higher payoff if the company is successful.

So how does this relate to fixed costs and companies? Companies have many types of fixed costs including salaries, insurance, and depreciation. These costs are present regardless of our production or sales levels. This makes fixed costs riskier than variable costs, which only occur if we produce and sell items or services. As we sell items, we have learned that the contribution margin first goes to meeting fixed costs and then to profits. Here is an example of how changes in fixed costs affects profitability.

As you can see from this example, moving variable costs to fixed costs, such as making hourly employees salaried, is riskier in that fixed costs are higher. However, the payoff, or resulting net income, is higher as sales volume increases.

This is why companies are so concerned with managing their fixed and variable costs and will sometimes move costs from one category to another to manage this risk. Some examples include, as previously mentioned, moving hourly employees (variable) to salaried employees (fixed), or replacing an employee (variable) with a machine (fixed). Keep in mind that managing this type of risk not only affects operating leverage but can have an effect on morale and corporate climate as well.

Operating leverage fluctuations result from changes in a company’s cost structure. While any change in either variable or fixed costs will change operating leverage, the fluctuations most often result from management’s decision to shift costs from one category to another. As the next example shows, the advantage can be great when there is economic growth (increasing sales); however, the disadvantage can be just as great when there is economic decline (decreasing sales). This is the risk that must be managed when deciding how and when to cause operating leverage to fluctuate. 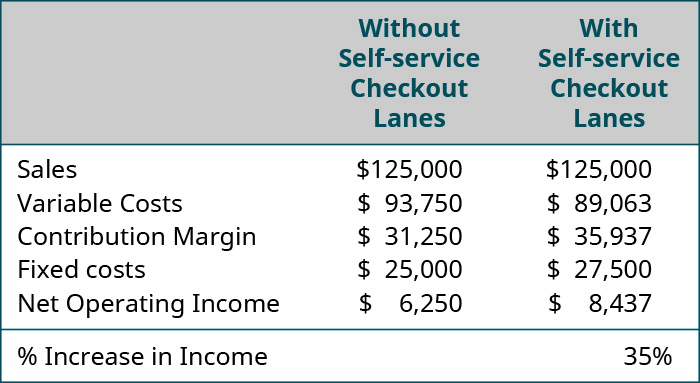 The company in this example also faces a downside risk, however. If customers disliked the change enough that sales decreased by more than 6%, net operating income would drop below the original level of ?6,250 and could even become a loss.

Operating leverage has a multiplier effect. A multiplier effect is one in which a change in an input (such as variable cost per unit) by a certain percentage has a greater effect (a higher percentage effect) on the output (such as net income). To explain the concept of a multiplier effect, think of having to open a very large, heavy wooden crate. You could pull and pull with your hands all day and still not exert enough force to get it open. But, what if you used a lever in the form of a pry bar to multiply your effort and strength? For every additional amount of force you apply to the pry bar, a much larger amount of force is applied to the crate. Before you know it, you have the crate open. Operating leverage works much like that pry bar: if operating leverage is high, then a very small increase in sales can result in a large increase in net operating income.

During periods of sales downturns, there are many examples of companies working to shift costs away from fixed costs. This Yahoo Finance article reports that many airlines are changing their cost structure to move away from fixed costs and toward variable costs such as Delta Airlines. Although they are decreasing their operating leverage, the decreased risk of insolvency more than makes up for it.

In order to calculate the degree of operating leverage at a given level of sales, we will apply the following formula:

Both companies have the same net income of ?85,000, but company B has a higher degree of operating leverage because its fixed costs are higher than that of company A. If we want to see how operating leverage impacts net operating income, then we can apply the following formula:

Let’s assume that both company A and company B are anticipating a 10% increase in sales. Based on their respective degrees of operating leverage, what will their percentage change in net operating income be?

We will return to Company A and Company B, only this time, the data shows that there has been a 20% decrease in sales. Note that the degree of operating leverage changes for each company. The reduced income resulted in a higher operating leverage, meaning a higher level of risk.

This example also shows why, during periods of decline, companies look for ways to reduce their fixed costs to avoid large percentage reductions in net operating income.

You are the managerial accountant for a large manufacturing firm. The company has sales that are well above its break-even point, but they have historically carried most of their costs as fixed costs. The outlook for the industry you are in is not positive. How could you move more costs away from fixed costs to put the company in a better financial position if the industry does, in fact, take a downturn?

This is reflected in the business plan. Unlike a manufacturer, a grocery store will have hundreds of products at one time with various levels of margin, all of which will be taken into account in the development of their break-even analysis. Review a business plan developed by Viking Grocery Stores in consideration of opening a new site in Springfield, Missouri to see how a grocery store develops a business plan and break-even based upon multiple products.

(Figure)Wallace Industries has total contribution margin of ?58,560 and net income of ?24,400 for the month of April. Wallace expects sales volume to increase by 5% in May. What are the degree of operating leverage and the expected percent change in income for Wallace Industries?

(Figure)Macom Manufacturing has total contribution margin of ?61,250 and net income of ?24,500 for the month of June. Marcus expects sales volume to increase by 10% in July. What are the degree of operating leverage and the expected percent change in income for Macom Manufacturing?

(Figure)If a firm has a contribution margin of ?59,690 and a net income of ?12,700 for the current month, what is their degree of operating leverage?

(Figure)If a firm has a contribution margin of ?78,090 and a net income of ?13,700 for the current month, what is their degree of operating leverage?

(Figure)Explain margin of safety and why it is an important measurement for managers.

Answers will vary. Responses should include an explanation of how margin of safety allows the business to operate at a level where the risk of falling to or below the break-even point is low. There should also be some mention of the usefulness of the margin safety as an “alarm” for companies, such that when sales fall to the margin of safety level, action may be warranted.

(Figure)Define operating leverage and explain its importance to a company and how it relates to risk.

margin of safety
difference between current sales and break-even sales

Principles of Accounting, Volume 2: Managerial Accounting by OSCRiceUniversity is licensed under a Creative Commons Attribution-NonCommercial-ShareAlike 4.0 International License, except where otherwise noted.