43 Explain How Budgets Are Used to Evaluate Goals

As you’ve learned, an advantage of budgeting is evaluating performance. Having a strong understanding of their budgets helps managers keep track of expenses and work toward the company’s goals. Companies need to understand their revenue and expense details to develop budgets as a tool for planning operations and cash flow. Part of understanding revenue and expenses is evaluating the prior year. Did the company earn the expected profit? Could it have earned a higher profit? What expenses or revenues were not on the budget? Critically evaluating the actual results versus the estimated budgetary results can help management plan for the future. Variance analysis helps the manager analyze its results. It does not necessarily find a problem, but it does indicate where a problem may exist. The same is true for favorable variances as well as unfavorable variances. A favorable variance occurs when revenue is higher than budgeted or expenses are lower than budgeted. An unfavorable variance is when revenue is lower than budgeted or expenses are higher than budgeted.

It is easy to understand that an unfavorable variance may be a problem. But that is not always true, as a higher labor rate may mean the company has a higher quality employee who is able to waste less material. Likewise, having a favorable variance indicates that more revenue was earned or less expenses were incurred but further analysis can indicate if costs were cut too far and better materials should have been purchased.

If a company has only a static budget, meaningful comparisons are difficult. Analyzing the sales for Bid Bad Bikes will illustrate whether there was a profit and how net income impacts the company. In the third quarter, Big Bad Bikes sold 1,400 trainers and had third quarter net income of $15,915 as shown in (Figure). 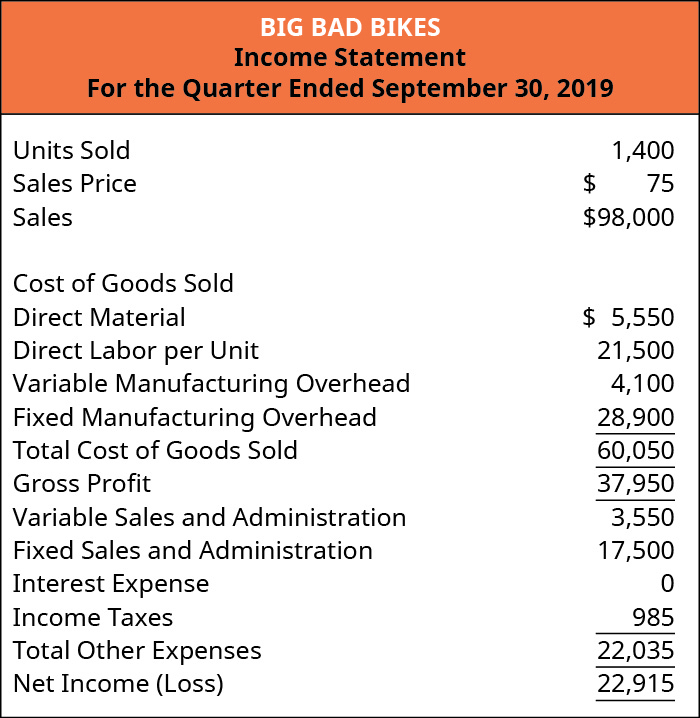 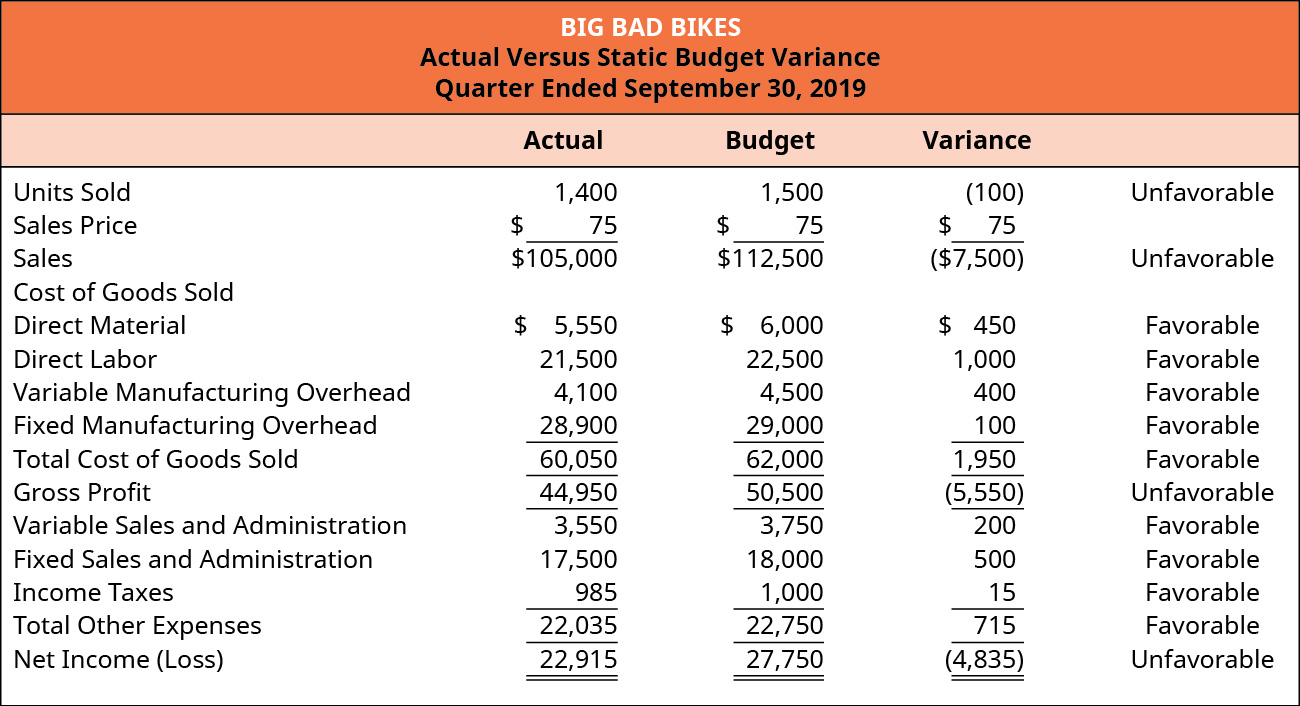 How do those results advise management when evaluating the company’s performance? It is difficult to look at one variance and make a conclusion about the company or its management. However, the variances can help narrow down the areas that need addressing because they differ from the budgeted amount. For example, looking at the variance when using a static budget does not indicate the amount of the variance results because they sold 100 fewer units than budgeted. The variance for the cost of goods sold is favorable, but it should be if production was less than the budget. A static budget does not evaluate whether costs for 1,400 were appropriate for production of those 1,400 units.

Using a static budget to evaluate performance affects the bottom line as well as the individual expenses. The net income for the sale of 1,400 units is less than the budgeted net income for 1,500 units, but it does not indicate whether expenses were appropriate for 1,400 units. If there had been 1,600 units sold, the expenses would be more than the budgeted amount, but sales would be higher. Would it be fair to evaluate a manager’s control over their expenses using a static budget?

Why is ethics training important? An organization that bases a manager’s evaluation and pay on how close to the budget the division performs may inadvertently encourage that manager to act unethically in order to get a pay raise. Many employees manipulate the budget process to enhance their earnings by garnering bonuses based upon questionably ethical behavior and improper financial reporting. Generally, this unethical behavior involves either manipulating the numbers in the budget or modifying the timing of reports to apply income to a different budget period. Kenton Walker and Gary Fleischman studied ethics in budgeting and determined that certain ethics-related structures in a business created a better operational environment.

The study found that the existence of formal ethical codes, ethics training, good management role models, and social pressure to be disclosing within an organization can be a deterrent to budget manipulation by employees. The authors recommended: “Therefore, organizations should carefully cultivate an ethical atmosphere that is sensitive to the pressures employees may feel to game the budget through actions that involve cheating and/or manipulating earnings targets to maximize bonuses.” 1 The study concluded that requiring organizational ethics training that includes role playing helps teach ethical behavior in budgeting and other areas of business. Ethics training never goes out so style. 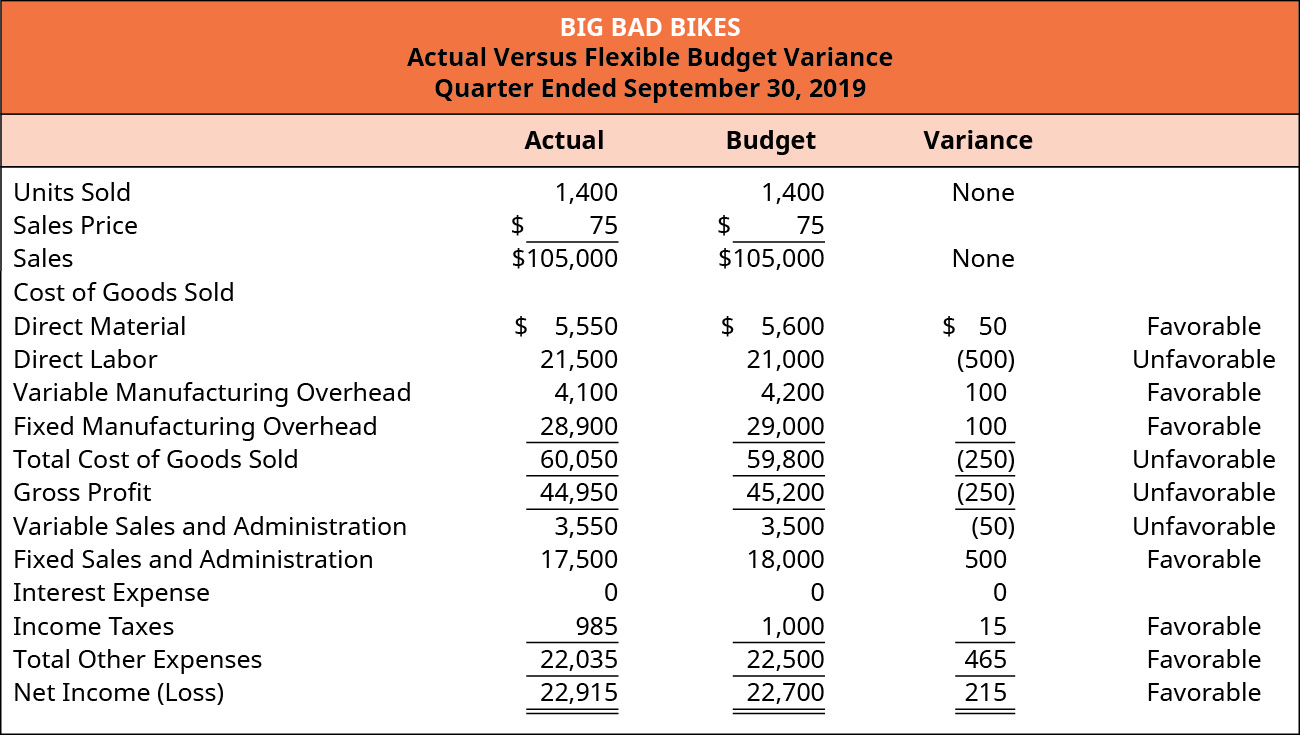 A Budget for a New Business

You are beginning your own business and developed a budget based on modest sales and expense assumptions. The actual results are very close to the budget at the end of the first and second months. During the third month, both cash collected and paid differ significantly from the budget. What could be the cause and what should you do?

Budgeting is only the beginning of the process. Evaluating the results to determine if the financial goals are being met can make the difference in whether an organization or individual meets its goals or not. Forbes recognizes that budgeting is an important personal task that should start early in one’s professional career. This article provides some custom budgeting guidelines for young adults to help.

(Figure)Why does budget planning typically begin with the sales forecast?

(Figure)What steps should be considered if a budget is to be set and later have its results evaluated?

(Figure)The production cost for a waterproof phone case is $7 per unit and fixed costs are $23,000 per month. How much is the favorable or unfavorable variance if 5,500 units were produced for a total of $61,000?

(Figure)The production cost for UV protective sunglasses is $5.50 per unit and fixed costs are $19,400 per month. How much is the favorable or unfavorable variance if 14,000 units were produced for a total of $97,000?

(Figure)Titanium Blades refines titanium for use in all brands of razor blades. It prepared a static budget for the sales of 5,000 units. These variances were observed:

Determine the static budget and use the information to prepare a flexible budget and analysis for the 6,000 units actually sold.

(Figure)Replenish sells shampoo that removes chlorine from hair. It prepared a static budget for the sales of 10,000 units. These variances were observed:

Determine the static budget and use the information to prepare a flexible budget and analysis for the 8,000 units actually sold.

(Figure)If management is being evaluated on their ability to manage a budget, what can they do to increase cash flow?

(Figure)If management is being evaluated on their ability to manage a budget, what can they do to decrease cash outflow?

Principles of Accounting, Volume 2: Managerial Accounting by OSCRiceUniversity is licensed under a Creative Commons Attribution-NonCommercial-ShareAlike 4.0 International License, except where otherwise noted.