The American statesman Benjamin Franklin (1706–1790) once wrote: “No nation was ever ruined by trade.” Many economists would express their attitudes toward international trade in an even more positive manner. The evidence that international trade confers overall benefits on economies is pretty strong. Trade has accompanied economic growth in the United States and around the world. Many of the national economies that have shown the most rapid growth in the last several decades—for example, Japan, South Korea, China, and India—have done so by dramatically orienting their economies toward international trade. There is no modern example of a country that has shut itself off from world trade and yet prospered. To understand the benefits of trade, or why we trade in the first place, we need to understand the concepts of comparative and absolute advantage.

In 1817, David Ricardo, a businessman, economist, and member of the British Parliament, wrote a treatise called On the Principles of Political Economy and Taxation. In this treatise, Ricardo argued that specialization and free trade benefit all trading partners, even those that may be relatively inefficient. To see what he meant, we must be able to distinguish between absolute and comparative advantage.

A country has an absolute advantage over another country in producing a good if it uses fewer resources to produce that good. Absolute advantage can be the result of a country’s natural endowment. For example, extracting oil in Saudi Arabia is pretty much just a matter of “drilling a hole.” Producing oil in other countries can require considerable exploration and costly technologies for drilling and extraction—if they have any oil at all. The United States has some of the richest farmland in the world, making it easier to grow corn and wheat than in many other countries. Guatemala and Colombia have climates especially suited for growing coffee. Chile and Zambia have some of the world’s richest copper mines. As some have argued, “geography is destiny.” Chile will provide copper and Guatemala will produce coffee, and they will trade. When each country has a product others need and it can produce it with fewer resources in one country than in another, then it is easy to imagine all parties benefitting from trade. However, thinking about trade just in terms of geography and absolute advantage is incomplete. Trade really occurs because of comparative advantage.

Recall from the chapter Choice in a World of Scarcity that a country has a comparative advantage when it can produce a good at a lower cost in terms of other goods. The question each country or company should be asking when it trades is this: “What do we give up to produce this good?” It should be no surprise that the concept of comparative advantage is based on this idea of opportunity cost from Choice in a World of Scarcity. For example, if Zambia focuses its resources on producing copper, it cannot use its labor, land and financial resources to produce other goods such as corn. As a result, Zambia gives up the opportunity to produce corn. How do we quantify the cost in terms of other goods? Simplify the problem and assume that Zambia just needs labor to produce copper and corn. The companies that produce either copper or corn tell you that it takes two hours to mine a ton of copper and one hour to harvest a bushel of corn. This means the opportunity cost of producing a ton of copper is two bushels of corn. The next section develops absolute and comparative advantage in greater detail and relates them to trade.

A Numerical Example of Absolute and Comparative Advantage

Consider a hypothetical world with two countries, Saudi Arabia and the United States, and two products, oil and corn. Further assume that consumers in both countries desire both these goods. These goods are homogeneous, meaning that consumers/producers cannot differentiate between corn or oil from either country. There is only one resource available in both countries, labor hours. Saudi Arabia can produce oil with fewer resources, while the United States can produce corn with fewer resources. (Figure) illustrates the advantages of the two countries, expressed in terms of how many hours it takes to produce one unit of each good.

To simplify, let’s say that Saudi Arabia and the United States each have 100 worker hours (see (Figure)). (Figure) illustrates what each country is capable of producing on its own using a production possibility frontier (PPF) graph. Recall from Choice in a World of Scarcity that the production possibilities frontier shows the maximum amount that each country can produce given its limited resources, in this case workers, and its level of technology.

Production Possibilities Frontiers
(a) Saudi Arabia can produce 100 barrels of oil at maximum and zero corn (point A), or 25 bushels of corn and zero oil (point B). It can also produce other combinations of oil and corn if it wants to consume both goods, such as at point C. Here it chooses to produce/consume 60 barrels of oil, leaving 40 work hours that to allocate to produce 10 bushels of corn, using the data in (Figure). (b) If the United States produces only oil, it can produce, at maximum, 50 barrels and zero corn (point A’), or at the other extreme, it can produce a maximum of 100 bushels of corn and no oil (point B’). Other combinations of both oil and corn are possible, such as point C’. All points above the frontiers are impossible to produce given the current level of resources and technology.

In this example, there is symmetry between absolute and comparative advantage. Saudi Arabia needs fewer worker hours to produce oil (absolute advantage, see (Figure)), and also gives up the least in terms of other goods to produce oil (comparative advantage, see (Figure)). Such symmetry is not always the case, as we will show after we have discussed gains from trade fully, but first, read the following Clear It Up feature to make sure you understand why the PPF line in the graphs is straight.

Can a production possibility frontier be straight?

When you first met the production possibility frontier (PPF) in the chapter on Choice in a World of Scarcity we drew it with an outward-bending shape. This shape illustrated that as we transferred inputs from producing one good to another—like from education to health services—there were increasing opportunity costs. In the examples in this chapter, we draw the PPFs as straight lines, which means that opportunity costs are constant. When we transfer a marginal unit of labor away from growing corn and toward producing oil, the decline in the quantity of corn and the increase in the quantity of oil is always the same. In reality this is possible only if the contribution of additional workers to output did not change as the scale of production changed. The linear production possibilities frontier is a less realistic model, but a straight line simplifies calculations. It also illustrates economic themes like absolute and comparative advantage just as clearly.

What are the opportunity costs and gains from trade?

What if we did not have complete specialization, as in (Figure)? Would there still be gains from trade? Consider another example, such as when the United States and Saudi Arabia start at C and C’, respectively, as (Figure) shows. Consider what occurs when trade is allowed and the United States exports 20 bushels of corn to Saudi Arabia in exchange for 20 barrels of oil. 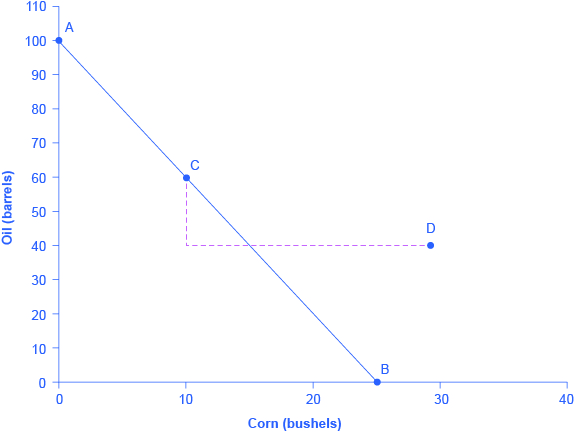 Starting at point C, which shows Saudi oil production of 60, reduce Saudi oil domestic oil consumption by 20, since 20 is exported to the United States and exchanged for 20 units of corn. This enables Saudi to reach point D, where oil consumption is now 40 barrels and corn consumption has increased to 30 (see (Figure)). Notice that even without 100% specialization, if the “trading price,” in this case 20 barrels of oil for 20 bushels of corn, is greater than the country’s opportunity cost, the Saudis will gain from trade. Since the post-trade consumption point D is beyond its production possibility frontier, Saudi Arabia has gained from trade.

True or False: The source of comparative advantage must be natural elements like climate and mineral deposits. Explain.

False. Anything that leads to different levels of productivity between two economies can be a source of comparative advantage. For example, the education of workers, the knowledge base of engineers and scientists in a country, the part of a split-up value chain where they have their specialized learning, economies of scale, and other factors can all determine comparative advantage.

In answering questions like these, it is often helpful to begin by organizing the information in a table, such as in the following table. Notice that, in this case, the productivity of the countries is expressed in terms of how many workers it takes to produce a unit of a product.

In this example, France has an absolute advantage in the production of both sweaters and wine. You can tell because it takes France less labor to produce a unit of the good.

Under what conditions does comparative advantage lead to gains from trade?

What factors does Paul Krugman identify that supported expanding international trade in the 1800s?

Why does the United States not have an absolute advantage in coffee?

Ricardo, David. On the Principles of Political Economy and Taxation. London: John Murray, 1817.

Ricardo, David. “On the Principles of Political Economy and Taxation.” Library of Economics and Liberty. http://www.econlib.org/library/Ricardo/ricP.html.