Demand and Supply in Financial Markets

United States’ households, institutions, and domestic businesses saved almost $1.3 trillion in 2015. Where did that savings go and how was it used? Some of the savings ended up in banks, which in turn loaned the money to individuals or businesses that wanted to borrow money. Some was invested in private companies or loaned to government agencies that wanted to borrow money to raise funds for purposes like building roads or mass transit. Some firms reinvested their savings in their own businesses.

In this section, we will determine how the demand and supply model links those who wish to supply financial capital (i.e., savings) with those who demand financial capital (i.e., borrowing). Those who save money (or make financial investments, which is the same thing), whether individuals or businesses, are on the supply side of the financial market. Those who borrow money are on the demand side of the financial market. For a more detailed treatment of the different kinds of financial investments like bank accounts, stocks and bonds, see the Financial Markets chapter.

Who Demands and Who Supplies in Financial Markets?

Let’s consider the market for borrowing money with credit cards. In 2015, almost 200 million Americans were cardholders. Credit cards allow you to borrow money from the card’s issuer, and pay back the borrowed amount plus interest, although most allow you a period of time in which you can repay the loan without paying interest. A typical credit card interest rate ranges from 12% to 18% per year. In May 2016, Americans had about $943 billion outstanding in credit card debts. About half of U.S. families with credit cards report that they almost always pay the full balance on time, but one-quarter of U.S. families with credit cards say that they “hardly ever” pay off the card in full. In fact, in 2014, 56% of consumers carried an unpaid balance in the last 12 months. Let’s say that, on average, the annual interest rate for credit card borrowing is 15% per year. Thus, Americans pay tens of billions of dollars every year in interest on their credit cards—plus basic fees for the credit card or fees for late payments. 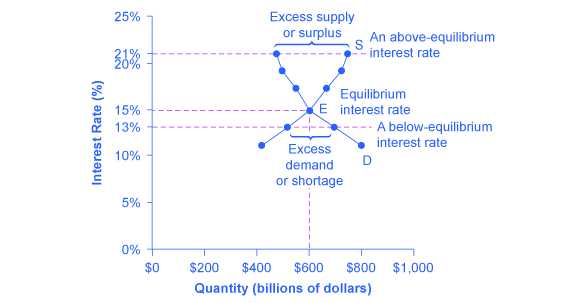 The FRED database publishes some two dozen measures of interest rates, including interest rates on credit cards, automobile loans, personal loans, mortgage loans, and more. You can find these at the FRED website.

Shifts in Demand and Supply in Financial Markets

Those who supply financial capital face two broad decisions: how much to save, and how to divide up their savings among different forms of financial investments. We will discuss each of these in turn.

Participants in financial markets must decide when they prefer to consume goods: now or in the future. Economists call this intertemporal decision making because it involves decisions across time. Unlike a decision about what to buy from the grocery store, people make investment or savings decisions across a period of time, sometimes a long period.

Most workers save for retirement because their income in the present is greater than their needs, while the opposite will be true once they retire. Thus, they save today and supply financial markets. If their income increases, they save more. If their perceived situation in the future changes, they change the amount of their saving. For example, there is some evidence that Social Security, the program that workers pay into in order to qualify for government checks after retirement, has tended to reduce the quantity of financial capital that workers save. If this is true, Social Security has shifted the supply of financial capital at any interest rate to the left.

By contrast, many college students need money today when their income is low (or nonexistent) to pay their college expenses. As a result, they borrow today and demand from financial markets. Once they graduate and become employed, they will pay back the loans. Individuals borrow money to purchase homes or cars. A business seeks financial investment so that it has the funds to build a factory or invest in a research and development project that will not pay off for five years, ten years, or even more. Thus, when consumers and businesses have greater confidence that they will be able to repay in the future, the quantity demanded of financial capital at any given interest rate will shift to the right.

For example, in the technology boom of the late 1990s, many businesses became extremely confident that investments in new technology would have a high rate of return, and their demand for financial capital shifted to the right. Conversely, during the 2008 and 2009 Great Recession, their demand for financial capital at any given interest rate shifted to the left.

The United States as a Global Borrower

The Effect of Growing U.S. Debt

Imagine that foreign investors viewed the U.S. economy as a less desirable place to put their money because of fears about the growth of the U.S. public debt. Using the four-step process for analyzing how changes in supply and demand affect equilibrium outcomes, how would increased U.S. public debt affect the equilibrium price and quantity for capital in U.S. financial markets?

Step 1. Draw a diagram showing demand and supply for financial capital that represents the original scenario in which foreign investors are pouring money into the U.S. economy. (Figure) shows a demand curve, D, and a supply curve, S, where the supply of capital includes the funds arriving from foreign investors. The original equilibrium E0 occurs at interest rate R0 and quantity of financial investment Q0.

The United States as a Global Borrower Before U.S. Debt Uncertainty
The graph shows the demand for financial capital from and supply of financial capital into the U.S. financial markets by the foreign sector before the increase in uncertainty regarding U.S. public debt. The original equilibrium (E0) occurs at an equilibrium rate of return (R0) and the equilibrium quantity is at Q0. 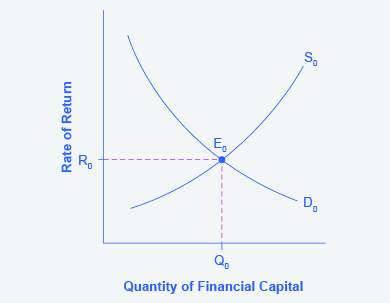 Step 3. Will supply increase or decrease? When the enthusiasm of foreign investors’ for investing their money in the U.S. economy diminishes, the supply of financial capital shifts to the left. (Figure) shows the supply curve shift from S0 to S1.

The United States as a Global Borrower Before and After U.S. Debt Uncertainty
The graph shows the demand for financial capital and supply of financial capital into the U.S. financial markets by the foreign sector before and after the increase in uncertainty regarding U.S. public debt. The original equilibrium (E0) occurs at an equilibrium rate of return (R0) and the equilibrium quantity is at Q0. 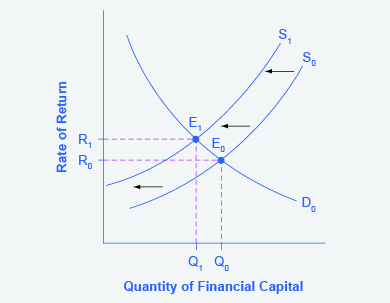 Step 4. Thus, foreign investors’ diminished enthusiasm leads to a new equilibrium, E1, which occurs at the higher interest rate, R1, and the lower quantity of financial investment, Q1. In short, U.S. borrowers will have to pay more interest on their borrowing.

The economy has experienced an enormous inflow of foreign capital. According to the U.S. Bureau of Economic Analysis, by the third quarter of 2015, U.S. investors had accumulated $23.3 trillion of foreign assets, but foreign investors owned a total of $30.6 trillion of U.S. assets. If foreign investors were to pull their money out of the U.S. economy and invest elsewhere in the world, the result could be a significantly lower quantity of financial investment in the United States, available only at a higher interest rate. This reduced inflow of foreign financial investment could impose hardship on U.S. consumers and firms interested in borrowing.

In a modern, developed economy, financial capital often moves invisibly through electronic transfers between one bank account and another. Yet we can analyze these flows of funds with the same tools of demand and supply as markets for goods or labor.

As we noted earlier, about 200 million Americans own credit cards, and their interest payments and fees total tens of billions of dollars each year. It is little wonder that political pressures sometimes arise for setting limits on the interest rates or fees that credit card companies charge. The firms that issue credit cards, including banks, oil companies, phone companies, and retail stores, respond that the higher interest rates are necessary to cover the losses created by those who borrow on their credit cards and who do not repay on time or at all. These companies also point out that cardholders can avoid paying interest if they pay their bills on time. 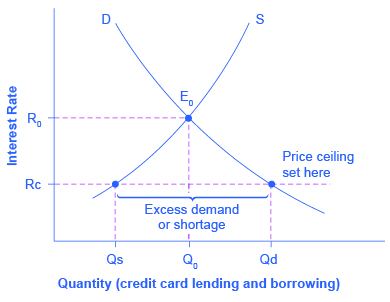 Many states do have usury laws, which impose an upper limit on the interest rate that lenders can charge. However, in many cases these upper limits are well above the market interest rate. For example, if the interest rate is not allowed to rise above 30% per year, it can still fluctuate below that level according to market forces. A price ceiling that is set at a relatively high level is nonbinding, and it will have no practical effect unless the equilibrium price soars high enough to exceed the price ceiling.

In the demand and supply analysis of financial markets, the “price” is the rate of return or the interest rate received. We measure the quantity by the money that flows from those who supply financial capital to those who demand it.

Two factors can shift the supply of financial capital to a certain investment: if people want to alter their existing levels of consumption, and if the riskiness or return on one investment changes relative to other investments. Factors that can shift demand for capital include business confidence and consumer confidence in the future—since financial investments received in the present are typically repaid in the future.

Which of the following changes in the financial market will lead to a decline in interest rates:

b and c will lead to a fall in interest rates. At a lower demand, lenders will not be able to charge as much, and with more available lenders, competition for borrowers will drive rates down.

Which of the following changes in the financial market will lead to an increase in the quantity of loans made and received:

How do economists define equilibrium in financial markets?

What would be a sign of a shortage in financial markets?

Would usury laws help or hinder resolution of a shortage in financial markets?

Suppose the U.S. economy began to grow more rapidly than other countries in the world. What would be the likely impact on U.S. financial markets as part of the global economy?

If the government imposed a federal interest rate ceiling of 20% on all loans, who would gain and who would lose?

Predict how each of the following economic changes will affect the equilibrium price and quantity in the financial market for home loans. Sketch a demand and supply diagram to support your answers.

interest rate
the “price” of borrowing in the financial market; a rate of return on an investment