Comparisons of high and low incomes raise two different issues: economic inequality and poverty. Poverty is measured by the number of people who fall below a certain level of income—called the poverty line—that defines the income one needs for a basic standard of living. Income inequality compares the share of the total income (or wealth) in society that different groups receive. For example, compare the share of income that the top 10% receive to the share of income that the bottom 10% receive.

In the United States, the official definition of the poverty line traces back to a single person: Mollie Orshansky. In 1963, Orshansky, who was working for the Social Security Administration, published an article called “Children of the Poor” in a highly useful and dry-as-dust publication called the Social Security Bulletin. Orshansky’s idea was to define a poverty line based on the cost of a healthy diet.

Her previous job had been at the U.S. Department of Agriculture, where she had worked in an agency called the Bureau of Home Economics and Human Nutrition. One task of this bureau had been to calculate how much it would cost to feed a nutritionally adequate diet to a family. Orshansky found that the average family spent one-third of its income on food. She then proposed that the poverty line be the amount one requires to buy a nutritionally adequate diet, given the size of the family, multiplied by three.

The current U.S. poverty line is essentially the same as the Orshansky poverty line, although the government adjusts the dollar amounts to represent the same buying power over time. The U.S. poverty line in 2015 ranged from $11,790 for a single individual to $25,240 for a household of four people.

Visit this website for more information on U.S. poverty. 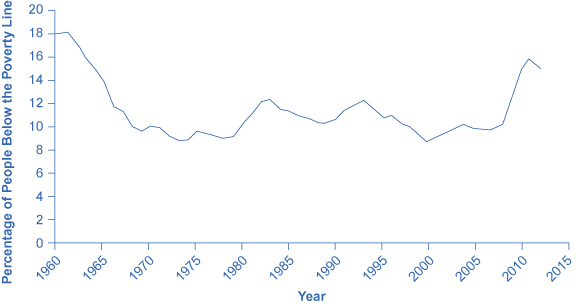 The concept of a poverty line raises many tricky questions. In a vast country like the United States, should there be a national poverty line? After all, according to the Federal Register, the median household income for a family of four was $102,552 in New Jersey and $57,132 in Mississippi in 2013, and prices of some basic goods like housing are quite different between states. The poverty line is based on cash income, which means it does not account for government programs that provide assistance to the poor in a non-cash form, like Medicaid (health care for low-income individuals and families) and food aid. Also, low-income families can qualify for federal housing assistance. (We will discuss these and other government aid programs in detail later in this chapter.)

Should the government adjust the poverty line to account for the value of such programs? Many economists and policymakers wonder whether we should rethink the concept of what poverty means in the twenty-first century. The following Clear It Up feature explains the poverty lines set by the World Bank for low-income countries around the world.

How do economists measure poverty in low-income countries?

The World Bank sets two poverty lines for low-income countries around the world. One poverty line is set at an income of $1.25/day per person. The other is at $2/day. By comparison, the U.S. 2015 poverty line of $20,090 annually for a family of three works out to $18.35 per person per day.

Clearly, many people around the world are far poorer than Americans, as (Figure) shows. China and India both have more than a billion people; Nigeria is the most populous country in Africa; and Egypt is the most populous country in the Middle East. In all four of those countries, in the mid-2000s, a substantial share of the population subsisted on less than $2/day. About half the world lives on less than $2.50 a day, and 80 percent of the world lives on less than $10 per day. (Of course, the cost of food, clothing, and shelter in those countries can be very different from those costs in the United States, so the $2 and $2.50 figures may mean greater purchasing power than they would in the United States.)

Any poverty line will be somewhat arbitrary, and it is useful to have a poverty line whose basic definition does not change much over time. If Congress voted every few years to redefine poverty, then it would be difficult to compare rates over time. After all, would a lower poverty rate change the definition, or that people were actually better off? Government statisticians at the U.S. Census Bureau have ongoing research programs to address questions like these.

Wages are influenced by Supply and demand in labor markets influence wages. This can lead to very low incomes for some people and very high incomes for others. Poverty and income inequality are not the same thing. Poverty applies to the condition of people who cannot afford the necessities of life. Income inequality refers to the disparity between those with higher and lower incomes. The poverty rate is what percentage of the population lives below the poverty line, which the amount of income that it takes to purchase the necessities of life determines. Choosing a poverty line will always be somewhat controversial.

Describe how each of these changes is likely to affect poverty and inequality:

How is the poverty rate calculated?

What is the poverty line?

What is the difference between poverty and income inequality?

What goods and services would you include in an estimate of the basic necessities for a family of four?

If a family of three earned $20,000, would they be able to make ends meet given the official poverty threshold?

In country A, the population is 300 million and 50 million people are living below the poverty line. What is the poverty rate?

poverty rate
percentage of the population living below the poverty line