This section presents an overview of government spending in the United States.

Federal spending in nominal dollars (that is, dollars not adjusted for inflation) has grown by a multiple of more than 38 over the last four decades, from $93.4 billion in 1960 to $3.9 trillion in 2014. Comparing spending over time in nominal dollars is misleading because it does not take into account inflation or growth in population and the real economy. A more useful method of comparison is to examine government spending as a percent of GDP over time.

The top line in (Figure) shows the federal spending level since 1960, expressed as a share of GDP. Despite a widespread sense among many Americans that the federal government has been growing steadily larger, the graph shows that federal spending has hovered in a range from 18% to 22% of GDP most of the time since 1960. The other lines in (Figure) show the major federal spending categories: national defense, Social Security, health programs, and interest payments. From the graph, we see that national defense spending as a share of GDP has generally declined since the 1960s, although there were some upward bumps in the 1980s buildup under President Ronald Reagan and in the aftermath of the terrorist attacks on September 11, 2001. In contrast, Social Security and healthcare have grown steadily as a percent of GDP. Healthcare expenditures include both payments for senior citizens (Medicare), and payments for low-income Americans (Medicaid). State governments also partially fund Medicaid. Interest payments are the final main category of government spending in Figure 30.2.

Federal Spending, 1960–2014
Since 1960, total federal spending has ranged from about 18% to 22% of GDP, although it climbed above that level in 2009, but quickly dropped back down to that level by 2013. The share that the government has spent on national defense has generally declined, while the share it has spent on Social Security and on healthcare expenses (mainly Medicare and Medicaid) has increased. (Source: Economic Report of the President, Tables B-2 and B-22, http://www.gpo.gov/fdsys/pkg/ERP-2014/content-detail.html) 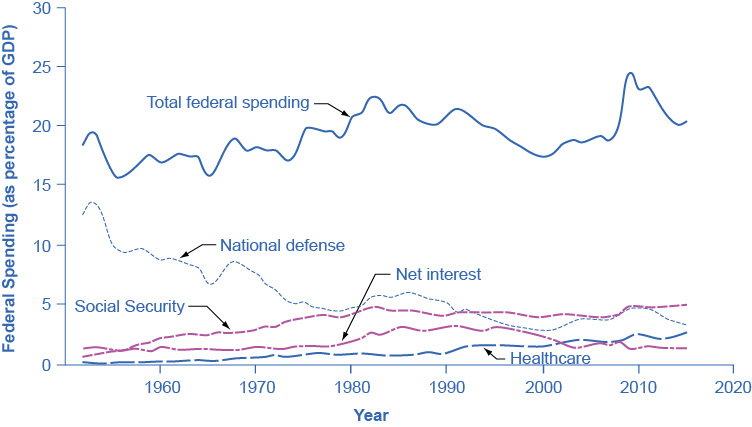 Each year, the government borrows funds from U.S. citizens and foreigners to cover its budget deficits. It does this by selling securities (Treasury bonds, notes, and bills)—in essence borrowing from the public and promising to repay with interest in the future. From 1961 to 1997, the U.S. government has run budget deficits, and thus borrowed funds, in almost every year. It had budget surpluses from 1998 to 2001, and then returned to deficits.

We investigate the government borrowing and debt patterns in more detail later in this chapter, but first we need to clarify the difference between the deficit and the debt. The deficit is not the debt. The difference between the deficit and the debt lies in the time frame. The government deficit (or surplus) refers to what happens with the federal government budget each year. The government debt is accumulated over time. It is the sum of all past deficits and surpluses. If you borrow $10,000 per year for each of the four years of college, you might say that your annual deficit was $10,000, but your accumulated debt over the four years is $40,000.

These four categories—national defense, Social Security, healthcare, and interest payments—account for roughly 73% of all federal spending, as (Figure) shows. The remaining 27% wedge of the pie chart covers all other categories of federal government spending: international affairs; science and technology; natural resources and the environment; transportation; housing; education; income support for the poor; community and regional development; law enforcement and the judicial system; and the administrative costs of running the government.

Slices of Federal Spending, 2014
About 73% of government spending goes to four major areas: national defense, Social Security, healthcare, and interest payments on past borrowing. This leaves about 29% of federal spending for all other functions of the U.S. government. (Source: https://www.whitehouse.gov/omb/budget/Historicals/)

Although federal government spending often gets most of the media attention, state and local government spending is also substantial—at about $3.1 trillion in 2014. (Figure) shows that state and local government spending has increased during the last four decades from around 8% to around 14% today. The single biggest item is education, which accounts for about one-third of the total. The rest covers programs like highways, libraries, hospitals and healthcare, parks, and police and fire protection. Unlike the federal government, all states (except Vermont) have balanced budget laws, which means any gaps between revenues and spending must be closed by higher taxes, lower spending, drawing down their previous savings, or some combination of all of these.

State and Local Spending, 1960–2013
Spending by state and local government increased from about 10% of GDP in the early 1960s to 14–16% by the mid-1970s. It has remained at roughly that level since. The single biggest spending item is education, including both K–12 spending and support for public colleges and universities, which has been about 4–5% of GDP in recent decades. Source: (Source: Bureau of Economic Analysis.) 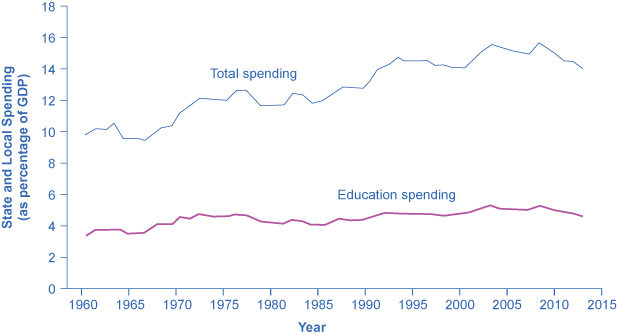 U.S. presidential candidates often run for office pledging to improve the public schools or to get tough on crime. However, in the U.S. government system, these tasks are primarily state and local government responsibilities. In fiscal year 2014 state and local governments spent about $840 billion per year on education (including K–12 and college and university education), compared to only $100 billion by the federal government, according to usgovernmentspending.com. In other words, about 90 cents of every dollar spent on education happens at the state and local level. A politician who really wants hands-on responsibility for reforming education or reducing crime might do better to run for mayor of a large city or for state governor rather than for president of the United States.

When governments run budget deficits, how do they make up the differences between tax revenue and spending?

When governments run budget surpluses, what is done with the extra funds?

The funds can be used to pay down the national debt or else be refunded to the taxpayers.

Give some examples of changes in federal spending and taxes by the government that would be fiscal policy and some that would not.

Have the spending and taxes of the U.S. federal government generally had an upward or a downward trend in the last few decades?

What are the main categories of U.S. federal government spending?

What is the difference between a budget deficit, a balanced budget, and a budget surplus?

Have spending and taxes by state and local governments in the United States had a generally upward or downward trend in the last few decades?

Why is government spending typically measured as a percentage of GDP rather than in nominal dollars?

Why are expenditures such as crime prevention and education typically done at the state and local level rather than at the federal level?

balanced budget
when government spending and taxes are equal