Most Americans would be outraged if a law prevented them from moving to another city or another state. However, when the conversation turns to crossing national borders and are about other people arriving in the United States, laws preventing such movement often seem more reasonable. Some of the tensions over immigration stem from worries over how it might affect a country’s culture, including differences in language, and patterns of family, authority, or gender relationships. Economics does not have much to say about such cultural issues. Some of the worries about immigration do, however, have to do with its effects on wages and income levels, and how it affects government taxes and spending. On those topics, economists have insights and research to offer.

Immigration Since 1900
The number of immigrants in each decade declined between 1900 and the 1940s, rose sharply through 2009 and started to decline from 2010 to the present. (Source: U.S. Department of Homeland Security, Yearbook of Immigration Statistics: 2011, Table 1) 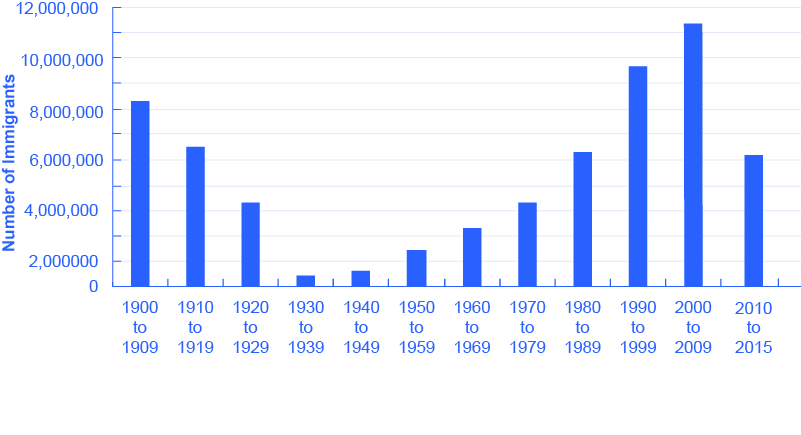 From where have the immigrants come? Immigrants from Europe were more than 90% of the total in the first decade of the twentieth century, but less than 20% of the total by the end of the century. By the 2000s, about half of U.S. immigration came from the rest of the Americas, especially Mexico, and about a quarter came from various countries in Asia.

To understand the economic consequences of immigration, consider the following scenario. Imagine that the immigrants entering the United States matched the existing U.S. population in age range, education, skill levels, family size, and occupations. How would immigration of this type affect the rest of the U.S. economy? Immigrants themselves would be much better off, because their standard of living would be higher in the United States. Immigrants would contribute to both increased production and increased consumption. Given enough time for adjustment, the range of jobs performed, income earned, taxes paid, and public services needed would not be much affected by this kind of immigration. It would be as if the population simply increased a little.

Now, consider the reality of recent immigration to the United States. Immigrants are not identical to the rest of the U.S. population. About one-third of immigrants over the age of 25 lack a high school diploma. As a result, many of the recent immigrants end up in jobs like restaurant and hotel work, lawn care, and janitorial work. This kind of immigration represents a shift to the right in the supply of unskilled labor for a number of jobs, which will lead to lower wages for these jobs. The middle- and upper-income households that purchase the services of these unskilled workers will benefit from these lower wages. However, low-skilled U.S. workers who must compete with low-skilled immigrants for jobs will tend to suffer from immigration.

The difficult policy questions about immigration are not so much about the overall gains to the rest of the economy, which seem to be real but small in the context of the U.S. economy, as they are about the disruptive effects of immigration in specific labor markets. One disruptive effect, as we noted, is that immigration weighted toward low-skill workers tends to reduce wages for domestic low-skill workers. A study by Michael S. Clune found that for each 10% rise in the number of employed immigrants with no more than a high school diploma in the labor market, high school students reduced their annual number of hours worked by 3%. The effects on wages of low-skill workers are not large—perhaps in the range of decline of about 1%. These effects are likely kept low, in part, because of the legal floor of federal and state minimum wage laws. In addition, immigrants are also thought to contribute to increased demand for local goods and services which can stimulate the local low skilled labor market. It is also possible that employers, in the face of abundant low-skill workers may choose production processes which are more labor intensive than otherwise would have been. These various factors would explain the small negative wage effect that the native low-skill workers observed as a result of immigration.

Another potential disruptive effect is the impact on state and local government budgets. Many of the costs imposed by immigrants are costs that arise in state-run programs, like the cost of public schooling and of welfare benefits. However, many of the taxes that immigrants pay are federal taxes like income taxes and Social Security taxes. Many immigrants do not own property (such as homes and cars), so they do not pay property taxes, which are one of the main sources of state and local tax revenue. However, they do pay sales taxes, which are state and local, and the landlords of property they rent pay property taxes. According to the nonprofit Rand Corporation, the effects of immigration on taxes are generally positive at the federal level, but they are negative at the state and local levels in places where there are many low-skilled immigrants.

Visit this website to obtain more context regarding immigration.

The Congressional Jordan Commission of the 1990s proposed reducing overall levels of immigration and refocusing U.S. immigration policy to give priority to immigrants with higher skill levels. In the labor market, focusing on high-skilled immigrants would help prevent any negative effects on low-skilled workers’ wages. For government budgets, higher-skilled workers find jobs more quickly, earn higher wages, and pay more in taxes. Several other immigration-friendly countries, notably Canada and Australia, have immigration systems where those with high levels of education or job skills have a much better chance of obtaining permission to immigrate. For the United States, high tech companies regularly ask for a more lenient immigration policy to admit a greater quantity of highly skilled workers under the H1B visa program.

The Obama Administration proposed the so-called “DREAM Act” legislation, which would have offered a path to citizenship for illegal immigrants brought to the United States before the age of 16. Despite bipartisan support, the legislation failed to pass at the federal level. However, some state legislatures, such as California, have passed their own Dream Acts.

Between its plans for a border wall, increased deportation of undocumented immigrants, and even reductions in the number of highly skilled legal H1B immigrants, the Trump Administration has a much less positive approach to immigration. Most economists, whether conservative or liberal, believe that while immigration harms some domestic workers, the benefits to the nation exceed the costs. However, given the Trump Administration’s opposition, any significant immigration reform is likely on hold.

The Increasing Value of a College Degree

The cost of college has increased dramatically in recent decades, causing many college students to take student loans to afford it. Despite this, the value of a college degree has never been higher. How can we explain this?

While a college degree holder’s wages have increased somewhat, the major reason for the increase in value of a bachelor’s degree has been the plummeting value of a high school diploma. In the twenty-first century, the majority of jobs require at least some post-secondary education. This includes manufacturing jobs that in the past would have afforded workers a middle class income with only a high school diploma. Those jobs are increasingly scarce. This phenomenon has also no doubt contributed to the increasing inequality of income that we observe in the U.S. today. We will discuss that topic next, in Chapter 15.

The recent level of U.S. immigration is at a historically high level if we measure it in absolute numbers, but not if we measure it as a share of population. The overall gains to the U.S. economy from immigration are real but relatively small. However, immigration also causes effects like slightly lower wages for low-skill workers and budget problems
for certain state and local governments.

If immigration is reduced, what is the impact on the wage for low-skilled labor? Explain.

Have levels of immigration to the United States been relatively high or low in recent years? Explain.

How would you expect immigration by primarily low-skill workers to affect American low-skilled workers?

If the United States allows a greater quantity of
highly skilled workers, what will be the impact on the
average wages of highly skilled employees?

If all countries eliminated all barriers to immigration, would global economic growth increase? Why or why not?