Absolute and comparative advantages explain a great deal about global trading patterns. For example, they help to explain the patterns that we noted at the start of this chapter, like why you may be eating fresh fruit from Chile or Mexico, or why lower productivity regions like Africa and Latin America are able to sell a substantial proportion of their exports to higher productivity regions like the European Union and North America. Comparative advantage, however, at least at first glance, does not seem especially well-suited to explain other common patterns of international trade.

The Prevalence of Intra-industry Trade between Similar Economies

The theory of comparative advantage suggests that trade should happen between economies with large differences in opportunity costs of production. Roughly half of all world trade involves shipping goods between the fairly similar high-income economies of the United States, Canada, the European Union, Japan, Mexico, and China (see (Figure)).

Moreover, the theory of comparative advantage suggests that each economy should specialize to a degree in certain products, and then exchange those products. A high proportion of trade, however, is intra-industry trade—that is, trade of goods within the same industry from one country to another. For example, the United States produces and exports autos and imports autos. (Figure) shows some of the largest categories of U.S. exports and imports. In all of these categories, the United States is both a substantial exporter and a substantial importer of goods from the same industry. In 2014, according to the Bureau of Economic Analysis, the United States exported $146 billion worth of autos, and imported $327 billion worth of autos. About 60% of U.S. trade and 60% of European trade is intra-industry trade.

Why do similar high-income economies engage in intra-industry trade? What can be the economic benefit of having workers of fairly similar skills making cars, computers, machinery and other products which are then shipped across the oceans to and from the United States, the European Union, and Japan? There are two reasons: (1) The division of labor leads to learning, innovation, and unique skills; and (2) economies of scale.

Gains from Specialization and Learning

Consider the category of machinery, where the U.S. economy has considerable intra-industry trade. Machinery comes in many varieties, so the United States may be exporting machinery for manufacturing with wood, but importing machinery for photographic processing. The underlying reason why a country like the United States, Japan, or Germany produces one kind of machinery rather than another is usually not related to U.S., German, or Japanese firms and workers having generally higher or lower skills. It is just that, in working on very specific and particular products, firms in certain countries develop unique and different skills.

Specialization in the world economy can be very finely split. In fact, recent years have seen a trend in international trade, which economists call splitting up the value chain. The value chain describes how a good is produced in stages. As indicated in the beginning of the chapter, producing the iPhone involves designing and engineering the phone in the United States, supplying parts from Korea, assembling the parts in China, and advertising and marketing in the United States. Thanks in large part to improvements in communication technology, sharing information, and transportation, it has become easier to split up the value chain. Instead of production in a single large factory, different firms operating in various places and even different countries can divide the value chain. Because firms split up the value chain, international trade often does not involve nations trading whole finished products like automobiles or refrigerators. Instead, it involves shipping more specialized goods like, say, automobile dashboards or the shelving that fits inside refrigerators. Intra-industry trade between similar countries produces economic gains because it allows workers and firms to learn and innovate on particular products—and often to focus on very particular parts of the value chain.

Visit this website for some interesting information about the assembly of the iPhone.

In this example, a small or medium plant, like S or M, will not be able to compete in the market with a large or a very large plant like L or V, because the firm that operates L or V will be able to produce and sell its output at a lower price. In this example, economies of scale operate up to point L, but beyond point L to V, the additional scale of production does not continue to reduce average costs of production. 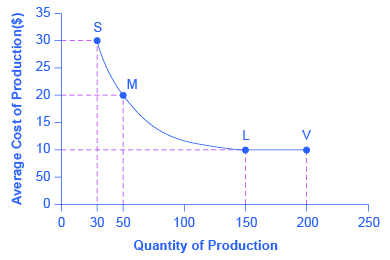 The concept of economies of scale becomes especially relevant to international trade when it enables one or two large producers to supply the entire country. For example, a single large automobile factory could probably supply all the cars consumers purchase in a smaller economy like the United Kingdom or Belgium in a given year. However, if a country has only one or two large factories producing cars, and no international trade, then consumers in that country would have relatively little choice between kinds of cars (other than the color of the paint and other nonessential options). Little or no competition will exist between different car manufacturers.

International trade provides a way to combine the lower average production costs that come from economies of scale and still have competition and variety for consumers. Large automobile factories in different countries can make and sell their products around the world. If General Motors, Ford, and Chrysler were the only players in the U.S. automobile market, the level of competition and consumer choice would be considerably lower than when U.S. carmakers must face competition from Toyota, Honda, Suzuki, Fiat, Mitsubishi, Nissan, Volkswagen, Kia, Hyundai, BMW, Subaru, and others. Greater competition brings with it innovation and responsiveness to what consumers want. America’s car producers make far better cars now than they did several decades ago, and much of the reason is competitive pressure, especially from East Asian and European carmakers.

The sources of gains from intra-industry trade between similar economies—namely, the learning that comes from a high degree of specialization and splitting up the value chain and from economies of scale—do not contradict the earlier theory of comparative advantage. Instead, they help to broaden the concept.

In intra-industry trade, climate or geography do not determine the level of worker productivity. Even the general level of education or skill does not determine it. Instead, how firms engage in specific learning about specialized products, including taking advantage of economies of scale determine the level of worker productivity. In this vision, comparative advantage can be dynamic—that is, it can evolve and change over time as one develops new skills and as manufacturers split the value chain in new ways. This line of thinking also suggests that countries are not destined to have the same comparative advantage forever, but must instead be flexible in response to ongoing changes in comparative advantage.

A large share of global trade happens between high-income economies that are quite similar in having well-educated workers and advanced technology. These countries practice intra-industry trade, in which they import and export the same products at the same time, like cars, machinery, and computers. In the case of intra-industry trade between economies with similar income levels, the gains from trade come from specialized learning in very particular tasks and from economies of scale. Splitting up the value chain means that several stages of producing a good take place in different countries around the world.

How can there be any economic gains for a country from both importing and exporting the same good, like cars?

There are a number of possible advantages of intra-industry trade. Both nations can take advantage of extreme specialization and learning in certain kinds of cars with certain traits, like gas-efficient cars, luxury cars, sport-utility vehicles, higher- and lower-quality cars, and so on. Moreover, nations can take advantage of economies of scale, so that large companies will compete against each other across international borders, providing the benefits of competition and variety to customers. This same argument applies to trade between U.S. states, where people often buy products made by people of other states, even though a similar product is made within the boundaries of their own state. All states—and all countries—can benefit from this kind of competition and trade.

(Figure) shows how the average costs of production for semiconductors (the “chips” in computer memories) change as the quantity of semiconductors built at that factory increases.

What is intra-industry trade?

What are the two main sources of economic gains from intra-industry trade?

What is splitting up the value chain?

Does intra-industry trade contradict the theory of comparative advantage?

Do consumers benefit from intra-industry trade?

Why might intra-industry trade seem surprising from the point of view of comparative advantage?

Consider two countries: South Korea and Taiwan. Taiwan can produce one million mobile phones per day at the cost of $10 per phone and South Korea can produce 50 million mobile phones at $5 per phone. Assume these phones are the same type and quality and there is only one price. What is the minimum price at which both countries will engage in trade?

intra-industry trade
international trade of goods within the same industry

value chain
how a good is produced in stages