View from Voyager I
Launched by NASA on September 5, 1977, Voyager 1’s primary mission was to provide detailed images of Jupiter, Saturn, and their moons. It took this photograph of Jupiter on its journey. In August of 2012, Voyager I entered interstellar space—the first human-made object to do so—and it is expected to send data and images back to earth until 2025. Such a technological feat entails many economic principles. (Credit: modification of work by NASA/JPL) 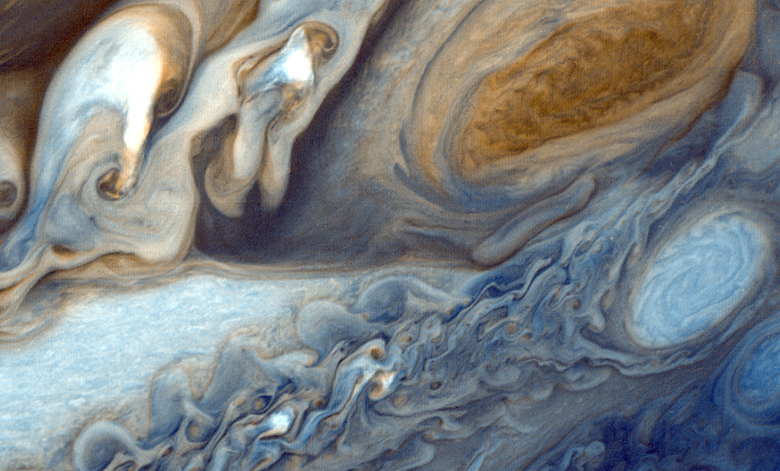 The Benefits of Voyager I Endure

The rapid growth of technology has increased our ability to access and process data, to navigate through a busy city, and to communicate with friends on the other side of the globe. The research and development efforts of citizens, scientists, firms, universities, and governments have truly revolutionized the modern economy. To get a sense of how far we have come in a short period of time, let’s compare one of humankind’s greatest achievements to the smartphone most of us have in our coat pocket.

In 1977 the United States launched Voyager I, a spacecraft originally intended to reach Jupiter and Saturn, to send back photographs and other cosmic measurements. Voyager I, however, kept going, and going—past Jupiter and Saturn—right out of our solar system. At the time of its launch, Voyager had some of the most sophisticated computing processing power NASA could engineer (8,000 instructions per second), but today, we Earthlings use handheld devices that can process 14 billion instructions per second.

Still, the technology of today is a spillover product of the incredible feats NASA accomplished forty years ago. NASA research, for instance, is responsible for the kidney dialysis and mammogram machines that we use today. Research in new technologies not only produces private benefits to the investing firm, or in this case to NASA, but it also creates benefits for the broader society. In this way, new knowledge often becomes what economists refer to as a public good. This leads us to the topic of this chapter—technology, positive externalities, public goods, and the role of government in encouraging innovation and the social benefits that it provides.

Can you imagine a world in which you did not own a cellular phone or use Wikipedia? New technology changes how people live and work and what they buy. Technology includes the invention of new products, new ways of producing goods and services, and even new ways of managing a company more efficiently. Research and development of technology is the difference between horses and automobiles, between candles and electric lights, between fetching water in buckets and indoor plumbing, and between infection and good health from antibiotics.

In December 2009, ABC News compiled a list of some of the technological breakthroughs that have revolutionized consumer products in the past 10 years:

With all new technologies, however, there are new challenges. This chapter deals with some of these issues: Will private companies be willing to invest in new technology? In what ways does new technology have positive externalities? What motivates inventors? Does government have a role to play in encouraging research and technology? Are there certain types of goods that markets fail to provide efficiently, and that only government can produce? What happens when consumption or production of a product creates positive externalities? Why is it unsurprising when we overuse a common resource, like marine fisheries?