Economists believe there are a small number of fundamental principles that explain how economic agents respond in different situations. Two of these principles, which we have already introduced, are the laws of demand and supply.

Governments can pass laws affecting market outcomes, but no law can negate these economic principles. Rather, the principles will become apparent in sometimes unexpected ways, which may undermine the intent of the government policy. This is one of the major conclusions of this section.

Controversy sometimes surrounds the prices and quantities established by demand and supply, especially for products that are considered necessities. In some cases, discontent over prices turns into public pressure on politicians, who may then pass legislation to prevent a certain price from climbing “too high” or falling “too low.”

The demand and supply model shows how people and firms will react to the incentives that these laws provide to control prices, in ways that will often lead to undesirable consequences. Alternative policy tools can often achieve the desired goals of price control laws, while avoiding at least some of their costs and tradeoffs.

Laws that government enact to regulate prices are called price controls. Price controls come in two flavors. A price ceiling keeps a price from rising above a certain level (the “ceiling”), while a price floor keeps a price from falling below a given level (the “floor”). This section uses the demand and supply framework to analyze price ceilings. The next section discusses price floors.

In many markets for goods and services, demanders outnumber suppliers. Consumers, who are also potential voters, sometimes unite behind a political proposal to hold down a certain price. In some cities, such as Albany, renters have pressed political leaders to pass rent control laws, a price ceiling that usually works by stating that landlords can raise rents by only a certain maximum percentage each year. Some of the best examples of rent control occur in urban areas such as New York, Washington D.C., or San Francisco.

Rent control becomes a politically hot topic when rents begin to rise rapidly. Everyone needs an affordable place to live. Perhaps a change in tastes makes a certain suburb or town a more popular place to live. Perhaps locally-based businesses expand, bringing higher incomes and more people into the area. Such changes can cause a change in the demand for rental housing, as (Figure) illustrates. The original equilibrium (E0) lies at the intersection of supply curve S0 and demand curve D0, corresponding to an equilibrium price of $500 and an equilibrium quantity of 15,000 units of rental housing. The effect of greater income or a change in tastes is to shift the demand curve for rental housing to the right, as the data in (Figure) shows and the shift from D0 to D1 on the graph. In this market, at the new equilibrium E1, the price of a rental unit would rise to $600 and the equilibrium quantity would increase to 17,000 units.

A Price Ceiling Example—Rent Control
The original intersection of demand and supply occurs at E0. If demand shifts from D0 to D1, the new equilibrium would be at E1—unless a price ceiling prevents the price from rising. If the price is not permitted to rise, the quantity supplied remains at 15,000. However, after the change in demand, the quantity demanded rises to 19,000, resulting in a shortage. 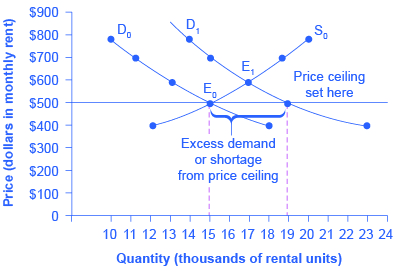 Price ceilings do not simply benefit renters at the expense of landlords. Rather, some renters (or potential renters) lose their housing as landlords convert apartments to co-ops and condos. Even when the housing remains in the rental market, landlords tend to spend less on maintenance and on essentials like heating, cooling, hot water, and lighting. The first rule of economics is you do not get something for nothing—everything has an opportunity cost. Thus, if renters obtain “cheaper” housing than the market requires, they tend to also end up with lower quality housing.

Price floors are sometimes called “price supports,” because they support a price by preventing it from falling below a certain level. Around the world, many countries have passed laws to create agricultural price supports. Farm prices and thus farm incomes fluctuate, sometimes widely. Even if, on average, farm incomes are adequate, some years they can be quite low. The purpose of price supports is to prevent these swings.

The most common way price supports work is that the government enters the market and buys up the product, adding to demand to keep prices higher than they otherwise would be. According to the Common Agricultural Policy reform passed in 2013, the European Union (EU) will spend about 60 billion euros per year, or 67 billion dollars per year (with the November 2016 exchange rate), or roughly 38% of the EU budget, on price supports for Europe’s farmers from 2014 to 2020.

Economists estimate that the high-income areas of the world, including the United States, Europe, and Japan, spend roughly $1 billion per day in supporting their farmers. If the government is willing to purchase the excess supply (or to provide payments for others to purchase it), then farmers will benefit from the price floor, but taxpayers and consumers of food will pay the costs. Agricultural economists and policy makers have offered numerous proposals for reducing farm subsidies. In many countries, however, political support for subsidies for farmers remains strong. This is either because the population views this as supporting the traditional rural way of life or because of industry’s lobbying power of the agro-business.

European Wheat Prices: A Price Floor Example
The intersection of demand (D) and supply (S) would be at the equilibrium point E0. However, a price floor set at Pf holds the price above E0 and prevents it from falling. The result of the price floor is that the quantity supplied Qs exceeds the quantity demanded Qd. There is excess supply, also called a surplus. 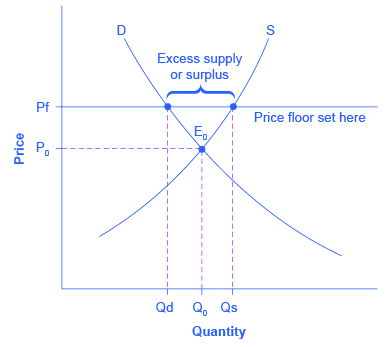 Price ceilings prevent a price from rising above a certain level. When a price ceiling is set below the equilibrium price, quantity demanded will exceed quantity supplied, and excess demand or shortages will result. Price floors prevent a price from falling below a certain level. When a price floor is set above the equilibrium price, quantity supplied will exceed quantity demanded, and excess supply or surpluses will result. Price floors and price ceilings often lead to unintended consequences.

Does a price ceiling change the equilibrium price?

What would be the impact of imposing a price floor below the equilibrium price?

Does a price ceiling attempt to make a price higher or lower?

How does a price ceiling set below the equilibrium level affect quantity demanded and quantity supplied?

Does a price floor attempt to make a price higher or lower?

How does a price floor set above the equilibrium level affect quantity demanded and quantity supplied?

Most government policy decisions have winners and losers. What are the effects of raising the minimum wage? It is more complex than simply producers lose and workers gain. Who are the winners and who are the losers, and what exactly do they win and lose? To what extent does the policy change achieve its goals?

Agricultural price supports result in governments holding large inventories of agricultural products. Why do you think the government cannot simply give the products away to poor people?

Can you propose a policy that would induce the market to supply more rental housing units?

A low-income country decides to set a price ceiling on bread so it can make sure that bread is affordable to the poor.(Figure) provides the conditions of demand and supply. What are the equilibrium price and equilibrium quantity before the price ceiling? What will the excess demand or the shortage (that is, quantity demanded minus quantity supplied) be if the price ceiling is set at $2.40? At $2.00? At $3.60?