Just as many Americans erroneously think that federal spending has grown considerably, many also believe that taxes have increased substantially. The top line of (Figure) shows total federal taxes as a share of GDP since 1960. Although the line rises and falls, it typically remains within the range of 17% to 20% of GDP, except for 2009, when taxes fell substantially below this level, due to recession.

Federal Taxes, 1960–2014
Federal tax revenues have been about 17–20% of GDP during most periods in recent decades. The primary sources of federal taxes are individual income taxes and the payroll taxes that finance Social Security and Medicare. Corporate income taxes and social insurance taxes provide smaller shares of revenue. (Source: Economic Report of the President, 2015. Table B-21, https://www.whitehouse.gov/administration/eop/cea/economic-report-of-the-President/2015) 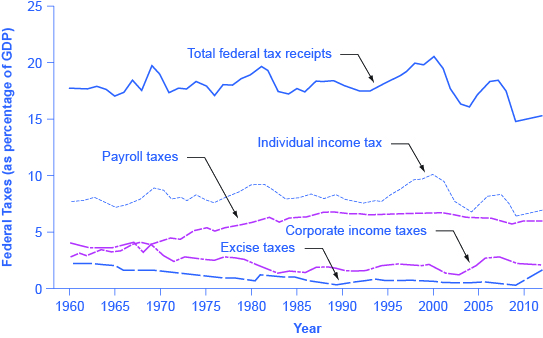 The income tax is a progressive tax, which means that the tax rates increase as a household’s income increases. Taxes also vary with marital status, family size, and other factors. The marginal tax rates (the tax due on all yearly income) for a single taxpayer range from 10% to 35%, depending on income, as the following Clear It Up feature explains.

How does the marginal rate work?

The key fact here is that the federal income tax is designed so that tax rates increase as income increases, up to a certain level. The payroll taxes that support Social Security and Medicare are designed in a different way. First, the payroll taxes for Social Security are imposed at a rate of 12.4% up to a certain wage limit, set at $118,500 in 2015. Medicare, on the other hand, pays for elderly healthcare, and is fixed at 2.9%, with no upper ceiling.

We also call the Medicare payroll tax a proportional tax; that is, a flat percentage of all wages earned. The Social Security payroll tax is proportional up to the wage limit, but above that level it becomes a regressive tax, meaning that people with higher incomes pay a smaller share of their income in tax.

The federal government has a few other, smaller sources of revenue. It imposes an excise tax—that is, a tax on a particular good—on gasoline, tobacco, and alcohol. As a share of GDP, the amount the government collects from these taxes has stayed nearly constant over time, from about 2% of GDP in the 1960s to roughly 3% by 2014, according to the nonpartisan Congressional Budget Office. The government also imposes an estate and gift tax on people who pass large amounts of assets to the next generation—either after death or during life in the form of gifts. These estate and gift taxes collected about 0.2% of GDP in the first decade of the 2000s. By a quirk of legislation, the government repealed the estate and gift tax in 2010, but reinstated it in 2011. Other federal taxes, which are also relatively small in magnitude, include tariffs the government collects on imported goods and charges for inspections of goods entering the country.

State and Local Tax Revenue as a Share of GDP, 1960–2014
State and local tax revenues have increased to match the rise in state and local spending. (Source: Economic Report of the President, 2015. Table B-21, https://www.whitehouse.gov/administration/eop/cea/economic-report-of-the-President/2015) 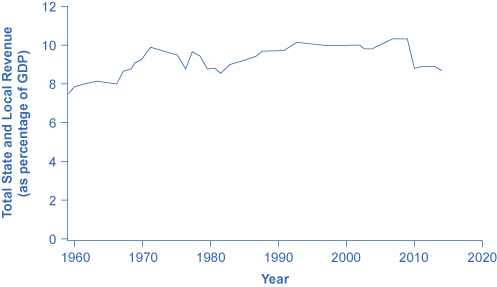 The two main federal taxes are individual income taxes and payroll taxes that provide funds for Social Security and Medicare; these taxes together account for more than 80% of federal revenues. Other federal taxes include the corporate income tax, excise taxes on alcohol, gasoline and tobacco, and the estate and gift tax. A progressive tax is one, like the federal income tax, where those with higher incomes pay a higher share of taxes out of their income than those with lower incomes. A proportional tax is one, like the payroll tax for Medicare, where everyone pays the same share of taxes regardless of income level. A regressive tax is one, like the payroll tax (above a certain threshold) that supports Social Security, where those with high income pay a lower share of income in taxes than those with lower incomes.

Suppose that gifts were taxed at a rate of 10% for amounts up to $100,000 and 20% for anything over that amount. Would this tax be regressive or progressive?

Progressive. People who give larger gifts subject to the higher tax rate would typically have larger incomes as well.

If an individual owns a corporation for which he is the only employee, which different types of federal tax will he have to pay?

What taxes would an individual pay if he were self-employed and the business is not incorporated?

The social security tax is 6.2% on employees’ income earned below $113,000. Is this tax progressive, regressive or proportional?

The tax is regressive because wealthy income earners are not taxed at all on income above $113,000. As a percent of total income, the social security tax hits lower income earners harder than wealthier individuals.

What are the main categories of U.S. federal government taxes?

What is the difference between a progressive tax, a proportional tax, and a regressive tax?

Excise taxes on tobacco and alcohol and state sales taxes are often criticized for being regressive. Although everyone pays the same rate regardless of income, why might this be so?

What is the benefit of having state and local taxes on income instead of collecting all such taxes at the federal level?

Matthews, Dylan. “America’s Taxes are the Most Progressive in the World. Its Government is Among the Least.” The Washington Post: WonkBlog (blog). April 5, 2013. http://www.washingtonpost.com/blogs/wonkblog/wp/2013/04/05/americas-taxes-are-the-most-progressive-in-the-world-its-government-is-among-the-least/.

excise tax
a tax on a specific good—on gasoline, tobacco, and alcohol

individual income tax
a tax based on the income, of all forms, received by individuals

payroll tax
a tax based on the pay received from employers; the taxes provide funds for Social Security and Medicare

proportional tax
a tax that is a flat percentage of income earned, regardless of level of income