The Economics of Pollution

From 1970 to 2012, the U.S. population increased by one-third and the size of the U.S. economy more than doubled. Since the 1970s, however, the United States, using a variety of anti-pollution policies, has made genuine progress against a number of pollutants. (Figure) lists the change in carbon dioxide emissions by energy users (from residential to industrial) according to the U.S. Energy Information Administration (EIA). The table shows that emissions of certain key air pollutants declined substantially from 2007 to 2012. They dropped 740 million metric tons (MMT) a year—a 12% reduction. This seems to indicate that there has been progress made in the United States in reducing overall carbon dioxide emissions, which contribute to the greenhouse effect.

Despite the gradual reduction in emissions from fossil fuels, many important environmental issues remain. Along with the still high levels of air and water pollution, other issues include hazardous waste disposal, destruction of wetlands and other wildlife habitats, and the impact on human health from pollution.

Private markets, such as the cell phone industry, offer an efficient way to put buyers and sellers together and determine what goods they produce, how they produce them and who gets them. The principle that voluntary exchange benefits both buyers and sellers is a fundamental building block of the economic way of thinking. However, what happens when a voluntary exchange affects a third party who is neither the buyer nor the seller?

As an example, consider a concert producer who wants to build an outdoor arena that will host country music concerts a half-mile from your neighborhood. You will be able to hear these outdoor concerts while sitting on your back porch—or perhaps even in your dining room. In this case, the sellers and buyers of concert tickets may both be quite satisfied with their voluntary exchange, but you have no voice in their market transaction. The effect of a market exchange on a third party who is outside or “external” to the exchange is called an externality. Because externalities that occur in market transactions affect other parties beyond those involved, they are sometimes called spillovers.

Pollution as a Negative Externality

Pollution is a negative externality. Economists illustrate the social costs of production with a demand and supply diagram. The social costs include the private costs of production that a company incurs and the external costs of pollution that pass on to society. (Figure) shows the demand and supply for manufacturing refrigerators. The demand curve (D) shows the quantity demanded at each price. The supply curve (Sprivate) shows the quantity of refrigerators that all firms in the industry supply at each price assuming they are taking only their private costs into account and they are allowed to emit pollution at zero cost. The market equilibrium (E0), where quantity supplied equals quantity demanded, is at a price of $650 per refrigerator and a quantity of 45,000 refrigerators. (Figure) reflects this information in the first three columns.

Taking Social Costs into Account: A Supply Shift
If the firm takes only its own costs of production into account, then its supply curve will be Sprivate, and the market equilibrium will occur at E0. Accounting for additional external costs of $100 for every unit produced, the firm’s supply curve will be Ssocial. The new equilibrium will occur at E1. 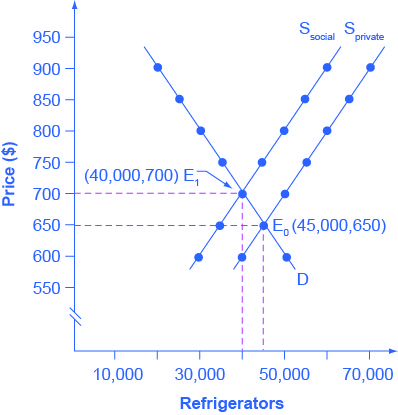 However, as a by-product of the metals, plastics, chemicals and energy that refrigerator manufacturers use, some pollution is created. Let’s say that, if these pollutants were emitted into the air and water, they would create costs of $100 per refrigerator produced. These costs might occur because of adverse effects on human health, property values, or wildlife habitat, reduction of recreation possibilities, or because of other negative impacts. In a market with no anti-pollution restrictions, firms can dispose of certain wastes absolutely free. Now imagine that firms which produce refrigerators must factor in these external costs of pollution—that is, the firms have to consider not only labor and material costs, but also the broader costs to society of harm to health and other costs caused by pollution. If the firm is required to pay $100 for the additional external costs of pollution each time it produces a refrigerator, production becomes more costly and the entire supply curve shifts up by $100.

As (Figure) and (Figure) illustrate, the firm will need to receive a price of $700 per refrigerator and produce a quantity of 40,000—and the firm’s new supply curve will be Ssocial. The new equilibrium will occur at E1. In short, taking the additional external costs of pollution into account results in a higher price, a lower quantity of production, and a lower quantity of pollution. The following Work It Out feature will walk you through an example, this time with musical accompaniment.

Identifying the Equilibrium Price and Quantity

(Figure) shows the supply and demand conditions for a firm that will play trumpets on the streets when requested. We measure output is measured as the number of songs played.

Step 3. Look down the columns to where the quantity demanded (the second column) is equal to the “quantity supplied without paying the costs of the externality” (the third column). Then refer to the first column of that row to determine the equilibrium price. In this case, the equilibrium price and quantity would be at a price of $10 and a quantity of five when we only take into account private costs.

Step 4. Identify the equilibrium price and quantity when we take into account the additional external costs. Look down the columns of quantity demanded (the second column) and the “quantity supplied after paying the costs of the externality” (the fourth column) then refer to the first column of that row to determine the equilibrium price. In this case, the equilibrium will be at a price of $12 and a quantity of four.

Step 5. Consider how taking into account the externality affects the equilibrium price and quantity. Do this by comparing the two equilibrium situations. If the firm is forced to pay its additional external costs, then production of trumpet songs becomes more costly, and the supply curve will shift up.

Remember that the supply curve is based on choices about production that firms make while looking at their marginal costs, while the demand curve is based on the benefits that individuals perceive while maximizing utility. If no externalities existed, private costs would be the same as the costs to society as a whole, and private benefits would be the same as the benefits to society as a whole. Thus, if no externalities existed, the interaction of demand and supply will coordinate social costs and benefits.

However, when the externality of pollution exists, the supply curve no longer represents all social costs. Because externalities represent a case where markets no longer consider all social costs, but only some of them, economists commonly refer to externalities as an example of market failure. When there is market failure, the private market fails to achieve efficient output, because either firms do not account for all costs incurred in the production of output and/or consumers do not account for all benefits obtained (a positive externality). In the case of pollution, at the market output, social costs of production exceed social benefits to consumers, and the market produces too much of the product.

Economic production can cause environmental damage. This tradeoff arises for all countries, whether high-income or low-income, and whether their economies are market-oriented or command-oriented.

An externality occurs when an exchange between a buyer and seller has an impact on a third party who is not part of the exchange. An externality, which is sometimes also called a spillover, can have a negative or a positive impact on the third party. If those parties imposing a negative externality on others had to account for the broader social cost of their behavior, they would have an incentive to reduce the production of whatever is causing the negative externality. In the case of a positive externality, the third party obtains benefits from the exchange between a buyer and a seller, but they are not paying for these benefits. If this is the case, then markets would tend to under produce output because suppliers are not aware of the additional demand from others. If the parties generating benefits to others would somehow receive compensation for these external benefits, they would have an incentive to increase production of whatever is causing the positive externality.

Identify the following situations as an example of a negative or a positive externality:

Identify whether the market supply curve will shift right or left or will stay the same for the following:

For each of your answers to (Figure), will equilibrium price rise or fall or stay the same?

What is an externality?

What is the difference between private costs and social costs?

In a market without environmental regulations, will the supply curve for a firm account for private costs, external costs, both, or neither? Explain.

Suppose you want to put a dollar value on the external costs of carbon emissions from a power plant. What information or data would you obtain to measure the external [not social] cost?

Show the market for cigarettes in equilibrium, assuming that there are no laws banning smoking in public. Label the equilibrium private market price and quantity as Pm and Qm. Add whatever is needed to the model to show the impact of the negative externality from second-hand smoking. (Hint: In this case it is the consumers, not the sellers, who are creating the negative externality.) Label the social optimal output and price as Pe and Qe. On the graph, shade in the deadweight loss at the market output.

(Figure), shows the supply and demand conditions for a firm that will play trumpets on the streets when requested. Qs1 is the quantity supplied without social costs. Qs2 is the quantity supplied with social costs. What is the negative externality in this situation? Identify the equilibrium price and quantity when we account only for private costs, and then when we account for social costs. How does accounting for the externality affect the equilibrium price and quantity?

externality
a market exchange that affects a third party who is outside or “external” to the exchange; sometimes called a “spillover”

market failure
When the market on its own does not allocate resources efficiently in a way that balances social costs and benefits; externalities are one example of a market failure

negative externality
a situation where a third party, outside the transaction, suffers from a market transaction by others

positive externality
a situation where a third party, outside the transaction, benefits from a market transaction by others