The Tradeoff between Economic Output and Environmental Protection 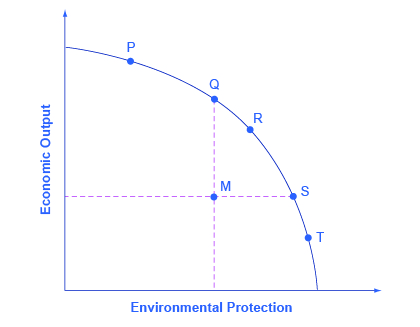 Economists do not have a great deal to say about the choice between P, Q, R, S and T in (Figure), all of which lie along the production possibility frontier. Countries with low per capita gross domestic product (GDP), such as China, place a greater emphasis on economic output—which in turn helps to produce nutrition, shelter, health, education, and desirable consumer goods. Countries with higher income levels, where a greater share of people have access to the basic necessities of life, may be willing to place a relatively greater emphasis on environmental protection.

How would an economist respond to claims of environmental damage caused by the Keystone XL project? Clearly, we can consider the environmental cost of oil spills a negative externality, but how large would these external costs be? Furthermore, are these costs “too high” when we measure them against any potential for economic benefit?

As this chapter indicates, in deciding whether pipeline construction is a good idea, an economist would want to know not only about the marginal benefits resulting from the additional pipeline construction, but also the potential marginal costs—and especially the pipeline’s marginal external costs. Typically these come in the form of environmental impact statements, which are usually required for such projects. The most recent impact statement, released in March 2013 by the Nebraska Department of State, considered the possibility of fewer pipeline miles going over the aquifer system and avoiding completely environmentally fragile areas. It indicated that pipeline construction would not harm “most resources”.

The Obama Administration declined to approve construction of the Keystone XL project. However, the Trump administration has already announced its willingness to do so. While we may fairly easily quantify the economic benefits of additional oil in the United States, the social costs are more challenging to measure. It seems that, in a period of less than robust economic growth, people are giving the benefit of the doubt that the marginal costs of additional oil generation will be less than the marginal benefits.

Depending on their different income levels and political preferences, countries are likely to make different choices about allocative efficiency—that is, the choice between economic output and environmental protection along the production possibility frontier. However, all countries should prefer to make a choice that shows productive efficiency—that is, the choice is somewhere on the production possibility frontier rather than inside it. Revisit Choice in a World of Scarcity for more on these terms.

A country called Sherwood is very heavily covered with a forest of 50,000 trees. There are proposals to clear some of Sherwood’s forest and grow corn, but obtaining this additional economic output will have an environmental cost from reducing the number of trees. (Figure) shows possible combinations of economic output and environmental protection.

In the tradeoff between economic output and environmental protection, what do the combinations on the protection possibility curve represent?

What does a point inside the production possibility frontier represent?

Technological innovations shift the production possibility curve. Look at graph you sketched for (Figure) Which types of technologies should a country promote? Should “clean” technologies be promoted over other technologies? Why or why not?

In the Land of Purity, there is only one form of pollution, called “gunk.” (Figure) shows possible combinations of economic output and reduction of gunk, depending on what kinds of environmental regulations you choose.