When news reports indicate that “the economy grew 1.2% in the first quarter,” the reports are referring to the percentage change in real GDP. By convention, governments report GDP growth is at an annualized rate: Whatever the calculated growth in real GDP was for the quarter, we multiply it by four when it is reported as if the economy were growing at that rate for a full year.

U.S. GDP, 1900–2016
Real GDP in the United States in 2016 (in 2009 dollars) was about $16.7 trillion. After adjusting to remove the effects of inflation, this represents a roughly 20-fold increase in the economy’s production of goods and services since the start of the twentieth century. (Source: bea.gov) 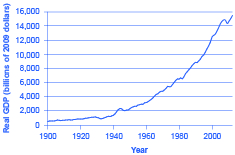 (Figure) shows the pattern of U.S. real GDP since 1900. Short term declines have regularly interrupted the generally upward long-term path of GDP. We call a significant decline in real GDP a recession. We call an especially lengthy and deep recession a depression. The severe drop in GDP that occurred during the 1930s Great Depression is clearly visible in the figure, as is the 2008–2009 Great Recession.

Real GDP is important because it is highly correlated with other measures of economic activity, like employment and unemployment. When real GDP rises, so does employment.

The most significant human problem associated with recessions (and their larger, uglier cousins, depressions) is that a slowdown in production means that firms need to lay off or fire some of their workers. Losing a job imposes painful financial and personal costs on workers, and often on their extended families as well. In addition, even those who keep their jobs are likely to find that wage raises are scanty at best—or their employers may ask them to take pay cuts.

(Figure) lists the pattern of recessions and expansions in the U.S. economy since 1900. We call the highest point of the economy, before the recession begins, the peak. Conversely, the lowest point of a recession, before a recovery begins, is the trough. Thus, a recession lasts from peak to trough, and an economic upswing runs from trough to peak. We call the economy’s movement from peak to trough and trough to peak the business cycle. It is intriguing to notice that the three longest trough-to-peak expansions of the twentieth century have happened since 1960. The most recent recession started in December 2007 and ended formally in June 2009. This was the most severe recession since the 1930s Great Depression. The ongoing expansion since the June 2009 trough will also be quite long, comparatively, having already reached 90 months at the end of 2016.

A private think tank, the National Bureau of Economic Research (NBER), tracks business cycles for the U.S. economy. However, the effects of a severe recession often linger after the official ending date assigned by the NBER.

Over the long term, U.S. real GDP have increased dramatically. At the same time, GDP has not increased the same amount each year. The speeding up and slowing down of GDP growth represents the business cycle. When GDP declines significantly, a recession occurs. A longer and deeper decline is a depression. Recessions begin at the business cycle’s peak and end at the trough.

Without looking at (Figure), return to (Figure). If we define a recession as a significant decline in national output, can you identify any post-1960 recessions in addition to the 2008-2009 recession? (This requires a judgment call.)

According to (Figure), how often have recessions occurred since the end of World War II (1945)?

11 recessions in approximately 70 years averages about one recession every six years.

According to (Figure), how long has the average recession lasted since the end of World War II?

The table lists the “Months of Contraction” for each recession. Averaging these figures for the post-WWII recessions gives an average duration of 11 months, or slightly less than a year.

According to (Figure), how long has the average expansion lasted since the end of World War II?

The table lists the “Months of Expansion.” Averaging these figures for the post-WWII expansions gives an average expansion of 60.5 months, or more than five years.

What are typical GDP patterns for a high-income economy like the United States in the long run and the short run?

Why do you think that GDP does not grow at a steady rate, but rather speeds up and slows down?

depression
an especially lengthy and deep decline in output

peak
during the business cycle, the highest point of output before a recession begins

trough
during the business cycle, the lowest point of output in a recession, before a recovery begins