As economists see it, trade surpluses can be either good or bad, depending on circumstances, and trade deficits can be good or bad, too. The challenge is to understand how the international flows of goods and services are connected with international flows of financial capital. In this module we will illustrate the intimate connection between trade balances and flows of financial capital in two ways: a parable of trade between Robinson Crusoe and Friday, and a circular flow diagram representing flows of trade and payments.

To understand how economists view trade deficits and surpluses, consider a parable based on the story of Robinson Crusoe. Crusoe, as you may remember from the classic novel by Daniel Defoe first published in 1719, was shipwrecked on a desert island. After living alone for some time, he is joined by a second person, whom he names Friday. Think about the balance of trade in a two-person economy like that of Robinson and Friday.

Robinson and Friday trade goods and services. Perhaps Robinson catches fish and trades them to Friday for coconuts, or Friday weaves a hat out of tree fronds and trades it to Robinson for help in carrying water. For a period of time, each individual trade is self-contained and complete. Because each trade is voluntary, both Robinson and Friday must feel that they are receiving fair value for what they are giving. As a result, each person’s exports are always equal to his imports, and trade is always in balance between the two. Neither person experiences either a trade deficit or a trade surplus.

However, one day Robinson approaches Friday with a proposition. Robinson wants to dig ditches for an irrigation system for his garden, but he knows that if he starts this project, he will not have much time left to fish and gather coconuts to feed himself each day. He proposes that Friday supply him with a certain number of fish and coconuts for several months, and then after that time, he promises to repay Friday out of the extra produce that he will be able to grow in his irrigated garden. If Friday accepts this offer, then a trade imbalance comes into being. For several months, Friday will have a trade surplus: that is, he is exporting to Robinson more than he is importing. More precisely, he is giving Robinson fish and coconuts, and at least for the moment, he is receiving nothing in return. Conversely, Robinson will have a trade deficit, because he is importing more from Friday than he is exporting.

This parable raises several useful issues in thinking about what a trade deficit and a trade surplus really mean in economic terms. The first issue that this story of Robinson and Friday raises is this: Is it better to have a trade surplus or a trade deficit? The answer, as in any voluntary market interaction, is that if both parties agree to the transaction, then they may both be better off. Over time, if Robinson’s irrigated garden is a success, it is certainly possible that both Robinson and Friday can benefit from this agreement.

The parable raises a second issue: What can go wrong? Robinson’s proposal to Friday introduces an element of uncertainty. Friday is, in effect, making a loan of fish and coconuts to Robinson, and Friday’s happiness with this arrangement will depend on whether Robinson repays that loan as planned, in full and on time. Perhaps Robinson spends several months loafing and never builds the irrigation system, or perhaps Robinson has been too optimistic about how much he will be able to grow with the new irrigation system, which turns out not to be very productive. Perhaps, after building the irrigation system, Robinson decides that he does not want to repay Friday as much as he previously agreed. Any of these developments will prompt a new round of negotiations between Friday and Robinson. Why the repayment failed is likely to shape Friday’s attitude toward these renegotiations. If Robinson worked very hard and the irrigation system just did not increase production as intended, Friday may have some sympathy. If Robinson loafed or if he just refuses to pay, Friday may become irritated.

A third issue that the parable raises is that an intimate relationship exists between a trade deficit and international borrowing, and between a trade surplus and international lending. The size of Friday’s trade surplus is exactly how much he is lending to Robinson. The size of Robinson’s trade deficit is exactly how much he is borrowing from Friday. To economists, a trade surplus literally means the same thing as an outflow of financial capital, and a trade deficit literally means the same thing as an inflow of financial capital. This last insight is worth exploring in greater detail, which we will do in the following section.

The story of Robinson and Friday also provides a good opportunity to consider the law of comparative advantage, which you learn more about in the International Trade chapter. The following Work It Out feature steps you through calculating comparative advantage for the wheat and cloth traded between the United States and Great Britain in the 1800s.

In the 1800s, the United States and Britain traded wheat and cloth. (Figure) shows the varying hours of labor per unit of output.

Step 3. Determine the relative price of one good in terms of the other good. The price of wheat, in this example, is the amount of cloth you have to give up. To find this price, convert the hours per unit of wheat and cloth into units per hour. To do so, observe that in the United States it takes eight hours to make a bushel of wheat, so workers can process 1/8 of a bushel of wheat in an hour. It takes nine hours to make a yard of cloth in the United States, so workers can produce 1/9 of a yard of cloth in an hour. If you divide the amount of cloth (1/9 of a yard) by the amount of wheat you give up (1/8 of a bushel) in an hour, you find the price (8/9) of one good (wheat) in terms of the other (cloth).

The connection between trade balances and international flows of financial capital is so close that economists sometimes describe the balance of trade as the balance of payments. Each category of the current account balance involves a corresponding flow of payments between a given country and the rest of the world economy. 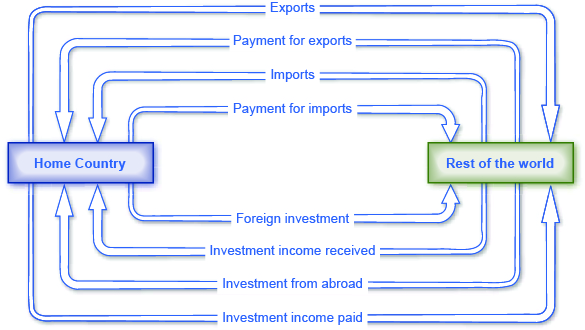 It is important to recognize that an inflow and outflow of foreign capital does not necessarily refer to a debt that governments owe to other governments, although government debt may be part of the picture. Instead, these international flows of financial capital refer to all of the ways in which private investors in one country may invest in another country—by buying real estate, companies, and financial investments like stocks and bonds.

International flows of goods and services are closely connected to the international flows of financial capital. A current account deficit means that, after taking all the flows of payments from goods, services, and income together, the country is a net borrower from the rest of the world. A current account surplus is the opposite and means the country is a net lender to the rest of the world.

How does the bottom portion of (Figure), showing the international flow of investments and capital, differ from the upper portion?

Explain the relationship between a current account deficit or surplus and the flow of funds.

Is it better for your country to be an international lender or borrower?