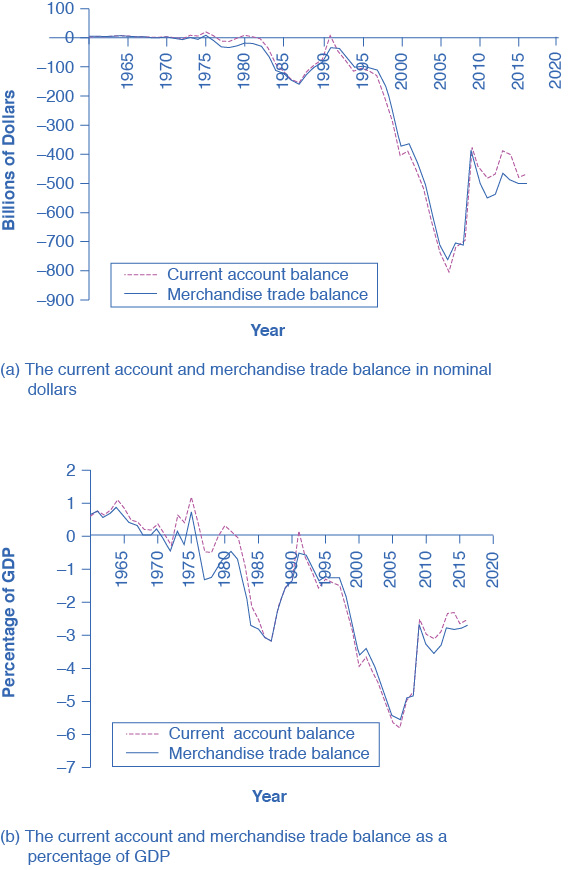 By either measure, the U.S. balance of trade pattern is clear. From the 1960s into the 1970s, the U.S. economy had mostly small trade surpluses—that is, the graphs in (Figure) show positive numbers. However, starting in the 1980s, the trade deficit increased rapidly, and after a tiny surplus in 1991, the current account trade deficit became even larger in the late 1990s and into the mid-2000s. However, the trade deficit declined in 2009 after the recession had taken hold, then rebounded partially in 2010 and has remained stable up through 2016.

(Figure) shows the U.S. trade picture in 2013 compared with some other economies from around the world. While the U.S. economy has consistently run trade deficits in recent years, Japan and many European nations, among them France and Germany, have consistently run trade surpluses. Some of the other countries listed include Brazil, the largest economy in Latin America; Nigeria, along with South Africa competing to be the largest economy in Africa; and China, India, and Korea. The first column offers one measure of an economy’s globalization: exports of goods and services as a percentage of GDP. The second column shows the trade balance. Usually, most countries have trade surpluses or deficits that are less than 5% of GDP. As you can see, the U.S. current account balance is –2.6% of GDP, while Germany’s is 8.4% of GDP.

In what way does comparing a country’s exports to GDP reflect its degree of globalization?

GDP is a dollar value of all production of goods and services. Exports are produced domestically but shipped abroad. The percent ratio of exports to GDP gives us an idea of how important exports are to the national economy out of all goods and services produced. For example, exports represent only 14% of U.S. GDP, but 50% of Germany’s GDP

At one point Canada’s GDP was $1,800 billion and its exports were $542 billion. What was Canada’s export ratio at this time?

Why does the trade balance and the current account balance track so closely together over time?

The trade balance is the difference between exports and imports. The current account balance includes this number (whether it is a trade balance or a trade surplus), but also includes international flows of money from global investments.

In recent decades, has the U.S. trade balance usually been in deficit, surplus, or balanced?

If a country is a big exporter, is it more exposed to global financial crises?

If countries reduced trade barriers, would the international flows of money increase?