Wages and Employment in an Imperfectly Competitive Labor Market

When a job applicant is bargaining with an employer for a position, the applicant is often at a disadvantage—needing the job more than the employer needs that particular applicant. John Bates Clark (1847–1938), often named as the first great American economist, wrote in 1907: “In the making of the wages contract the individual laborer is always at a disadvantage. He has something which he is obliged to sell and which his employer is not obliged to take, since he [that is, the employer] can reject single men with impunity.”

To give workers more power, the U.S. government has passed, in response to years of labor protests, a number of laws to create a more equal balance of power between workers and employers. These laws include some of the following:

(Figure) lists some prominent U.S. workplace protection laws. Many of the laws listed in the table were only the start of labor market regulations in these areas and have been followed, over time, by other related laws, regulations, and court rulings.

A competitive labor market is one where there are many potential employers for a given type of worker, say a secretary or an accountant. Suppose there is only one employer in a labor market. Because that employer has no direct competition in hiring, if they offer lower wages than would exist in a competitive market, employees will have few options. If they want a job, they must accept the offered wage rate. Since the employer is exploiting its market power, we call the firm a monopsony. The classical example of monopsony is the sole coal company in a West Virginia town. If coal miners want to work, they must accept what the coal company is paying. This is not the only example of monopsony. Think about surgical nurses in a town with only one hospital. Employers that have at least some market power over potential employees is not that unusual. After all, most firms have many employees while there is only one employer. Thus, even if there is some competition for workers, it may not feel that way to potential employees unless they do their research and find the opposite.

How does market power by an employer affect labor market outcomes? Intuitively, one might think that wages will be lower than in a competitive labor market. Let’s prove it. We will tell the story for a monopsonist, but the results will be qualitatively similar, although less extreme for any firm with labor market power.

Think back to monopoly. The good news is that because the monopolist is the sole supplier in the market, it can charge any price it wishes. The bad news is that if it wants to sell a greater quantity of output, it must lower the price it charges. Monopsony is analogous. Because the monopsonist is the sole employer in a labor market, it can offer any wage that it wishes. However, because they face the market supply curve for labor, if they want to hire more workers, they must raise the wage they pay. This creates a quandary, which we can understand by introducing a new concept: the marginal cost of labor. The marginal cost of labor is the cost to the firm of hiring one more worker. However, here is the thing: we assume that the firm is determining how many workers to hire in total. They are not hiring sequentially. Let’s look how this plays out with the example in (Figure).

There are a couple of things to notice from the table. First, the marginal cost increases faster than the wage rate. In fact, for any number of workers more than one, the marginal cost of labor is greater than the wage. This is because to hire one more worker requires paying a higher wage rate, not just for the new worker but for all the previous hires also. We can see this graphically in Figure 14.7.

The Marginal Cost of Labor
Since monopsonies are the sole demander for labor, they face the market supply curve for labor. In order to increase employment they must raise the wage they pay not just for new workers, but for all the existing workers they could have hired at the previous lower wage. As a result, the marginal cost of additional hiring labor is greater than the wage, and thus for any level of employment (above the first worker), MCL is above the Market Supply of Labor. 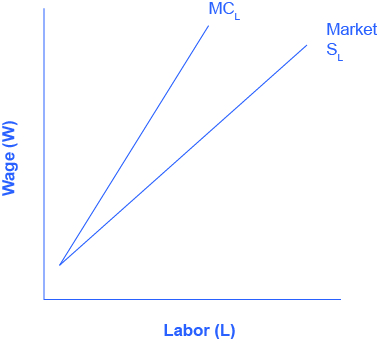 Labor Market Outcomes Under Monopsony
A monopsony will hire workers up to the point Lm where its demand for labor equals the marginal cost of additional labor, paying the wage Wm given by the supply curve of labor necessary to obtain Lm workers. 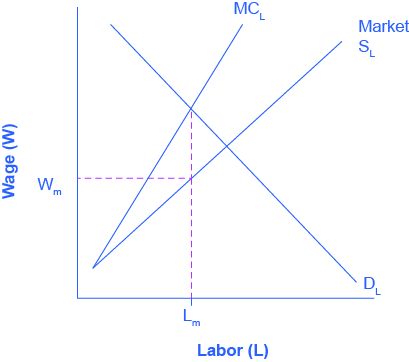 If the firm wants to maximize profits, it will hire labor up to the point Lm where DL = VMP (or MRP) = MCL., as (Figure) shows. Then, the supply curve for labor shows the wage the firm will have to pay to attract Lm workers. Graphically, we can draw a vertical line up from Lm to the Supply Curve for label and then read the wage Wm off the vertical axis to the left.

How does this outcome compare to what would occur in a perfectly competitive market? A competitive market would operate where DL = SL, hiring Lc workers and paying Wc wage. In other words, under monopsony employers hire fewer workers and pay a lower wage. While pure monopsony may be rare, many employers have some degree of market power in labor markets. The outcomes for those employers will be qualitatively similar though not as extreme as monopsony. 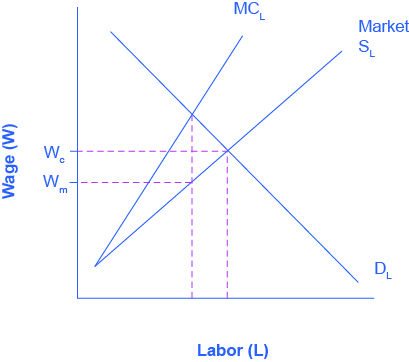 A monopsony is the sole employer in a labor market. The monopsony can pay any wage it chooses, subject to the market supply of labor. This means that if the monopsony offers too low a wage, they may not find enough workers willing to work for them. Since to obtain more workers, they must offer a higher wage, the marginal cost of additional labor is greater than the wage. To maximize profits, a monopsonist will hire workers up to the point where the marginal cost of labor equals their labor demand. This results in a lower level of employment than a competitive labor market would provide, but also a lower equilibrium wage.

What is the marginal cost of labor for a firm that operates in a competitive labor market? How does this compare with the MCL for a monopsony?

Given the decline in union membership over the past 50 years, what does the theory of bilateral monopoly suggest will have happened to the equilibrium level of wages over time? Why?

monopsony
a labor market where there is only one employer