As early as 1948, Ralph Stogdill stated that “the qualities, characteristics, and skills required in a leader are determined to a large extent by the demands of the situation in which he is to function as a leader.”

In addition, it had been observed that two major leader behaviors, initiating structure and consideration, didn’t always lead to equally positive outcomes. That is, there are times when initiating structure results in performance increases and follower satisfaction, and there are times when the results are just the opposite. Contradictory findings such as this lead researchers to ask “Under what conditions are the results positive in nature?” and “When and why are they negative at other times?” Obviously, situational differences and key contingencies are at work.

One of the earliest, best-known, and most controversial situation-contingent leadership theories was set forth by Fred E. Fiedler from the University of Washington.

This theory is known as the contingency theory of leadership. According to Fiedler, organizations attempting to achieve group effectiveness through leadership must assess the leader according to an underlying trait, assess the situation faced by the leader, and construct a proper match between the two.

Leaders are asked about their least-preferred coworker (LPC), the person with whom they least like to work. The most popular interpretation of the LPC score is that it reflects a leader’s underlying disposition toward others—for example: pleasant/unpleasant, cold/warm, friendly/unfriendly, and untrustworthy/trustworthy. (You can examine your own LPC score by completing the LPC self-assessment on the following page.)

Fiedler states that leaders with high LPC scores are relationship oriented—they need to develop and maintain close interpersonal relationships. They tend to evaluate their least-preferred coworkers in fairly favorable terms. Task accomplishment is a secondary need to this type of leader and becomes important only after the need for relationships is reasonably well satisfied. In contrast, leaders with low LPC scores tend to evaluate the individuals with whom they least like to work fairly negatively. They are task-oriented people, and only after tasks have been accomplished are low-LPC leaders likely to work on establishing good social and interpersonal relations.

Some situations favor leaders more than others do. To Fiedler, situational favorableness is the degree to which leaders have control and influence and therefore feel that they can determine the outcomes of a group interaction.

F.E. Fiedler. 1976. The leadership game: Matching the men to the situation. Organizational Dynamics, 4, 9.

Personal conversation between Robert J. House and Fred Fiedler in September 1996, as reported in House & Aditya, 1997.

Three factors work together to determine how favorable a situation is to a leader. In order of importance, they are (1) leader-member relations—the degree of the group’s acceptance of the leader, their ability to work well together, and members’ level of loyalty to the leader; (2) task structure—the degree to which the task specifies a detailed, unambiguous goal and how to achieve it; and (3) position power—a leader’s direct ability to influence group members. The situation is most favorable for a leader when the relationship between the leader and group members is good, when the task is highly structured, and when the leader’s position power is strong (cell 1 in (Figure)). The least-favorable situation occurs under poor leader-member relations, an unstructured task, and weak position power (cell 8). 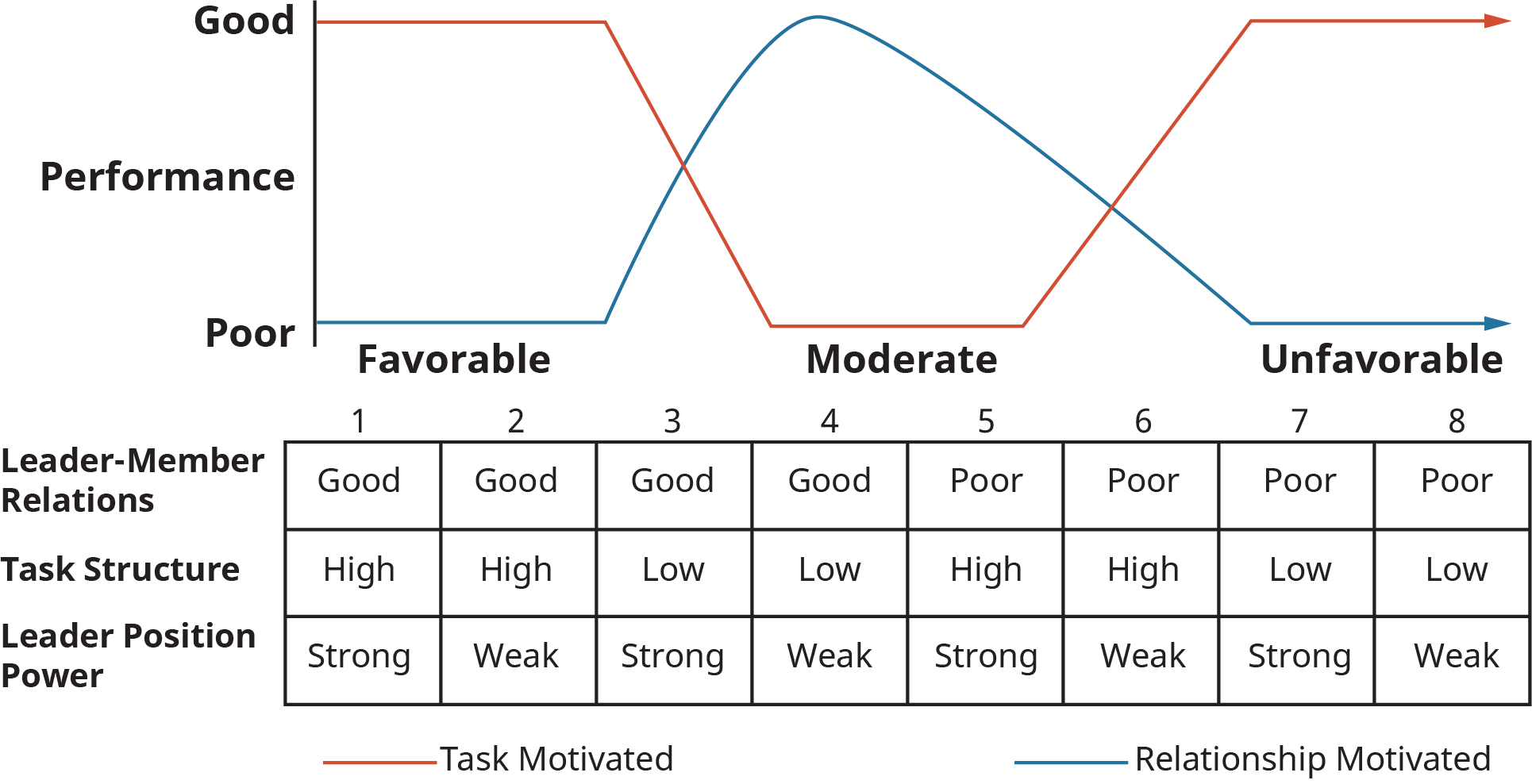 Some combinations of leaders and situations work well; others do not. In search of the best combinations, Fiedler examined a large number of leadership situations. He argued that most leaders have a relatively unchangeable or dominant style, so organizations need to design job situations to fit the leader.

While the model has not been fully tested and tests have often produced mixed or contradictory findings,

See, for example, the supporting results of M.M. Chemers & G.J. Skrzypek. 1972. Experimental test of the contingency model of leadership effectiveness. Journal of Personality and Social Psychology 24:172–177; and the contradictory results of R.P. Vecchio. 1977. An empirical examination of the validity of Fiedler’s model of leadership effectiveness. Organizational Behavior and Human Performance 19:180–206.

Fiedler’s research indicates that relationship-oriented (high-LPC) leaders are much more effective under conditions of intermediate favorability than under either highly favorable or highly unfavorable situations. Fiedler attributes the success of relationship-oriented leaders in situations with intermediate favorability to the leader’s nondirective, permissive attitude; a more directive attitude could lead to anxiety in followers, conflict in the group, and a lack of cooperation.

For highly favorable and unfavorable situations, task-oriented leaders (those with a low LPC) are very effective. As tasks are accomplished, a task-oriented leader allows the group to perform its highly structured tasks without imposing more task-directed behavior. The job gets done without the need for the leader’s direction. Under unfavorable conditions, task-oriented behaviors, such as setting goals, detailing work methods, and guiding and controlling work behaviors, move the group toward task accomplishment.

As might be expected, leaders with mid-range LPC scores can be more effective in a wider range of situations than high- or low-LPC leaders.

Controversy over the Theory

Although Fiedler’s theory often identifies appropriate leader-situation matches and has received broad support, it is not without critics. Some note that it characterizes leaders through reference to their attitudes or personality traits (LPC) while it explains the leader’s effectiveness through their behaviors—those with a particular trait will behave in a particular fashion. The theory fails to make the connection between the least-preferred coworker attitude and subsequent behaviors. In addition, some tests of the model have produced mixed or contradictory findings.

Finally, what is the true meaning of the LPC score—exactly what is being revealed by a person who sees their least-preferred coworker in positive or negative terms? Robert J. House and Ram N. Aditya recently noted that, in spite of the criticisms, there has been substantial support for Fiedler’s theory.

The model of leadership advanced by House and Evans is called the path-goal theory of leadership because it suggests that an effective leader provides organizational members with a path to a valued goal. According to House, the motivational function of the leader consists of increasing personal payoffs to organizational members for work-goal attainment, and making the path to these payoffs easier to travel by clarifying it, reducing roadblocks and pitfalls, and increasing the opportunities for personal satisfaction en route.

Effective leaders therefore provide rewards that are valued by organizational members. These rewards may be pay, recognition, promotions, or any other item that gives members an incentive to work hard to achieve goals. Effective leaders also give clear instructions so that ambiguities about work are reduced and followers understand how to do their jobs effectively. They provide coaching, guidance, and training so that followers can perform the task expected of them. They also remove barriers to task accomplishment, correcting shortages of materials, inoperative machinery, or interfering policies.

According to the path-goal theory, the challenge facing leaders is basically twofold. First, they must analyze situations and identify the most appropriate leadership style. For example, experienced employees who work on a highly structured assembly line don’t need a leader to spend much time telling them how to do their jobs—they already know this. The leader of an archeological expedition, though, may need to spend a great deal of time telling inexperienced laborers how to excavate and care for the relics they uncover.

Second, leaders must be flexible enough to use different leadership styles as appropriate. To be effective, leaders must engage in a wide variety of behaviors. Without an extensive repertoire of behaviors at their disposal, a leader’s effectiveness is limited.

R. Hoojiberg. 1996. A multidimensional approach toward leadership: An extension of the concept of behavioral complexity. Human Relations 49(7):917–946.

According to path-goal theory, there are four important dimensions of leader behavior, each of which is suited to a particular set of situational demands.

Multiculturalism is a new reality as today’s society and workforce become increasingly diverse. This naturally leads to the question “Is there a need for a new and different style of leadership?”

The vast majority of the contemporary scholarship directed toward understanding leaders and the leadership process has been conducted in North America and Western Europe. Westerners have “developed a highly romanticized, heroic view of leadership.”

Leaders occupy center stage in organizational life. We use leaders in our attempts to make sense of the performance of our groups, clubs, organizations, and nations. We see them as key to organizational success and profitability, we credit them with organizational competitiveness, and we blame them for organizational failures. At the national level, recall that President Reagan brought down Communism and the Berlin Wall, President Bush won the Gulf War, and President Clinton brought unprecedented economic prosperity to the United States during the 1990s.

This larger-than-life role ascribed to leaders and the Western romance with successful leaders raise the question “How representative is our understanding of leaders and leadership across cultures?” That is, do the results that we have examined in this chapter generalize to other cultures?

Geert Hofstede points out that significant value differences (individualism-collectivism, power distance, uncertainty avoidance, masculinity-femininity, and time orientation) cut across societies. Thus, leaders of culturally diverse groups will encounter belief and value differences among their followers, as well as in their own leader-member exchanges.

There appears to be consensus that a universal approach to leadership and leader effectiveness does not exist. Cultural differences work to enhance and diminish the impact of leadership styles on group effectiveness. For example, when leaders empower their followers, the effect for job satisfaction in India has been found to be negative, while in the United States, Poland, and Mexico, the effect is positive.

The existing evidence suggests similarities as well as differences in such areas as the effects of leadership styles, the acceptability of influence attempts, and the closeness and formality of relationships. The distinction between task and relationship-oriented leader behavior, however, does appear to be meaningful across cultures.

Leaders whose behaviors reflect support, kindness, and concern for their followers are valued and effective in Western and Asian cultures. Yet it is also clear that democratic, participative, directive, and contingent-based rewards and punishment do not produce the same results across cultures. The United States is very different from Brazil, Korea, New Zealand, and Nigeria. The effective practice of leadership necessitates a careful look at, and understanding of, the individual differences brought to the leader-follower relationship by cross-cultural contexts.

We now know that there is no one best way to be an effective leader in all circumstances. Leaders need to recognize that how they choose to lead will affect the nature of their followers’ compliance with their influence tactics, and ultimately impacts motivation, satisfaction, performance, and group effectiveness. In addition, the nature of the situation—contextual demands and characteristics of the follower—dictates the type of leadership that is likely to be effective. Fiedler focuses on leader traits and argues that the favorableness of the leadership situation dictates the type of leadership approach needed. He recommends selecting leaders to match the situation or changing the situation to match the leader. Path-goal theory focuses on leader behavior that can be adapted to the demands of a particular work environment and organizational members’ characteristics. Path-goal theorists believe both that leaders can be matched with the situation and that the situation can be changed to match leaders. Together, these theories make clear that leadership is effective when the characteristics and behavior of the leader match the demands of the situation.

contingency theory of leadership
A theory advanced by Dr. Fred E. Fiedler that suggests that different leadership styles are effective as a function of the favorableness of the leadership situation least preferred.

Least-preferred coworker (LPC)
The person with whom the leader least likes to work.

path-goal theory of leadership
A theory that posits that leadership is path- and goal-oriented, suggesting that different leadership styles are effective as a function of the task confronting the group.