The Control- and Involvement-Oriented Approaches to Planning and Controlling

Planning and controlling are approached with distinctive differences under control-oriented and involvement-oriented approaches to management. In the mechanistic organization, both activities tend to be lodged with management in the organizational hierarchy, often above the point in the organization where the plans are being carried out. The hierarchy plays an active role in both the planning and controlling process, and the employee is often a passive player carrying out the planning directives and the target of the control activity.

The organic organization, with its involvement-oriented management practices, places the employee as an active player in both the planning and controlling activity. Management’s role becomes one of a consultant, facilitator, enabler, philosopher, teacher, coach, and resource provider as employees take on active roles in planning and controlling and in assuming responsibility for the execution of both activities.

Systems such as MBO are much more likely to characterize the planning and controlling process in involvement-oriented organizations than in control-oriented organizations. Control in high-involvement organizations is diffused through many groups and is commonly focused on task accomplishment and overcoming obstacles, with a de-emphasis on fixing blame with a particular individual for performance failures. In many control-oriented management systems, the reins of control are firmly held by the hierarchy, and the activities of individuals are carefully controlled. Performance failures, therefore, tend to become focused on the individual who fails to perform.

Finally, mechanistic organizations are more likely to create large planning departments and to centralize the planning function with specialists. As organizations confront increasing environmental or technology-induced uncertainty, rapid environmental change, and turbulence, planning and controlling move closer to the point in the organization where the plans are implemented and carried out on a day-to-day basis. In place of hierarchy-based control, organizations rely more on professional employees and groups of employees to control their own actions as they execute organizational plans.

Maersk Line ship
A new blockchain solution from IBM and Maersk will help manage and track the paper trail of tens of millions of shipping containers across the world by digitizing the supply chain process. (Credit: Kees Torn/ flickr/ Attribution 2.0 Generic (CC BY 2.0)) 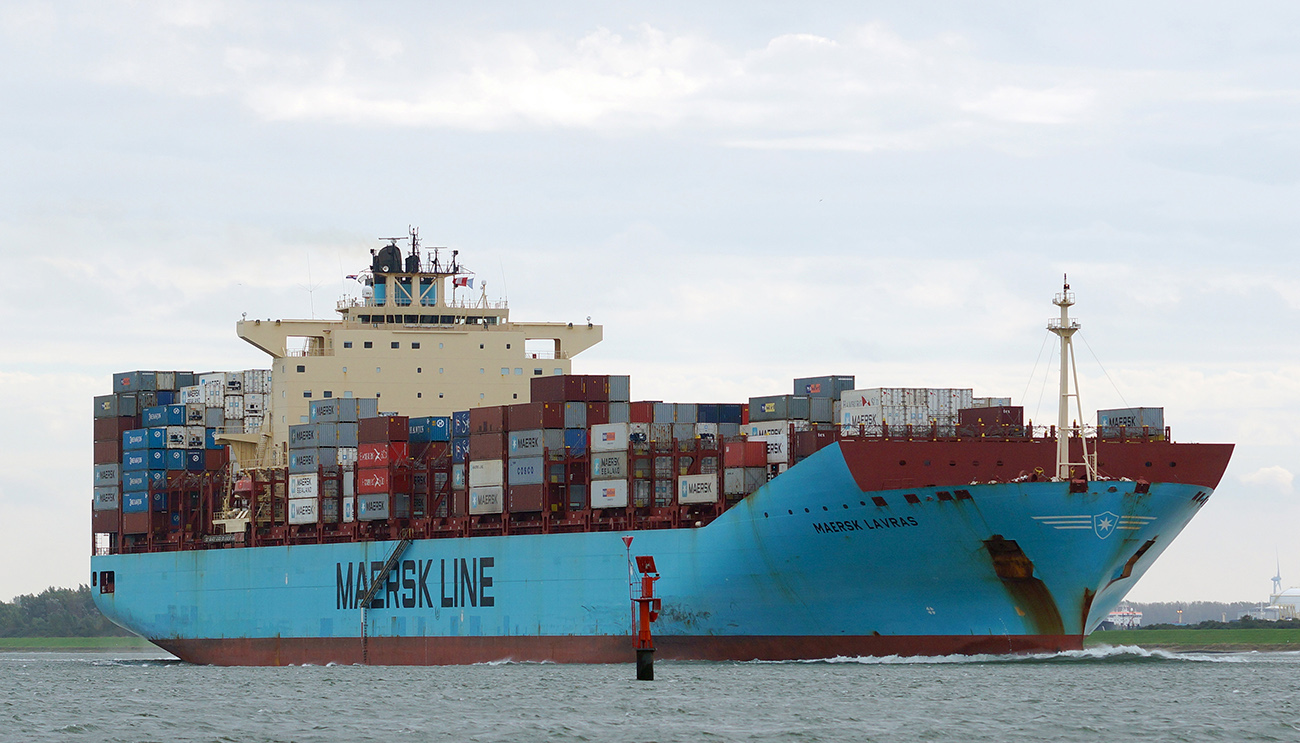 When a business goes from being local, even if local is defined as a whole country, to being a global business, a whole new set of constraints is presented and must be controlled and planned. Traditionally, currency fluctuations can be one of the more interesting if not daunting elements of global business. Modern technology, however, has taken that challenge one step further.

The impact of currency fluctuations on profitability is discussed in economics, finance, and various accounting texts. What currency should be used to buy inventory? To sell inventory? How do puts and calls mitigate currency fluctuations? Is the added expense worth covering the potential loss? These are all questions businesses must consider when moving into a global market. When Tata Consultancy Services, India’s largest software services exporter, reported first quarter results that were below expectations in the first quarter of 2017, much of the blame was laid on currency fluctuations, which accounted for 80 basis points of the drop in profitability (Alawadhi 2017).

But starting in 2009, financial transactions, including global financial transactions, became a little more complicated. Or did they? Bitcoin emerged in 2009 from an unknown source only known as Satoshi Nakamoto (The Economist Explains 2015). Built on what is called blockchain technology, Bitcoin and other cryptocurrencies (jargon for digital assets that are secured by cryptography) are a technological unknown in the future of exchange and financing. The technology behind blockchain and the resulting assets is complicated but not necessary to understand the potential effects of the technology. Effectively, Bitcoin is a “peer-to-peer electronic cash system that uses a distributed ledger to bypass central control systems for transactions” (Pepijn 2017). As peer-to-peer transactions, cryptocurrencies bypass the normal channels, such as banks and credit card processors. Theoretically, this lowers transaction costs for both the buyer and the seller. Blockchain, which can include assets beyond currency, also allows firms to raise funds directly from investors, bypassing investment bankers and venture capitalists. According to the Financial Post, “High levels of encryption protect the transaction by validating the parties involved and by preventing hacking, erasure or amendments” (Francis 2017).

Bitcoin uses blockchain technology to maintain a record of its currency ecosystem. The viability of blockchain technology as a thing in itself should not be confused with Bitcoin’s price volatility, which has seen its price increase (and decrease) by several orders of magnitude. Shady bitcoin exchanges and a shifting regulatory landscape, a result of governments attempting to regulate the very concept of a means of exchange, have produced enormous swings up and down (Crypto Investor 2017).

But however volatile the new currencies, blockchain technology is seeing other, relatively sane applications. Isabel Cooke at Barclays has already used “distributed ledger technology,” or blockchain technology, to process a trade finance transaction in the real world: “Our pilot trade brought the sign-off time from ten days to four hours. It reduced costs, added transparency, decreased risk and looked to improve the customer experience” (Why blockchain is ‘difficult and exciting’ 2017). With an immutable, public ledger to work from, “Creating a really clear audit trail across organisations provides real value – whether that’s with land registration or trade finance. If we have a shared view of data on ledgers, we can then build business logic on top of that, and that can apply to interest rates swaps or smart contracts within the investment bank” (Crypto Investor 2017).

So are blockchains and cryptocurrencies the wave of the future or just a modern financial bubble or threat to global financial security? Some industry writers say that the decentralization and lower costs of the technology are necessary and will launch even more industries (Pepijn 2017). Even governments and central banks are looking at the potential benefits and costs savings of an electronic currency. According to investment banker Alex Tapscott, if the Bank of England replaced 30 percent of the traditional British currency with digital money, he thinks it would add 3 percent to British GDP. The expectation is that digital currency would lower consumer prices and increase sellers’ profits. And the encryption technology would prevent counterfeiting, fraud, or tampering (Francis 2017).

In a perfect world, exchanges in a global currency, such as the blockchain-based crypotocurrencies, could sidestep currency fluctuations. In the real world, however, the wild value fluctuations of cryptocurrencies mean blockchain technology has a way to go before delivering on that possibility, if it ever does.

Francis, Diane. 2017. “Why the smart money is betting on blockchain.” Financial Post. http://business.financialpost.com/diane-francis/why-the-smart-money-is-betting-on-blockchain

Pepijn, Daan. 2017. “With smart controls and contracts, blockchain tech is bridging the real and virtual worlds.” The Next Web. https://thenextweb.com/contributors/2017/07/31/smart-controls-contracts-blockchain-tech-bridging-real-virtual-worlds/#.tnw_oDCnSKF2

Planning and controlling are approached with distinctive differences under control-oriented and involvement-oriented approaches to management. In the mechanistic organization, both activities tend to be lodged with management in the organizational hierarchy, often above the point in the organization where the plans are being carried out. The hierarchy plays an active role in both the planning and controlling process, and the employee is often a passive player carrying out the planning directives and the target of the control activity.

How Do Amazon, UPS, and FedEx Manage Peak Seasons?

Typically, the day after Thanksgiving (Black Friday) marks the beginning of the holiday shopping season in the United States. Holiday sales, typically defined as sales occurring in November and December, account for roughly 30 percent of annual sales for U.S. retailers (Holiday Forecasts and Historical Sales 2015). For 2016, total online sales from November 10 to December 31 amounted to 91.7 billion dollars. And the top retailers for this period were eBay, Amazon, Walmart, and Target (Tasker 2016). The growth in online sales appears inevitable, but how do the top shippers, UPS and FedEx, manage the sudden upsurge?

Not always so well. In 2013, both FedEx and UPS underestimated holiday demand, and with bad weather conditions as well, struggled to deliver packages as promised. Since then, both carriers have worked hard to keep adequate resources available to handle the end-of-year upsurge. But in 2014, UPS overcompensated and had too much capacity, once again damaging profitability (Livengood 2017).

Matching retailer expectations to reality is a challenge, and not just for the shipping companies. Although retailers would prefer to know how much to expect in sales, forecasts will be inaccurate, sometimes wildly so. In preparing its forecast for the 2017 peak season, Logistics Management examined economic factors, such as GDP, job growth, retail sales, and inventory levels. It also looked at imports. An informal survey of logistical professionals found that 93.5 percent expect the 2017 season to be the same as 2016 (35.5 percent) or more active (58 percent) (Berman 2017).

In June 2017, UPS announced that it would be adding a surcharge to some peak season rates. According to the UPS website, “During the 2016 holiday season, the company’s average daily volume exceeded 30 million packages on more than half of the available shipping days. In contrast, on an average non­peak day, the company ships more than 19 million packages” (UPS Establishes New Peak Shipping Charge 2017). The rate for the 2017 peak season would apply to select services and to oversize shipments, primarily (UPS Establishes New Peak Shipping Charge 2017). Analysts see the surcharge as a signal that UPS is the rate setter in parcel delivery. Such an assessment is not surprising given that the increase in parcel delivery as an outcome of increased e-commerce is seen as a core driver of earnings for UPS (Franck 2017).

Second-ranked FedEx, in contrast, announced that it would not follow suit but instead would “forgo most holiday surcharges on home deliveries this year” (Schlangenstein 2017). The surcharges levied by UPS are aimed primarily at small shippers, not the larger contract shippers. By not adding a seasonal surcharge, FedEx might hope to capture sales from individuals and small businesses that are deterred by the UPS surcharge (Schlangenstein 2017).

Kevin Sterling, a Seaport Global Holdings analyst, believes that FedEx has the existing capacity to absorb additional ground shipments. “[FedEx is] going to let UPS be Scrooge at Christmas” (Schlangenstein 2017). UPS already has a contract with Amazon, the de facto behemoth of online shopping, for normal shipping, leaving room for FedEx to pick up the slack during the holiday rush (Schlangenstein 2017).

In contrast, UPS reports that the additional charge is needed to offset the costs of additional resources necessary to achieve expected upsurges in capacity. UPS spokesperson Glenn Zaccara commented, “UPS’s peak season pricing positions the company to be appropriately compensated for the high value we provide at a time when the company must double daily delivery volume for six to seven consecutive weeks to meet customer demands” (Schlangenstein 2017).

With or without surcharges, price structures at both companies strive to discourage shipment of heavy, odd-sized, or oversized packages because such packages won’t flow through either company’s sorting systems and require special handling. All the same, FedEx has seen a 240 percent increase in such shipments over the last 10 years, which make up roughly 10 percent of all packages shipped using its ground services. And although FedEx is not adding a holiday surcharge, per se, it has added charges for packages that require extra handling, particularly shipments between November 20 through December 24 (Schlangenstein 2017).