The History of Management

The Early Origins of Management

(Figure) traces the development of management thought from the ancient world until the 19th century’s Industrial Revolution.

Sumer, located in what is today southern Iraq and the first urban-based civilization, contained the genesis of management. Sumer had a flourishing merchant culture in which goods such as grains, livestock, perfumes, and pottery were sold to customers. Rather than bartering (using one good or service, not money, to pay for another good or service), the ancient Sumerians used ancient clay coins to pay. The sizes and shapes of coins represented different amounts of currency and signaled the types of goods for which they could be exchanged.

What made this level of trade and economic activity possible? The introduction of writing made it possible for merchants to keep track of various trades. And the development of a basic form of coins allowed for increased trade because a person wanting to obtain a good or service no longer had to find another person who wanted exactly the good or service he produced. Coordinating the activities of those who provided goods and those who wanted to purchase them often required coordination, one of the main functions of a manager.

Two additional contributions to the early development of management came from the Middle East. The idea of written laws and commands comes from the Babylonian king Hammurabi (1810 BC–1750 BC).

The Code of Hammurabi was a listing of 282 laws that regulated a wide variety of behaviors, including business dealings, personal behavior, interpersonal relations, and punishments. Law 104 was one of the first instances of accounting and of the need for formal rules for managers and owners. The code also set wages for doctors, bricklayers, stonemasons, boatmen, herdsmen, and other labors. The code did not, however, include the concept of incentive wages because it set wages at a fixed amount. The idea of incentives would come from another, much later, Babylonian king, Nebuchadnezzar (605 BC–c. 562 BC),

who gave incentives to cloth weavers for production. Weavers were paid in food, and the more cloth they produced, the more food they were given.

Hammurabi
The Code of Hammurabi is a well-preserved ancient law code, created between 1810 BC and 1750 BC in ancient Babylon. It’s a listing of 282 laws that regulated conduct on a wide variety of behaviors, including business dealings, personal behavior, interpersonal relations, and punishments. Law 104 was one of the first instances of accounting and the need for formal rules for owners and managers. (Gabrielle Barni / flickr/ Attribution 2.0 Generic (CC BY 2.0)) 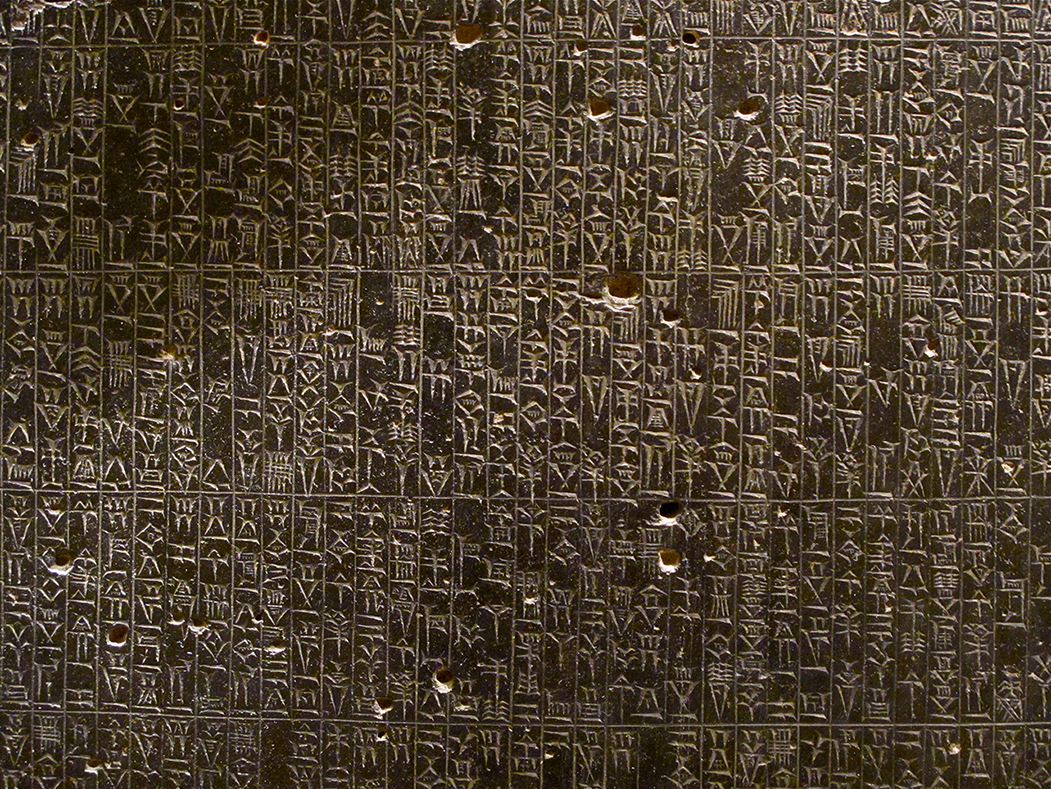 were able to build in later centuries. Although we are still uncertain about exactly how the pyramids were constructed, we have some idea that the process required a great number and wide range of slave laborers to construct them. Each laborer would have a different task. Some of the laborers were stonecutters; others were required to push and pull gigantic blocks of stone; still others were required to grease the stones to reduce friction. In this process, we see the management principals of division of labor, coordination, and specialization. These groups of workers were supervised by one individual. In figuring out how best to handle the huge numbers of workers engaged in pyramid building, the ancient Egyptians also pioneered the concept of span of control, that is, the number of workers that a manager controls directly. Anticipating research on this issue in the far, far distant future, Egyptians found the ideal number of workers per supervisor to be ten. In addition, there were various overseers, who had the responsibility to compel workers to produce.

In Asia, the Chinese began to develop the idea of bureaucracy. Bureaucracy has roots in the early dynasties but only became fully developed during the Han dynasty (206 BC–220 AD).

The idea was to train scholars in Confucian teachings and use those teachings to make decisions. Unlike modern bureaucracies, this system was not formal but relied upon the discretion of the scholars themselves. Another important development was the idea of meritocracy because selection for and then promotion within a bureaucracy was based on a test of Confucian teaching.

The Greeks (800 BC–400 BC) and Romans (500 BC–476 AD) added a number of important steps in the development of management. Although neither empire was commercially oriented, both Greeks and the Romans undertook a wide range of industrial projects, such as roads and aqueducts, and established various guilds and societies that encouraged trade. The Greeks continued to develop the idea of division of labor based on Plato’s recognition of human diversity. The great Greek philosopher Socrates stressed the development of managerial skills such as creating an atmosphere of information sharing and analysis. The Romans’ contribution to management was standardization. Because the Romans needed to administer a vast empire, they needed standardization of measures, weights, and coins. Romans also saw the birth of the corporation, in that many Roman companies sold stocks to the public.

Both Greece and Rome saw the continued pestilence of slavery, but due to economic changes that made slavery financially unfeasible, workers were gaining some degree of freedom. They still had masters who determined at what jobs they could work and how those jobs should be done. After the collapse of the Roman Empire, there was a decline in European trade. Scholars refer to this time as the Dark or Middle Ages (500 AD–1000 AD), due its location between the classical world of the Greeks and Romans and the world of the Renaissance. While there was little trade or economic development in Europe during this period, trade flourished in the Muslim and Chinese worlds. Various travelers, such as 13th-century Italian merchant and explorer Marco Polo, provided readers with tales and goods from those booming societies.

We can track the concept of management from its development under the Sumerians. The Sumerians provided the concepts of writing and record keeping that allowed for an urban economy to develop, which in turn led to the establishment of small businesses. The Egyptians helped to pioneer the ideas of specialization of labor, span of control, and hierarchy of command. Sun Tzu developed subdivisions, various rankings of authority, and coordination. The Greeks and Romans built forerunners of the modern corporation and guilds.

Hammurabi
The Code of Hammurabi was a listing of 282 laws that regulated conduct on a wide variety of behaviors, including business dealings, personnel behavior, interpersonal relations, punishments and a wide variety of other outcomes.

Nebuchadnezzar
Nebuchadnezzar (605 BC–c. 562 BC) was a pioneer in the development of incentives in that he gave greater rewards to workers who were productive.

Sun Tzu
Sun Tzu developed subdivisions, various rankings of authority, and the use of colors as coordination between units.