An important quantity for describing the dynamics of a rotating rigid body is torque. We see the application of torque in many ways in our world. We all have an intuition about torque, as when we use a large wrench to unscrew a stubborn bolt. Torque is at work in unseen ways, as when we press on the accelerator in a car, causing the engine to put additional torque on the drive train. Or every time we move our bodies from a standing position, we apply a torque to our limbs. In this section, we define torque and make an argument for the equation for calculating torque for a rigid body with fixed-axis rotation.

In everyday life, we rotate objects about an axis all the time, so intuitively we already know much about torque. Consider, for example, how we rotate a door to open it. First, we know that a door opens slowly if we push too close to its hinges; it is more efficient to rotate a door open if we push far from the hinges. Second, we know that we should push perpendicular to the plane of the door; if we push parallel to the plane of the door, we are not able to rotate it. Third, the larger the force, the more effective it is in opening the door; the harder you push, the more rapidly the door opens. The first point implies that the farther the force is applied from the axis of rotation, the greater the angular acceleration; the second implies that the effectiveness depends on the angle at which the force is applied; the third implies that the magnitude of the force must also be part of the equation. Note that for rotation in a plane, torque has two possible directions. Torque is either clockwise or counterclockwise relative to the chosen pivot point. (Figure) shows counterclockwise rotations.

Now let’s consider how to define torques in the general three-dimensional case.

is applied to a point P whose position is

relative to O ((Figure)), the torque

From the definition of the cross product, the torque

is perpendicular to the plane containing

is the angle between the vectors

. The SI unit of torque is newtons times meters, usually written as

also tells us the sign of the torque. In (Figure), the cross product

is along the positive z-axis, which by convention is a positive torque. If

is along the negative z-axis, this produces a negative torque.

If we consider a disk that is free to rotate about an axis through the center, as shown in (Figure), we can see how the angle between the radius

, the torque is maximum. The torque in (Figure) is positive because the direction of the torque by the right-hand rule is out of the page along the positive z-axis. The disk rotates counterclockwise due to the torque, in the same direction as a positive angular acceleration.

Calculating Net Torque for Rigid Bodies on a Fixed Axis

In the following examples, we calculate the torque both abstractly and as applied to a rigid body.

We first introduce a problem-solving strategy.

Four forces are shown in (Figure) at particular locations and orientations with respect to a given xy-coordinate system. Find the torque due to each force about the origin, then use your results to find the net torque about the origin.

This problem requires calculating torque. All known quantities––forces with directions and lever arms––are given in the figure. The goal is to find each individual torque and the net torque by summing the individual torques. Be careful to assign the correct sign to each torque by using the cross product of

and the force vector

to find the magnitude and

to determine the sign of the torque.
The torque from force 40 N in the first quadrant is given by

is out of the page, positive.

is into the page, so it is negative.

is out of the page, positive.

is out of the page.

The net torque is therefore

Calculating Torque on a rigid body(Figure) shows several forces acting at different locations and angles on a flywheel. We have

. Find the net torque on the flywheel about an axis through the center.

We calculate each torque individually, using the cross product, and determine the sign of the torque. Then we sum the torques to find the net torque.

makes an angle of

with the radius vector

. Taking the cross product, we see that it is out of the page and so is positive. We also see this from calculating its magnitude:

Next we look at

and the cross product is into the page so the torque is negative. Its value is

When we evaluate the torque due to

, we see that the angle it makes with

does not produce any torque on the flywheel.

We evaluate the sum of the torques:

The axis of rotation is at the center of mass of the flywheel. Since the flywheel is on a fixed axis, it is not free to translate. If it were on a frictionless surface and not fixed in place,

would cause the flywheel to translate, as well as

. Its motion would be a combination of translation and rotation.

A large ocean-going ship runs aground near the coastline, similar to the fate of the Costa Concordia, and lies at an angle as shown below. Salvage crews must apply a torque to right the ship in order to float the vessel for transport. A force of

acting at point A must be applied to right the ship. What is the torque about the point of contact of the ship with the ground ((Figure))?

gives a negative or clockwise torque.

The torque is then

What three factors affect the torque created by a force relative to a specific pivot point?

The moment of inertia of the wheels is reduced, so a smaller torque is needed to accelerate them.

Can a single force produce a zero torque?

Can a set of forces have a net torque that is zero and a net force that is not zero?

Can a set of forces have a net force that is zero and a net torque that is not zero? 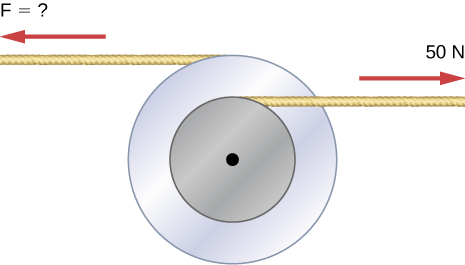 The cylindrical head bolts on a car are to be tightened with a torque of 62.0 N

. If a mechanic uses a wrench of length 20 cm, what perpendicular force must he exert on the end of the wrench to tighten a bolt correctly?

(a) When opening a door, you push on it perpendicularly with a force of 55.0 N at a distance of 0.850 m from the hinges. What torque are you exerting relative to the hinges? (b) Does it matter if you push at the same height as the hinges? There is only one pair of hinges.

; b. It does not matter at what height you push.
[/hidden-answer]

What hanging mass must be placed on the cord to keep the pulley from rotating (see the following figure)? The mass on the frictionless plane is 5.0 kg. The inner radius of the pulley is 20 cm and the outer radius is 30 cm. 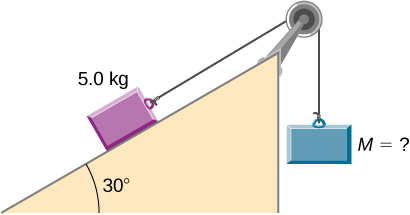 A simple pendulum consists of a massless tether 50 cm in length connected to a pivot and a small mass of 1.0 kg attached at the other end. What is the torque about the pivot when the pendulum makes an angle of

Calculate the torque about the z-axis that is out of the page at the origin in the following figure, given that 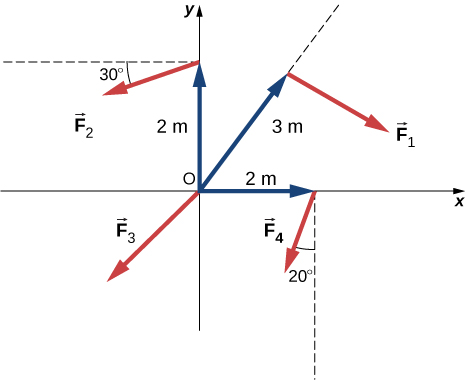 with respect to the ground (see the following figure). The pivot is located at 6.0 m. What magnitude of force needs to be applied perpendicular to the seesaw at the raised end so as to allow the seesaw to barely start to rotate? 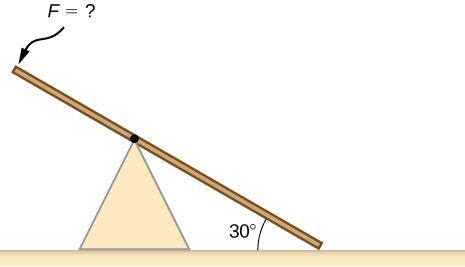 A pendulum consists of a rod of mass 1 kg and length 1 m connected to a pivot with a solid sphere attached at the other end with mass 0.5 kg and radius 30 cm. What is the torque about the pivot when the pendulum makes an angle of

is required to raise a drawbridge (see the following figure). What is the tension necessary to produce this torque? Would it be easier to raise the drawbridge if the angle

were larger or smaller? 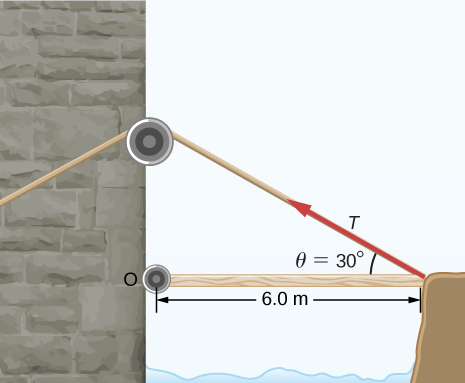 A horizontal beam of length 3 m and mass 2.0 kg has a mass of 1.0 kg and width 0.2 m sitting at the end of the beam (see the following figure). What is the torque of the system about the support at the wall? 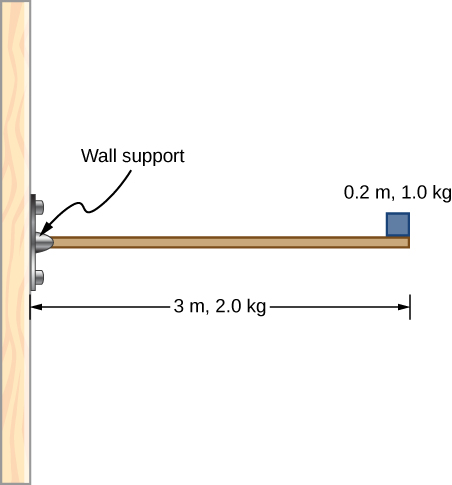 What force must be applied to end of a rod along the x-axis of length 2.0 m in order to produce a torque on the rod about the origin of

What is the torque about the origin of the force

if it is applied at the point whose position is: