Sound, like all waves, travels at a certain speed and has the properties of frequency and wavelength. You can observe direct evidence of the speed of sound while watching a fireworks display ((Figure)). You see the flash of an explosion well before you hear its sound and possibly feel the pressure wave, implying both that sound travels at a finite speed and that it is much slower than light.

The difference between the speed of light and the speed of sound can also be experienced during an electrical storm. The flash of lighting is often seen before the clap of thunder. You may have heard that if you count the number of seconds between the flash and the sound, you can estimate the distance to the source. Every five seconds converts to about one mile. The velocity of any wave is related to its frequency and wavelength by

where v is the speed of the wave, f is its frequency, and

Speed of Sound in Various Media

where the restoring force is the tension in the string

and the linear density

is the inertial property. In a fluid, the speed of sound depends on the bulk modulus and the density,

The speed of sound in a solid the depends on the Young’s modulus of the medium and the density,

In an ideal gas (see The Kinetic Theory of Gases in the second volume of this text), the equation for the speed of sound is

is the adiabatic index,

is the gas constant,

where the temperature in the first equation (denoted as

) is in kelvins. The speed of sound in gases is related to the average speed of particles in the gas,

is the Boltzmann constant

and m is the mass of each (identical) particle in the gas. Note that v refers to the speed of the coherent propagation of a disturbance (the wave), whereas

describes the speeds of particles in random directions. Thus, it is reasonable that the speed of sound in air and other gases should depend on the square root of temperature. While not negligible, this is not a strong dependence. At

increase. (Figure) shows how a bat uses the speed of sound to sense distances.

Derivation of the Speed of Sound in Air

Consider fluid flow through a pipe with cross-sectional area A ((Figure)). The mass in a small volume of length x of the pipe is equal to the density times the volume, or

The mass flow rate is

Now consider a sound wave moving through a parcel of air. A parcel of air is a small volume of air with imaginary boundaries ((Figure)). The density, temperature, and velocity on one side of the volume of the fluid are given as

and on the other side are

This equation can be simplified, noting that the area cancels and considering that the multiplication of two infinitesimals is approximately equal to zero:

The net force on the volume of fluid ((Figure)) equals the sum of the forces on the left face and the right face:

The acceleration is the force divided by the mass and the mass is equal to the density times the volume,

From the continuity equation

Consider a sound wave moving through air. During the process of compression and expansion of the gas, no heat is added or removed from the system. A process where heat is not added or removed from the system is known as an adiabatic system. Adiabatic processes are covered in detail in The First Law of Thermodynamics, but for now it is sufficient to say that for an adiabatic process,

where p is the pressure, V is the volume, and gamma

is a constant that depends on the gas. For air,

. The density equals the number of moles times the molar mass divided by the volume, so the volume is equal to

Taking the natural logarithm of both sides yields

Differentiating with respect to the density, the equation becomes

If the air can be considered an ideal gas, we can use the ideal gas law:

Here M is the molar mass of air:

Since the speed of sound is equal to

, the speed is equal to

Note that the velocity is faster at higher temperatures and slower for heavier gases. For air,

If the temperature is

the speed of sound is

The equation for the speed of sound in air

can be simplified to give the equation for the speed of sound in air as a function of absolute temperature:

One of the more important properties of sound is that its speed is nearly independent of the frequency. This independence is certainly true in open air for sounds in the audible range. If this independence were not true, you would certainly notice it for music played by a marching band in a football stadium, for example. Suppose that high-frequency sounds traveled faster—then the farther you were from the band, the more the sound from the low-pitch instruments would lag that from the high-pitch ones. But the music from all instruments arrives in cadence independent of distance, so all frequencies must travel at nearly the same speed. Recall that

In a given medium under fixed conditions, v is constant, so there is a relationship between f and

the higher the frequency, the smaller the wavelength ((Figure)).

Calculate the wavelengths of sounds at the extremes of the audible range, 20 and 20,000 Hz, in

air. (Assume that the frequency values are accurate to two significant figures.)

To find wavelength from frequency, we can use

Because the product of f multiplied by

equals a constant, the smaller f is, the larger

must be, and vice versa.

must change. That is, because

, the higher the speed of a sound, the greater its wavelength for a given frequency.

Although sound waves in a fluid are longitudinal, sound waves in a solid travel both as longitudinal waves and transverse waves. Seismic waves, which are essentially sound waves in Earth’s crust produced by earthquakes, are an interesting example of how the speed of sound depends on the rigidity of the medium. Earthquakes produce both longitudinal and transverse waves, and these travel at different speeds. The bulk modulus of granite is greater than its shear modulus. For that reason, the speed of longitudinal or pressure waves (P-waves) in earthquakes in granite is significantly higher than the speed of transverse or shear waves (S-waves). Both types of earthquake waves travel slower in less rigid material, such as sediments. P-waves have speeds of 4 to 7 km/s, and S-waves range in speed from 2 to 5 km/s, both being faster in more rigid material. The P-wave gets progressively farther ahead of the S-wave as they travel through Earth’s crust. The time between the P- and S-waves is routinely used to determine the distance to their source, the epicenter of the earthquake. Because S-waves do not pass through the liquid core, two shadow regions are produced ((Figure)).

As sound waves move away from a speaker, or away from the epicenter of an earthquake, their power per unit area decreases. This is why the sound is very loud near a speaker and becomes less loud as you move away from the speaker. This also explains why there can be an extreme amount of damage at the epicenter of an earthquake but only tremors are felt in areas far from the epicenter. The power per unit area is known as the intensity, and in the next section, we will discuss how the intensity depends on the distance from the source.

How do sound vibrations of atoms differ from thermal motion?

When sound passes from one medium to another where its propagation speed is different, does its frequency or wavelength change? Explain your answer briefly.

A popular party trick is to inhale helium and speak in a high-frequency, funny voice. Explain this phenomenon.

You may have used a sonic range finder in lab to measure the distance of an object using a clicking sound from a sound transducer. What is the principle used in this device?

The transducer sends out a sound wave, which reflects off the object in question and measures the time it takes for the sound wave to return. Since the speed of sound is constant, the distance to the object can found by multiplying the velocity of sound by half the time interval measured.

When poked by a spear, an operatic soprano lets out a 1200-Hz shriek. What is its wavelength if the speed of sound is 345 m/s?

What frequency sound has a 0.10-m wavelength when the speed of sound is 340 m/s?

(a) What is the speed of sound in a medium where a 100-kHz frequency produces a 5.96-cm wavelength? (b) Which substance in (Figure) is this likely to be?

Show that the speed of sound in

as claimed in the text.

Air temperature in the Sahara Desert can reach

). What is the speed of sound in air at that temperature?

Dolphins make sounds in air and water. What is the ratio of the wavelength of a sound in air to its wavelength in seawater? Assume air temperature is

A sonar echo returns to a submarine 1.20 s after being emitted. What is the distance to the object creating the echo? (Assume that the submarine is in the ocean, not in fresh water.)

(a) If a submarine’s sonar can measure echo times with a precision of 0.0100 s, what is the smallest difference in distances it can detect? (Assume that the submarine is in the ocean, not in fresh water.) (b) Discuss the limits this time resolution imposes on the ability of the sonar system to detect the size and shape of the object creating the echo.

Ultrasonic sound waves are often used in methods of nondestructive testing. For example, this method can be used to find structural faults in a steel I-beams used in building. Consider a 10.00 meter long, steel I-beam with a cross-section shown below. The weight of the I-beam is 3846.50 N. What would be the speed of sound through in the I-beam?

A physicist at a fireworks display times the lag between seeing an explosion and hearing its sound, and finds it to be 0.400 s. (a) How far away is the explosion if air temperature is

and if you neglect the time taken for light to reach the physicist? (b) Calculate the distance to the explosion taking the speed of light into account. Note that this distance is negligibly greater.

During a 4th of July celebration, an M80 firework explodes on the ground, producing a bright flash and a loud bang. The air temperature of the night air is

between the two observers? 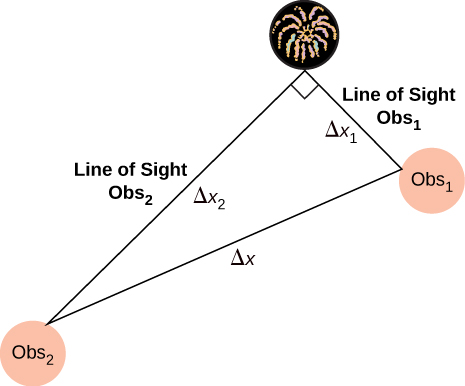 The density of a sample of water is

and the bulk modulus is

What is the speed of sound through the sample?

Suppose a bat uses sound echoes to locate its insect prey, 3.00 m away. (See (Figure).) (a) Calculate the echo times for temperatures of

(b) What percent uncertainty does this cause for the bat in locating the insect? (c) Discuss the significance of this uncertainty and whether it could cause difficulties for the bat. (In practice, the bat continues to use sound as it closes in, eliminating most of any difficulties imposed by this and other effects, such as motion of the prey.)

; c. This uncertainty could definitely cause difficulties for the bat, if it didn’t continue to use sound as it closed in on its prey. A 5% uncertainty could be the difference between catching the prey around the neck or around the chest, which means that it could miss grabbing its prey.
[/hidden-answer]