4 Motion in Two and Three Dimensions

4.5 Relative Motion in One and Two Dimensions

Relative Motion in One Dimension

We introduce relative motion in one dimension first, because the velocity vectors simplify to having only two possible directions. Take the example of the person sitting in a train moving east. If we choose east as the positive direction and Earth as the reference frame, then we can write the velocity of the train with respect to the Earth as

east, where the subscripts TE refer to train and Earth. Let’s now say the person gets up out of /her seat and walks toward the back of the train at 2 m/s. This tells us she has a velocity relative to the reference frame of the train. Since the person is walking west, in the negative direction, we write her velocity with respect to the train as

We can add the two velocity vectors to find the velocity of the person with respect to Earth. This relative velocity is written as

Adding the vectors, we find

so the person is moving 8 m/s east with respect to Earth. Graphically, this is shown in (Figure).

We can now apply these concepts to describing motion in two dimensions. Consider a particle P and reference frames S and

as shown in (Figure). The position of the origin of

as measured in S is

the position of P as measured in

and the position of P as measured in S is

From (Figure) we see that

The relative velocities are the time derivatives of the position vectors. Therefore,

plus the velocity of

We can extend (Figure) to any number of reference frames. For particle P with velocities

We can also see how the accelerations are related as observed in two reference frames by differentiating (Figure):

We see that if the velocity of

relative to S is a constant, then

This says the acceleration of a particle is the same as measured by two observers moving at a constant velocity relative to each other.

Motion of a Car Relative to a Truck

The velocity of the car with respect to Earth is

The velocity of the truck with respect to Earth is

Using the velocity addition rule, the relative motion equation we are seeking is

The vector diagram of this equation is shown in (Figure).

We can now solve for the velocity of the car with respect to the truck:

Drawing a vector diagram showing the velocity vectors can help in understanding the relative velocity of the two objects.

A boat heads north in still water at 4.5 m/s directly across a river that is running east at 3.0 m/s. What is the velocity of the boat with respect to Earth?

We have right triangle geometry shown in Figure 04_05_BoatRiv_img. Solving for 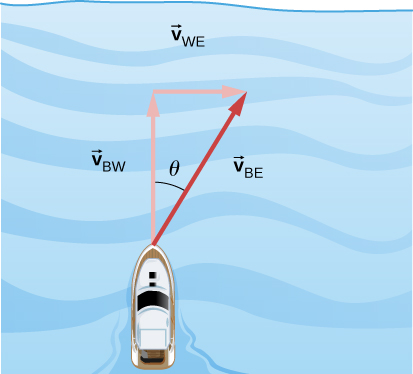 Flying a Plane in a Wind

A pilot must fly his plane due north to reach his destination. The plane can fly at 300 km/h in still air. A wind is blowing out of the northeast at 90 km/h. (a) What is the speed of the plane relative to the ground? (b) In what direction must the pilot head her plane to fly due north?

The vector equation is

where P = plane, A = air, and G = ground. From the geometry in (Figure), we can solve easily for the magnitude of the velocity of the plane with respect to the ground and the angle of the plane’s heading,

Substituting into the equation of motion, we obtain

What frame or frames of reference do you use instinctively when driving a car? When flying in a commercial jet?

A basketball player dribbling down the court usually keeps his eyes fixed on the players around him. He is moving fast. Why doesn’t he need to keep his eyes on the ball?

If he is going to pass the ball to another player, he needs to keep his eyes on the reference frame in which the other players on the team are located.

If someone is riding in the back of a pickup truck and throws a softball straight backward, is it possible for the ball to fall straight down as viewed by a person standing at the side of the road? Under what condition would this occur? How would the motion of the ball appear to the person who threw it?

The hat of a jogger running at constant velocity falls off the back of his head. Draw a sketch showing the path of the hat in the jogger’s frame of reference. Draw its path as viewed by a stationary observer. Neglect air resistance. 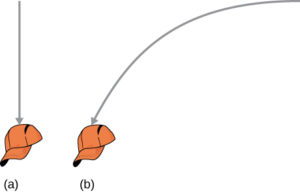 The coordinate axes of the reference frame

remain parallel to those of S, as

moves away from S at a constant velocity

(a) If at time t = 0 the origins coincide, what is the position of the origin

in the S frame as a function of time? (b) How is particle position for

as measured in S and

respectively, related? (c) What is the relationship between particle velocities

(d) How are accelerations

, d. The accelerations are the same.

The coordinate axes of the reference frame

remain parallel to those of S, as

moves away from S at a constant velocity

. (a) If at time t = 0 the origins coincide, what is the position of origin

in the S frame as a function of time? (b) How is particle position for

, as measured in S and

respectively, related? (c) What is the relationship between particle velocities

(d) How are accelerations

The velocity of a particle in reference frame A is

What is the velocity of the particle in reference frame C?

Raindrops fall vertically at 4.5 m/s relative to the earth. What does an observer in a car moving at 22.0 m/s in a straight line measure as the velocity of the raindrops?

velocity of seagull with respect to still air

A ship sets sail from Rotterdam, heading due north at 7.00 m/s relative to the water. The local ocean current is 1.50 m/s in a direction

north of east. What is the velocity of the ship relative to Earth?

Take the positive direction to be the same direction that the river is flowing, which is east. S = shore/Earth, W = water, and B = boat. 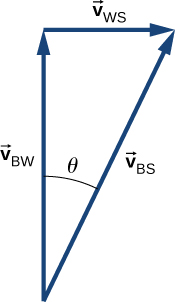 A small plane flies at 200 km/h in still air. If the wind blows directly out of the west at 50 km/h, (a) in what direction must the pilot head her plane to move directly north across land and (b) how long does it take her to reach a point 300 km directly north of her starting point?

A cyclist traveling southeast along a road at 15 km/h feels a wind blowing from the southwest at 25 km/h. To a stationary observer, what are the speed and direction of the wind?

so the direction of the wind is 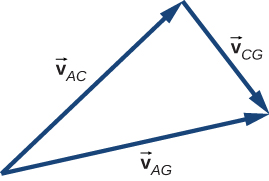 A river is moving east at 4 m/s. A boat starts from the dock heading

north of west at 7 m/s. If the river is 1800 m wide, (a) what is the velocity of the boat with respect to Earth and (b) how long does it take the boat to cross the river?

A Formula One race car is traveling at 89.0 m/s along a straight track enters a turn on the race track with radius of curvature of 200.0 m. What centripetal acceleration must the car have to stay on the track?

A particle travels in a circular orbit of radius 10 m. Its speed is changing at a rate of

at an instant when its speed is 40.0 m/s. What is the magnitude of the acceleration of the particle?

The driver of a car moving at 90.0 km/h presses down on the brake as the car enters a circular curve of radius 150.0 m. If the speed of the car is decreasing at a rate of 9.0 km/h each second, what is the magnitude of the acceleration of the car at the instant its speed is 60.0 km/h?

An elephant is located on Earth’s surface at a latitude

Calculate the centripetal acceleration of the elephant resulting from the rotation of Earth around its polar axis. Express your answer in terms of

of Earth, and time T for one rotation of Earth. Compare your answer with g for 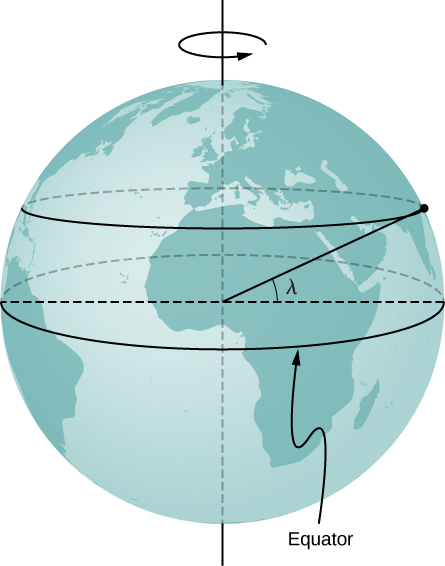 The velocity of the body is

(a) What is the proton’s total acceleration at t = 5.0 s? (b) At what time does the expression for the velocity become unphysical?

A propeller blade at rest starts to rotate from t = 0 s to t = 5.0 s with a tangential acceleration of the tip of the blade at

with respect to the tangent to the circle of revolution directed inward.

A particle’s centripetal acceleration is

A particle located initially at

undergoes a displacement of

What is the final position of the particle?

The position of a particle is given by

(a) What are the particle’s velocity and acceleration as functions of time? (b) What are the initial conditions to produce the motion?

A spaceship is traveling at a constant velocity of

when its rockets fire, giving it an acceleration of

What is its velocity

s after the rockets fire?

A crossbow is aimed horizontally at a target 40 m away. The arrow hits 30 cm below the spot at which it was aimed. What is the initial velocity of the arrow?

A long jumper can jump a distance of 8.0 m when he takes off at an angle of

with respect to the horizontal. Assuming he can jump with the same initial speed at all angles, how much distance does he lose by taking off at

On planet Arcon, the maximum horizontal range of a projectile launched at 10 m/s is 20 m. What is the acceleration of gravity on this planet?

to the horizontal. If he lands at a horizontal distance of 45.0 m and 20 m below his launch point, what is his initial speed?

A geosynchronous satellite orbits Earth at a distance of 42,250.0 km and has a period of 1 day. What is the centripetal acceleration of the satellite?

World’s Longest Par 3. The tee of the world’s longest par 3 sits atop South Africa’s Hanglip Mountain at 400.0 m above the green and can only be reached by helicopter. The horizontal distance to the green is 359.0 m. Neglect air resistance and answer the following questions. (a) If a golfer launches a shot that is

with respect to the horizontal, what initial velocity must she give the ball? (b) What is the time to reach the green?

to the horizontal, the ball just clears the 3-m-high crossbar of the goalposts 45.7 m away. (a) What is the maximum speed the kicker can impart to the football? (b) In addition to clearing the crossbar, the football must be high enough in the air early during its flight to clear the reach of the onrushing defensive lineman. If the lineman is 4.6 m away and has a vertical reach of 2.5 m, can he block the 45.7-m field goal attempt? (c) What if the lineman is 1.0 m away? 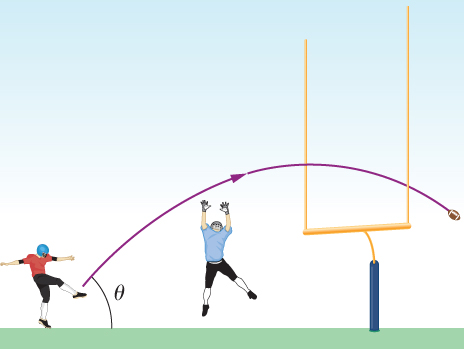 A truck is traveling east at 80 km/h. At an intersection 32 km ahead, a car is traveling north at 50 km/h. (a) How long after this moment will the vehicles be closest to each other? (b) How far apart will they be at that point?

reference frame
coordinate system in which the position, velocity, and acceleration of an object at rest or moving is measured