Most examples dealt with so far in this book, particularly those using batteries, have constant-voltage sources. Thus, once the current is established, it is constant. Direct current (dc) is the flow of electric charge in only one direction. It is the steady state of a constant-voltage circuit.

Most well-known applications, however, use a time-varying voltage source. Alternating current (ac) is the flow of electric charge that periodically reverses direction. An ac is produced by an alternating emf, which is generated in a power plant, as described in Induced Electric Fields. If the ac source varies periodically, particularly sinusoidally, the circuit is known as an ac circuit. Examples include the commercial and residential power that serves so many of our needs.

The ac voltages and frequencies commonly used in businesses and homes vary around the world. In a typical house, the potential difference between the two sides of an electrical outlet alternates sinusoidally with a frequency of 60 or 50 Hz and an amplitude of 156 or 311 V, depending on whether you live in the United States or Europe, respectively. Most people know the potential difference for electrical outlets is 120 V or 220 V in the US or Europe, but as explained later in the chapter, these voltages are not the peak values given here but rather are related to the common voltages we see in our electrical outlets. (Figure) shows graphs of voltage and current versus time for typical dc and ac power in the United States.

where v is the voltage at time t,

is the peak voltage, and

is the angular frequency in radians per second. For a typical house in the United States,

For this simple resistance circuit,

, so the ac current, meaning the current that fluctuates sinusoidally with time at a fixed frequency, is

where i is the current at time t and

is the peak current and is equal to

. For this example, the voltage and current are said to be in phase, meaning that their sinusoidal functional forms have peaks, troughs, and nodes in the same place. They oscillate in sync with each other, as shown in (Figure)(b). In these equations, and throughout this chapter, we use lowercase letters (such as i) to indicate instantaneous values and capital letters (such as I) to indicate maximum, or peak, values.

The potential difference V between the terminals of an ac voltage source fluctuates, so the source and the resistor have ac sine waves on top of each other. The mathematical expression for v is given by 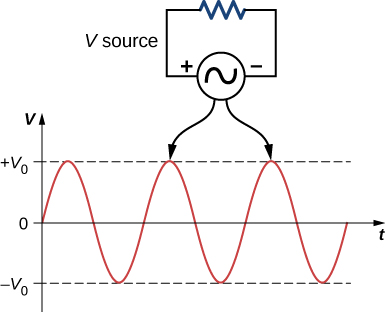 Current in the resistor alternates back and forth just like the driving voltage, since

. If the resistor is a fluorescent light bulb, for example, it brightens and dims 120 times per second as the current repeatedly goes through zero. A 120-Hz flicker is too rapid for your eyes to detect, but if you wave your hand back and forth between your face and a fluorescent light, you will see the stroboscopic effect of ac.

Check Your Understanding If a European ac voltage source is considered, what is the time difference between the zero crossings on an ac voltage-versus-time graph?

What is the relationship between frequency and angular frequency?

Write an expression for the output voltage of an ac source that has an amplitude of 12 V and a frequency of 200 Hz.

direct current (dc)
flow of electric charge in only one direction